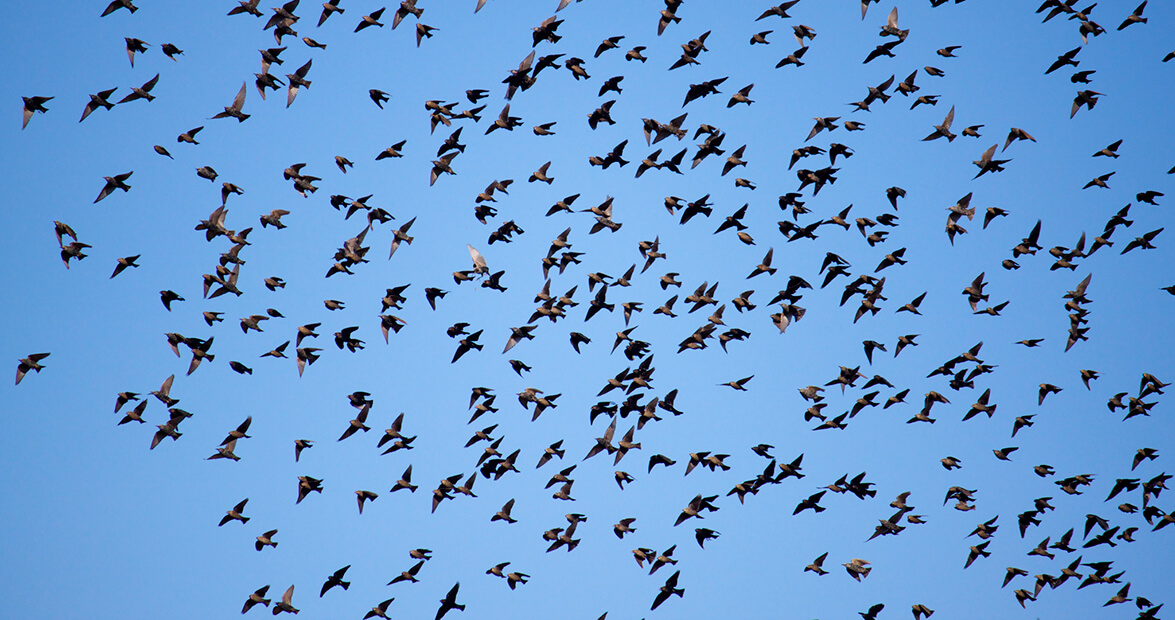 At first, there were just a few birds.

Gliding overhead, riding the thermals, calling to one another from lampposts and treetops. “The first year, we thought, ‘Well, there’s a bunch of birds, and that’s not unusual,’” says Susan Rountree, who grew up in Scotland Neck, in Halifax County.

In the spring of 1969, blackbirds, cowbirds, and common grackles swooped in from Canada and occupied Scotland Neck. Come summer, they left, but as the winter deepened, the number of birds grew. “I guess they had some signal to each other, and they came from miles around,” Rountree says. “There’s nothing you can do to stop 11 million blackbirds.”

Eleven million, three million, six million: The estimates vary, depending on whom you ask — residents, newspaper reporters, tourists, the U.S. Public Health Service. But really, on sunny days, when the skies would darken and people outside would duck beneath their umbrellas and the town’s women would grab their laundry off the clothesline, who could count them all?

“There’s nothing quite in the world to describe six million blackbirds,” says Harold George Scott, who was a federal health investigator assigned to the case. He later wrote a mystery based on the birds. “It defies the imagination of humankind.”

The flocks roosted near the Pine Forest neighborhood on the town’s north side, just two blocks from where a future mayor, Leonard Bunting, lived. “Oh, the noise was terrible,” he says. “The town tried everything it possibly could to get them to leave.”

As news of the invasion made national headlines, letters arrived at Mayor Ferd Harrison’s office from concerned people who had their own ideas about how to eliminate the birds. 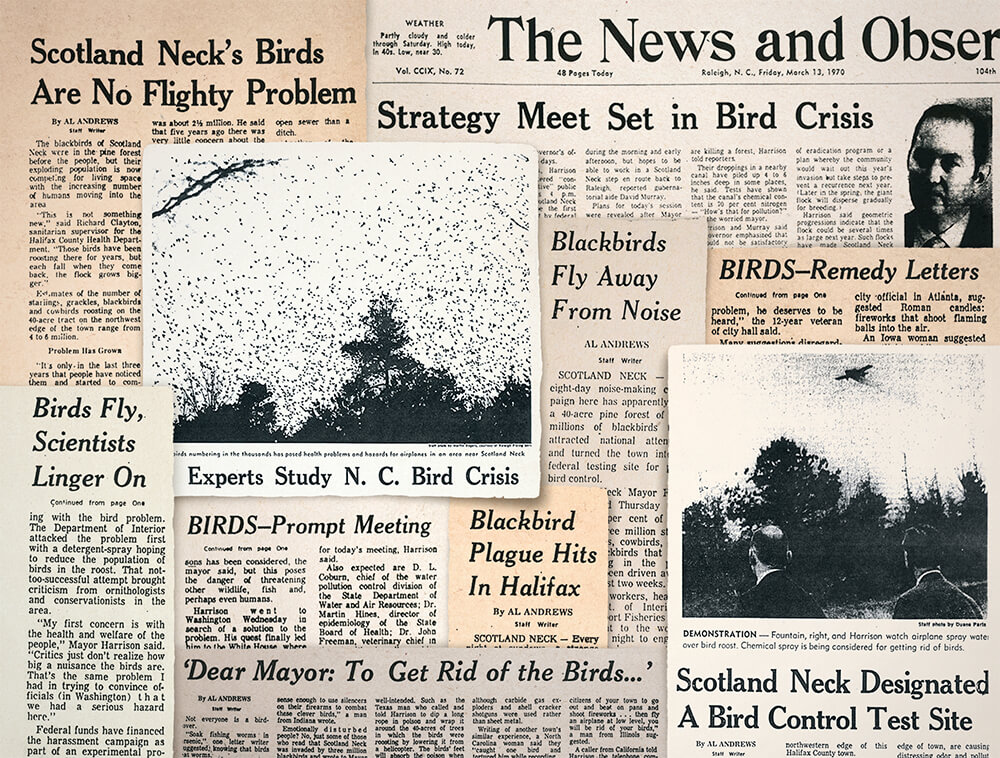 As the people of Scotland Neck tried to make sense of their new, winged neighbors, the birds made headlines.

Some suggestions were reasonable, considering the circumstances: “Get everyone in town to go out in the yard and beat pans and shoot off fireworks,” wrote one person from Oregon, Illinois.

But others, like a letter-writer from Mullins, South Carolina, failed to grasp the magnitude of the event: “Get an owl.”

Several tried to be funny. “Trap the birds and clean like chicken,” wrote someone from Shreveport, Louisiana. “Simmer all day. Tastes like chicken.”

The tone of other letters was conspiratorial: “Apparently, a solid wall of deadly atomic radiation has built up somewhere along the line,” advised a citizen of Kansas City, Missouri. “They are warning us that there is trouble somewhere nearby.”

Like the birds, tourists also converged on Scotland Neck. Initially, they were endearing — “People came from long distances and enjoyed seeing the birds,” Bunting says — but eventually, the crowds became tiresome.

“There’s nothing quite in the world to describe six million blackbirds.”

“At first, people thought, ‘This is really cool. We have a tourist attraction,’” says Rountree, who later based a short story on the incursion. But then, even the Freez, a popular diner famous for its broasted chicken and thick milkshakes, became overrun with out-of-towners. A newspaper headline announced, “Scotland Neck plagued by birds and tourists.” Like the birds, the number of tourists was just too much.

The forest also became overcrowded. Some birds were forced to roost on the ground among the droppings, which in some places piled six inches deep. “Oh, lots of them died,” Rountree adds. “You’d go back there, and it was like Alfred Hitchcock and The Birds.”

Weakened, some birds “got hungry, got a chill,” Scott says, a hint of sadness and empathy in his voice. “They fell off the trees and died.”

Local and state bird experts were stumped, so Scotland Neck officials asked the federal government to intervene, including congressmen, the military, and health officials. Scott, who worked for the U.S. Public Health Service, had been involved in 100 major investigations, he says, and “this was one of the best. It was a very fascinating event.”

Some town residents had grown ill with high fever, headache, chills, muscle and chest pain, weakness, and “extreme bodily discomfort” that Scott says was likely caused by the bacteria Coxiella, which came from the birds, and is treatable with antibiotics.

With townspeople falling ill, tourists crowding the Freez, and life in Scotland Neck generally becoming inconvenient, town officials decided to unveil their ultimate weapon against the birds: water. The town hired a pilot to fly a prop plane over the birds’ roosting grounds and spray water on them.

“The thought was it would give them a chill, and they would catch pneumonia and die,” Scott says. Although federal officials weren’t in favor of that approach, “we didn’t see how we could oppose it. If it did any good or not, I never could tell.”

Finally, in March of 1970, federal officials and town residents embarked on an eight-day noise-making campaign. They blasted bird distress calls from loudspeakers that had been mounted on cars. They banged pots and pans. But the birds stayed.

Then, without warning, the birds left. “I think one day they decided it was time to move on,” Bunting says. “And we were delighted.”

Although the birds had become a menace, they had an inherent grace nonetheless, Rountree says. “To watch them fly around, not as scattered birds, but like this living, breathing being, it was beautiful to watch,” she says. “They were just birds.”