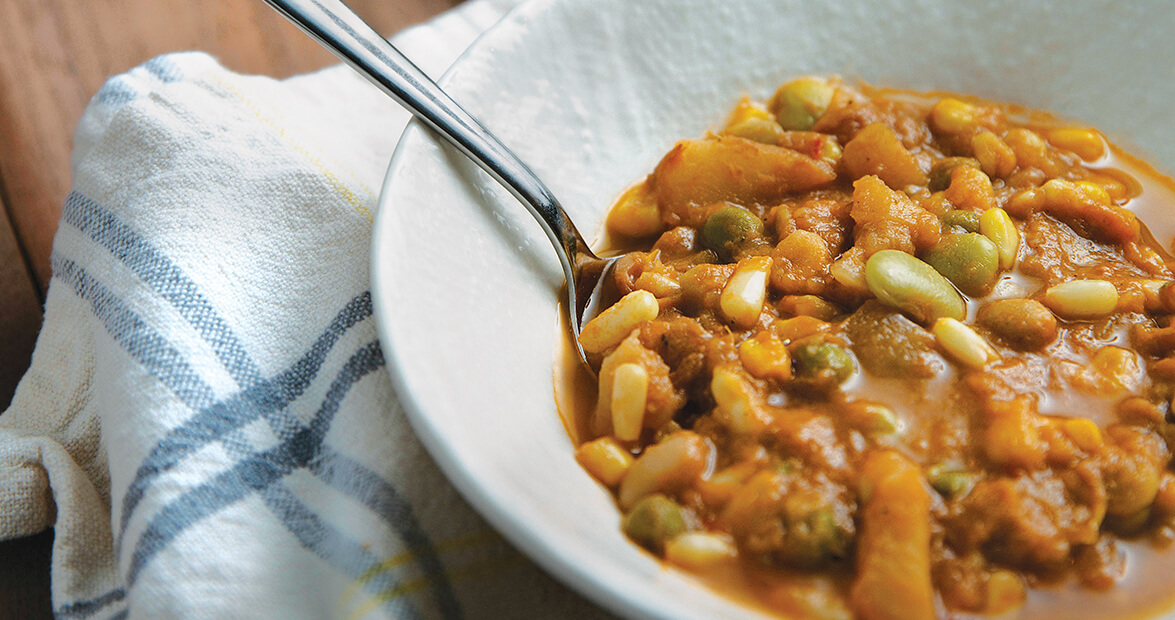 I know only two things about Brunswick stew. One is that I’m fairly certain I have in my house a recipe that, if I remember correctly, begins, “Catch and skin 50 squirrels.”

It is not. It is in the “Fish and Game Roundup” section of an ancient edition of Farm Journal’s Country Cookbook, which also contains a recipe for roast raccoon. “Clean, dress, and cut up squirrels and chickens,” the stew recipe reads. “If your folks are not ardent squirrel hunters, increase the number of chickens.”

The other thing I know about Brunswick stew is that I want to meet the men and women of the Elon Exchange Club, who each winter stand a wooden sign out in front of the Elon fire station that reads:

There are signs like this all over North Carolina, of course. Churches and Lions Clubs and various service organizations and maybe even eager (and ardent) neighborhood associations engage in plenty of fund-raising via Brunswick stew. My fascination, though, springs from the sign itself, with its hand-painted black and red letters, and the long history they suggest: years of sitting up all night, stirring the pot until somebody deems things ready, or close; years of old men telling old stories again and again until somebody says, “Quit it. You already told that one three times.”

I’ve driven by the sign for almost 20 years. For whatever reason, I’ve never stopped. Never sought out the Elon Exchange Hut. And I’m a person inclined to like Brunswick stew, which, aside from the squirrel question, seems essentially to be the marriage of barbecue and chili. 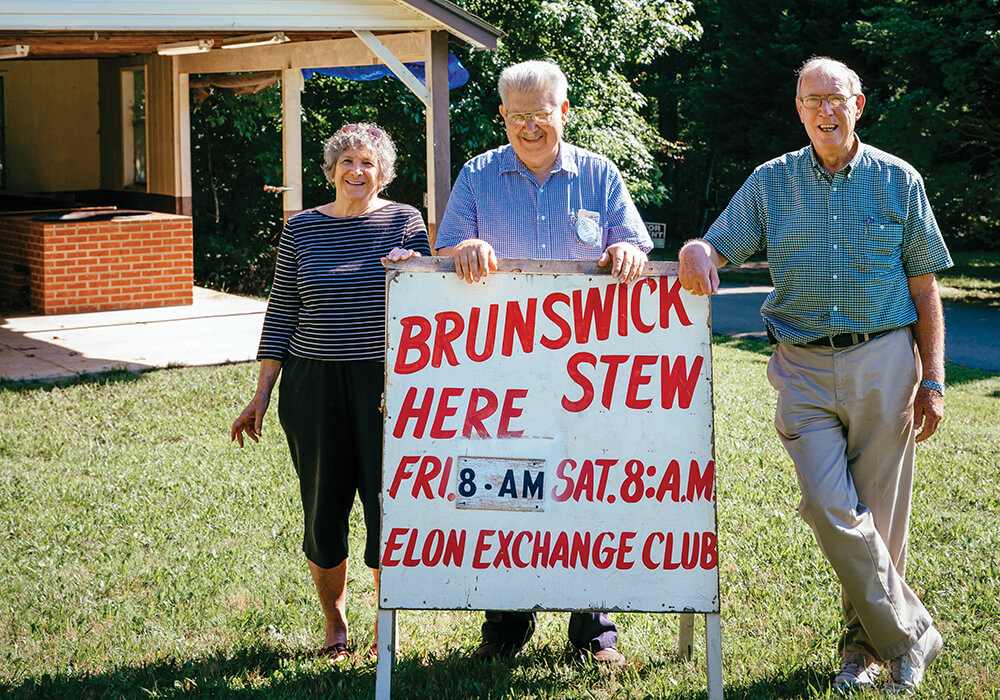 Looking for Brunswick stew? Look for the sign in front of the Elon Exchange Hut … and the club’s members: (from left) Rose Ann McLelland, Jim Starr, and Charlie Vitou. photograph by Geoff Wood

He would be glad to let me take a peek behind the curtain, Charlie Vitou tells me by email, and in person he is glad, all but jogging out from the Exchange Hut to meet me. He’s a tall man in a yellow polo shirt and pressed pants, possessed of a quick smile and a way of making you feel like you’ve been friends for years, or like he maybe knows your dad. The hut is really just a house, a meeting room for the Elon Exchange Club with a kitchen attached to it, but the shelter is where the action is: Vitou pulls back a tarp to show me the cooker, which is a thing of such beauty that mainly all I can do is stare. “There’s three 300-quart pots here,” Vitou says, and it feels almost like I’m in contact with the infinite. The cast-iron kettles are vast, sunk into a waist-high brick cooker with big gas burners underneath, like camp stoves all grown up. The stew sign leans against one wall. Metal folding chairs are stacked to the side.

Vitou pulls a wooden pole down from a shelf, five feet long and about as big around as a baseball bat. Affixed to the end is a flat board with fat holes drilled in it. There’s a crosspiece, a handle, about midway down. “Stir a few hours with this?” he says. “That’s R-O-U-G-H, tough, is what that is.” He hands me a canoe oar. “We used to use these, too,” he says.

And then he walks me back closer to the entrance of the storage room — which smells and looks like my grandfather’s old workroom, tools and wood and dust and everything hanging from the exact right hook — to show me the stainless steel paddles the Exchange Club had fabricated a few years back. Think: a giant tennis racket made from angle iron, curved to fit the kettle, with a motor on top. It’s genius.

Vitou lets me see their recipe, which hangs on a bulletin board and which needs not one squirrel: It calls for 180 pounds of lean beef and nine turkeys, and then works its way through several hundred pounds of corn and peas and beans and limas, as well as 400 or more pounds of potatoes. He introduces me to Jim Starr, who every Christmas makes 100 lemon chess pies with Vitou. “Is that also for fund-raising?” I ask. “Oh, no,” Vitou says. “We just give those away. To folks in need, shut-ins, people who could use a little something in their lives.”

The cast-iron kettles are vast, like camp stoves all grown up.

I stick around for the meeting, which begins with Vitou ringing a bell with a gavel. We say the Pledge of Allegiance. The Elon Exchange Club — founded in 1949, the third-oldest in North Carolina — gives the Family Center of Alamance, a child-abuse prevention and treatment organization, a large check, the proceeds from last year’s stew sale. There are copies of treaties and surrenders and the U.S. Constitution laminated to plywood and hanging on the walls. Starr has made dinner: mashed potatoes and salmon croquettes and bread and butter and salad and sweet tea. I had no idea I was going to get fed. I had no idea I was going to be transported so efficiently back to my own childhood, to Cub Scout Quonset huts and parish suppers and everyone so kind, so glad to meet you, so pleased you came.

Some of the Exchangers have lived in Elon all their lives. Some, like Vitou, are from farther-flung places. He’s from Rowland, “which was the last stoplight on little 301 before South of the Border,” he tells me. “The town of a thousand friendly faces.”

There are only a dozen or so Exchange Club faces here tonight, but they’re all friendly. I keep thinking, Who’s left in this world this nice? Who are these people? My image of everybody staying up all night is a little off, more than one of them tell me: They got tired, made a change. This past year they started at 7 in the morning, instead, and cooked all day.

Though the stew sale takes place each March, they’ve got a few quarts left in a big white standing freezer, and they give one to me. Back in my own kitchen, I heat it up and sit down at the table. “The Brunswick stew goes by different names,” my Farm Journal cookbook says. “In some Carolina communities, it is called Squirrel Muddle.” The Elon Exchange Club’s variant is no muddle: It tastes like folks trying to do right. It tastes like hand-painted capital letters from some other time and place. It tastes like those giant cast-iron pots, like North Carolina, like home.

The Elon Exchange Club sells its Brunswick stew at the Exchange Hut at 600 West Haggard Avenue in Elon, and at the Elon fire station on South Williamson Avenue.