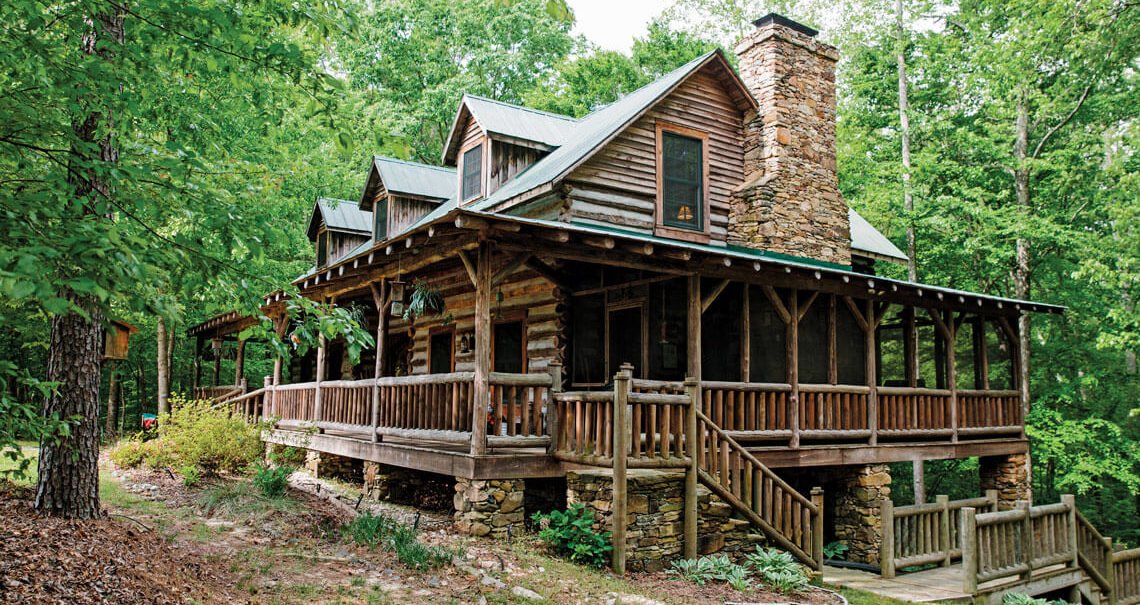 A forged wrought-iron sign arcing over the dirt road leading to Luna Pointer Hollett’s cabin in Semora offers a hint to what’s in store: “Luney Bend,” it reads, a play on Luna’s name (passed down from her grandmother), the bend in the creek out back, and the obvious reference to a cartoonish “loony bin.”
“Nothing is normal here,” Hollett says with a laugh.

You’d be hard-pressed to find a single item in the four-bedroom, four-bath log cabin that doesn’t reflect Hollett’s heritage, and the fact that Caswell County was North Carolina’s richest tobacco-growing region in the early 1900s. Sure, other folks have built cabins from old tobacco barns (Hollett used five from her family’s Century Farm). They might even have stones from a pre-Civil War house (yep, for the foundation). 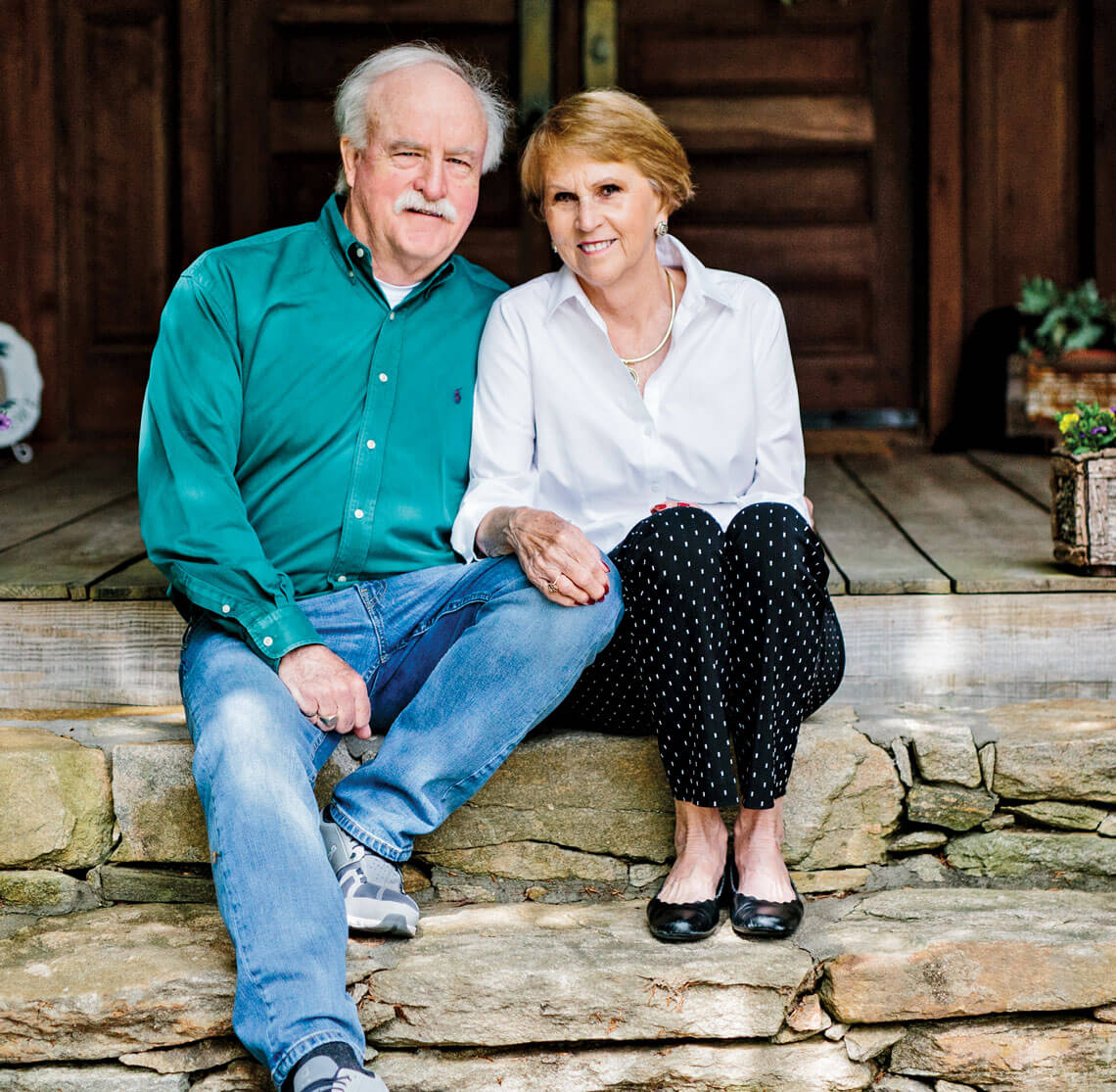 But how many used tobacco sticks for shoe- and chair-rail molding throughout? Oh, and as a bathroom vent fan cover. The foyer railing is made of a “stringer stick” of dried tobacco leaves, complete with spools of string attached. The copper chandelier is — that’s right — a tobacco plant, fashioned by Yadkinville artist Michael Felk; Hollett uprooted the real thing for him to copy.

“My family has been involved in tobacco farming since Jamestown,” Hollett says. “I wanted to pay homage to my family, and I’d always wanted to build a tobacco cabin.”

Hollett found a willing kindred spirit in local cabin builder Kevin Thomas, who undertook the job in 2008. A year later, Hollett; her husband, David; and their two grown sons were sitting, swinging, and enjoying the view on the three porches that wrap around the cabin. One is filled with rockers decorated with team colors and logos from every school that family members have attended. Another porch’s wall bears a battered thermometer that once hung on a nail in a tobacco barn: “Yellowing, Fixing, Drying, Scorching,” it says beside ascending temperatures.

And inside: You might guess that a tobacco basket would be displayed on a loft wall. That there would be photographs of Hollett’s family standing in tobacco fields, a framed bill of sale for tobacco (200 pounds for $13), vintage advertisements, stacked cigar boxes, and even a tiny tin that once held tobacco seeds — each “about the size of a pepper speck,” Hollett says.

But a shower curtain sewn of burlap and tobacco sheeting? Yep. Bedroom mirrors were once packhouse windows. A quilt stand was fashioned from tobacco sticks. There’s a collection of pegs that farmers used when they planted seeds by hand. Wall sconces that were once loom spindles. On and on. Will this lunacy never end? Not if Luna Hollett has anything to do with it. 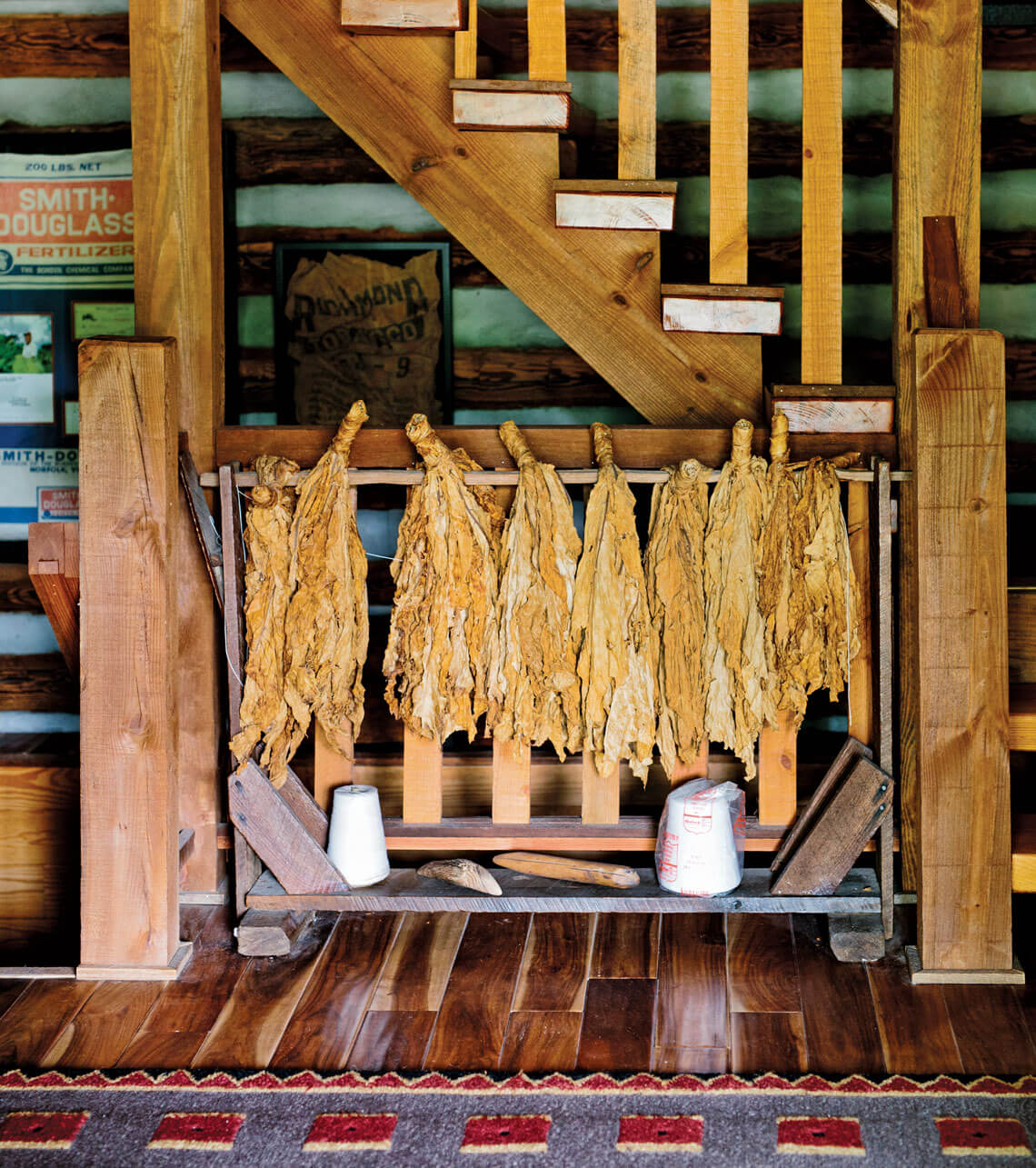 Dried tobacco leaves on display at the Holletts’ cabin. photograph by Anagram Photo