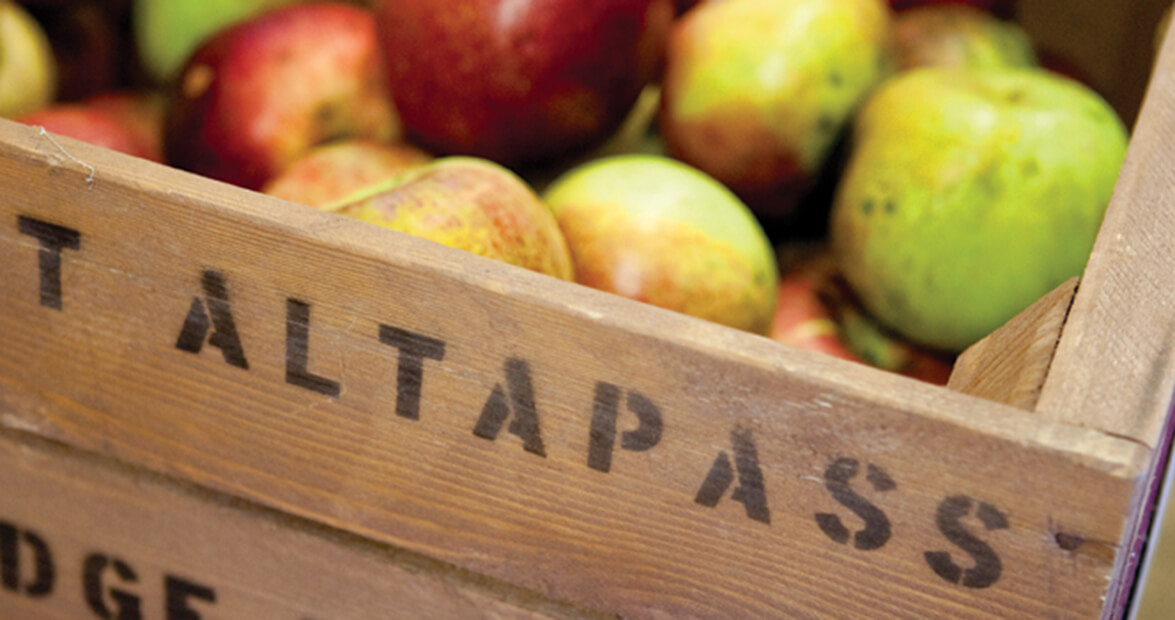 EDITOR’S NOTE: This story was originally published in the January 2010.

The dirt road that leads to The Historic Orchard at Altapass is lined by tangled clusters of apple trees, bowed and gnarled into contorted shapes bearing yellow, red, and green bounty. The path passes beehives, Queen Anne’s lace, and clumps of clover on its dusty way to the orchard’s large, red store.

The orchard, on the Blue Ridge Parkway near Spruce Pine, carries more than the fruit of its 3,000 apple trees, some nearly a century old. Here, mountain heritage is preserved through music, dance, storytelling, and crafts. While monarch butterflies are nurtured at the orchard only to migrate south each fall, the aged trees give an air of timelessness to the traditions honored here.

About 60,000 visitors a year come to the orchard from May through October to savor the apple harvest, watch the monarch pilgrimage, and listen to live bluegrass, country, and mountain music. Bill Carson greets everyone as if he’s met them all before — and many he has. In 1995, Carson’s sister, Kit Trubey, bought the orchard, now a nonprofit, to save a slice of history from development. Then the three of them — Trubey, Carson, and his wife, Judy — became business partners for the orchard. Bill is the executive director.

“It’s important to save not only the orchard and its beauty but also the history of the place and the people and things that are important in their culture,” Carson says. “This is a peaceful place where people can find a little haven and discover things about themselves and the area.”

Visitors discover a lot about the area from the orchard’s programs, and, in September and October, they can help tag and release butterflies.

The orchard, on 144 acres in McDowell County, is ringed by Apple Mountain, Jackson Knob, and other peaks. At the bottom of a hill behind the store, beyond the groves and a stand of locust and tulip poplars, 30 trains a day chug by. The Clinchfield Railroad started the orchard in 1908 and shipped apples by rail around the country. The railroad named the community Altapass because it was the highest point on its track between Elkhorn City, Kentucky, and Spartanburg, South Carolina. Altapass once was an active crossroads with a hotel and golf course.

The Altapass orchard, one of just a few in the area, grows about 40 varieties, most harvested in September and October. An exceptionally good harvest produces about 10,000 bushels. The store operates in a former packinghouse that dates to the ’50s. In the orchard’s prime, workers packed 125,000 bushels a season. In addition to fresh apples, the store sells local honey and other products from its fruit: dried apples, cider, apple bread, apple fudge, and tart-like fried pies.

Years ago, Altapass orchard managers planted the York Imperial to supply a Gerber baby food plant in Lincolnton. Gerber may have preferred the York Imperial, but music legend Doc Watson has a different favorite — the Virginia Beauty. “That’s what he grew up with,” Carson says. In the past, Watson visited the orchard annually to get apples.

The Virginia Beauty and York Imperial are among the orchard’s heirloom apples — varieties that date back a century or so. The Altapass site is believed to have North Carolina’s largest collection of Virginia Beauties.

Calvin Hall knows the heirlooms. His father worked at the orchard for more than 50 years. He mowed with a scythe, sprayed and picked fruit, and hauled apples to the packinghouse with mules and horses. Hall, of Spruce Pine, visits the orchard every week to dance and listen to the music he grew up with. “I’m tickled to death. It brings back a lot of good memories. I was real pleased when they opened it back up,” he says.

In preserving both musical and agricultural heirlooms of the Blue Ridge, the orchard is rare. “That’s a real nice intersection there. It brings the uniqueness of place home to the visitor in two ways. They’ve really gone a long way in making accessible a lot of very wonderful traditions of that region,” says Wayne Martin, folk life director with the North Carolina Arts Council. “They’re dedicated to presenting musicians whose families have been in the area for a long time.”

Enter Terry McKinney, 61, a local musician who plays at the orchard regularly and is on the board of directors. “I consider the orchard a mountain music revival, sort of like the folk revival. It has created a new interest in the older tradition of the mountains,” says McKinney, whose great-great-grandfather, Charlie McKinney, settled the land that’s now the orchard in 1796. “The music is as pure as it was years ago and as pure as the running water of Linville Falls.”

A woman at a concert brought a photograph of her late father, whose last wish was to return to the orchard once more.

Not unlike people from the area, monarch butterflies by the thousands find their way back to the orchard on the annual trek to Mexico for the winter. Clouds of monarchs pass through the orchard during migration. A favorite stop is the butterfly garden beside the store, with its tempting collection of milkweed, red clover, asters, and other plants.

Judy Carson raises caterpillars from eggs she collects on milkweed leaves and tags them as adults as part of a university research project. “It’s a positive species, and it also is a wonderful teaching tool, seeing these insects going through all these stages,” she says.

A.O. McCarley has marveled at the monarch’s transformation from caterpillar to butterfly. He and his late wife visited the orchard each September for the migration and apples. McCarley, of Wilmington, returns to the orchard each year for the memories.

“This regeneration of the monarch is inspiring,” Bill Carson says. “It’s something that every age can identify with, and sometimes city folks need it. They don’t ever awaken to nature except through examples like this.”

The Carsons awakened to nature after they acquired the orchard. “We bought it not knowing a thing about apples,” says Carson, 71, a retired rocket scientist with IBM. He and his wife moved to Little Switzerland from Maryland in 1993. He taught himself by reading guides on apple growing, attending conferences, and using resources from North Carolina State University.

The orchard taught the couple about concepts of time.

“The use of time is different here. Everybody not from here divides their time up into 15-minute and half-hour schedules,” Carson says. “But when they come here, they can lose track of time and enjoy being instead of doing.”

At the orchard, as with music, apples, and butterflies, mountain time is time preserved.