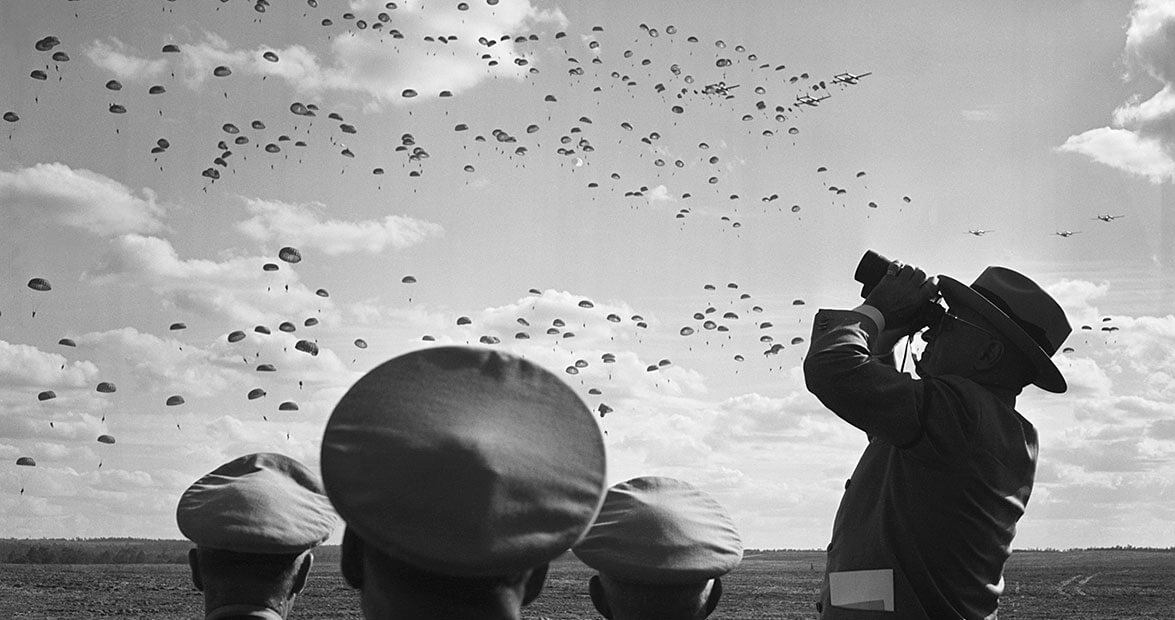 When war comes, a formerly remote airfield on 300 square miles of longleaf pine, wire grass, and wetlands northwest of Fayetteville takes on new importance for the U.S. Army. The post is established in 1918 to train six artillery brigades — 16,000 soldiers and almost 6,000 horses and mules to haul the guns. The Army purchases the land from local families for about $6 million. The sandy soil makes it poor farmland, but the piney Sandhills region is a perfect place to fire off artillery — far enough from Fayetteville to the south and Southern Pines to the west, served by a reliable road and rail network, usable in all seasons. Based at nearby Pope Field — named for Lt. Harley Pope, who perishes when his plane ditches in the Cape Fear River while surveying the area for airmail routes — a squadron of Curtiss JN-4D Jenny biplanes patrols for wildfires and spots the fall of shells. The place remains so wild that pilots are instructed to buzz the grass field before landing to chase off grazing deer.

But by the time the camp is operational, the Great War is over, and the War Department, its funding cut, plans to close the base. However, its commanding general, Albert J. Bowley, is determined to keep it open. General Bowley is a hard-driving West Point officer, a veteran of the Spanish-American War in the Philippines and the last crucial offensives of the Great War. 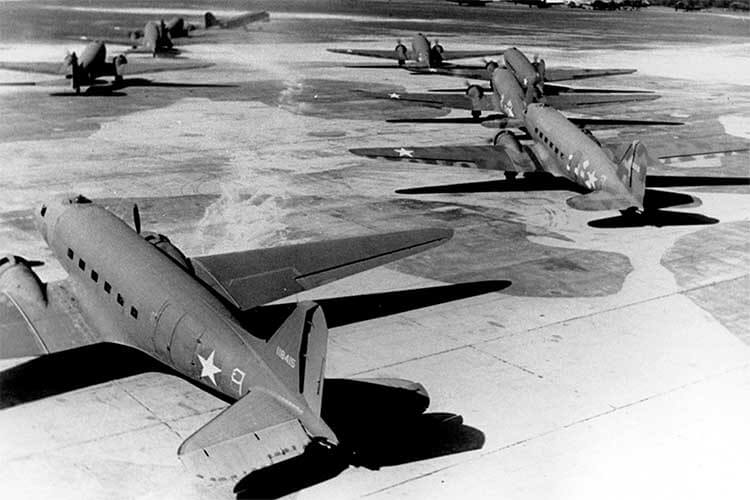 He has the support of boosters in Fayetteville, for whom the base has become a significant part of the city’s civic identity. On September 30, 1922, it officially becomes Fort Bragg — a permanent post.

Now, as the nation reels from the attack on Pearl Harbor, the number of troops at Fort Bragg increases from 5,400 to 67,000 in a single year. By war’s end, the Fort Bragg complex will house more than 100,000 soldiers, including troops at nearby Camp Mackall.

And many of those soldiers will prove themselves to be the most elite troops in the world.

In 1895, 30-odd miles north of the Sandhills in Dunn, a small turpentine-distilling and logging town, William Carey Lee is born. The son of a Civil War veteran, he grows up working in the tobacco and cotton fields, lends a hand at the family hardware store, becomes an avid hunter and outdoorsman, and matures into an independent thinker and a physically active young man. At Wake Forest College and later North Carolina College of Agriculture and Mechanic Arts, he signs on for ROTC and plays baseball and football.

When the Great War comes, Lee enlists, leads a platoon and later a company in combat, and is part of the Army of Occupation in Germany. After deciding to make the Army his career, he studies tank warfare at Fort Meade and is posted to France for further training in armored warfare. Lee travels extensively in Europe, and in Germany sees for the first time a parachute regiment in action — and dropping from airplanes, a tactic known as “vertical envelopment.” If an army can place troops behind the enemy in one fell swoop, hemming them in behind a frontal and flanking assault, the enemy can be routed.

Lee carries the idea home to his new post in Washington, D.C., where he becomes a champion of developing airborne troops. Chief of Staff of the Army Gen. George C. Marshall is also intrigued by the idea of airborne troops, as is President Franklin Roosevelt. Lee, then a lieutenant colonel, is summoned to brief the president, and in March 1940 is put in command of the Provisional Parachute Group at Fort Benning, Georgia. He recruits volunteers from the 29th Infantry to form a parachute test platoon of unmarried men in prime physical condition with at least two years of experience in the Army. “We wanted them cocky, self-confident, aggressive, and proud,” he says, “but above all, we insisted on good discipline.” 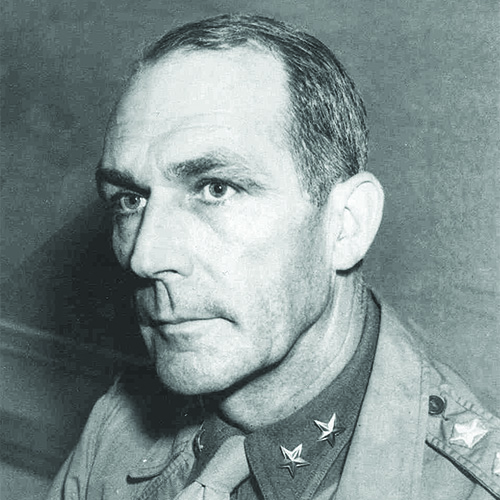 His first makeshift uniform for the new unit consists of mechanic’s overalls, high-top leather tanker’s boots, and a Riddell football helmet. The uniform evolves with experience to feature a special jacket, an equipment harness, baggy trousers with cargo pockets, and a steel helmet with a chin cup and strap. The high lace-up boots, baggy pants tucked into the tops, become a distinguishing emblem of pride for airborne troops. So, too, does the medal members of the unit wear: Five successful jumps earn each man the coveted silver wings of the Airborne.

On a jump in November 1941, Lee breaks his back, and when the stunning news of the Pearl Harbor attack comes over the radio, he is still recuperating in an upper-body cast. But the success of the original test platoon has led to the creation of two full airborne divisions of 10,000 men each, supported by engineers and artillery: the 101st and the 82nd — plus glider-borne units — all under the command of Lee, now a brigadier general. In April 1942, the units from Fort Benning and Fort Claiborne in Louisiana are consolidated under the Airborne Command at Fort Bragg. Among Lee’s handpicked officers are Matthew Ridgway, James Gavin, and Maxwell Taylor. Ridgway and Gavin both go on to command the 82nd Airborne, and Taylor the division’s artillery. Lee commands the 101st.

The patron saint of the airborne troops: Michael the Archangel, the winged warrior who stands with his heel atop Satan, poised to impale him with the tip of his spear.

Fort Bragg grows at an astonishing rate. Dirt roads are paved, as are the landing fields at Pope. Railroad tracks running into the base carry trainloads of lumber, galvanized metal sheeting, and concrete. Cranes and forklifts off-load cargo alongside the tracks, and crews scramble to retrieve it. The building crews work in a continuous, synchronized fashion to get the work done — fast.

Nearly 3,000 new wooden buildings spring up — barracks and mess halls, headquarters offices and classrooms — post-and-beam construction of the most basic kind, spartan and utilitarian, with galvanized metal roofs and walls.

After pouring concrete slabs, a crew can erect an entire building in as little as 30 minutes. In this manner, four complexes of barracks are built — lined in straight avenues each nearly a mile wide and a quarter-mile broad.

But even with the frenzy of construction, Fort Bragg is not large enough to handle the flood of airborne and other troops assigned to train and stage for overseas deployment. So in 1942, a short distance southwest of Fort Bragg, the Army builds a complementary facility with 1,750 buildings to train airborne troops, named Camp Mackall in honor of paratrooper John T. Mackall, who was killed in the assault on Algiers. Like Fort Bragg, it features a companion airfield to launch C-47s, the aircraft that will carry troops to their combat drop zones.

Fort Bragg becomes home to all five U.S. Army Airborne divisions: the 101st, the 82nd, the 11th, the 13th, and the 17th. The first black parachute regiment — the 555th, or “Triple Nickel” — undergoes training in parachutes and gliders. Conventional units, including the 9th and 100th infantry divisions, crowd the training areas and parade grounds. The artillery ranges resound with live fire as tens of thousands of gunners learn their trade. The 2nd Armored Division moves in. 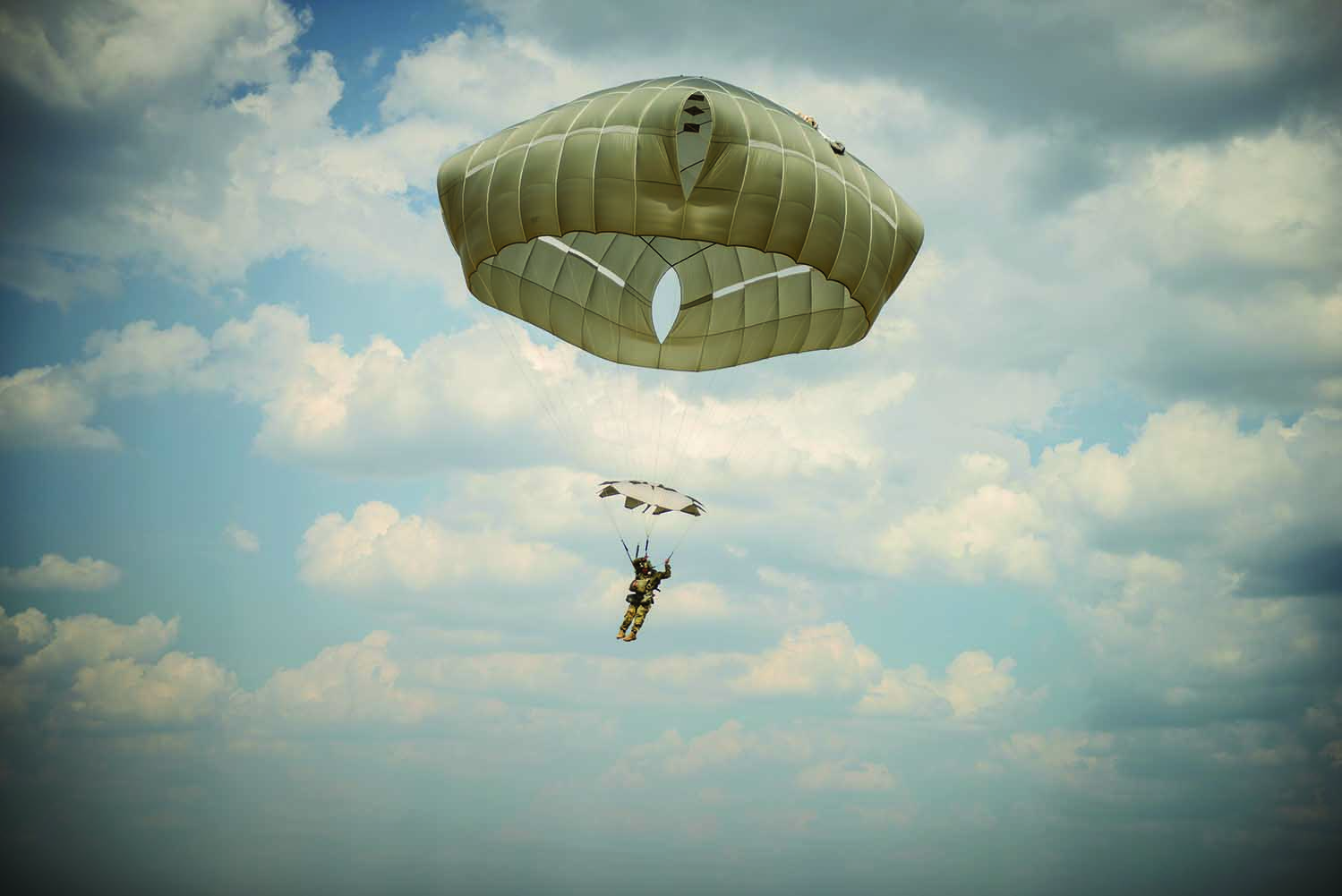 A paratrooper floats to the ground at Fort Bragg during a jump in honor of St. Michael, the patron saint of paratroopers. photograph by Andrew Craft

In September 1943, General Lee is ordered to England along with his airborne division to prepare for the invasion of occupied Europe. Approaching 50 years of age, he trains for 10 months alongside his troops in the 101st, even on their 25-mile hikes. “This is better than plowing a mule on my farm in Dunn,” he quips.

But the long, grueling seven-day weeks take their toll. In February 1944, Lee suffers a major heart attack and must return to the States, to Walter Reed Hospital, to recover. He misses the invasion jump.

Still, the airborne troops he once dreamed of are a reality. The pathfinders of the 101st “Screaming Eagles” are among the first to land in occupied France in the early hours of D-Day — June 6, 1944 — followed by waves of paratroopers clearing the way for the seaborne assaults on Omaha and Utah beaches. Meanwhile, the 82nd — already veterans of night jumps into Sicily in 1943 — drops 12,000 parachute and glider troops to capture vital causeways across the wetlands behind the beaches. From his home in Dunn, Lee listens to the welcome news on the radio.

The cover of Newsweek magazine for June 19, 1944, features a photograph of a paratrooper in midair, having just cleared the jump door. The caption reads: “Air Invader: He Is the 1944 Invasion Spearhead.”

After the war, Fort Bragg becomes the permanent home of the 82nd Airborne.