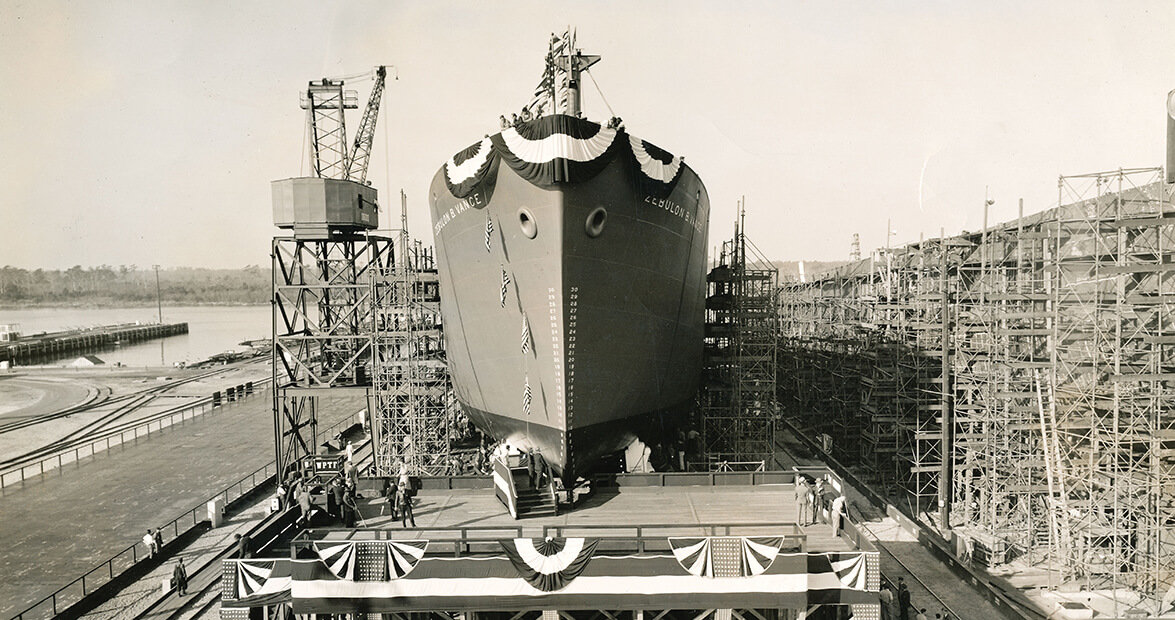 As the decade turns from the calamitous 1930s – with its stock market crash and bank failures, its Dust Bowl and Depression, its unemployment and hunger — to the restless 1940s, war appears more and more inevitable. The Whiteville News Reporter offers its readers “New Year’s Greetings — Peace on Earth 1940,” but days later announces, “National Defense Expansion Urged By The President.”

In November 1941, the Wilmington Morning Star reports: “U.S. Warship Torpedoed While On Convoy Patrol in North Atlantic.” Seventy-seven men of the Reuben James, including seven officers, remain missing and are feared dead. The story resonates with locals: The skipper, Lt. Cmdr. H.L. Edwards, had married a Wilmington girl just six years prior. Later that same month, the tanker Salinas is torpedoed by a U-boat.

America is a continental island. To go to war means crossing an ocean — Atlantic or Pacific — and that requires ships. From Colonial times through the Civil War and during the Great War, the Cape Fear River has been the site of shipyards. But no new ship has been built here since 1918. Now the North Carolina Shipbuilding Company — a subsidiary of the Newport News Shipbuilding and Dry Dock Company — sets up on the east bank of the Cape Fear. Wilmington has won its first wartime battle — against rival Morehead City, which has been actively lobbying to be the shipyard site.

Newport News Shipbuilding is renowned for the craftsmanship and teamwork of its shipwrights, and the company has never endured a strike in half a century of operation. But the company is also anti-union, and almost from the start of operations, the Wilmington site is locked in an ongoing dispute with the Congress of Industrial Organizations (CIO). 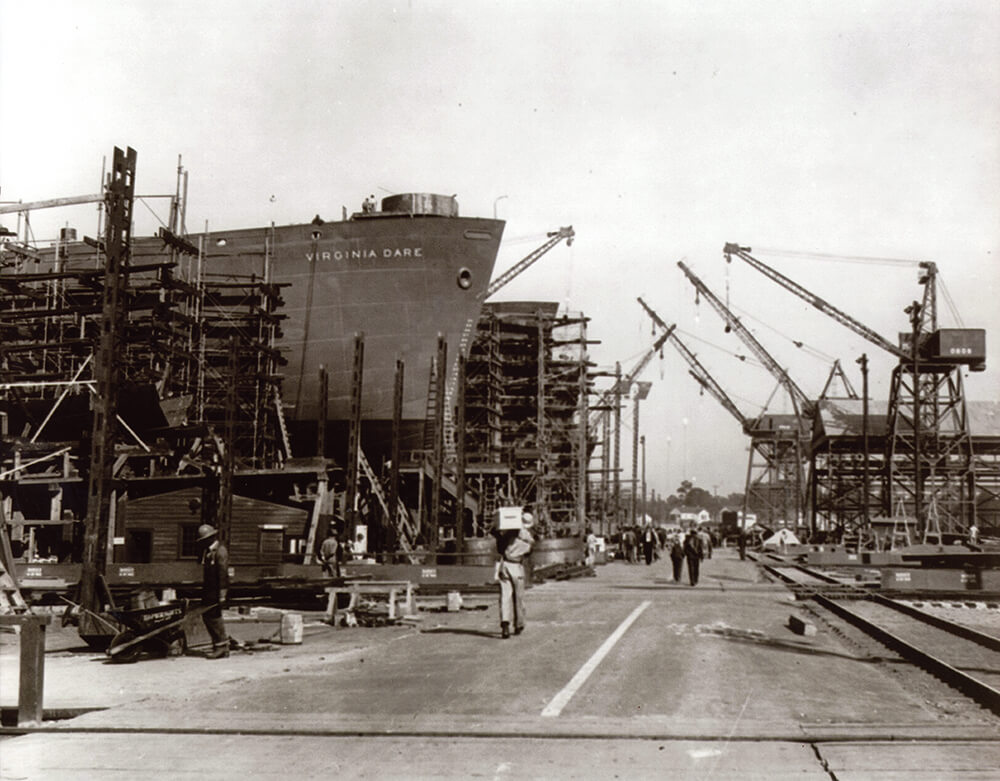 Building Liberty Ships was dangerous and deadly. Some 115,000 workers were injured and 15 died during the five years the North Carolina Shipbuilding Company was in operation. photograph by New Hanover County Public Library

The president of Newport News Shipbuilding is Homer Lenoir Ferguson — a Waynesboro native, the son of a Confederate veteran. His strict Scotch-Irish upbringing instilled in him a fierce work ethic and an abiding respect for those who work with their hands — including blacks. He routinely hires black workers for skilled positions such as machinist, riveter, engineer, and welder.

He was elevated to lead the company after his predecessor, A.L. Hopkins, went down on the torpedoed Lusitania in the Great War. Ferguson is 68 years old, a U.S. Naval Academy graduate who studied naval architecture in Glasgow, Scotland — the nation that produced revolutionarily fast blockade runners for the Confederates during the Civil War.

The plan for the Cape Fear shipyard is straightforward and efficient: construct 37 new cargo ships, at a cost of $42 million, to a uniform design adopted from the British and used by all American shipyards — which can be modified for tankers and fitted with anti-aircraft guns — and carry supplies to England through the Lend-Lease Act of 1941. Rather than using the traditional expensive and time-consuming method of riveting steel plates, workers will build the ships in modules and weld the pieces together — a technique that has not been tried much in ocean-going ships. No one really expects the ships to hold up for more than a few years, but speed and efficiency are worth the risk.

The two white communities are located near Greenfield Lake, just north of the shipyard and an easy commute away. Housing for black workers is located at Dawson and 14th and 15th streets — several miles away. Buses serve all three communities — some of the fleet of 140 trucks and buses ferrying workers back and forth between Wilmington and the beach towns, and also places as far away as Whiteville, Fairmont, Lumberton, and St. Pauls.

When the whistle blows, signaling the end of a shift, workers sprint from the gates for more than a block to secure a seat on the homebound bus — or else be forced to stand as straphangers.

Work gangs are integrated — with white and black men working alongside one another in a range of skilled and unskilled jobs — but dining, restroom, and locker facilities are strictly segregated. White workers read the Shipyard Bulletin; their black counterparts enjoy The Colored Shipbuilder.

Discrimination by Maritime Commission contractors is prohibited by executive order, but practice does not always follow the law. During periods of racial tension, blacks and whites exit the yard through separate gates.

In a matter of months, the shipyard takes shape on almost 57 riverside acres — including its own bus terminal, cafeteria, police and fire departments, and even a hospital. Four hundred Newport News employees are transferred down from Virginia, but more than 500 men and women are recruited locally: plumbers, carpenters, and electricians, along with unskilled trainees who will have to learn on the job.

At first, women are relegated to less strenuous jobs. But they quickly prove their abilities and take on more physically demanding jobs such as plumbing and welding. They dress in slacks and blouses and find work shoes where they can — a difficult task, since steel-toe boots are manufactured only in men’s sizes. Many wear Boy Scout shoes or regular open-toe footwear — and broken toes are a constant hazard. The yard is swarming with workers 24 hours a day in three shifts, but women are allowed to work only the first two — never the graveyard shift, and never below decks of a vessel, to avoid compromising situations. The company provides on-site day care for their young children — though young women without children are most valued as workers. 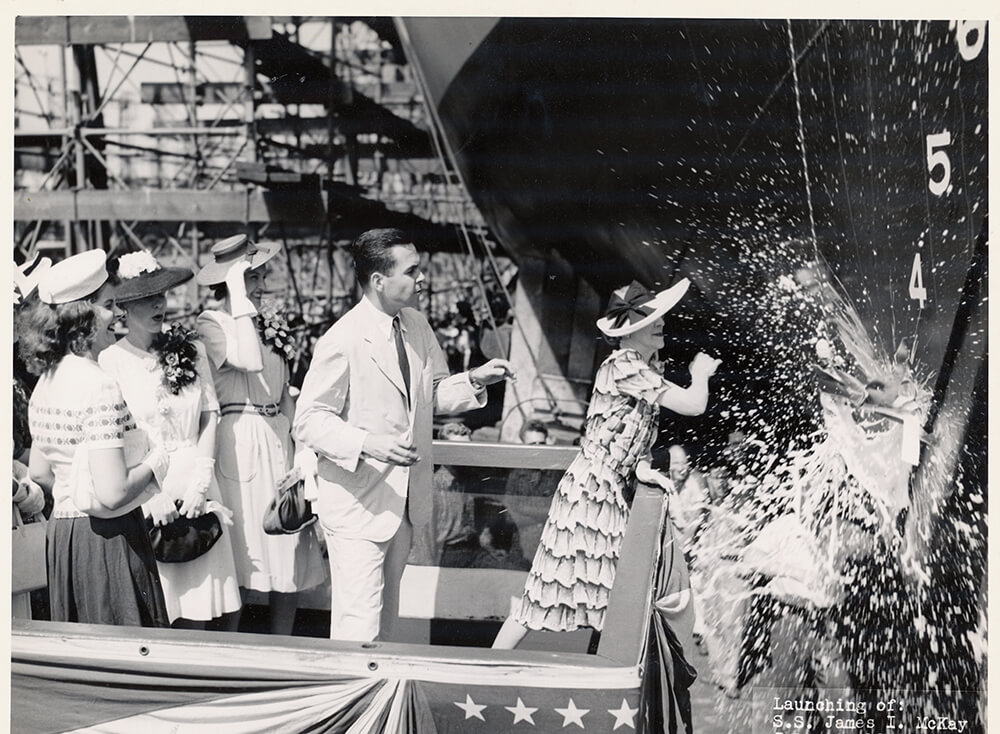 On July 30, 1943, the SS James I. McKay was christened in Wilmington by Mary West Cromartie, a descendant of the ship’s namesake, a North Carolina congressman from the 1800s. photograph by New Hanover County Public Library

At night, the yard is illuminated by nearly 2,000 floodlights, with an unintended, dangerous consequence: Captains of vessels passing off Cape Fear complain that on cloudy nights with no moon, they are silhouetted against the bright loom of the yard, making them perfect targets for U-boats. On the night of March 12, 1942, the tanker John D. Gill, bound for Philadelphia, is torpedoed and sunk near the mouth of the river. Future sea trials for newly commissioned vessels are conducted entirely inside the river.

The yard keeps growing, eventually housing a shop for a new high-speed turbine gear so secret that the shop is left off maps of the site. Within two years, the shipyard employs 25,000 people and dispenses a payroll of $50 million a year — transforming Wilmington into a lively boomtown, as young workers with money to spend mingle with soldiers, sailors, and Marines at the growing collection of USOs, bars, and nightclubs. The USO on Second and Orange, open 24 hours a day, seven days a week, becomes one such social hub. Junior Hostesses and Liberty Belles dance with servicemen, mend their uniforms, and serve them refreshments.

Before it launches a single vessel, the shipyard is clouded by controversy. The first of the designated “Liberty Ships,” scheduled to come off the ways in December, will be named Francis Marion — honoring the Revolutionary War guerilla leader from South Carolina. Others are to be named for Nathanael Greene and Daniel Morgan — Revolutionary War generals from Rhode Island and New Jersey, respectively — and four more South Carolinians: John C. Calhoun, Charles C. Pinckney, William Moultrie, and Edward Rutledge.

The naming choices strike a blow to local pride. The Star reports without a byline that the Wilmington Chamber of Commerce is protesting to Adm. Emory S. Land, Chair of the United States Maritime Commission: “Thus, it would appear that, to date, South Carolina has gained more recognition than any other state in the number of vessels constructed here.”

Just weeks before the launch, the Commission accedes to the protest: The new vessel instead will be christened Zebulon B. Vance — after the lionized Civil War governor of North Carolina. The ship will stretch 441 feet and 6 inches in length with a beam of 56 feet, displacing 14,100 tons and drafting 27 feet and 8 inches. The Vance will be manned by 44 officers and crew, and will carry more than 9,000 tons of cargo: 440 tanks, 2,840 Jeeps, or 230 million rounds of small arms ammunition. The price tag is steep: $1,610,000.

“It will become a cog in the great wheel of defense,” the Star reports. “The Vance and hundreds of its sister ships being built at yards on every coast of this nation will make up the greatest commercial armada in history.”

The Greater Wilmington Chamber of Commerce sponsors a laudatory congratulations under the headline “There She Goes”: “Bon Voyage to you, oh good ship ZEBULON B. VANCE! Wilmington-made you have aboard a full cargo of Wilmington Pride. May good fortune always attend you as you carry the Stars and Stripes of a Free Country through the troubled waters of the world.”

The Vance will be loaded immediately after being fitted out — and will carry the Wilmington port’s first Lend-Lease cargo.

The launch takes place at noon on December 6. Newport News Company’s Ferguson presides, opening the short ceremony with brief remarks, followed by Capt. Edmund Macauley of the U.S. Maritime Commission. Gov. Joseph Melville Broughton also addresses the crowd — the winner of the largest vote in history honoring the legacy of another wartime governor who won by a landslide. His wife, Alice Wilson Broughton, christens the ship with the traditional bottle of champagne.

The Vance is the first of 243 ships to be built at Wilmington — of both Liberty and the faster Victory design — 27 of which will be sunk by the enemy.

But the Vance is lucky. On the dreaded Murmansk run, it survives a torpedo attack and floating mines, then serves in the transport fleet for the invasion of North Africa. Later, it does duty as a hospital ship, renamed USS John J. Meany. Its final duty in the war is to transport war brides home from Europe.

But all of that lies in the turbulent future.

As spectators mob the riverbanks, the Vance — its rigging festooned stem to stern with nautical flags — slides stern-first down the ways and plunges into the river, sending a tannin-brown wave surging toward the far bank. A squadron of tugboats blast their whistles and quickly nudge the great vessel alongside the fitting-out dock.

The dignitaries retire to a celebratory luncheon at the Cape Fear Country Club. Workers like Elverton Shands, who was trained as a tank tester at Newport News before returning to the shipyard for the launching of the Vance, head for home.

Scarcely 24 hours later, Shands is upstairs listening to the radio. “It was the Washington Redskins and the Bears game,” he recalls. A newscaster interrupts the game to report that Japanese forces have attacked Pearl Harbor. “Well, I knew my father was in the Navy. … And I came downstairs and I said, ‘Daddy, where’s Pearl Harbor?’ ” His father tells him.

Now, the Liberty Armada will be sailing into a world war.

The ships launched on the Cape Fear are considered among the best and most efficiently built vessels of their time, but on April 16, 1946, the last ship slides down the ways — the SS Santa Isabel. The North Carolina Shipbuilding Company shutters its operation — and releases most of its 25,000 workers.

After almost five years of active politicking and negotiation by the state’s congressional delegation and other proponents, on November 15, 1949, the state ports authority is granted a 50-year lease on the northeast section of the yard — the beginning of a true modern port.

Part of the site will be developed into the Port of Wilmington, a modern state deepwater port — planned but never realized after World War I.

The Liberty Ships at last retire from the high seas, but the port they made possible remains.