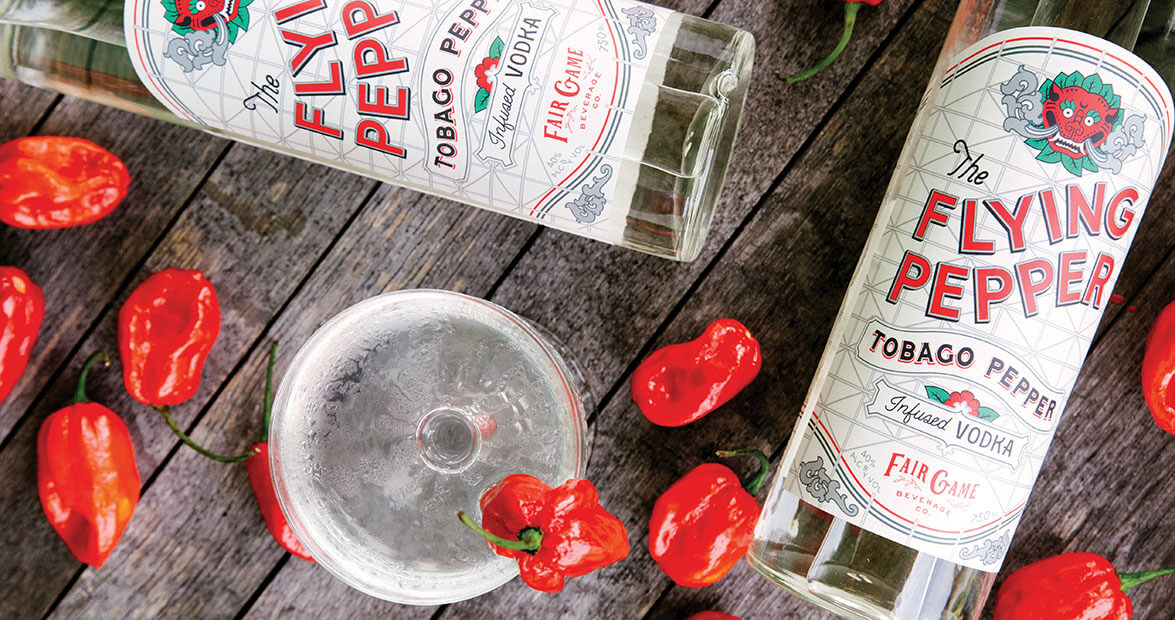 Adorable little candy-colored peppers grown in North Carolina are often face-meltingly hot, with menacing names to match: Dragon’s Breath, the Viper, the Reaper. So it may take some courage to bite into a certain diminutive, poppy-red beauty from the Piedmont. But instead of a fast burn, you’ll get a mouthful of sweet, citrusy notes and a mellow smokiness that can perfume your whole kitchen. Steep just one in a bottle of vodka, and you’ve found the true soul mate for a tall glass of tomato juice.

Bushels and bushels of these fine little peppers, called ají dulce, are grown at select farms across the state for a small distillery in Pittsboro, Fair Game Beverage Company, which makes all sorts of barrel-aged spirits and, since 2015, one notable vodka: The Flying Pepper. Rose Dyer, the head distiller, remembers well — maybe too well — that first summer of vodka production, when 300 pounds of fragrant peppers came rolling into the distillery. 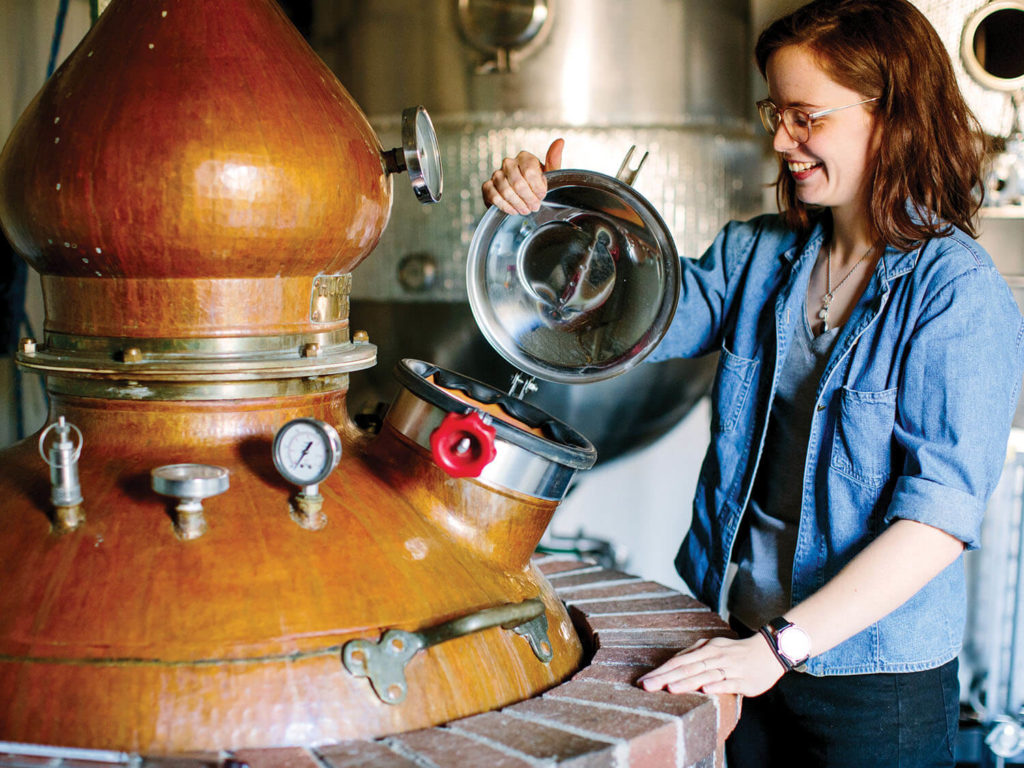 After plucking out each tiny stem, Rose crushed each pepper by hand, and then smelled it, to make sure it matched the right flavor profile. “I realized early on that I was looking for the exact smell of Juicy Fruit gum,” she says. Keepers went into the vodka bath, where they would macerate for about a month. The ones that smelled too sweet or too spicy or “too much like Chef Boyardee,” as Rose puts it, got tossed. The result is a pepper vodka with a smooth smoked paprika-like finish — without the throat-biting heat. A pepper vodka that can complement, not overpower, a pickled okra spear or a dollop of horseradish. That’s why, Rose says with a modest smile, “we were instantly part of the Sunday brunch circuit.”

Only 26 years old, Rose is already a company veteran, having started at Fair Game as an intern in its first year, 2014, while studying chemical engineering at NC State. One year into her tenure, the head distiller at the time, Chris Jude, decided to produce flavored vodka using a type of pepper he’d been introduced to by his friend Doug Jones, an innovative farmer who leased land on the same property as the distillery. Doug specialized in breeding peppers that had originated from seeds collected on the Caribbean island of Tobago. He hoped to develop a Tobago variety with more flavor than heat that would produce well in the Piedmont.

“For years, I had suffered the heat of habanero hot sauce to enjoy the background flavor I love,” Doug says. “I was always thinking, ‘Damn, I would enjoy this stuff so much more if it weren’t screaming hot.’ ” He finally settled on a specific variety, ají dulce: “It was an aha moment when I tasted it. Not even 1 percent of the heat of a habanero, but all the flavor.” 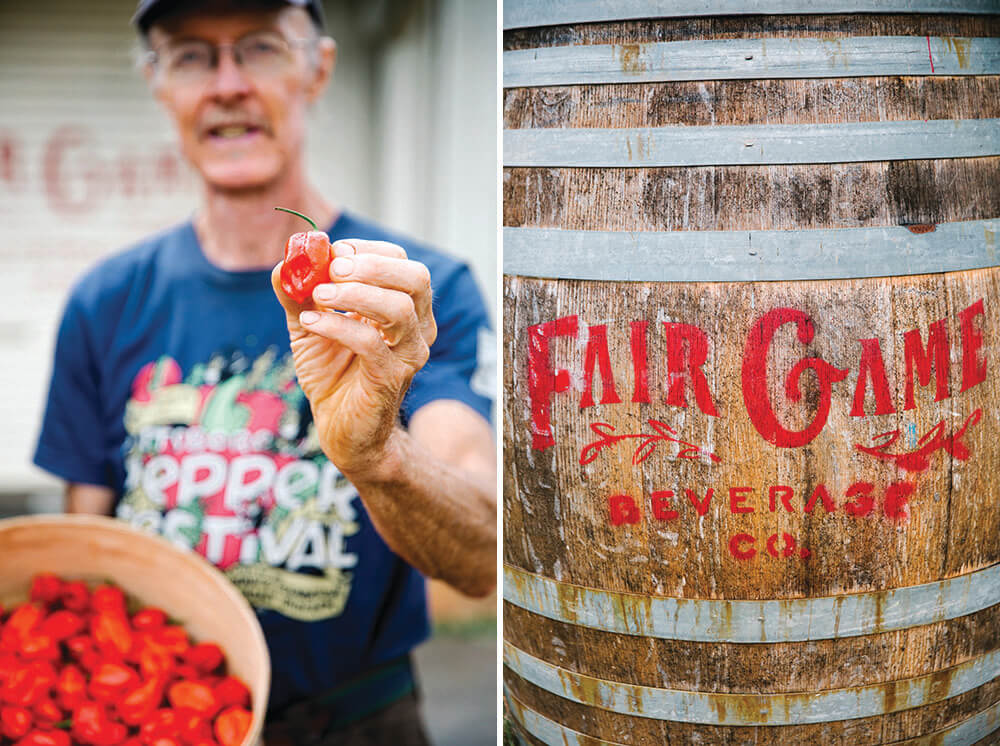 Soon, Chris was growing them at home, too, and soaking them in vodka for a special homemade hooch. When he decided to mass-produce it in 2015, he brought in vodka from TOPO Distillery in Chapel Hill and asked farmers from across the state to grow peppers descended from Doug’s special variety.

Doug has since gone on to pepper fame through PepperFest, which he started with the Abundance Foundation in 2007 as a way to introduce people to distinctive peppers grown in the state. “We give chefs a big batch of peppers to create dishes, and the ticket sales pay the farmers for the peppers. The public gets to try different varieties, chefs get exposure, local farmers get better known — it’s a win-win-win,” Doug says.

Like Doug, Rose relies on scientific methods to maximize flavor. “I’m a big believer that you have to learn the rules before you can break them,” she says. “In distilling, you can know the basic theory — but it’s the same theory you use to get moonshine that’ll make you go blind.” Understanding the relationships between ions and elements, between time and taste, creates a more sophisticated, and decidedly safer, drink.

A long, cryptic physics equation inked down Rose’s forearm is a permanent reminder that science has always shaped her life. “My grandfather made his career on this equation,” she says, rubbing it as though for good luck. An NC State auditorium is named after him, Dr. Dale Sayers, an esteemed professor of physics. Rose, however, picked a different path: “You get to make things in chemistry,” she says. “It just seemed like more fun than physics.”

Case in point: She fills her pipettes with wine to measure sulfite levels, and experiments with carbon filtration systems that can remove pepper pigments without stripping flavor. By applying a stoichiometry equation  — a way of moving elements around to get a balanced formula — to a sulfite stabilization problem, she came up with a clever solution. Sometimes, when she’s climbing up on the oak bourbon barrels to take a sample of Fair Game brandy for testing, she’ll stretch out, breathe in the boozy, caramel-scented air (which smells about 80 proof), and enjoy a moment of contentment. But kicking back isn’t often part of the job. This year, Fair Game hopes to produce 8,400 bottles of The Flying Pepper. “We can’t process any more peppers than that,” Rose says. “We’d have to find more friends to help.”