Close your eyes and imagine life on a boat. You’re probably envisioning a carefree existence: aquamarine water, tanned skin, pineapple cocktails. And you’re right, but that’s only part of the story. To find out what it’s really like to be a “liveaboard,” lessons of life on the water can be found in Beaufort.

First known as Fishtown for the menhaden and other catches brought in on wooden vessels, Beaufort’s boating history still saturates the town today. Recreational divers explore the wreckage of ships that met their demise in Beaufort Inlet over the centuries. Tourists inhale the scent of sawdust as they watch master shipbuilders and students practice their craft at the maritime museum. Commercial fishing boats come and go on busy Taylor’s Creek. 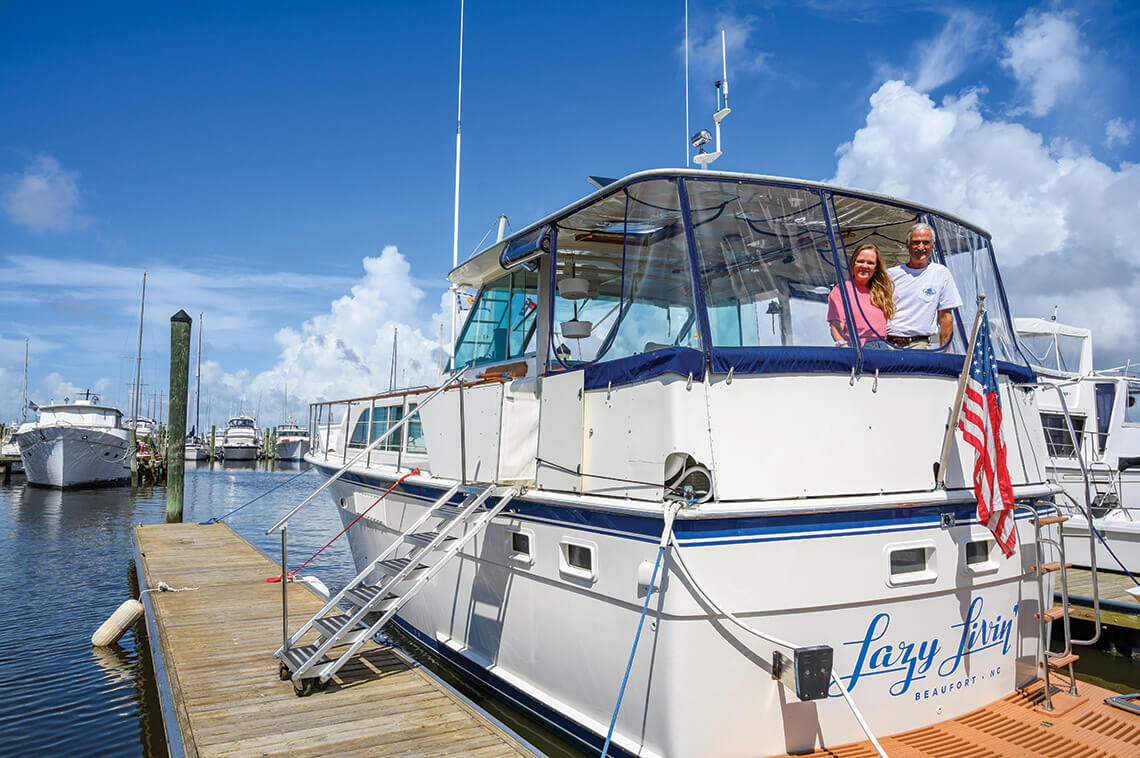 Doris and Monty Groff, owners of the Lazy Livin’, prefer to keep their boat sparkling clean, or in “Bristol fashion.” Every month, Monty puts on his snorkel and scrubs off barnacles below the waterline. photograph by Chris Council

For most of the liveaboards who dock in Beaufort, their boats are only secondarily fishing or recreational vessels. Primarily, they are tiny homes, complete with granite countertops and inflatable bathtubs, docked in one of Beaufort’s dozens of marinas. And though most liveaboards remain tethered to life on land in some way — through work, school, or even a spouse who prefers terra firma — they all find freedom on the water. 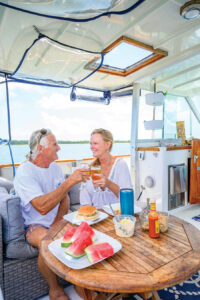 The Groffs love living on their boat. “You can take your house where and when you want,” Monty says, “and your scenery changes with the drop of an anchor.” photograph by Chris Council

Six years ago, Monty and Doris Groff were living on 12 acres in a 3,400-square-foot home. When friends expressed interest in buying their house, they seized the opportunity to fulfill a dream of living on the water. Within 60 days, they’d sold the house, told their kids to come take whatever furniture they wanted, and bought a 50-year-old classic Hatteras yacht. She’s 43 feet on the waterline, 14 feet wide — and provides 350 square feet of living space.

In the galley, Doris points out the convection oven stacked atop a compact refrigerator stacked atop a cabinet. The tiny space is packed floor to ceiling with cupboards, nooks, and counters that slide or fold out. Shelves have bungees to hold objects in place when the water gets rough. Meanwhile, Monty loves to show off the motor compartment: “Being able to sleep right on top of 8V53 Detroit Diesels — it’s every guy’s dream.”

Monty says that he and Doris are unique among their peers in that they both love living on the boat. “I’m just God-given blessed with a woman who loves the boat as much as I do.”

Lesson No. 1: “Liveaboard” is more than a lifestyle — it’s a community.

Just west of the Groffs, Roy Falgout steps onto the bow of his 1969 Hatteras, cold drink in hand, and watches cars pass over the Beaufort high-rise bridge. Over his shoulder, two flags snap in the wind: a North Carolina state flag and a white flag bearing the image of a martini glass. Falgout used to fly the cocktail flag at happy hour so that his neighbors in the marina knew he had drinks to serve. But he got tired of hoisting and lowering it, so now he just leaves it up all the time. “If you want to stop by, I probably have something for you.”

Here’s another surprise about the liveaboard life. You might imagine solitude: a single white boat surrounded by miles of ocean, sun beaming down. While there are moments of that, liveaboards spend most of their time in marinas, port-to-starboard with other boats. 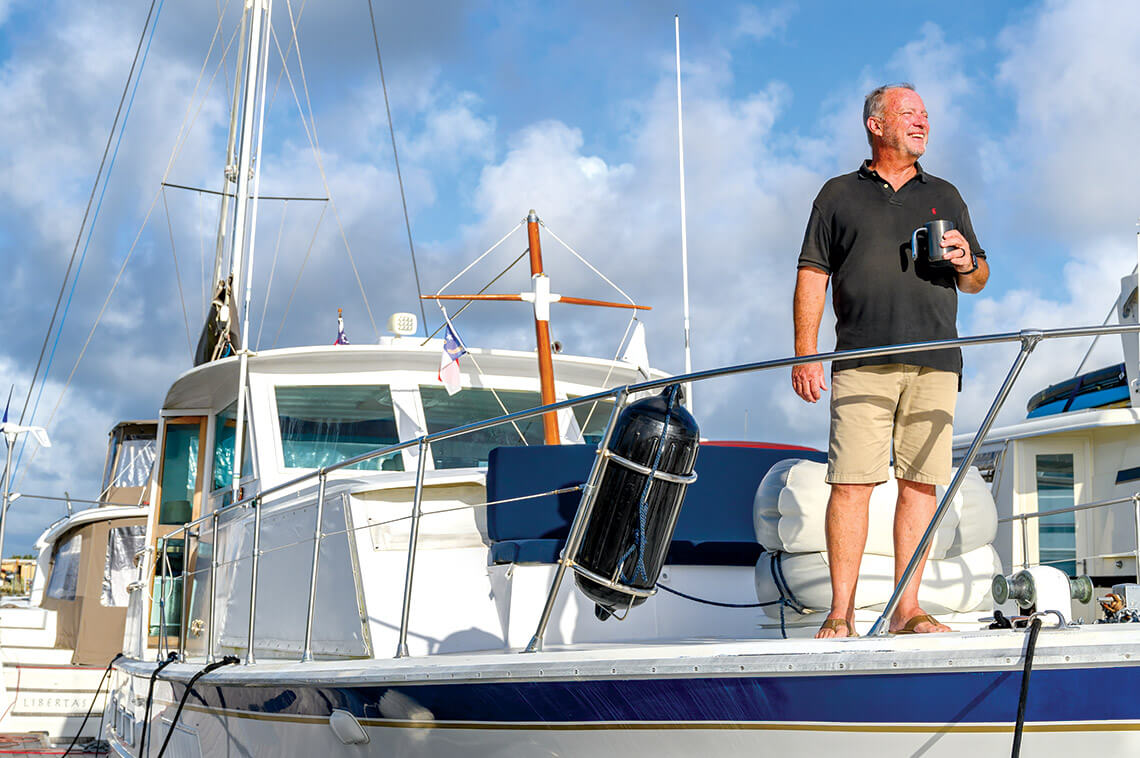 Before transitioning to life aboard the Francis Carol, Falgout whittled down his belongings. “Stuff doesn’t bring happiness,” he says. “I like the idea that I can untie five dock lines and go anywhere water can take me.” photograph by Chris Council

“It’s not solitary at all!” Falgout says happily. “I can step off the back of my boat and talk to someone who is traveling the world. I like that. It’s a community.”

When Falgout bought the Hatteras, his fiancée refused to live aboard. But they still wanted to get married, so they came up with an unusual arrangement: He lives on the boat; she lives in a townhouse a few blocks away. “It works for us,” he says.

Today, Falgout has a reason to celebrate. He just got word that he passed the U.S. Coast Guard’s exam for his captain’s license. He doesn’t actually need the license; it was more a matter of pride. “I have friends who are captains, and I felt like a second-class citizen,” he says. “So I decided to just see what I could do.” 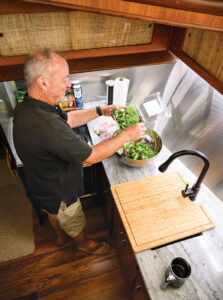 A boat’s galley doesn’t have all the conveniences of a real kitchen, but for liveaboards like Falgout, most necessities can be tucked in the many nooks, cupboards, and cabinets. photograph by Chris Council

The most basic license — known as a “six-pack” because it allows the holder to take up to six paying passengers and crew — is relatively easy to get. The license that Falgout earned is the highest level of a master captain’s license for 100 tons and below. Now, should he ever get the itch to take a 100-ton vessel on the open seas, he’s got the Coast Guard’s stamp of approval. It’s an impressive accomplishment, and even more so because Falgout is legally blind for reading. During the charting portion of the exam, where aspiring captains have to plot a course on a paper map within a very small error margin, Falgout used a magnifying glass. It looks like a paperweight and conjures images of old sea captains hunched over nautical charts.

“I was the last one in there, but I got it done!” Captain Falgout says. He’ll toast with his neighbors at cocktail hour this evening … or maybe this afternoon, if someone sees the flag and wanders by.

Lesson No. 2: Live on a boat is not for everyone — but for those who live it, there’s nothing better.

“I caught something!” Dan Hawryschuk heard his son, then 8, shouting from the bow of their sailboat, where he was fishing with his older brother. “It’s a shark!” A few seconds passed. “It’s a HAMMERHEAD!”

Well, that’s oddly specific, Hawryschuk thought, and he went up to investigate. Sure enough, his middle son was reeling in a baby hammerhead. They snapped a photo and tossed it back.

It was just the kind of life experience that Hawryschuk had in mind when he exited a lucrative corporate career, sold his house, and bought a 52-foot sailboat for his family to live aboard.

“… I didn’t want to be this person who had this dream out there and never got to do it.”

“When I was growing up, there was this idea that you went to college, got a good job, worked hard, and then do your passion after you retire,” Hawryschuk says. But then a coworker passed away at his desk. A friend was diagnosed with terminal cancer. “And I didn’t want to be this person who had this dream out there and never got to do it.”

Hawryschuk, his wife at the time, and their three boys spent eight months cruising off the Gulf coast of Florida, then to the Dry Tortugas, the Keys, and up the East Coast before docking semi-permanently in Beaufort so the boys could attend public school.

Hawryschuk describes the feeling he gets on a boat “like when you were a kid, and you made a fort with blankets over chairs and you had this cool space.” But he understands that it’s not for everyone. “There’s bad weather and mechanical breakdowns. Sometimes, you’re tied up to the dock and there’s no breeze, and it feels more like a tiny apartment you can’t escape. When one person is into it and the other’s not, that’s when you see marriages or partnerships coming apart.”

“On the boat, we’re all in close proximity. There’s more interaction. We have interesting conversations.”

While familiar with the challenges of family life in 650 square feet, Hawryschuk also sees upsides. “When we were in a house, the kids could hunker in their rooms and be by themselves. On the boat, we’re all in close proximity. There’s more interaction. We have interesting conversations. There’s only one TV, so if we watch something, it’s together.”

Hawryschuk’s early “retirement” isn’t exactly a life of leisure. He manages a marina on weekends and owns a shop that repairs sails and boat cushion upholstery. He also spends a lot of time working on the boat with the goal of getting her self-sufficient and reliable for longer voyages. He’s put in lithium batteries, solar panels, and a water maker that converts salt water to fresh at the rate of 10 gallons an hour. He dreams of taking Wayward on longer trips someday. “I’d like to anchor in some cove in Mexico — near some small fishing town you can’t get to by car, where they have a little cantina and you can get a beer and dinner for $3.50.”

In the meantime, he takes the boat out on weekends and shuttles his boys to school and sports practices.

If you envision the liveaboard lifestyle like a permanent vacation, the Groffs look the part: Monty with his white ponytail and board shorts, Doris with her blonde, windswept hair and smile lines a few shades lighter than the rest of her skin. Their boat is even named Lazy Livin’.

Some of their stories confirm the usual expectations. They describe vast starry skies and sea turtle sightings and weekend trips to Cape Lookout that sound as exotic as any tropical vacation. But they have plenty of stories about the practical side of life on a boat, too — like engine repairs, hurricane preparations, and a terrifying trip through the inlet over 10-foot waves. Once a month, Monty has to dive below the waterline to scrub barnacles and seaweed off the bottom of the boat. The Groffs are constantly hosing the exterior to rinse off corrosive salt water. They like to keep Lazy Livin’ waxed and sparkling clean. “Called keeping a boat in Bristol fashion,” Doris says.

For the Groffs, trading their 3,400-square-foot house for the cozy quarters aboard the Lazy Livin’ fulfilled a shared dream of living on the water. Now, Monty says, home is where they drop anchor. photograph by Chris Council

In addition to the extra chores, living on a boat ain’t cheap. An acronym that everyone in the boating world knows, Doris says, is BOAT: Break Out Another Thousand. “Although with inflation, it’s more like Break Out Another Ten Thousand,” she adds. “Anything on a boat is three times what it costs in a house.” Not only are boats expensive to buy and maintain, but slip fees have also soared in the past few years. Renting a slip can cost as much as a small mortgage. There’s a slip that the Groffs are considering buying, but the price tag scares them: $150,000. “Two years ago,” Doris says, “That same slip would’ve been $50,000.”

Despite the hard work and high cost, Doris and Monty love their life. “You drop anchor, and it’s just unbelievable,” Monty says. “You watch porpoises and sea turtles. You see wild ponies running down the beach at Shackleford. We see the sunset and sunrise every day. It’s like being on vacation all the time. Except most of the time when you’re on vacation, you have to get back home, unpack, do chores. That took time to get used to: We don’t have to go home. We are home.”