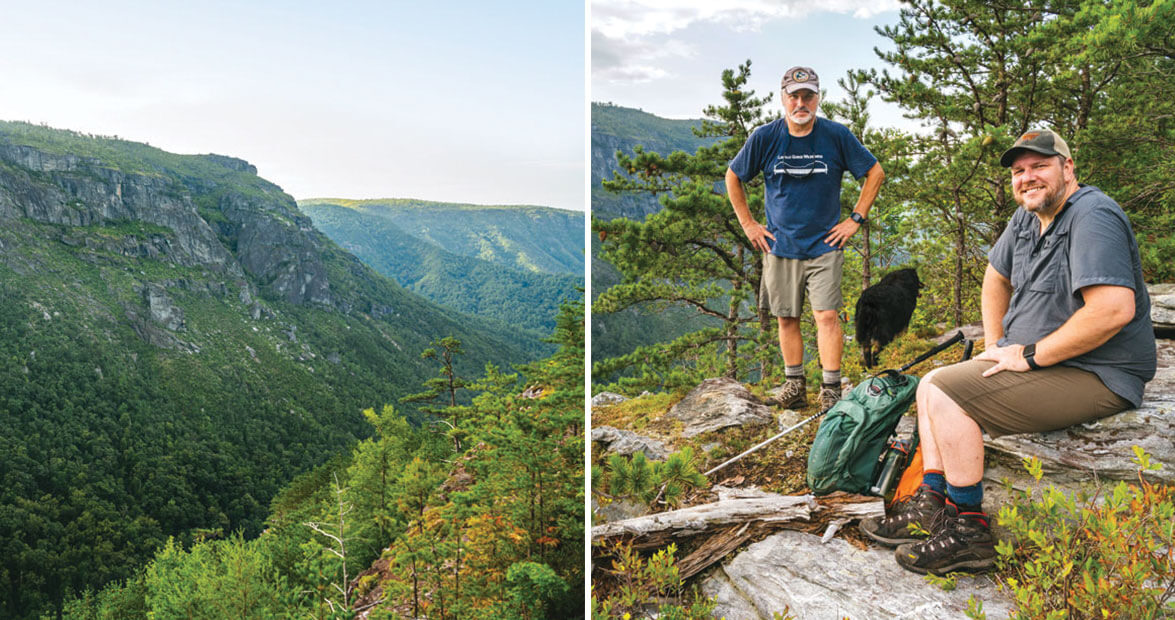 This story first appeared as an episode of our podcast, Away Message. Listen:

Hours before the Black Hawk rescue chopper arrived, Jeremy McWatty and nine other hikers gathered at the Table Rock parking area near the lip of Linville Gorge. First, they headed south, down a well-traveled trail toward a spiky spine of rock known as The Chimneys. Then came the descent: One by one, the men squeezed their way through a tight spot called Mossy Monster Trail, which they believed would be the most grueling portion of the hike. By then, they’d left the official trail and were hugging an 800-foot-high cliff known as the North Carolina Wall. They slowly made their way toward their final destination — a large rock outcrop called The Sphinx, which resembles its namesake. The day was sunny and clear, with a few gusts of wind. The only obstacle left was small: a six-foot wall of rock called the Tree Climb. It was nothing that any of the men, with dozens of years of gorge hiking under their belts, couldn’t handle. Shortly after noon on that Saturday in May of 2016, Jeremy started to hoist himself up. But then, something went terribly wrong.

Jeremy is used to helping people when things go awry. He works in information technology at Mission Health in Asheville. After he solves one problem, another inevitably arises, and the cumulative effect on Jeremy is that people transfer their stress and anxiety onto him. He began hiking to decompress. In the woods, nobody asks you to fix their computer.

He had been a hiker for years. As an Eagle Scout, he completed the 77-mile Foothills Trail in western North Carolina and South Carolina. In his 20s, he rediscovered the power of a walk in the woods and began to spend every weekend looking for hikes. He returned to Linville Gorge a decade ago and kept going back. There was something spiritual about it.

He started a blog, The Carolinas Backpacker Chronicles, and began documenting his increasingly ambitious trips. He found a community of hikers on a local message board, linvillegorge.net, and soon, the hiking groups grew larger and larger. After a few years, Jeremy was inducted into a fraternity of hikers known as “Gorge Rats,” who show their membership by wearing special patches, appointing themselves ad hoc trail ambassadors, and spending as much time as humanly possible in the gorge.

There are some 39 miles of trails in Linville Gorge, most of which are not well marked. That’s by design. The majority of the gorge is, after all, a federally designated wilderness area. Because of that, when people wander away from the main route in search of better views or bathroom breaks, they create informal paths known as “social trails.” Hence, folks often get lost. Burke County Emergency Services fields, on average, some 70 calls a year from people needing help in the gorge — thanks, in part, to ankle-twisting rocks, a lack of cover from the heat, steep cliffs, and confusing footpaths. But the payoff of a hike in the gorge can be spectacular — a jaw-dropping view of the yawning expanse from atop Shortoff Mountain, an occasional glimpse of the elusive Brown Mountain Lights, or a look at the surrounding rock faces from the boulder-filled Linville River. All of that draws in hikers, many of them inexperienced or unprepared — often, they get lost, hurt, or worse.

Jeremy had plenty of experience. And he needed help anyway. 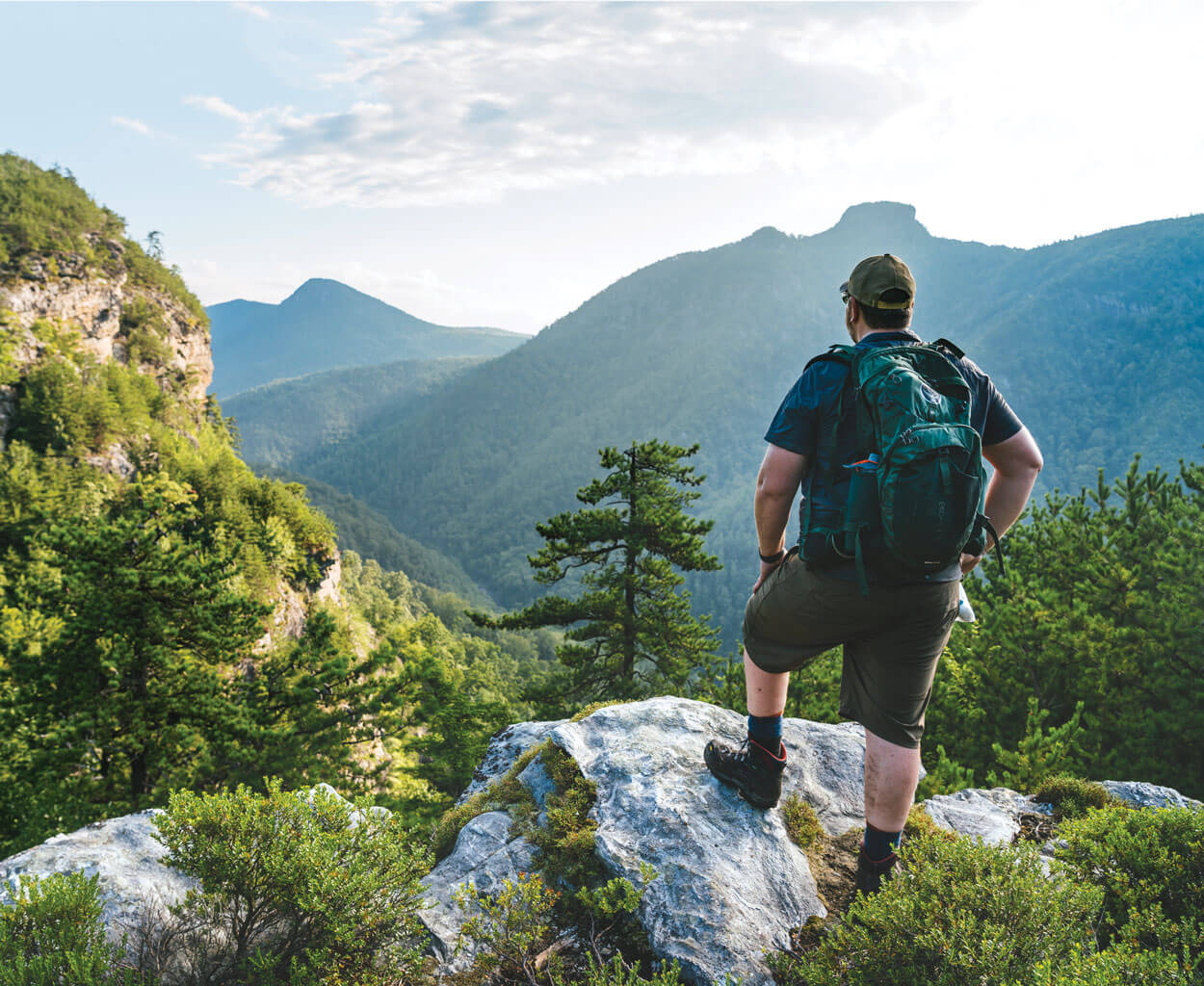 Following his fall from the side of a mountain, Jeremy has progressed from determination to fear to depression — and, finally, to triumph. photograph by Adam Mowery

A gust of wind is what did Jeremy in. He was on the Tree Climb when a burst of air bounced off the North Carolina Wall and hit him from an unexpected angle, picking him up and throwing him down a steep slope. The mountainside had been stripped of vegetation by a wildfire in 2013, leaving nothing to stop his fall and nothing substantial for him to grab on to. As he fell, he clawed at the blackened dirt. At one point, just before he tumbled over a 30-foot cliff, he managed to get his hands around a small pine sapling. The whole thing uprooted. In midair, he looked at it, and then tossed it aside.

Jeremy finally came to a stop some 200 feet below — where he’d started his hike.

“Somebody said, ‘Jeremy’s gone,’” Kenny Fleming, a Gorge Rat, remembers. Most of Jeremy’s fellow climbers didn’t see the fall, Kenny says. “I said, ‘What do you mean, Jeremy’s gone? Where the hell’d he go?’ They pointed down the mountain, and my immediate thought was, He’s dead.”

Then, Kenny saw Jeremy move his arm. And that’s when the rescue began.

First, the rest of the Rats had to get to Jeremy. One of the hikers, a then-18-year-old cross-country runner nicknamed Navigator, scrambled down the steep and rocky mountainside as fast as he could. Others called 911. Even in that remote area, there was enough cell phone signal to get a call out. But it was hard to describe to emergency dispatchers precisely where Jeremy was. The Rats were all off the main trail. Jeremy was in a steep spot that even experienced hikers wouldn’t normally venture to. Navigator rushed back up to the trail and ran for several miles to meet medics at the parking lot where their hike had begun.

It took more than four hours for medics to reach Jeremy. Once there, they discovered his shattered knee. His broken leg. His pinched femoral artery. Jeremy drifted in and out of shock. He shivered. He kept repeating his brother’s phone number and his insurance information. The medics gave him an IV drip of painkillers. A friend gave him a cigarette.

By then, a rescue crew had assembled to figure out how to get Jeremy out of the gorge. He couldn’t walk, so one idea was to carry him on a backboard. But the shortest route to a road was staggeringly steep. The best route was to go down to the Linville River and out the other side, but that was scrapped, because a two-man team carrying a full-grown man for miles would require constant breaks and would be treacherous. Another idea involved setting up a system of ropes and pulleys to pull Jeremy up and over a ridge. Both of those plans were too complex and might have taken up to 24 hours.

When dispatchers made the decision to call in a rescue helicopter that had been training in the area, even that plan came with some serious risks. The swirling winds in the gorge would make it hard to maintain enough lift for the chopper to hover long enough for a rescuer to rappel down, get Jeremy stabilized and hooked into a basket, and then lift off. It was perilous.

It was also the only viable option.

Just before 5:30 p.m., Jeremy’s friends cleared out, and the Black Hawk swooped in. By this time, Jeremy was conscious enough to shoot iPhone video of the rescuers descending toward him: black figures hanging on thin ropes. Once they’d strapped him into a basket and started hoisting him up, another gust of wind forced the pilot to pull up and out over a deeper section of the gorge — with Jeremy and a first responder dangling by a cable — to remain steady. At one point, they hovered some 500 feet above the river.

Once Jeremy had been pulled in, the Black Hawk flew to Foothills Regional Airport. Jeremy was then transferred to another medical airlift, and, seven hours after the fall, he finally arrived at Mission Hospital in Asheville. There, in the swirl of busy nurses and beeping medical equipment, Jeremy’s parents arrived and saw a faraway look in their son’s eyes.

“What are you thinking about?” his mom asked.

“I’m plotting my return to The Sphinx,” he said. 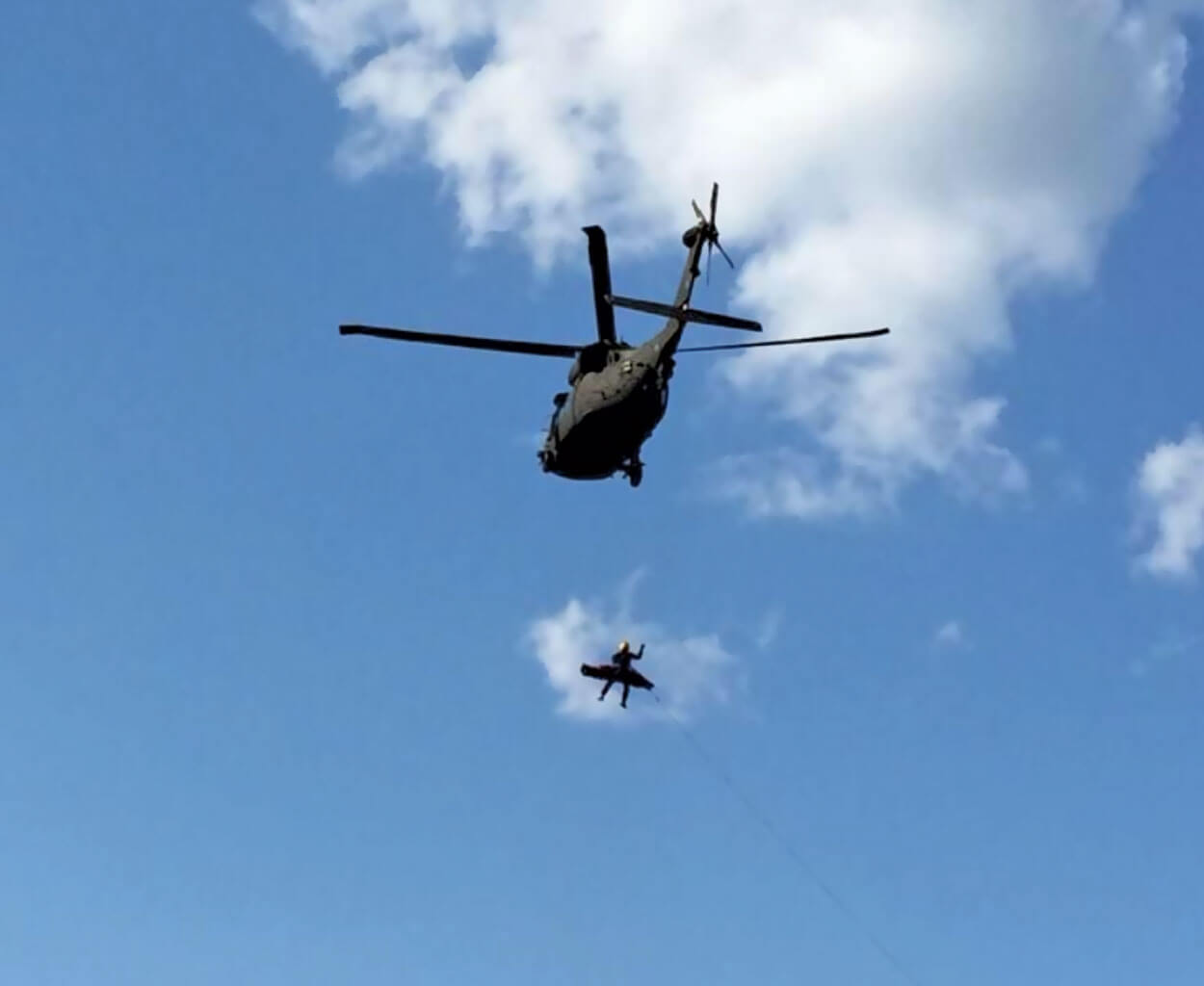 Rescuers weighed several options before calling in a Black Hawk helicopter to lift Jeremy out of the gorge. photograph by Sean Emery

Jeremy spent almost two weeks in the hospital, and then another two months in rehab in Weaverville. Finally, he went home to Asheville, confined to a wheelchair, and felt isolated in a way he’d never felt before. He needed to get away, so a friend drove him to the gorge and wheeled him to the edge of an overlook. The Sphinx was on the other side of the canyon. For the first time, he was able to see how far he’d fallen.

“What are you thinking about?” his mom asked. “I’m plotting my return to The Sphinx,” he said.

A few months later, his knee still hurting, Jeremy began hiking again. He hiked to The Chimneys. He traveled to Colorado and Utah. He limped his way down the trails like Quasimodo, his leg frozen at a 20-degree angle. By March 2018, three months after he had knee-replacement surgery, he was ready to go back to The Sphinx. He started talking to friends. Some were supportive. Some less so. “I almost saw you die there once,” Kenny told him.

The return hike was uneventful — until he reached the Tree Climb. To prevent another accident, friends secured climbing ropes and a harness for Jeremy. He felt nauseous. At the top, he made the final steps to The Sphinx, arms raised, a bandanna on his head, sunglasses concealing tears. Nearly two years after he’d fallen, Jeremy finished his hike.

And then he got depressed. For about six months, he stopped hiking. Therapists thought that it might be the anticlimax of finally reaching his goal. For two years, his focus had been on returning to The Sphinx. Now that he’d done it, what more did he have to look forward to? Jeremy thought a lot about a quote from one of his favorite documentaries, 180 Degrees South, in which two men try to re-create a mountain-climbing trip to Chile. The original climber said, “Any mountain, at certain times, is safe, and at other times, it’s super dangerous.” But a destination is just a destination: “It’s the quest that’s what’s important,” the climber said. “The transformation is within yourself.”

Earlier this year, a voice in Jeremy’s head asked him a simple question: Where are you happiest?

He knew the answer immediately: Out hiking.