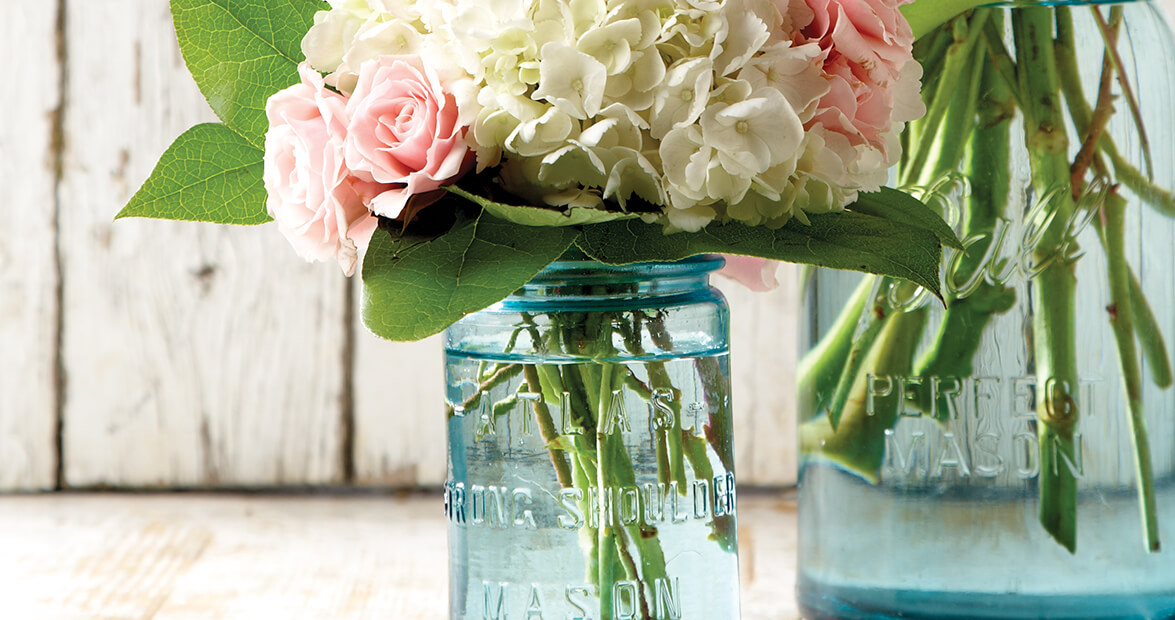 At the top of the list of endlessly useful objects, one item reigns supreme in North Carolina: the Mason jar, that all-purpose glass workhorse that’s nearly synonymous with the South. Yes, there’s duct tape, nail polish, and WD-40. All useful. But people don’t buy duct tape or nail polish in boxes of 12, as they do Mason jars. How does an everyday object with zero aspiration to sleekness, plus lids that come in two pesky, prone-to-get-lost pieces, become this object of glory — and if not glory, then intense affection?

Original intent is always a good place to start an academic study such as this one. The Mason jar is a container meant for home preserving. It was patented in 1858 by a tinsmith named John Landis Mason. And it’s true that, even if you don’t wear a calico dress or bib overalls, nothing is quite so pretty, or inspires quite the feeling of satisfaction, as pantry shelves lined with Mason jars full of the bounty of the garden or farmers market. Red tomatoes, green beans, and a plethora of pickles. Orange peaches, yellow pears, and squash. A veritable crayon box of self-congratulatory accomplishment, never mind good eatin’ until summer rolls ’round again.

For another kind of preservation, Mason jars are excellent for leveling the la-di-dah playing field of craft cocktails. Mint juleps, old-fashioneds, mojitos, sangria — anything with fruit or leaves looks appealing in a Mason jar, including non-potent potables, like iced tea and lemonade. I store my homemade vinaigrette in a Mason jar, to simplify measuring, mixing, and pouring. Why, some folks just throw their entire salad into a Mason jar, shake it, then fork it straight from the glass. Same for gazpacho. Hugely handy.

Beyond the pantry and the porch, check the toolshed, where the jar’s sturdy, broad shoulders are pretty much made for storing nails and tacks and screws. On to the playroom, for crayons and paintbrushes, and into the bathroom for cotton balls and Q-tips. Childhood wouldn’t be the same without Mason jars in spring, for collecting caterpillars, and in summer, for lightning bugs. With a Mason jar in the cabinet, you’ll always have a vase for daisies, Queen Anne’s lace, a single sunflower.

But if you really want to know what people are up to with Mason jars, venture onto Pinterest, the DIY epicenter of the Internet. In the right hands, Mason jars become citronella candles. Strapped to sticks and with the addition of votive candles, they’re lanterns. Mason jars can be sewing kits, snow globes, terrariums. And then there’s this: You can bake palm-size pies right in the screw tops. Which negates one of my favorite activities involving Mason jar tops: banging it on the kitchen floor to hear the pop! of the breaking seal.

So beloved, so iconic, and so useful, in fact, are Mason jars that you can now buy ones with mug handles and wineglass stems; they come small enough to serve as salt and pepper shakers, and large enough to cover with a glass round and use as a coffee table.

Corks to chowchow, pebbles to peaches. Tacks to tees, buttons to beads. Pencils to pins, shells to seeds. Make mine a Mason.

Ladies and gentlemen of the jury of the indispensables, I offer you this final, ineluctable proof. On that proverbial desert island, duct tape will be largely useless. With a Mason jar, however, you can drink coconut milk, preserve papaya, make sand castles, hold a spray of hibiscus, collect rainwater to drink, bail seawater from the boat you’ll build, and use the reflecting lid to signal a passing boat, never mind as a mirror.

And if it should break, you’ll have a sharp edge for sawing branches, cleaning fish, and doing your nails. Which is more than can be said for WD-40.