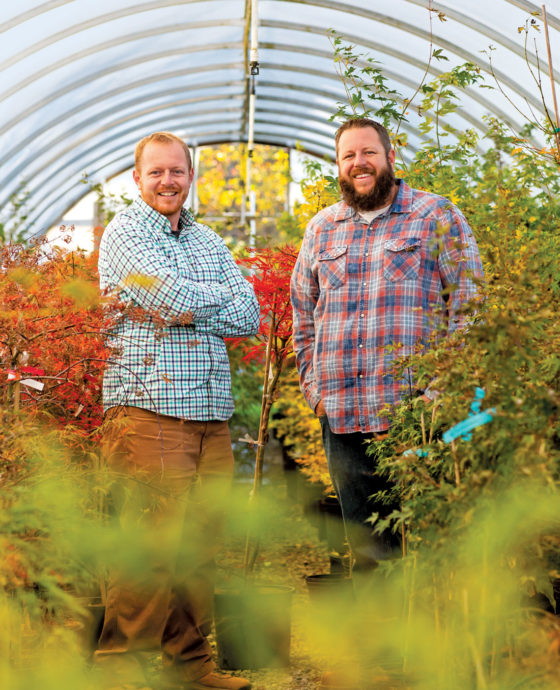 Tim and Matt Nichols make trees. OK, OK, here’s where some readers will say, “Wait a minute! You mean they grow trees.” Well, yes, Nichols Nursery does grow trees: many different kinds — tens of thousands of them — in 20 greenhouses in East Flat Rock. But, with apologies to Joyce Kilmer, the brothers have also created thousands of brand-new cultivars of Japanese maple trees for their mail-order plant business, MrMaple. How? The Nicholses graft a cutting from the top growth of one tree and attach it to the hardy rootstock of another.

Matt compares grafting trees to dog breeding, where the best traits of each dog are combined to make a new breed. “We grow a graft for a known set of traits,” Matt explains. “From seed, there’s a lot of variability, but with grafting, you lock in those traits: By grafting, you have a breed of dog; with seedlings, you have a mutt.”

Each Japanese maple cultivar they create may look slightly similar to a like variety, but each is unique, even when compared to its parent. All of the new trees do have one thing in common, though — their roots. And for that, the Nichols brothers have their maternal grandmother, Dolly Hill, to thank: Unbeknownst to Dolly, who passed away before MrMaple took off, her cherished trees were not only an inspiration for the Nicholses, but also the literal roots of their Japanese maple business. Seeds from her trees are now used to grow the rootstock for the nursery’s Japanese maple cultivars.

In the 1950s, Dolly had a crush on a green Japanese maple tree that a friend was growing in her yard in downtown Charleston, South Carolina. Dolly asked if she could have some seeds from the tree to take back to her home in Henderson County. Her friend did her one better and dug up one of the trees for her. Dolly brought it home in a metal bucket and planted it in her garden, where it thrived. So much so that decades later, a collector offered her $10,000 for the tree. She declined.

Over the decades that followed, she sold many other Japanese maples, planting trees in rows so that landscapers could easily buy and dig up what they wanted. After she broke both hips in a fall, Tim and Matt helped tend their grandmother’s collection of maples. There, the brothers’ interest and understanding of propagating trees grew.

As kids, Tim and Matt also got a taste of the business side of selling maples from their dad, Norman, founder of Nichols Nursery. For Norman, his love of Japanese maples was born one spring when he was visiting a friend and spotted a neighbor mowing down some red Japanese maple seedlings that were just sprouting. He asked to gather some, took them home, and planted the young trees.

“When I got land of my own, I started getting more of those little red seedlings,” he says. “When I built this house, I would sell 25 or 30 Japanese maple seedlings that I grew up on this field, go to the flea market, sell them at $25 apiece, go buy some more materials, and work on the house.”

Still, growing Japanese maples was mostly a hobby for Norman, who worked at the local GE plant during the week and sold trees on weekends at tailgate markets around Hendersonville. And he always brought Tim and Matt along. While Dad peddled maples, the boys cut their teeth selling their own pots of plants, like colorful Johnny-jump-ups, to go with the maples.

Then, in the early ’90s, Norman saw a book on Japanese maples that showcased the array of colors and leaf patterns and shapes possible in the trees. “I was blown away with all the varieties,” he says. “Now, the world’s wide open. But how do you get there? You learn to graft.” Norman asked a former high school agriculture teacher to show him, but it turned out that learning to graft required some trial and a lot of error — maybe one out of 100 would take, he says. Eventually, he figured out how to keep his new creations alive. “Then I taught the boys to graft and got out of their way,” he says.

Matt and Tim’s fascination with Japanese maples, and plants in general, continued to deepen at Western Carolina University — Matt, Class of ’04; Tim, Class of ’12 — although neither studied horticulture. Instead, they learned from doing, digging into books, and talking with growers. Even before Matt graduated, the brothers realized that their passion could be their careers. Their dad wasn’t so sure. “I think he thought, ‘Oh, no, you can’t support two people with just this little thing. This is a hobby,’” Matt says.

In 2011, as their collection of, and passion for, trees grew, the brothers started clearing land for the next chapter of the family’s nursery. Instead of growing their trees in the ground, then digging them up to sell like their dad and grandmother had done, they decided to focus on growing grafted trees in containers.

They were excited by unusual creations and grew an inventory of different kinds of trees, including thousands of Japanese maple cultivars collected from the wild around the world and from nursery-men and -women who shared their passion and curiosity. Collecting specimens wasn’t always easy: On international trips, like their two visits to Japan, the brothers each filled out permit requests to bring back seeds or seedlings. Sometimes, customs let them in; sometimes, they didn’t.

The brothers quickly went from selling 200 to 300 trees a year to grafting 600 trees a day during their restocking season, from December to March. 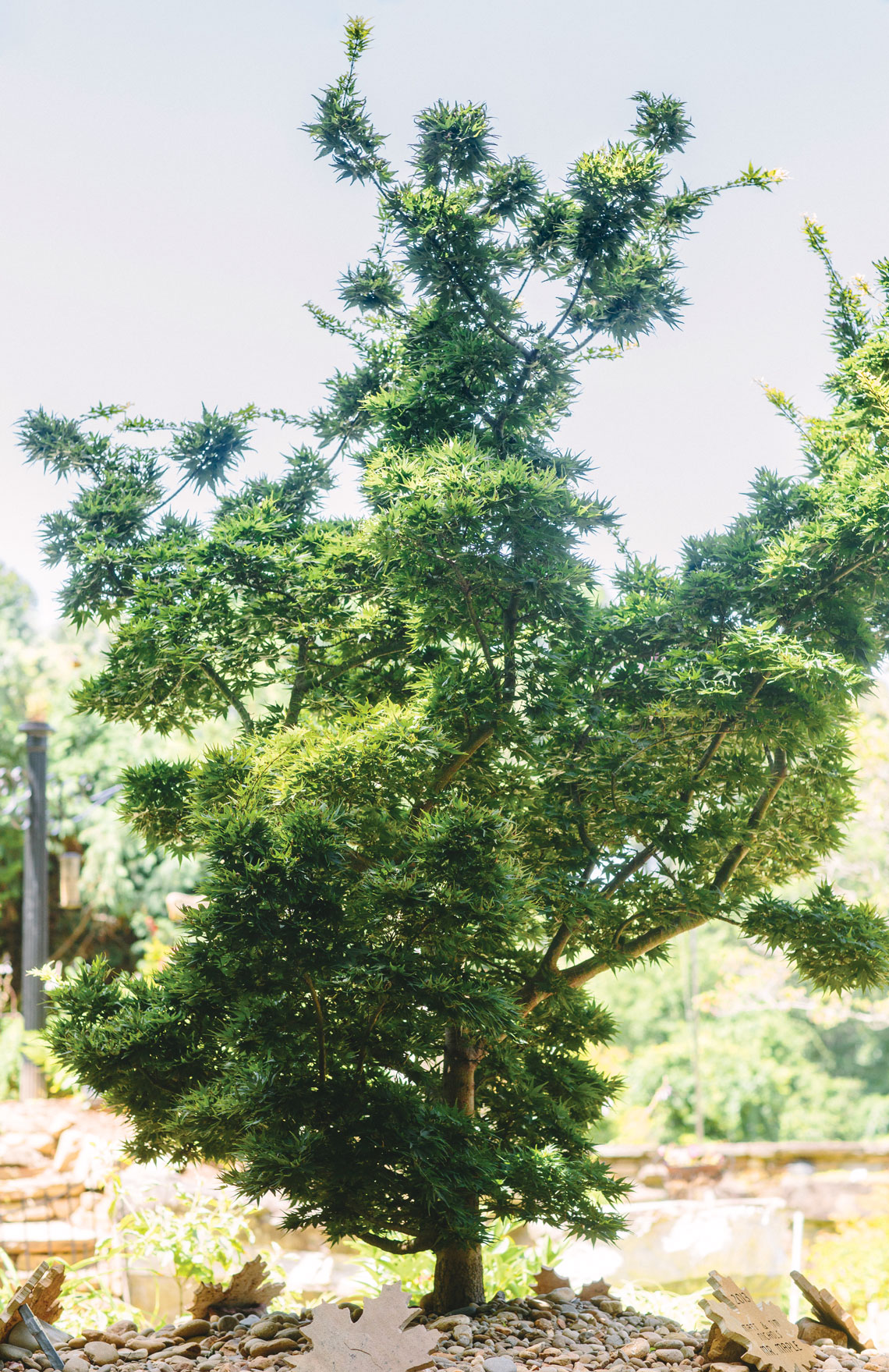 Japanese maples like the Mikawa yatsubusa thrive in the climate of Henderson County, which is similar to many mountainous regions in Japan. photograph by Tim Robison

They became masters of their craft, teaching grafting, helping rewrite books about Japanese maples, serving as presidents of the Japanese Maple Society, and becoming rock stars in the niche world of plant collecting. They hosted gar-den clubs from across North Carolina at Hill Stone Arboretum, which was built by their stonemason uncle and serves as the backdrop in many of the brothers’ maple videos on YouTube. And they hosted open houses on the Monday of Memorial Day weekend that attracted as many as 500 people, and which they hope to host again in 2021.

By 2018, the brothers had an inventory of thousands of unique trees on their new MrMaple website. But there was one problem: For every tree, there was an origination story to go with it — or in the case of ancient varietals from Japan, a haiku that further explained their purpose — but neither Tim nor Matt had the time to launch a site worthy of all their trees. “Every tree has a story,” Tim says.

“Every tree has a story.”

The solution? What sounds like a marketing scheme but is probably marketing genius: “10 at 10 Tuesdays.” At 10 a.m. every Tuesday for the past two years, MrMaple has released 10 new trees (plus a couple more) for collectors — complete with the trees’ origination stories.

Today, the brothers have 20 greenhouses, where they grow not only thousands of different kinds of maples, but also about 150 different kinds of ginkgos, 20 varieties of giant sequoias, and 45 varieties of redwoods, among other trees and shrubs. Every day, they ship a truckload of trees to avid collectors and first-time growers across the country. During the Covid-19 pandemic, when people have been focusing more on gardening and home improvement, the Nicholses’ business has doubled since last year. “We are amazed to be this busy,” Matt says.

And between shipping trees, recording videos, and identifying new cultivars of trees sent to them from other growers, the brothers still enjoy their passion of creating their own trees. Because at the end of the day, Matt says, “We’re just big plant geeks.”