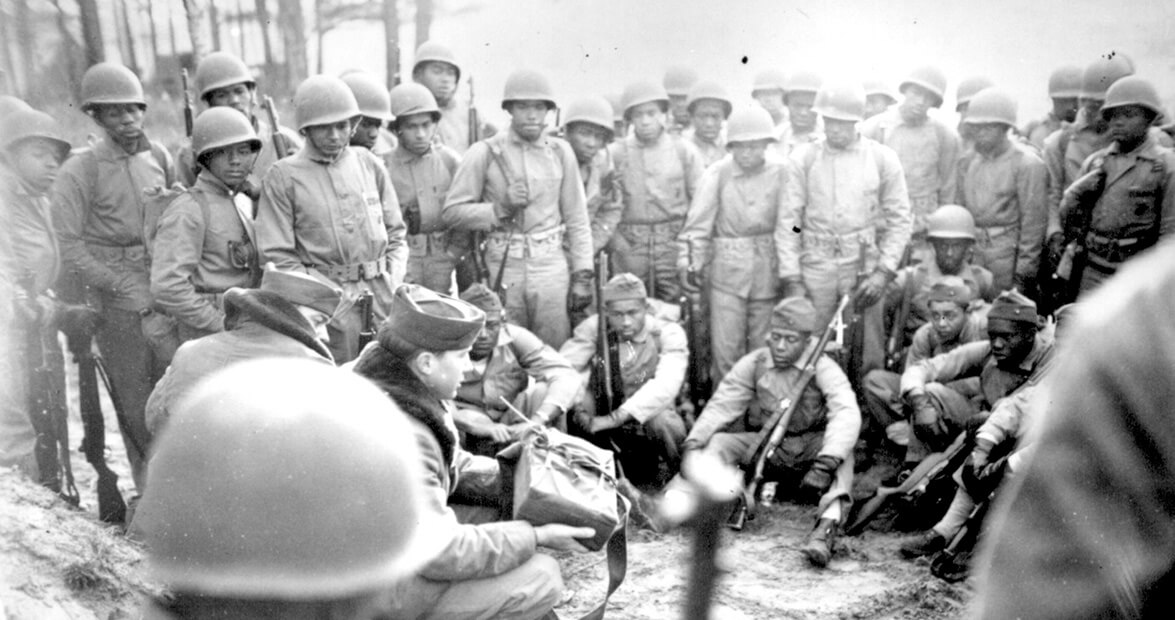 It was 1943, and Preston was at a military base in Ohio. A former railroad worker, his enlistment had been deferred the year before so he could complete training as an electrician. He was one year into a four-year program when his deferment wasn’t renewed. In Ohio, Preston completed a battery of tests and was marched in front of a panel of four officers from the Marine Corps, Navy, Army, and Coast Guard.

The Marines had the first pick.

Preston was on the train to boot camp in Jacksonville when his wife called to tell him about a new deferment, but it was too late. He was going to be a Marine, and as one of the first 20,000 black men to join the Marine Corps, he was going to help make history.

The Marine Corps was the last branch of the military to accept African-Americans, and they did so only by executive order: President Franklin D. Roosevelt’s creation of the Committee on Fair Employment Practice in 1941 had outlawed discriminatory hiring practices for government agencies.

There was resistance. Maj. Gen. Thomas Holcomb, the Marine Corps commandant at the time, is quoted as having said, “If it were a question of having a Marine Corps of 5,000 whites or 250,000 Negroes, I would rather have the whites.”

African-American recruits were not sent to the established training centers at Parris Island, South Carolina, or San Diego, California, but to Camp Montford Point, a segregated base near Camp Lejeune in Jacksonville. The Marines who trained there between 1942 and 1949 helped pave the way to the modern Marine Corps. But becoming a Marine isn’t easy, and for the first African-Americans to do it, the challenge was even harder. 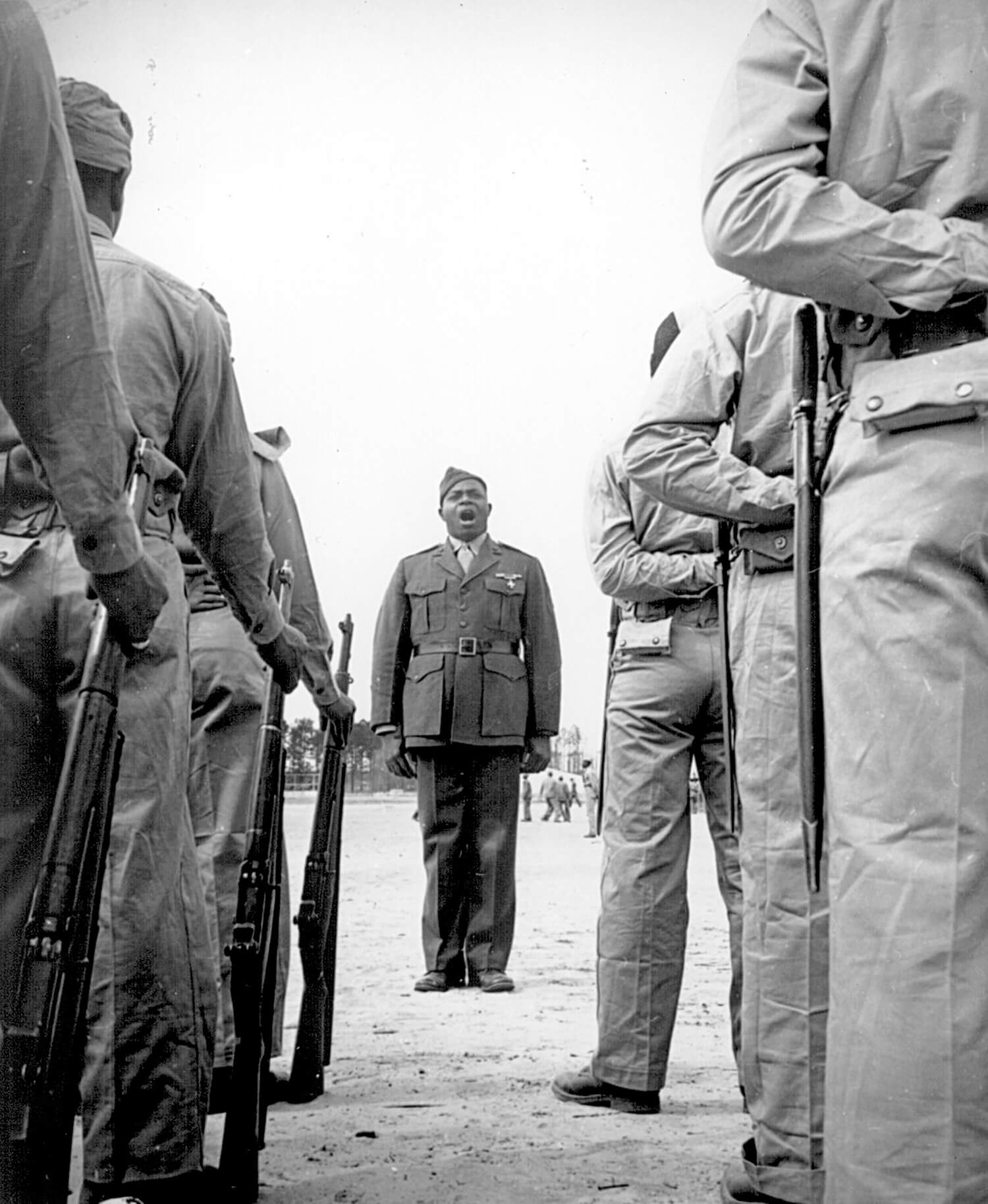 In 1943, Sgt. Maj. Gilbert “Hashmark” Johnson — so nicknamed for his many service stripes — became one of the first black drill instructors in the Marine Corps. Camp Montford Point was later renamed for him. photograph by Records Administration

Initially, there were no African-American officers at Montford Point, and the recruits, organized into platoons of about 30 men, trained under white instructors. As with any boot camp, the experience at Montford Point was physically trying. Preston recalls a standard requirement: having to run everywhere.

Once, he was sent back to the barracks to retrieve some gear. Knowing he’d be out of view of his instructors, Preston walked, only to get ambushed along the way by an instructor checking to make sure he was running. After that, Preston did everything at double time.

At the rifle range, if a recruit made a mistake or didn’t follow orders, he’d face a typical boot-camp penalty: The instructors would make him carry a water-soaked log around the perimeter of the range. “They didn’t let you off easy,” Preston says. “I found out early you had to follow the rules, because the punishment was terrible.”

After training, the Marines deployed to segregated units. More than 13,000 Montford Point Marines served in the Pacific theater during World War II. They made up the ranks of the 51st and 52nd defense battalions — used to secure islands taken from the Japanese — or worked in supply units or as military police.

Outside of Montford Point, the Marines faced discrimination because of the color of their skin. Their uniforms couldn’t shield them from the reality that in the eyes of many, they were second-class citizens.

When Marines got off the train in Jacksonville, they were greeted by a sign that read, “No blacks on this side of town.” African-American recruits could only go to Camp Lejeune if they were accompanied by a white Marine.

For recruits not used to the segregated South, coming to Montford Point for training was jarring. F.M. Hooper Jr., a native of Brooklyn, New York, reported for training in 1948. Hooper never experienced segregation until he noticed that a curtain divided the dining car into white and black sections on the train to North Carolina. When he finally got to Jacksonville, the café in the bus station wouldn’t take his meal ticket.

“I went and paid at a black restaurant,” Hooper says.

‘Every Marine will know’

In 1948, President Harry Truman signed an executive order mandating the desegregation of all branches of the military. In September 1949, Montford Point closed, and by June 1950, the Marine Corps was fully integrated.

For years, the Montford Point Marines remained relatively unknown to the American public. They weren’t as recognizable as units like the World War II fighter pilots known as the Tuskegee Airmen.

“The Tuskegee Airmen are the glamour boys,” says Melton McLaurin, author of The Marines of Montford Point. “There is that mystique with those who fly airplanes, especially fighter pilots.”

Gen. James Amos, former commandant of the Marine Corps, campaigned to get the Montford Point Marines recognition for knocking down racial barriers.

“Every Marine … from Private to General … will know the history of those men who crossed the threshold to fight not only the enemy they were soon to know overseas, but the enemy of racism and segregation in their own country,” Amos told the National Montford Point Marine Association on their 46th anniversary convention in 2011. “The Marine Corps is better today because of the legacy of service of African-Americans … from those who served in the Revolutionary War … to the Marines of Montford Point … to those forward, deployed and engaged right now in the toughest part of Afghanistan.”

In 2012, the Congressional Gold Medal, the nation’s highest civilian honor, was awarded to the more than 360 surviving Marines who trained at Montford Point, and a memorial is being erected in Jacksonville.

“They fought for the right to fight, when their own country and their own military branch didn’t want them,” says Alfreda Carmichael, treasurer of the National Montford Point Marine Association. “They never gave up, because they were fighting to protect the people that they love, and had faith that God would see them through despite what others said or did to them.”