If there’s a state-sanctioned museum — you know, the ones with the brown highway signs — that’s more charming and authentic, yet whose exhibits are more daunting verging on scarifying, than The Country Doctor Museum in Bailey, I haven’t seen it.

Charming and authentic because, in a town with a population of 600, it’s entirely fitting that the museum’s main building is tiny, consisting of only three rooms, each of which was, at one time, a country doctor’s office — likely located right in the front of his own home. Vollis Simpson, of Wilson’s Whirligig Park fame, hauled the buildings to Bailey back in the ’60s, when several Nash and Wilson county country doctors and other volunteers realized that medicine was changing and that house calls and other practices of rural practitioners were vanishing and needed to be preserved. 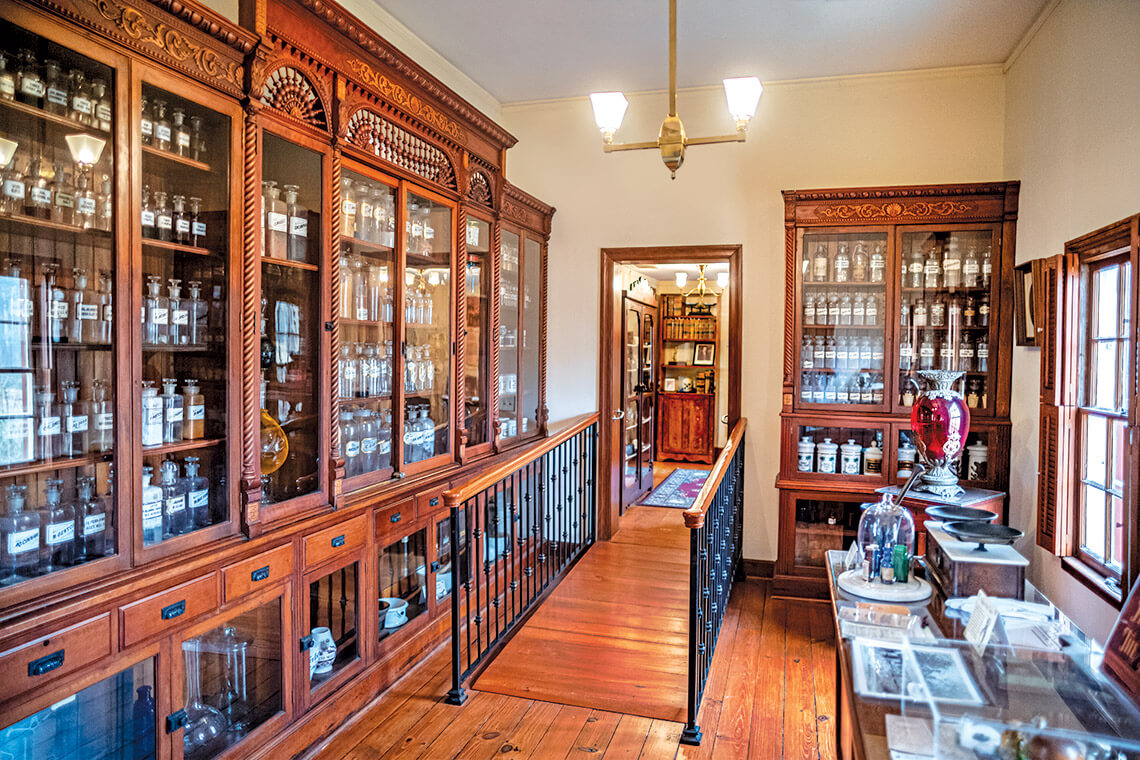 The dozens of bottles that fill the apothecary cabinets at The Country Doctor Museum once held tonics, syrups, and elixirs — and some still do. photograph by Charles Harris

Daunting verging on scarifying because, well, you be the judge. The Apothecary Room seems safe enough, with its beautiful 1890 cabinets holding jar after jar of ingredients for medicines of the day. Lotio Calamine Carbol will be familiar to anyone who’s had a run-in with poison ivy. Cinnamon, chalk, zinc — all familiar enough. But here’s Tincture of Serpent, putting me in mind of Hogwarts, and no circa-1900 medicine cabinet would be complete without crocus blossoms, I reckon. In case you don’t recognize G. Tragac or Anthemus F.L., there are tour guides to explain what each mysterious powder was used for. Got worms? Find potion portions in the formulary index, where “Flatulence” comes before “Freckles,” which comes before “Frostbite.” And there, for you Dickens fans, is “Chilblains.”

With Play-Doh, Annie Anderson, the museum’s director and frequent tour guide, demonstrates pill-making of the late 1800s, a laborious process in which dry ingredients were mixed with oil or water, rolled into a long, skinny worm shape, and then sliced with a multi-toothed metal cutter called a pill roller. Voilà. Not to be confused with the purple pills that are shaped like a — wait, is that a tiny coffin? Yes, those pills contain mercury bichloride. Certain shapes of pills alerted the taker that here, danger possibly lies. If your vision wasn’t 20/20, no worries, as the bottles with dangerous cures were ridged with texture or had lids with little teeth.

Way back when, before germ theory was discovered, docs were very big on balancing out your “humors” with a good bloodletting. The bowls to catch blood, curved just so to cup your arm, are unnerving enough, but the road from bloodletting to bloodsucking is short: On top of the cabinet sits an antique urn so large, so prettily decorated with a gold rim and dainty flowers, and so boldly, unapologetically labeled “LEECHES” that it seems to better belong in a museum of renowned porcelains. Or your mantel. Suppress your shudders: A butcher at a local slaughterhouse thoughtfully provides the occasional liver for the museum’s very-much-alive leeches to nibble on, or attach to, or whatever it is they do that I don’t want to know about.

Some 80 percent of the museum’s artifacts came from eastern North Carolina, including the contents of the country doctor’s office, featuring a double roll-top desk nearly the size of a grand piano, and a ledger from 1919 with “payment for services rendered” entered as peaches ($1), hauling ($15), and a ham ($3). While Civil War surgical instruments such as a bullet probe, bullet extractor, and amputation saw are familiar, the materials they’re made of speak to the era’s ignorance of germs: If the instruments had been sterilized, their ivory and tortoiseshell handles would have disintegrated.

Hopefully, knowing that North Carolina was the first Confederate state to have a prosthetic limb program will somewhat soften the wince-inducing appearance of the lethally pointed iron hook that was likely hammered out on a blacksmith’s anvil and the “leg,” permanently wearing a leather boot, that laces like a corset around the thigh and attaches over the shoulder with pulleys. 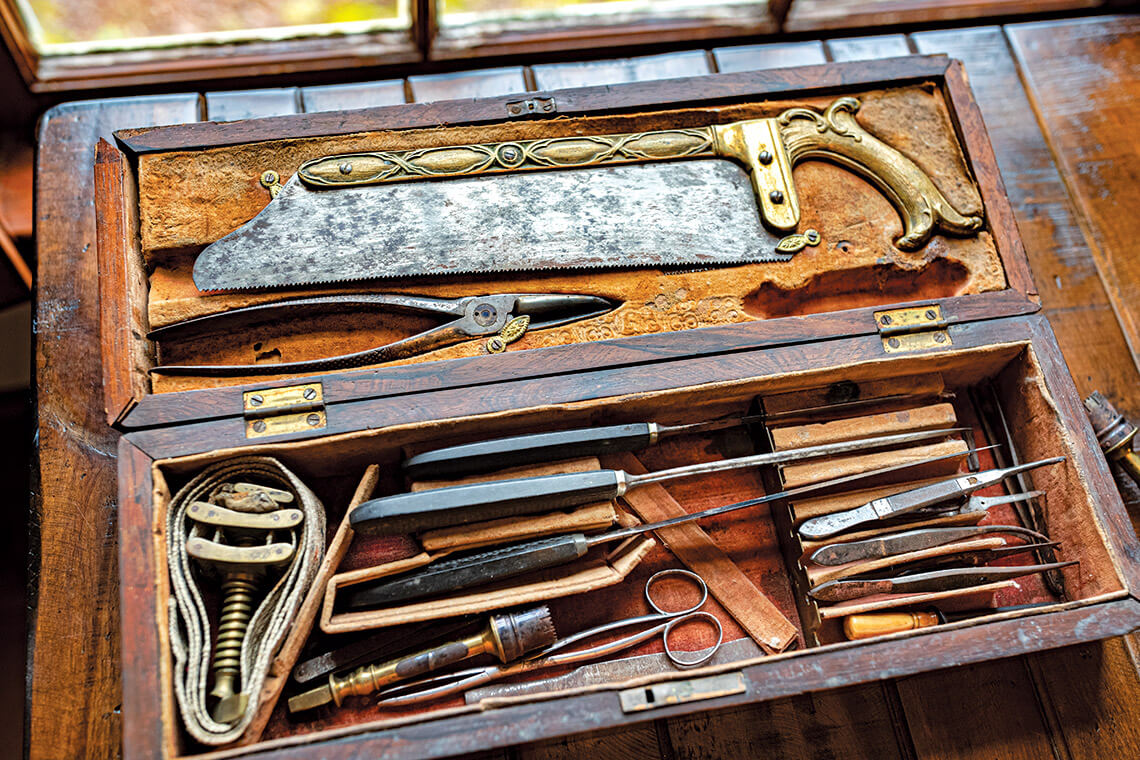 The tools of the trade for Civil War surgeons included an amputation saw and bullet probes. photograph by Charles Harris

Still, that apparatus is simpler to figure out than the one-size-fits-all stirrups, knee braces, and handles of a birthing harness displayed next door in the re-creation of a Victorian sick room. By then, men had figured out that their beards might harbor germs, so they were shaving, and women had shortened their dresses in order not to sweep outside germs inside, but bouts of tuberculosis and scarlet fever were still treated at home. Here are all the, uh, comforts of ailing at home, such as “invalid feeders” for broth — decorative spouted bowls looking like something between a child’s tea set pitcher and a genie’s lamp. A “chatelaine” is a very fancy charm bracelet worn ’round the waist, from which scissors for bandages, smelling salts for fainters, needles for shots, and other sickbed necessities dangled at the ready. Atomizers for unpleasant odors, a clever clock printed with the reminder “Take next dose,” and an elbow splint that more closely resembles a flour sieve are all here for the gawking.

Signage and explanations abound throughout the museum, including “The Backside of the Bedside” for — you guessed it — quite the collection of historical bedpans and urinals. Look for the wooden tool on the 1930s Piedmont bed, when ropes, not a box spring, provided support: That’s a rope tightener, because when one lies abed all day ailing, the ropes sag. Hence the phrase “sleep tight.”

While the museum’s focus is the 1800s through the end of World War II, possibly the most sobering artifact is more modern: an iron lung from the 1950s. Gazing at its narrow, rounded confines, the small pillow at the capsule’s opening, and the side doors for a caregiver’s hands to shift a paralyzed body elicits a solemn reminder of another era’s deadly virus. The machine is so large that it’s displayed in the Carriage House with several beautiful specimens of rural doctors’ horse buggies and Model Ts, the latter of which frankly look larger than plenty of cars on the road today.

You knew, of course, that there would be a cabinet of medical oddities stashed somewhere, and there is, complete with glass eyes, ear horns, and, under the label “The Scoop on Poop,” digestion aids including rectal stretchers. Not going there. But you can. To be entertained and educated. To be reminded and fascinated. To be steeped in history and glad for technology. And maybe, to study that wound lint picker or primitive wooden peg leg for a healthy dose of horror, too.