Smoke filters up through thinning leaves, circling above the hardwoods on Gilbert E. Futrell’s property in southern Davidson County. Futrell first saw this piece of land when he was 13 years old. It’s a beautiful tract off of Flat Swamp Road just west of Denton. On first sight, he envisioned buying it one day. And when Futrell sets his mind to something, he doesn’t give up.

This morning, Futrell’s mind is set on making his last batch of sweet sorghum syrup, which he calls “molasses,” for the 2020 season. It’s early November, later than usual, but he promised he would help a neighbor cook the juice from his crop of sorghum cane. So Futrell came out at a quarter to 7 and lit the fire.

“We’ve got our back in a corner,” Futrell says. “It has to be done now or forget it because of frost.” 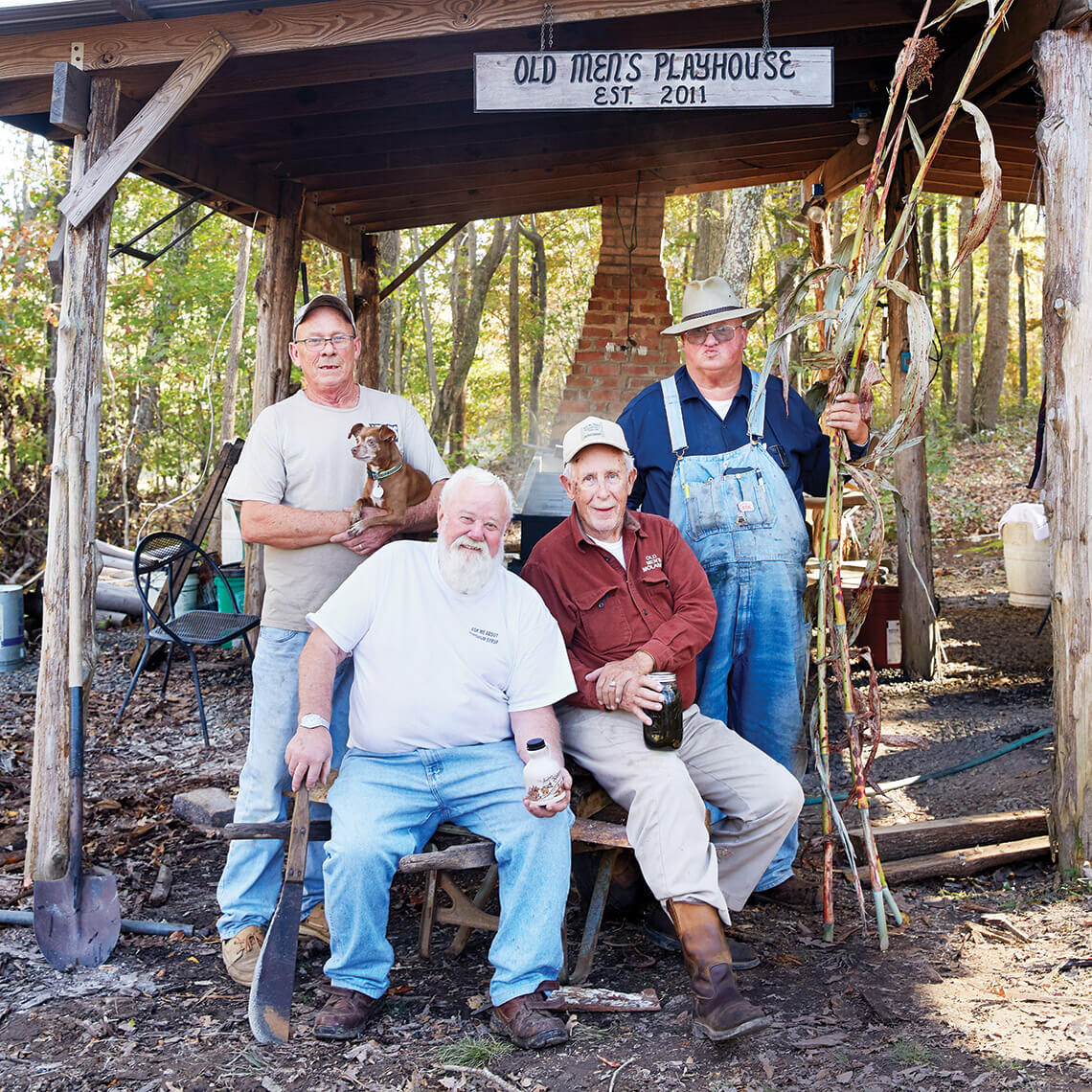 Making sorghum molasses is a four-day process. That’s four days on top of a full growing season — 90 to 145 days depending on the variety — to produce a crop of cane. A couple of days ago, Futrell and his friends stripped the leaves from the cane stalks, lopped off the seed heads with a machete ax, and cut the cane at a 45-degree angle near the ground. Yesterday, back on Futrell’s property, they fed the sharp ends through a press with a heavy metal wheel that flattens the stalks and squeezes out the juice.

Today, they plan to cook down 200 gallons of juice into 20 gallons of molasses. The process is similar to making jelly, preserves, or apple butter. Cooking off the excess liquid leaves behind a thick, sweet reward. Futrell cooks his juice in a 14-foot rectangular baffle pan set over a wood-burning fire. Dividers every few inches create a maze that forces the juice to flow side-to-side widthwise before advancing lengthwise. 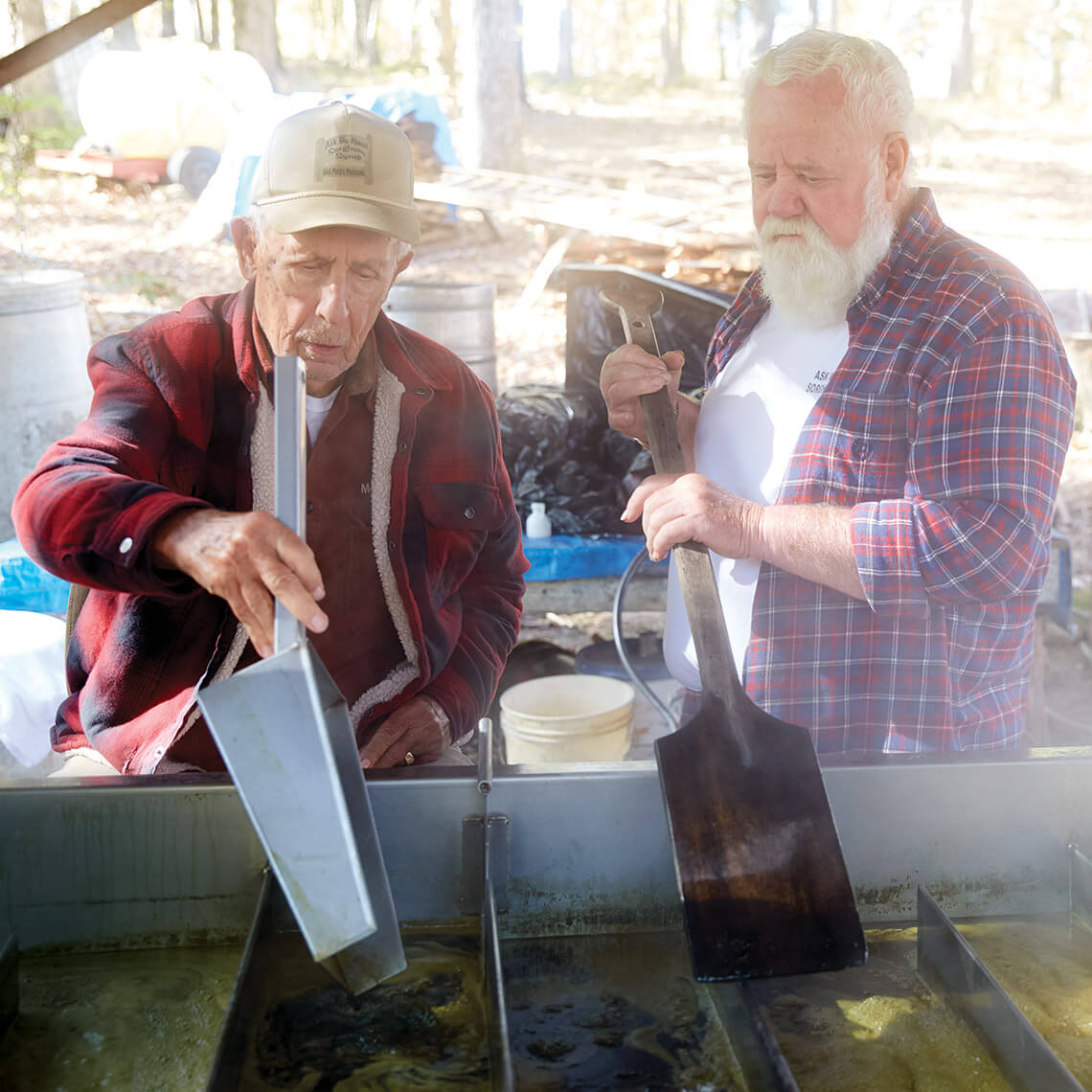 As the sorghum juice cooks down, Futrell (left) keeps an eye on its color and consistency while Randall Berrier helps skim chlorophyll off the surface. photograph by Stacey Van Berkel

Futrell sits in the driver’s seat, a chair stationed at the far end of the pan. Four other men stand alongside the pan with paddles, stirring and skimming off the chlorophyll that rises to the top. One man feeds the fire box. Steam rises from the liquid and condenses underneath the shed’s tin roof. As the juice travels the length of the pan, it turns from muddy green to golden brown. Bubbles on the surface grow from the size of “fish eyes” to “hog eyes.”

Molasses making, like many activities that require a handful of people and a common knowledge of the craft, is increasingly rare. Communities aren’t as close-knit as they once were, and their members have endless choices of ways to spend their time. Many who once held the knowledge to perform those rural rituals — such as killing a hog or raising a barn or shearing a herd of sheep — have passed on without passing down their talent to the next generation. And that next generation may or may not choose to stay on the farm. It’s difficult to explain to someone how to watch for a bubble to reach the size of a hog’s eye if that person has never been up close to a hog. 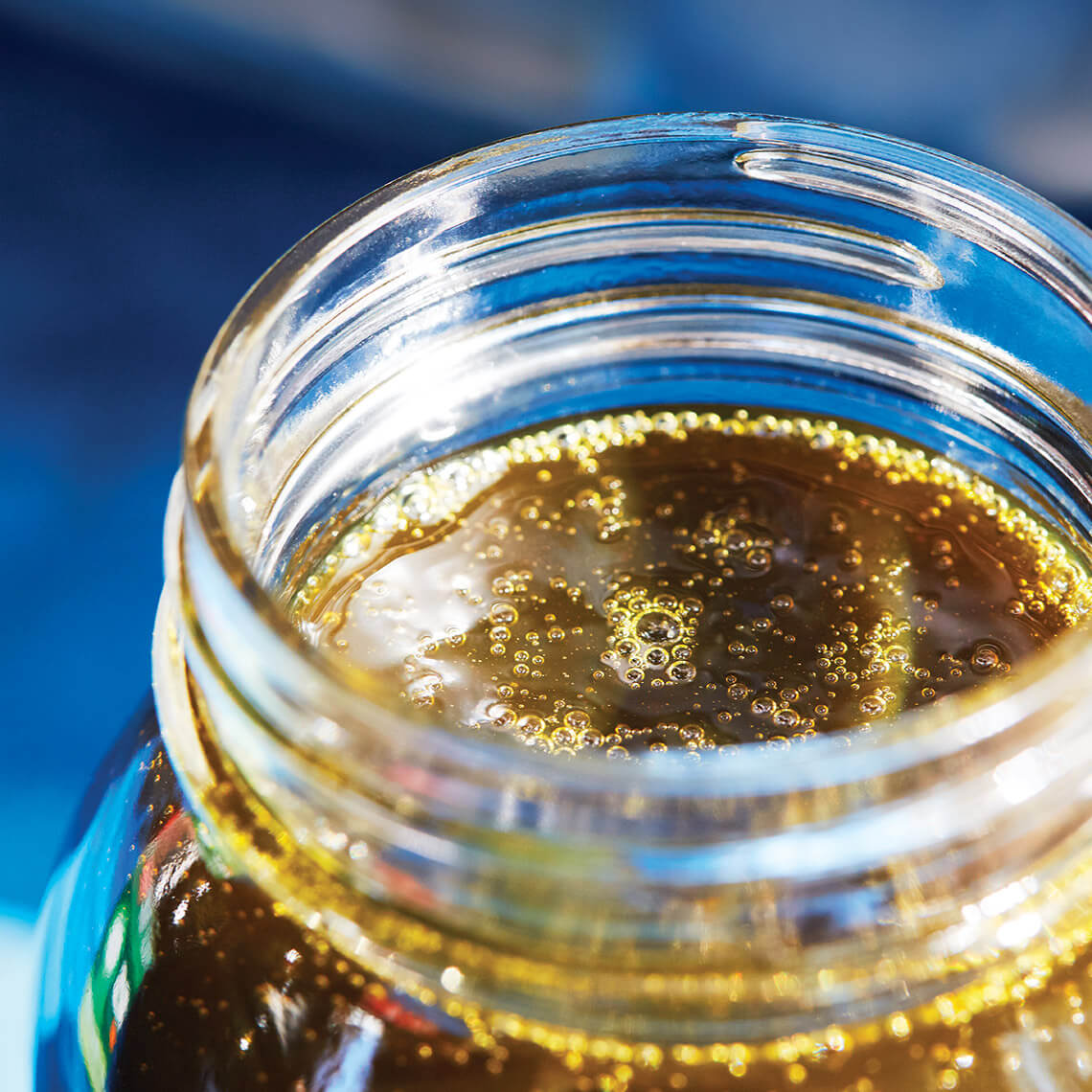 While molasses is technically a byproduct of sugar production, it’s also the common term used to describe the thickened syrup that results from boiling down juice pressed from sorghum cane. According to the National Sweet Sorghum Producers & Processors Association, sorghum molasses must be at least 74 degrees Brix — a unit used to measure sugar content — and free of any additives.

Futrell, 85, remembers his father bringing home a half-gallon of molasses when Futrell was a child. But he never saw it being made.

“What really got me into this is when I got pushed out of shape,” Futrell says. “That means getting kinda ill.”

Years ago, he purchased two quarts of molasses at a location that shall go unnamed. When he got home, his wife, Nancy, made a pan of biscuits. Futrell poured some molasses into his plate, stirred in some butter, dabbed the mixture on a biscuit, and took a big bite. Disappointment filled his mouth. The molasses was burnt.

“There’s two things in life you don’t want,” Futrell says. “A mean woman and burnt molasses.” Right then, his mind was set: He’d make his own. 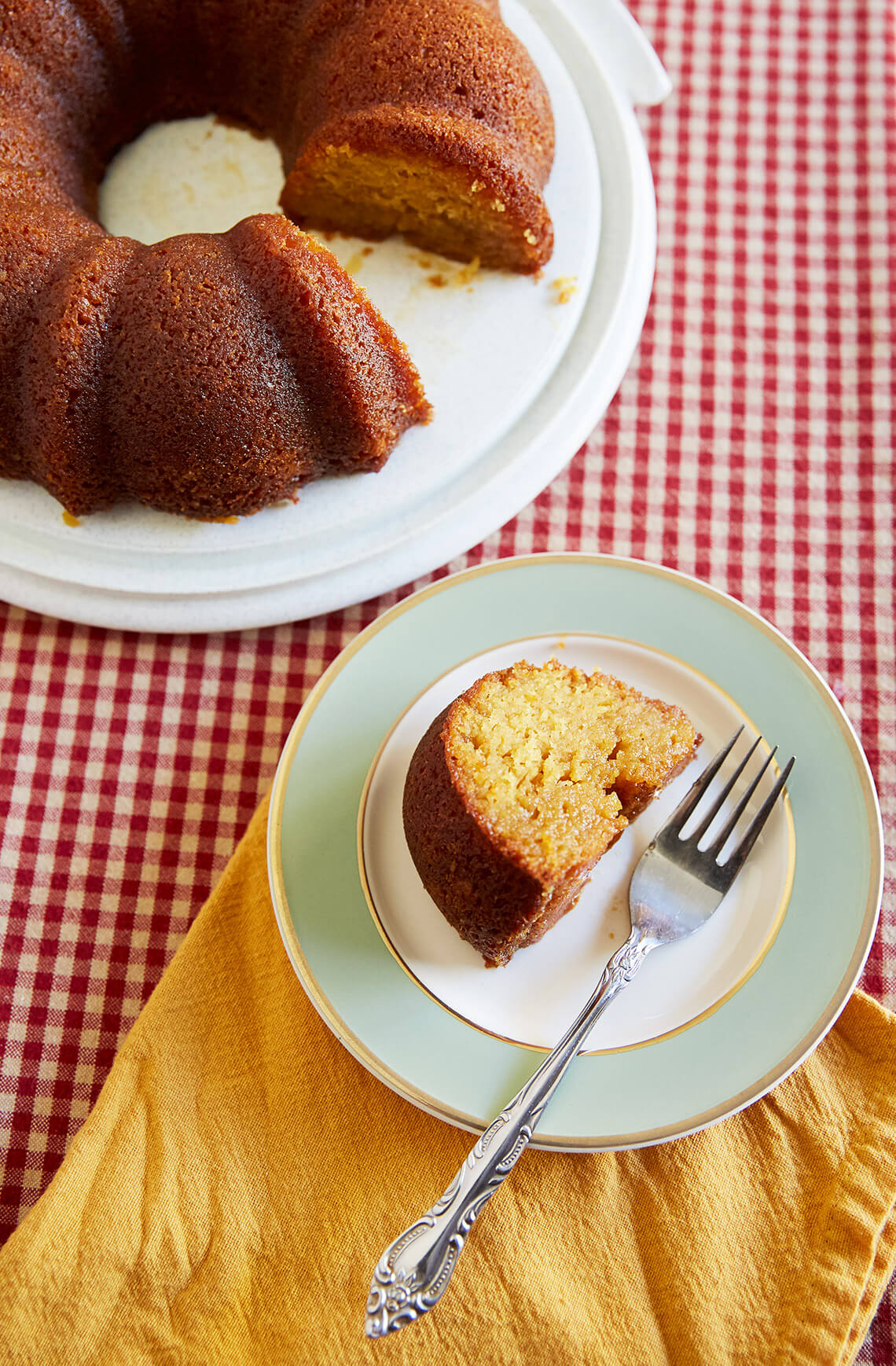 Some of Futrell’s sorghum will find its way into his wife’s baked goods. Nancy Futrell’s pineapple molasses cake has made her famous in Denton. photograph by Stacey Van Berkel

He founded Old Men’s Molasses in 2000. He sells the syrup in various sizes, from three-ounce jugs to pints. His customers have different uses for his product. Some pour it over oatmeal or sweet potatoes as a less-processed alternative to white or brown sugar. Many, including Nancy, use molasses for baking. “She’s worn out a Bundt pan making cakes,” Futrell says.

When Central United Methodist in Denton has a church supper, Nancy makes two of her pineapple molasses cakes, and both always disappear. She shared the recipe in the church cookbook, but members don’t dare compete with her expertise.

Futrell and his friends learned how to make molasses through trial and error. They ruined the first batch and had to throw it out. “That was a great lesson,” Futrell says. “You don’t forget lessons that involve that much work.”

More than 20 years after that failed batch, Futrell intimately knows every step of the process. He explains that his favorite variety of sorghum cane to plant is KY08. He and his right-hand man, Randall Berrier, plant the 90-day cane in May, and it’s ready for harvest by August. He recounts the dismal yield they had a few years ago due to an infestation of cane aphids, and the expensive, labor-intensive process they now follow to eliminate the pests. 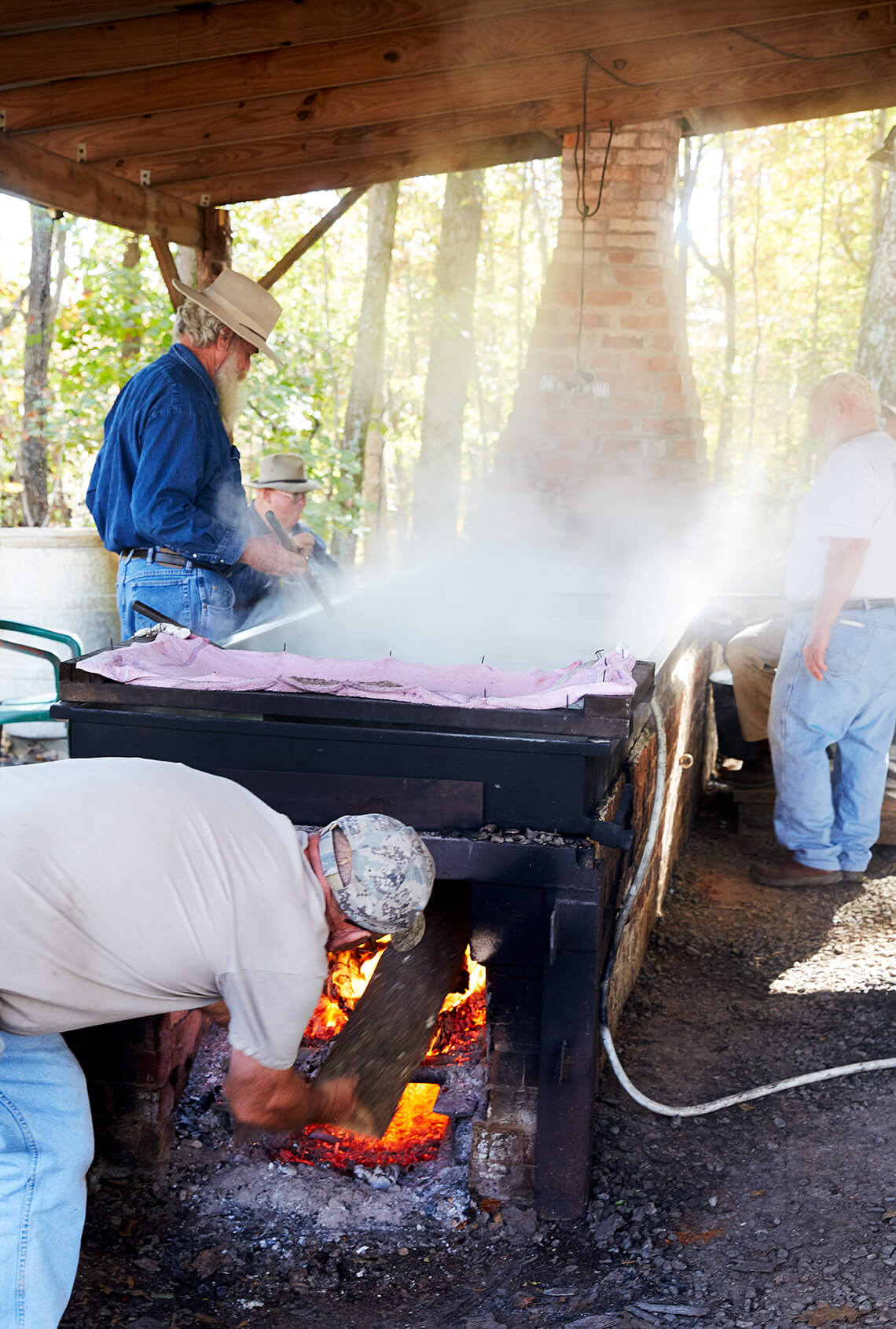 Heated by a wood-burning fire, the sorghum juice advances through a divided baffle pan. photograph by Stacey Van Berkel

As the juice cooks, Futrell cautions a friend about a hot spot in the pan’s corner that’s prone to scorching if the juice gets too shallow. He chides the fireman for not keeping the flame hot enough. If things get quiet, he breaks out into an old-time story-song about a preacher who loves fried chicken. When the juice gets thick toward the end of the pan, Futrell opens a spout beside his chair, letting out some of the syrup into a spoon. He knows it’s ready even before adding a drop to the lens of a refractometer to measure the Brix.

“He’s done it long enough, you can about throw that thing away and let him look at it,” Berrier says.

Once the molasses is ready, which takes about two and a half hours, the crew can produce approximately seven gallons an hour. Molasses flows from the table, through the spout beside Futrell, and into a bucket. When the bucket is full, someone takes the chocolate-brown syrup to cool in a vat before it’s poured into Ball Mason jars.

As noon approaches, the smell of cheeseburgers wafts from a grill and mingles with the caramel-tinged aroma of hot sugar. Futrell’s insurance agent loves to watch the cooking process, so he’s preparing lunch in return for the experience. A few men take a break from stirring and skimming to make their plates. Before they begin eating, Berrier gets the group’s attention for a prayer. It’s a simple thank-you for blessings too often taken for granted: beautiful weather, good friends, and sweet molasses.