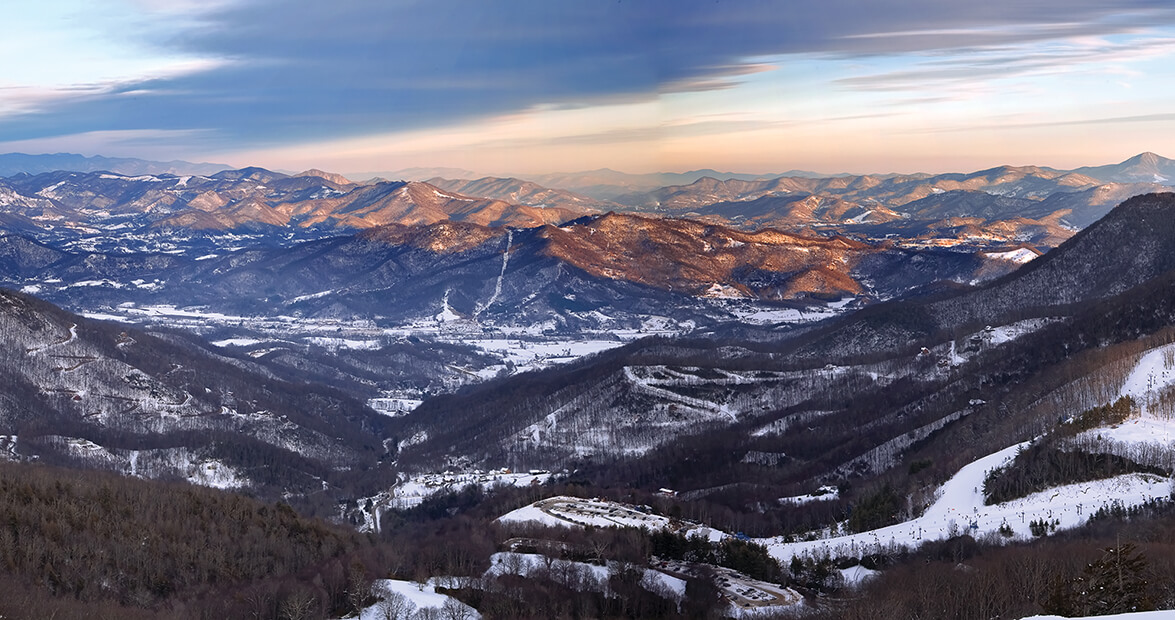 At the end of the Omigosh chairlift, up at 5,400 feet, at the tip-top of the Cataloochee Ski Area, there’s a steel gate in a barbed-wire fence. After a decent snow, an employee will unlock it, and skiers can turn left off of the regular slope and glide into what workers call The Meadow. It’s a wide-open horse and cow pasture that runs down the hillside toward the small cabins, barns, and lodges at the Cataloochee Ranch. The Meadow hugs the slope, turning back toward the other runs, and skiers and snowboarders eventually make their way down to the bottom of another lift.

The Meadow is a glimpse into what skiing was like generations ago, when there were no chairlifts, resorts, or rentals in North Carolina, when the sport was an improvised activity, attempted by people who had made their own skis and, in some cases, used golf clubs as poles. It’s also a reminder that North Carolina skiers can’t depend on nature. The Meadow has no snowmaking equipment on it, and it only opens in the brief window between a decent snowfall and thawing temperatures. Sometimes the gate is unlocked 15 times during the winter months. Sometimes it’s only unlocked twice. The lesson is clear: Without snowmaking, ski resorts in North Carolina would not exist.

From the top of The Meadow, you can see down into the valley, toward the opposite hillside, where the Cataloochee Ski Area originally opened in 1961. The slope there was small, only dropping 150 feet from top to bottom, and served by a single towrope. Tom and Judy Alexander got the idea for a ski resort here back in 1938. Tom took a picture of a mountainside with a little Kodak camera, blew up the print, and put it on the wall inside their rustic, log-and-stone lodge at Cataloochee. He wrote on it with a marker: Plott Balsams. Ranch house to be. Potato patch. And, at the bottom, pointing up to a wide, clear slope: Ski run. 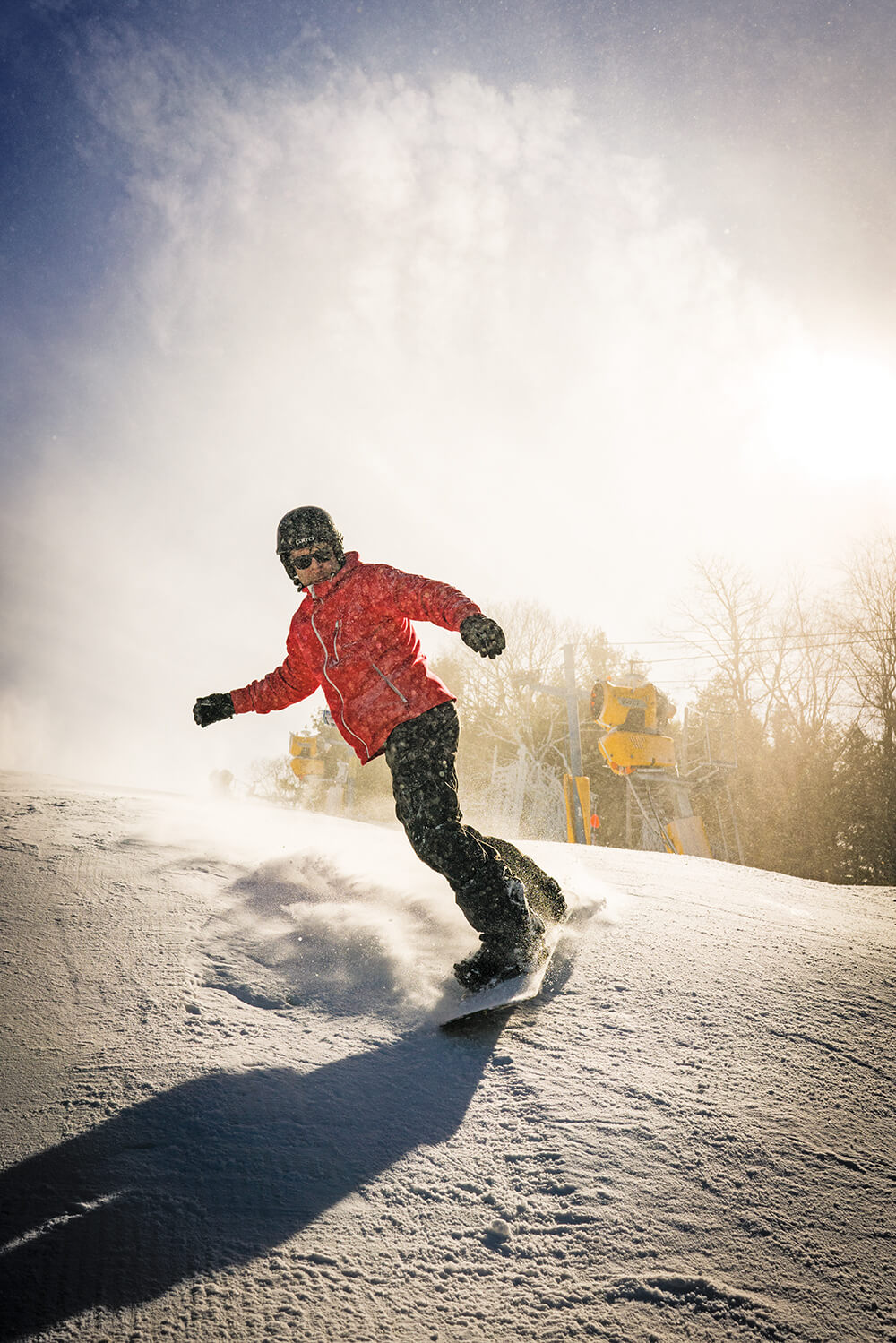 Snowboarders like Justin Keefe get a jump on the slopes thanks to man-made snow on Cataloochee’s Upper Omigosh run. photograph by Derek Diluzio

Almost everything in that picture came to be, albeit 23 years later. It wasn’t until 1961 that snowmaking equipment had progressed to the point that Tom and Judy decided to give their idea a go. Their two daughters had returned to the area and pledged to help. The whole point, Tom used to say, was to give his workers at Cataloochee Ranch something to do during the winter. On December 10, the first snowmakers turned on, and Cataloochee became North Carolina’s first ski area. A horse barn became the lodge. People took to it, says Judy Coker, Tom’s daughter, who ran the rental shop. “Ski all day,” she says. “Party all night.”

At the end of the 1960s, Cataloochee moved to its current spot, on the northern slope of an adjacent mountain, and the Alexanders started adding more snowmakers, lifts, and parking. The original lodge turned back into a barn. By that time, five more ski areas had opened in the state, including runs at Beech and Sugar mountains. Those areas were opened by an Alabama dentist named Tom Brigham, later nicknamed the “Father of Southern Skiing.” Unlike the Alexanders, Brigham and other resort owners first viewed skiing as a way to get people to buy mountain real estate, and in the 1970s, when the economy stalled and gas shortages began, nearly all of North Carolina’s ski areas fell on hard times. Some went bankrupt or closed. When they reopened with new managers, many of them invested in the skiing side of things. Gunther Jochl, who grew up skiing in the Austrian Alps, took over Sugar Mountain in 1976 and bought it in 1978. He added more snowmakers and started grooming the slopes. Injuries went down. Business went up. “Skiing is not a cheap thing, and you can’t use it as a marketing tool,” Jochl says.

Steadily, North Carolina fostered a ski culture that’s different from other places. For one, hardly anybody comes here from points north. Instead, the southern Appalachians are the first place people from throughout the Southeast go to find fresh powder. And if snow hasn’t fallen here, it’s been made.

North Carolina makes more than snow. “We’re a skier factory,” Jochl says, laughing. “We teach a tremendous amount of lessons.” Ski rentals are a must for many. And some facilities even rent ski clothing. The lodges are more utilitarian than extravagant — wood-paneled and carpeted affairs that allow chilly skiers to warm up or grab a cafeteria-style meal. “The amenities are nice, but not primary,” says Michael Berry, president of the National Ski Areas Association. “What [Southerners] are looking for is the snow and the skiing.” 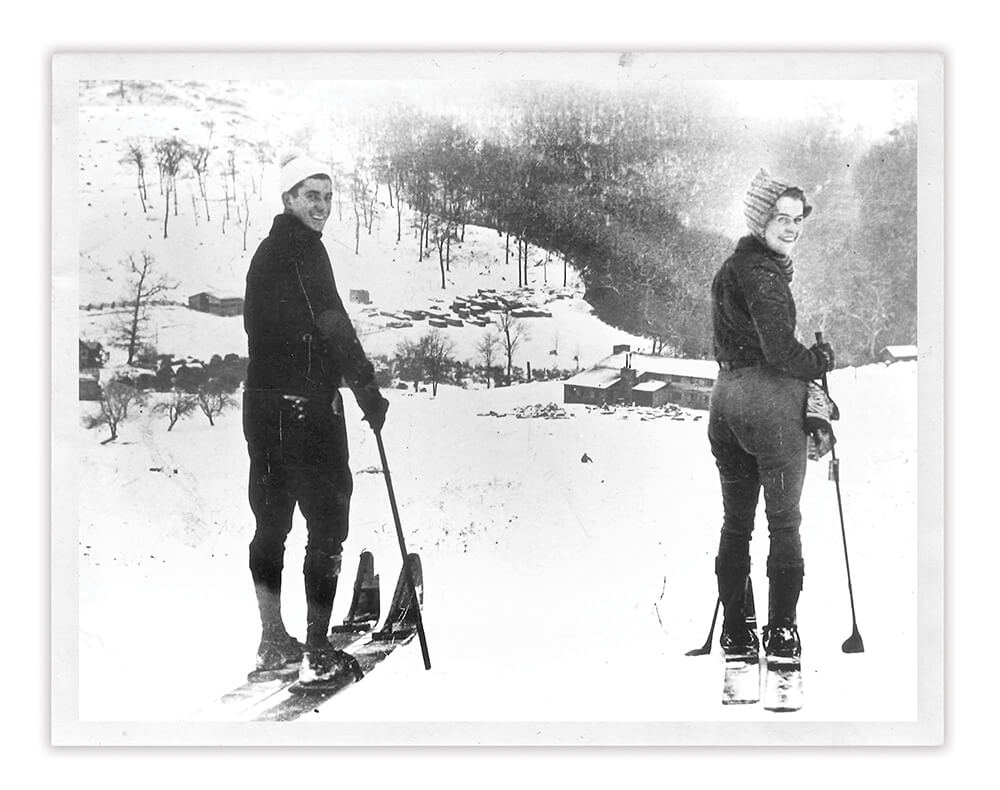 Here’s a secret about artificially made snow: It’s not all that different from natural snow. Man-made snow tends to stick to a slope a little better, but once it’s been groomed, most skiers can’t tell the difference.

Snowmakers make skiing in North Carolina possible, and for Chris Bates, there’s nothing like turning on the machines for the first time each season. “I love it,” he says. “I can’t sleep.” Bates is the general manager at Cataloochee, and he keeps a weather readout on the desk in his office above the lodge. Fifteen degrees is the perfect temperature for making snow, he says. A little warmer, and the process is less efficient. A little colder, and the lines tend to freeze. But anytime the temperature drops below freezing, Bates pushes a few buttons on a computer, and the snowmakers hiss to life. Within 12 hours, they can make enough snow to open a bare slope to skiers.

In North Carolina, there can never be enough snow. A resort in a more naturally cold area might be happy with three feet of packed snow on the slopes. Bates would rather have 10. Just in case. He’s installed storm drains underneath the slopes to catch the snowmelt. For one thing, this catches the running water that speeds up the melting. For another, if he catches that water, he can use it to make more snow. The whole process is efficient. Machines that once blew out hundreds of gallons of snow an hour now create thousands. It’s an expensive, power-hungry process. Sugar Mountain, for example, pays about $1.8 million to keep its slopes covered each season.

Still, when the slopes are white, people will come, even on short notice. “If we made snow tonight,” Bates says, looking down from the top of the mile-high mountain, “500 or 600 people would be here skiing tomorrow. From all over.” There’s this pent-up passion that builds after skiing season ends in March, he says, one that makes skiing in North Carolina like no other place. Bates learned that when he first arrived in 1999 from a ski area in the Northeast. The slopes were snow-covered on his first day at Cataloochee, but the weather was 40 degrees and drizzly. When he walked in the door at 7 a.m., Bates expected business to be slow. No, no, said his boss, just watch. By 8 a.m., the chairlift lines were long, and the slopes were full.

“That,” Bates says, “is the resilience of the Southern skier.”