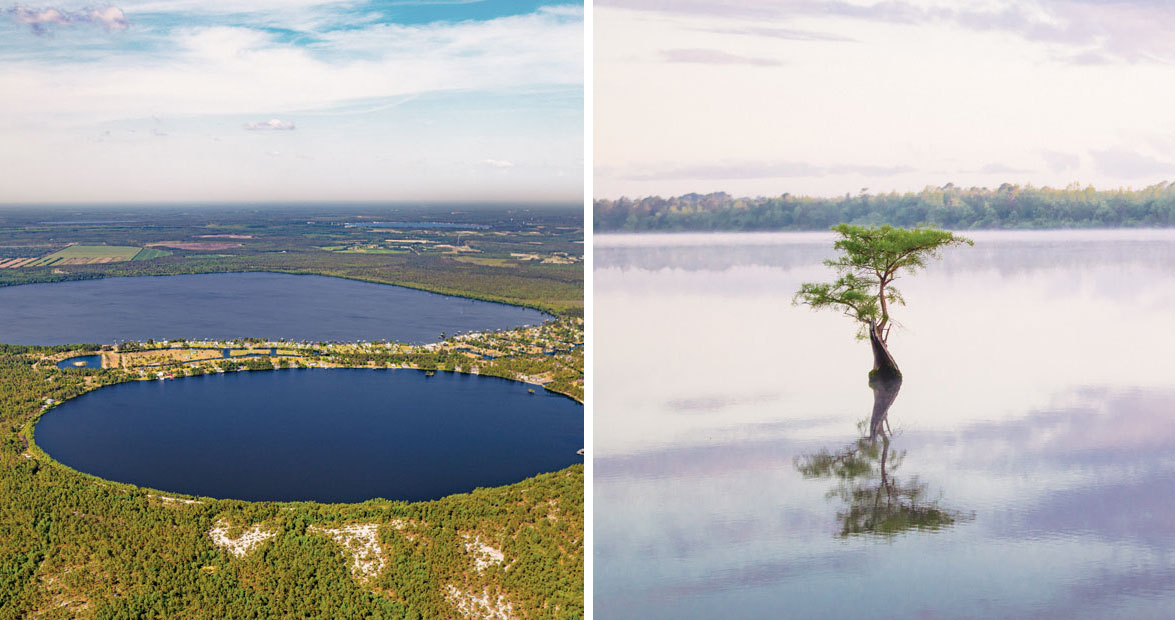 This lake is no ordinary lake. This lake — its perfectly rounded edges hugged by a rim of sand — is a Carolina bay, one of thousands in the southeastern corner of our state. Most bays are now boggy or dry, having been crowded with vegetation or drained for farmland. But a few are home to beloved bodies of water: Singletary, Jones, Waccamaw, White. People lived alongside the bays for millennia before the 1930s, when aerial photography brought their true nature into focus. From Delaware to Georgia, hundreds of thousands of depressions pock the landscape, each with the same elliptical shape. In the Carolinas, where the bays are most plentiful, they also share a northwest-to-southeast orientation.

Their origin stories are many — Sinkholes? Spawning fish? Thousands of meteorites crashing to earth? — but most scientists agree that only one theory holds water: As glaciers waxed and waned in regions north of us, water-filled depressions on our southeastern Coastal Plain expanded and contracted. Wind patterns created waves, forming sand deposits around the water’s edge. And slowly, the bays began to take shape. 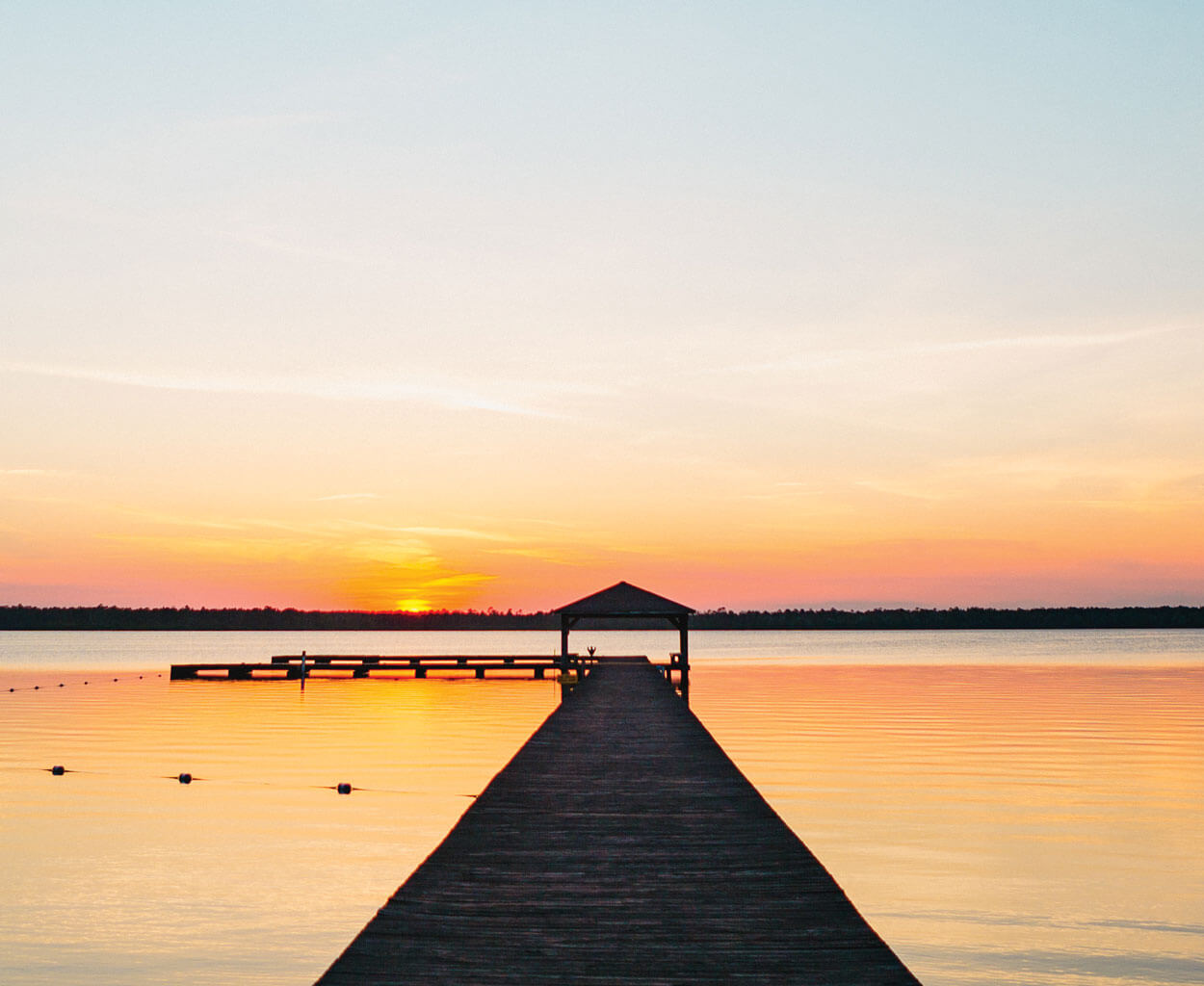 At nearly 9,000 acres, North Carolina’s largest bay lake is the crown jewel of the Columbus County town that shares its name. People have always been drawn to Lake Waccamaw’s peaceful waters and the longleaf pine forest along its shores. Long before modern-day arguments over the origin of the bays, Native Americans living near the lake explained its broad expanse with a story: A meteor appeared in the night sky, they said, then hurtled to earth, leaving a crater that filled with water from nearby creeks. To this day, Waccamaw Siouans call themselves “People of the Falling Star.” 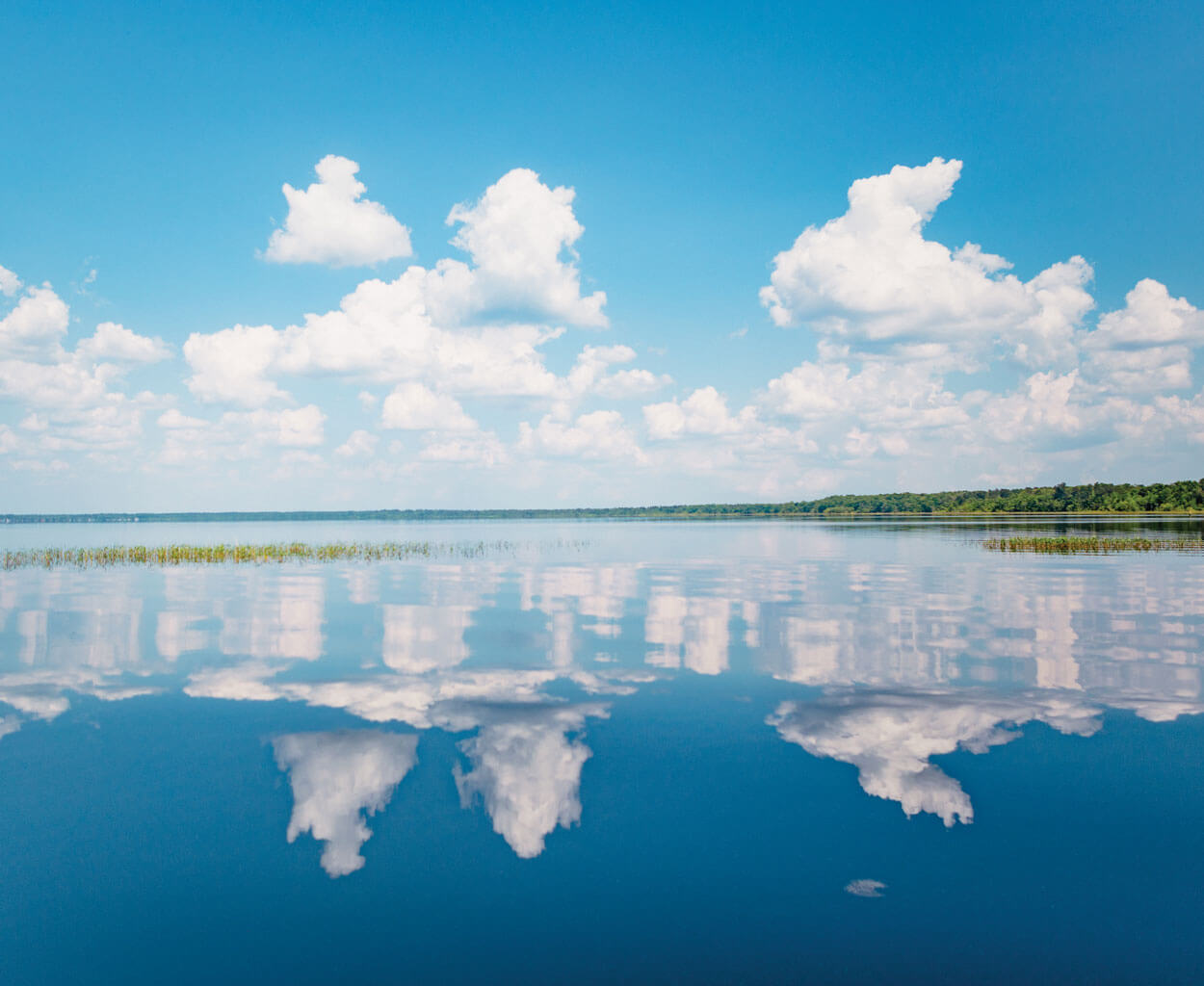 Like other Carolina bays, Lake Waccamaw is lined with peat — or partially decayed vegetation — which releases tannins, darkening the water to the color of sweet tea. But Waccamaw is also unique: A series of limestone bluffs on its north shore neutralize the tannic acid, creating welcoming waters for an array of aquatic life, including several endemic fish, snails, and mussels. One prehistoric resident holds a place of honor in the visitors center at Lake Waccamaw State Park: the fossilized skull of a baleen whale, discovered by a neighbor who, for years, tripped over its jawbone, mistaking it for a cypress log. 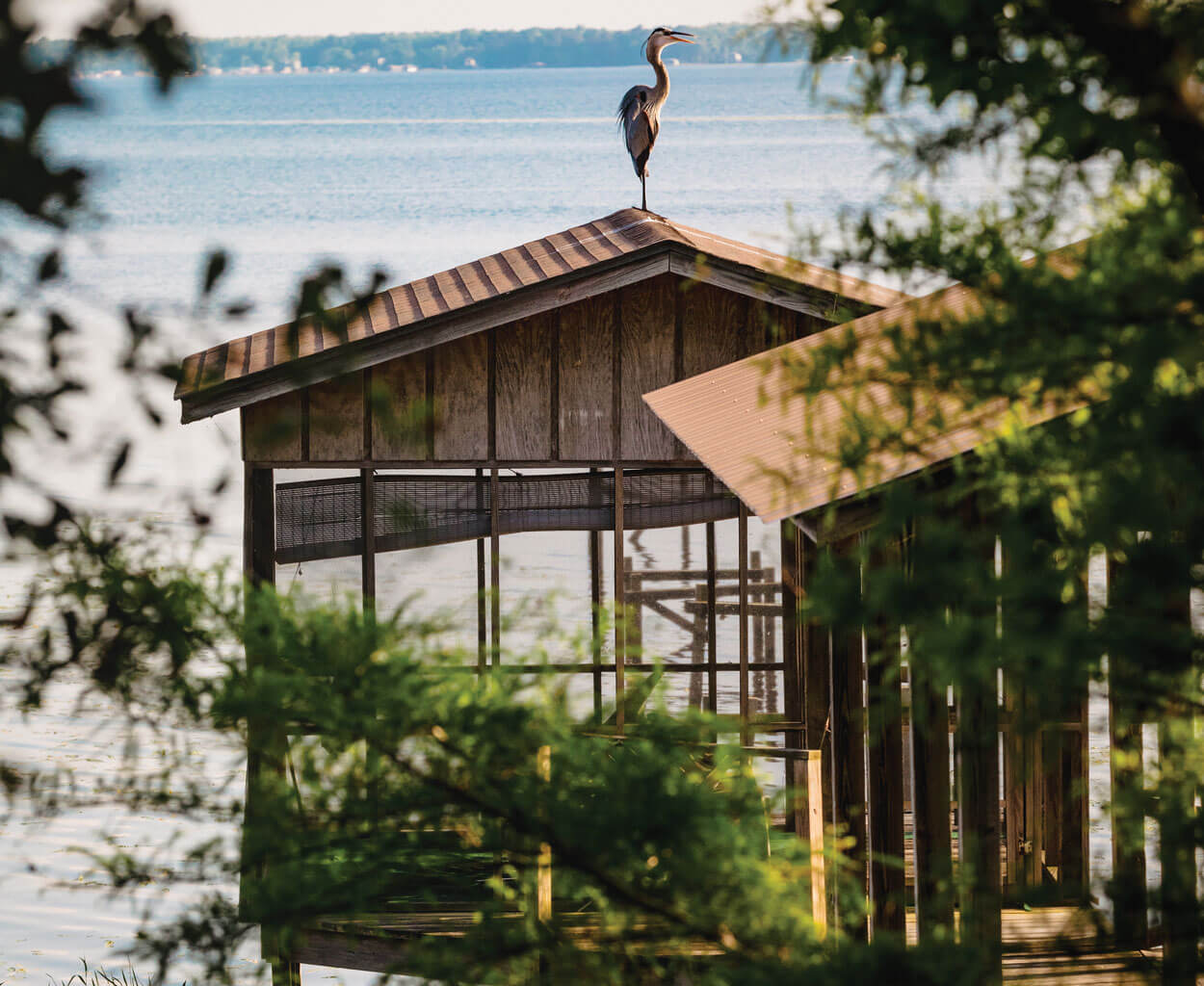 Evidence suggests that most bays once held water, even if they don’t today. Many bay lakes have been drained for agricultural purposes. But there’s a natural process at work, too: Cypress knees trap floating vegetation, forming little islands. As plant life invades, the space between the islands and the shoreline slowly dwindles. The lakes are shrinking on a geologic timescale — well beyond the scope of our lifetime — but in Bladen County, Suggs Mill Pond offers a peek at this ancient process in action. Only about 9 percent of the water there remains, and the shape created by the encroaching plants has earned it another, entirely fitting name: Horseshoe Lake. 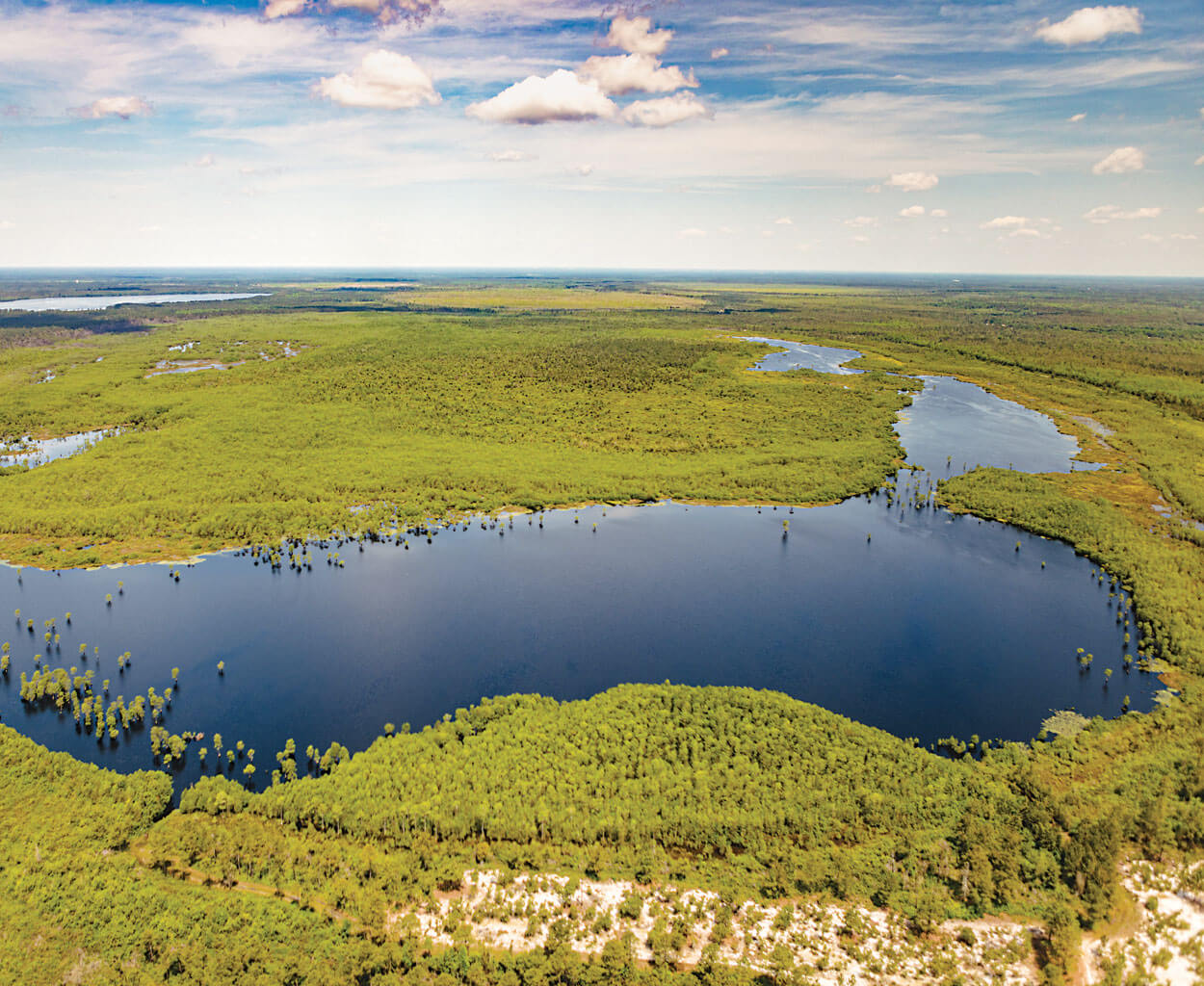 Horseshoe Lake is a stopover for ducks and other migratory wildfowl on the Atlantic Flyway, making Suggs Mill Pond Game Land a popular spot for birders. But non-hunters have plenty to marvel at, too. A paddle around the lake in a kayak or canoe offers an up-close-and-personal look at cypress knees, lily pads, and pitcher plants, which can grow in floating mats up to two feet thick. 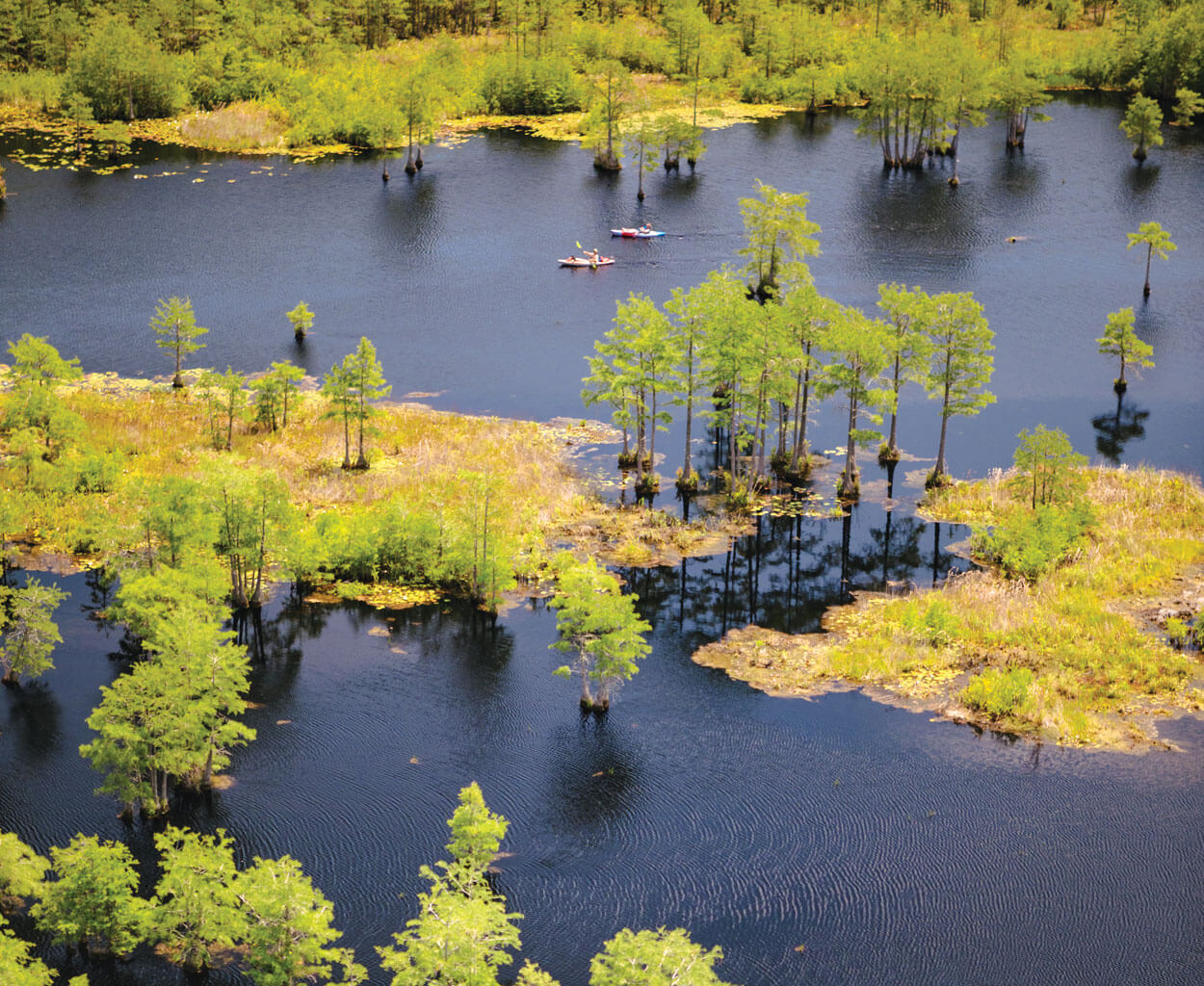 A paddle around Horseshoe Lake offers an up-close-and-personal look at its wonder. photograph by Baxter Miller & Ryan Stancil

Kyle Peterson and DJ Kemp are in on a treasured local secret: On warm days after school, the two hop on their bikes and ride north from Elizabethtown to go swimming at Jones Lake State Park. Long ago, the longleaf forest around Jones Lake and neighboring Salters Lake was used in the production of naval stores. That practice ended in the early 1900s, but evidence of the past remains: tar mounds, charcoal, and pines with “catface” scars, where the trees were cut to release resin. In 1939, the state park opened as North Carolina’s first for African-Americans. Since then, generations of families have held annual reunions at Jones Lake, and rangers make sure that those longtime visitors find familiar favorites. A seasonal concession stand, horseshoe pits, and a swimming area with a sandy beach all help make new memories. 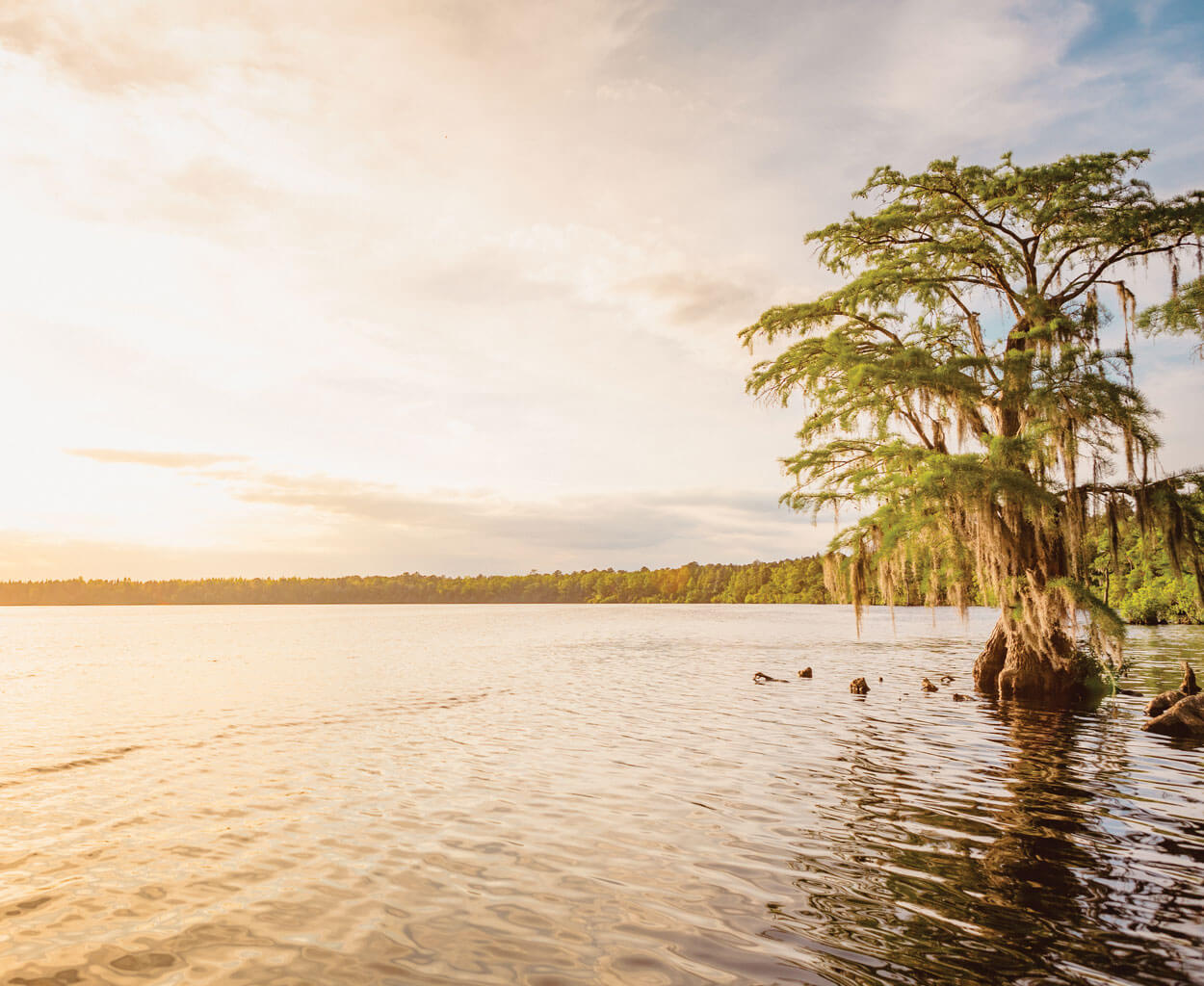 Hoke County hosts a rarity, even among the mysterious Carolina bays: a cypress savanna, rooted in clay-based soil. Antioch Church Bay’s ecosystem thrives on a seasonal cycle of flooding. During winter and spring, the clay basin collects rain, causing shallow waters to rise up around the bases of pond cypress and pine trees. The habitat is ideal for certain rare plants and animals, especially amphibians like Mabee’s salamander. The Nature Conservancy oversees this land and keeps it closed to the public, meaning that Antioch Church Bay is free to remain wonderfully wild. 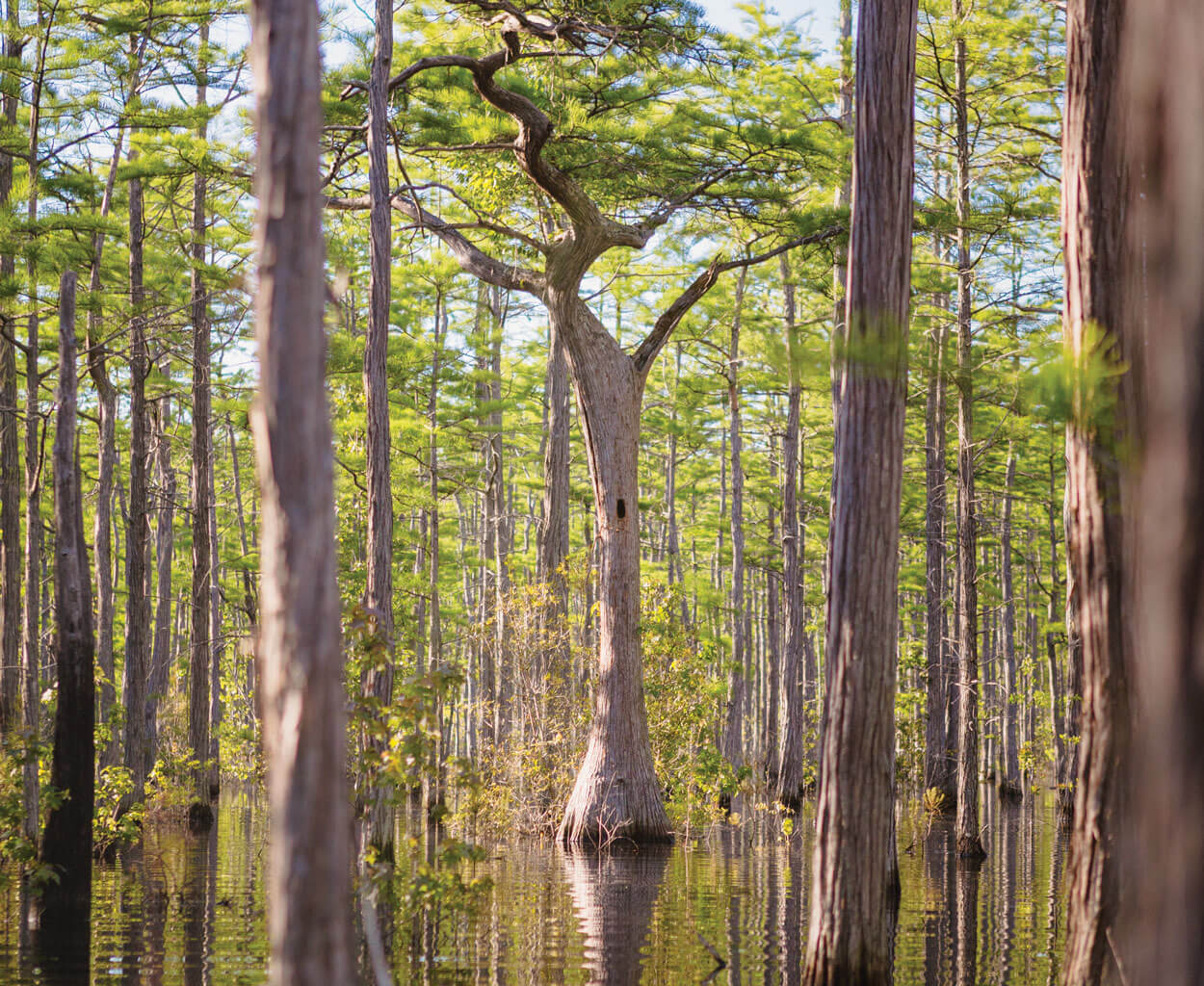 The clearest of North Carolina’s bay lakes is spring-fed, with water bubbling up from far below. Around the turn of the 20th century, White Lake’s sparkling surface and white-sand bottom caught the eye of a local, Ralph Preston Melvin. His father owned 800 acres on the lake, mostly farmland, but Melvin saw the potential for more. In 1901, he opened the first public beach property, with a dance floor, hotel, and two bathhouses. From there, White Lake’s transformation into a summer resort was swift: Beach music and boardwalk-style amusements. Boating and swimming. Water-skiing and wakeboarding. For many residents of Bladen County, it’s a taste of the beach, close to home. 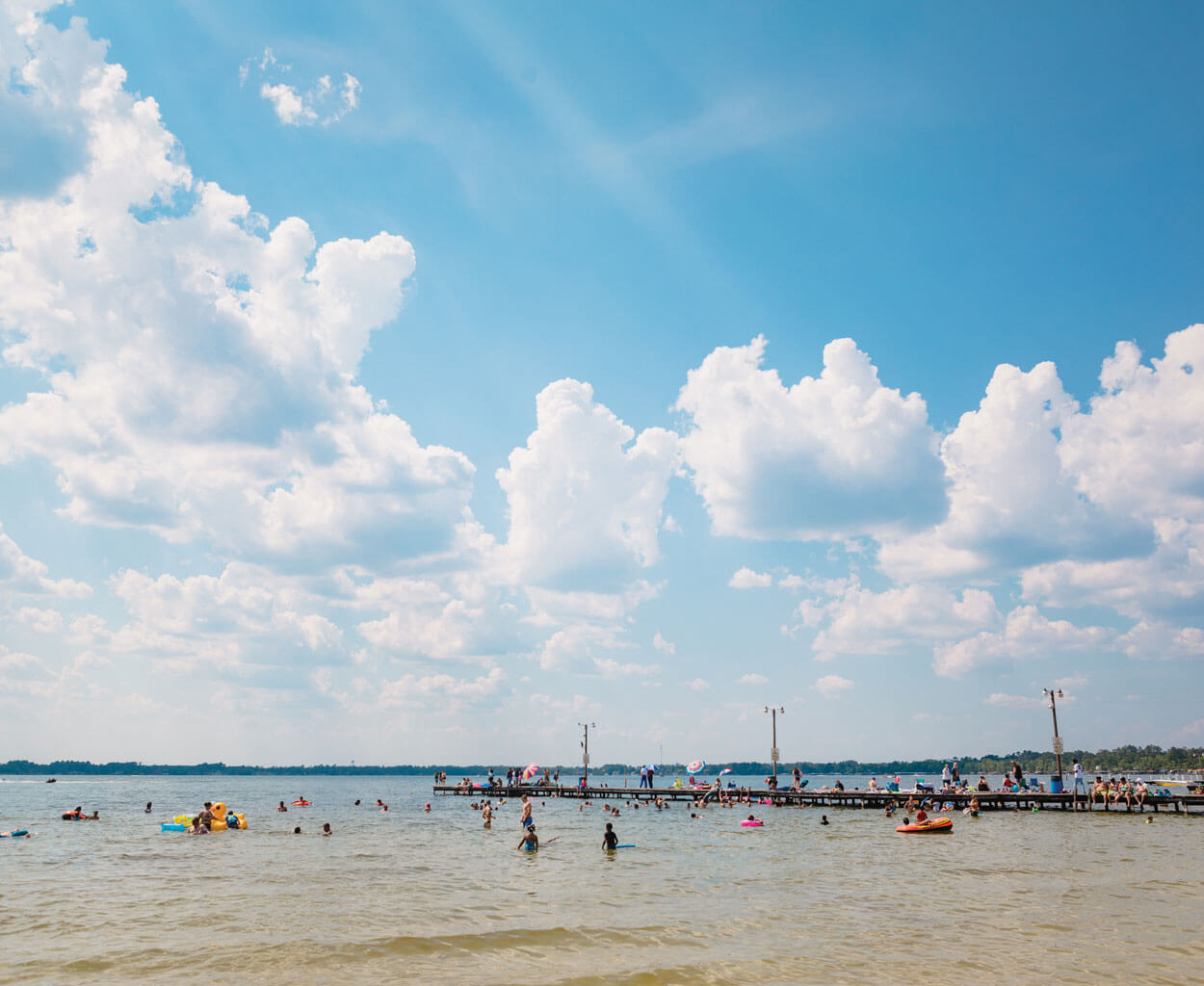 Like other bays-turned-state parks, Singletary Lake offers an opportunity to interact with a mystery. But the truth is, when you cross the sand rim into this Carolina bay, studded with cypress knees and swathed in Spanish moss, it’s easy to forget the bird’s-eye view. Rent a canoe, hike a trail, cast a line: You’re not lost in a mystery; you’re reveling in the magic of nature. 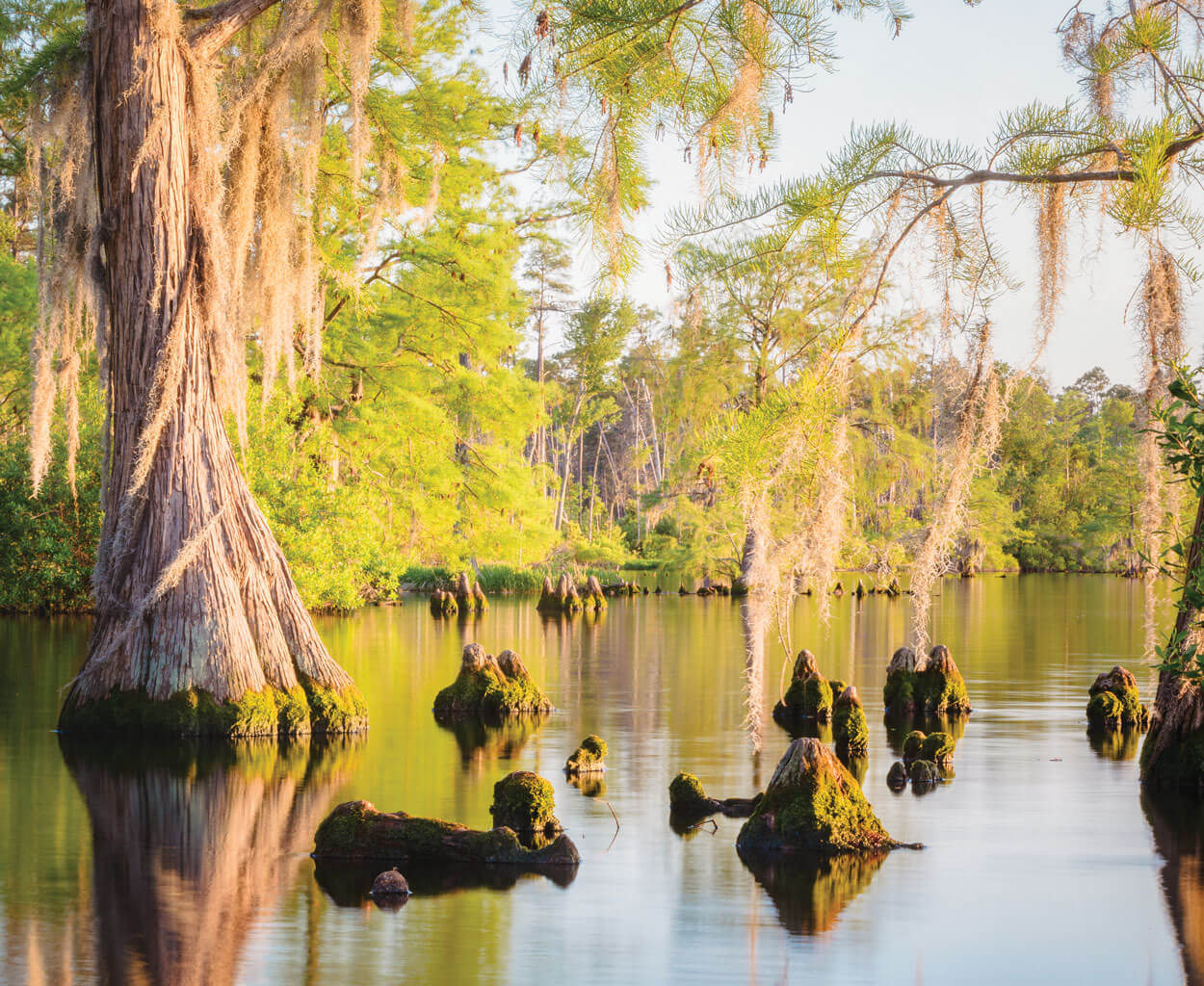