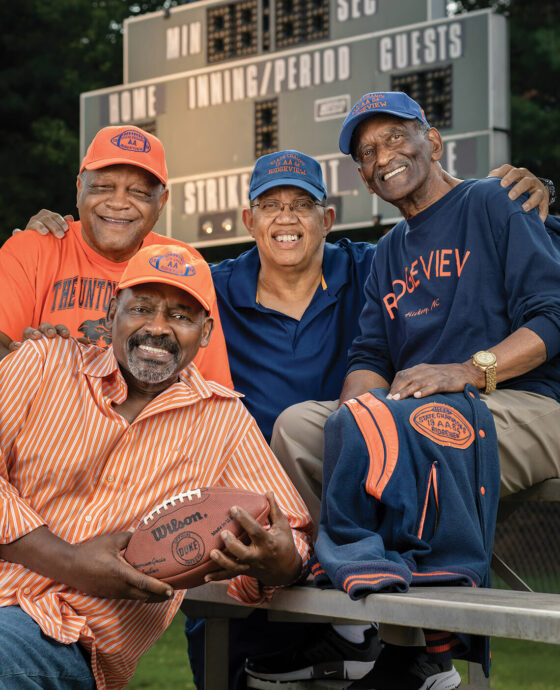 It takes a certain set of eyes to look at the quiet field a few blocks south of downtown Hickory and see what was once the most electric spot in the city. When Xenophone Lutz visits today, he can still visualize it: In the early 1960s, when Ridgeview High School’s football team played here, cars jammed the now-sleepy neighborhood streets, and fans filled the long-gone bleachers. For Lutz, a former Ridgeview Panther, the echoes of cleats crunching on asphalt linger. That was the sound of the Panthers heading into a game, ready to plow into their opponents. “We knew that sound would bring fear into their hearts,” Lutz says.

Nearby, a commemorative brick-and-metal archway reminds those who come to the field today that this was once home to Ridgeview’s powerhouse football team — a squad that, for one brief season, became a true-life tall tale. Between 1957 and 1965, Ridgeview High School, which served Hickory’s Black students during segregation, won a state-record 74 consecutive regular-season games. In 1964, the Panthers attained perfection, going undefeated and winning the Class AA title from the North Carolina High School Athletic Conference, the sanctioning body for Black schools. Along the way, the team, dubbed the “Untouchables” by a local sportswriter, outscored their opponents 446-0 in 12 games. With two more shutouts to start the 1965 season, the Panthers held foes scoreless for 14 straight games, still a state record. 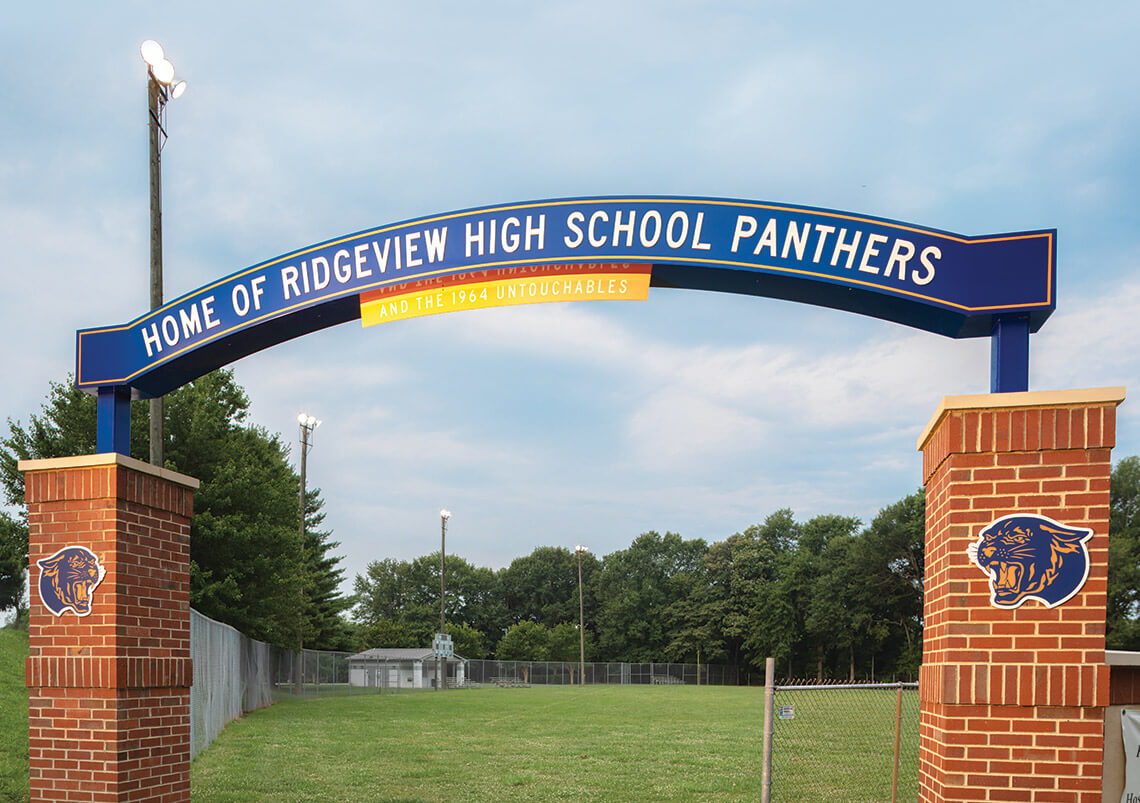 Lutz, who today serves as senior pastor at Newton’s Gethsemane Missionary Baptist Church, likes to dazzle folks with stories about his old team’s successes. “When I tell people how nobody scored a touchdown on us my senior year, they don’t believe me,” he says. “But it’s all true.”

For those who lived it, the 1964 fall season felt almost magical as excitement over Ridgeview’s dominance crossed racial lines. But less than two years later, the Untouchables’ school was gone. When integration brought together the city’s Black and white students in the same classrooms, Ridgeview High School closed, making the Untouchables’ story not just about lifelong bonds and championship glory, but also about what can get lost on the journey toward progress. As Hickory continues to find new ways to celebrate the legacy of the team and its school, the story remains unfinished.

For one weekend every other September, Ridgeview alums fill the former school’s old gymnasium with folding chairs, long tables, and laughter. At these regular reunions, erstwhile students share photos of grandkids, decades-old jokes, and happy stories of their high school days. And at Ridgeview, there was no bigger story than the Untouchables.

The 1964 team boasted 34 members, and, more than half a century since their last game, keeping in touch has been challenging. According to some estimates, only about 15 former players are still alive, with maybe 10 still living in the Hickory area. Among those are Lutz, a hard-hitting linebacker and offensive guard; Tillis E. Rendleman Jr., who manhandled foes as a linebacker and offensive tackle; Lee Douglas “Doug” Bumgarner, an elusive running back who scored 21 touchdowns in 1964; and Hampton Davis, a linebacker and an explosive kick returner who earned the nickname “Rabbit.” 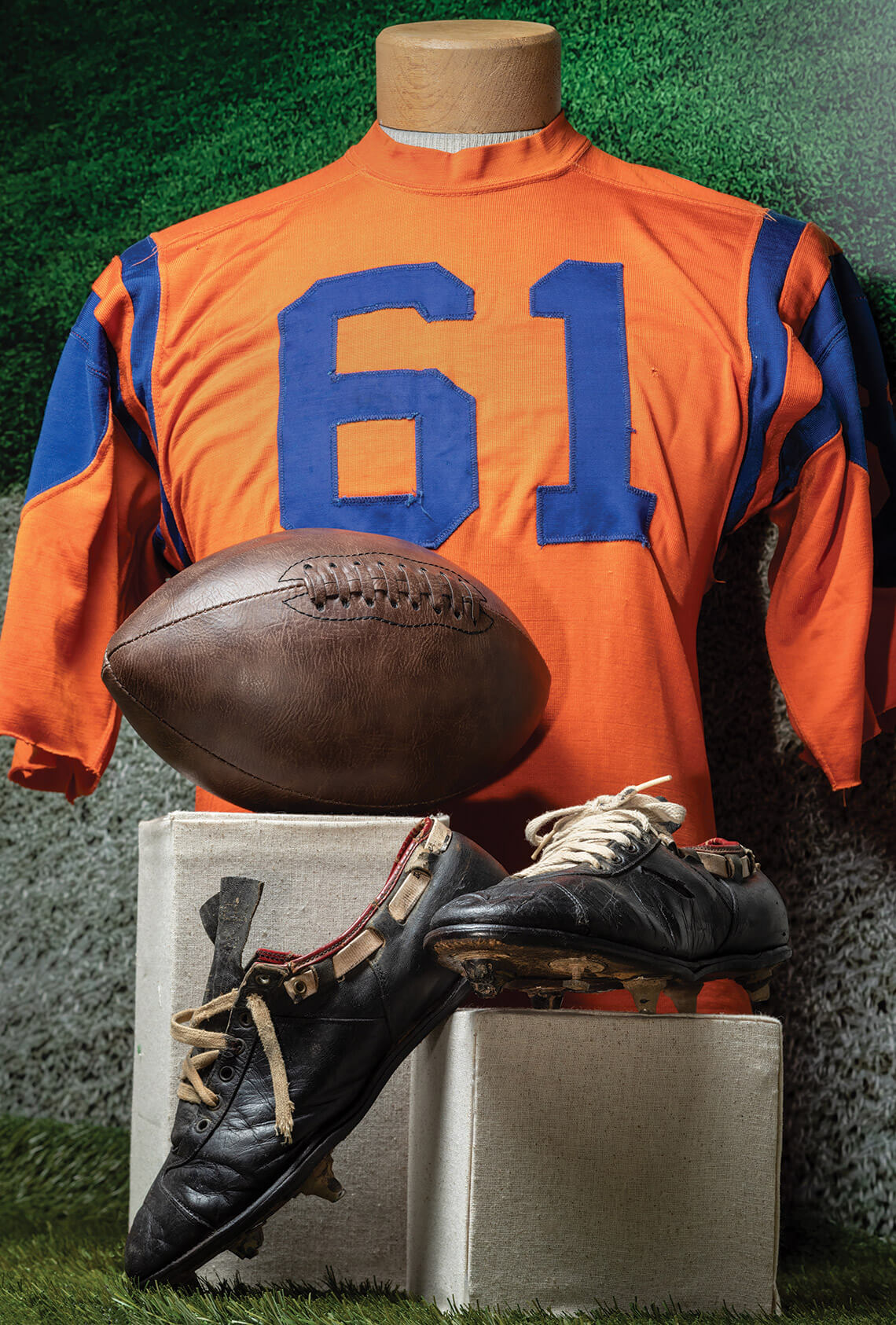 Old “Untouchables” jerseys, footballs, and cleats are among the memorabilia that’s been collected and preserved at the Catawba County Museum of History. photograph by Jerry Wolford & Scott Muthersbaugh

For these guys, life moved quickly after leaving Ridgeview. Lutz briefly played college and semipro football, then spent three decades working for General Electric before becoming a pastor. Rendleman had a long career in nursing after serving in the Army’s Medical Corps, and Bumgarner followed a stint in the Army with nearly four decades spent working in information technology. Davis joined the Marines and saw significant action in Vietnam before returning to Hickory and working for GE and then a chemical company.

Now retired and in their 70s, Lutz, Rendleman, Bumgarner, and Davis — known by their grandchildren as Grandpa, PaPa, Grandaddy, and PawPaw — are Hickory’s most active keepers of the Untouchables’ legacy. And when they gather at Ridgeview reunions, the stories of their perfect season flow. They bring up the brutal summer workouts that forged their ability to push deep into games, and the childhood football experiences that cemented their friendships. They recall their ancient team bus, nicknamed “The Wreck”; their nearly grassless home field that everybody called “The Dust Bowl”; and the brilliant coaches who had a solution for everything their foes tried.

They tell stories about how, as the perfect season progressed, fans both Black and white rallied around them. Rendleman remembers strangers approaching him on Saturdays at the Winn-Dixie where he worked a part-time job: “One man, I don’t recall his name — maybe I didn’t even know his name — said, ‘You did a good job last night, I’m proud of you. But you guys need to get down on that ball faster. Don’t give them a chance!’” 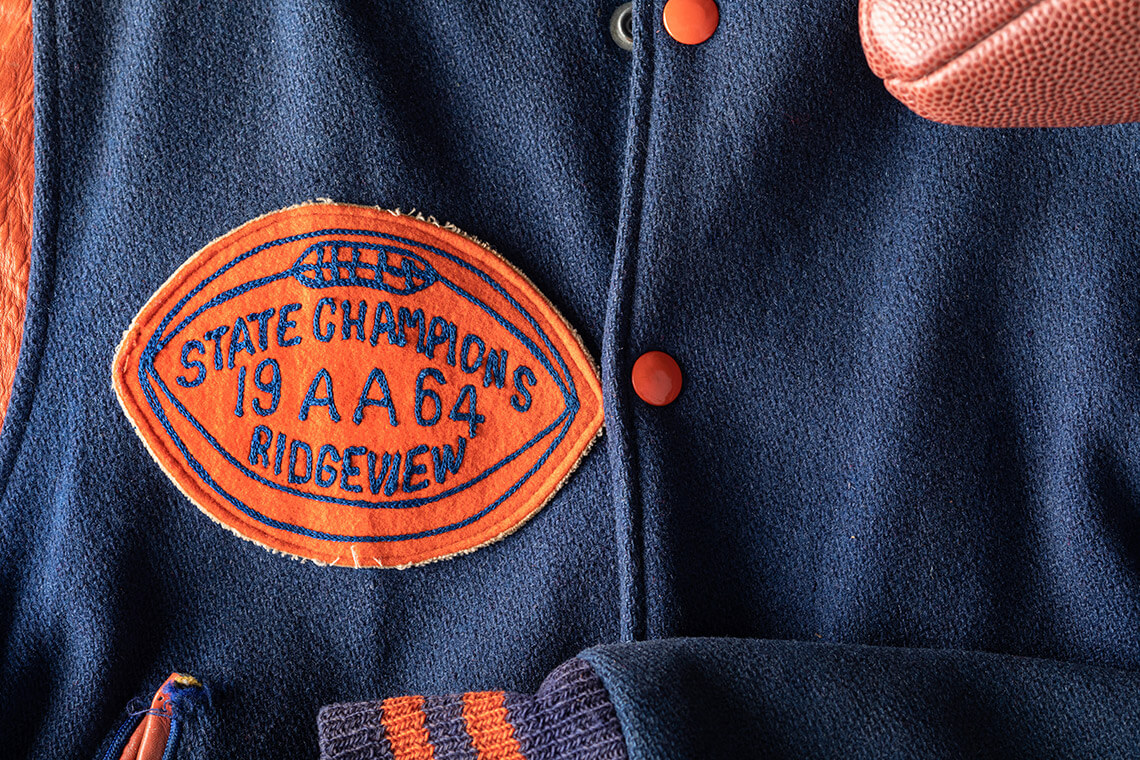 Few items of clothing expressed the pride of Hickory as effectively as a letter jacket from Ridgeview High School’s “Untouchables.” photograph by Jerry Wolford & Scott Muthersbaugh

The season’s climax came in the state championship game against Hamlet’s Monroe Avenue High School. The Panthers stopped a Hamlet drive one yard shy of the end zone just before halftime and scored two second-half touchdowns in the 16-0 victory that sealed their perfect legacy. “I looked at it as God giving us something that we can cherish and carry on through our lives,” Bumgarner says of the ’64 season. “With what happened to our school, He said, I’m going to give you all something great.”

For Hickory’s Black community, Ridgeview was a generational touchstone. Bumgarner remembers walking to the field before games and passing former Panthers who offered both compliments and critiques, as well as neighborhood kids asking to carry the helmets of their heroes. “They were dreaming the dreams that we dreamed when we were their size,” Bumgarner says.

But those dreams would have to be realized somewhere else. In 1966, as Hickory began the bumpy road toward integration, Ridgeview High closed. With a history dating back to 1926 and faculty members with degrees from schools like Cornell, Columbia, and NC A&T, Ridgeview was a source of pride for Hickory’s Black residents. And in a city where water fountains and movie theaters were still not open to these students, Ridgeview was theirs. If integration meant a more equitable future, it also left a common thread severed. “The Ridgeview community was like a family,” Davis says. “When everyone started going to school somewhere else, it just wasn’t the same.”

Adele James McCarty lives a few miles south of Ridgeview, and, for the time being, her spare bedroom contains as much Panthers spirit as anyplace in town. On one wall, a 9-by-5-foot mural tells the school’s story with scenes showing Ridgeview cheerleaders and glee club members. On the opposite wall, another mural celebrates the Untouchables with a snarling panther and a re-creation of the team photo that’s one of the few remaining images of any kind from that season.

Look closely at the photo in the mural, though, and you’ll notice a few more faces than there were in the original. A handful of players were missing from the real version, so McCarty painted them in with help from yearbook photos and private collections. “Luckily, one of the players posted some old photos of himself on Facebook,” says McCarty, a Hickory native and artist who specializes in rich, colorful murals and portraits. 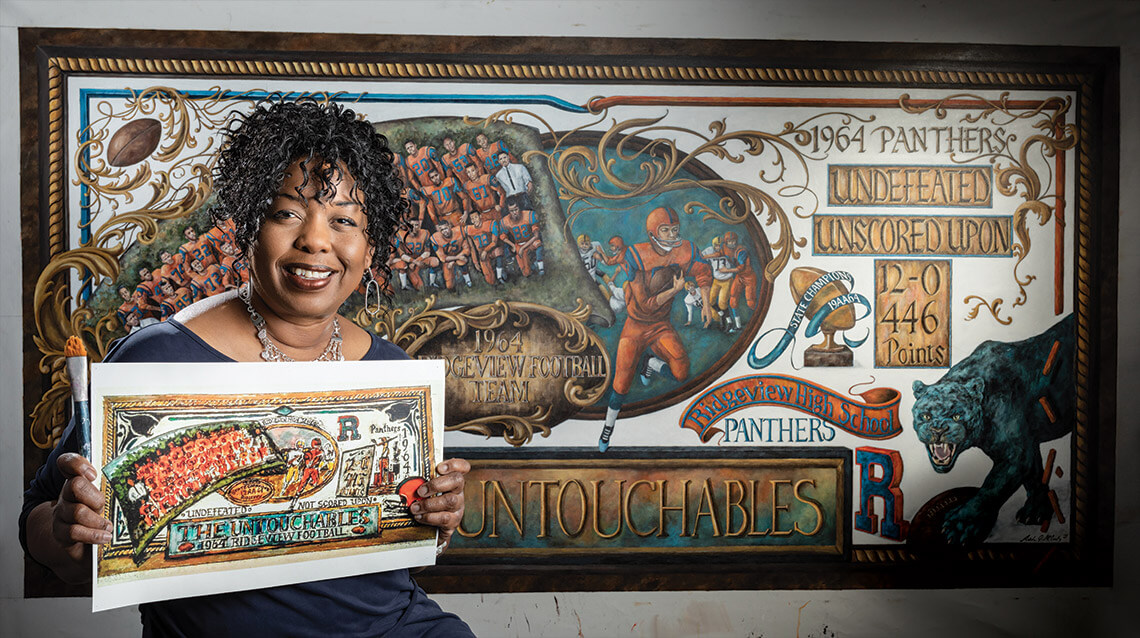 Adele James McCarty’s art adorns homes and offices across Catawba County. But in Hickory, she’s perhaps best known for her two murals that re-create the story of the 1964 Ridgeview Panthers. photograph by Jerry Wolford & Scott Muthersbaugh

When it comes to tangible reminders of the Untouchables’ legacy, not much else remains. Most of the buildings that made up Ridgeview High are gone; only the white-columned gym, now a recreation center, still stands. Several championship trophies reside at Hickory High School, and a few artifacts — jerseys, cleats, and jackets — are shared between the Catawba County Museum of History and the Ridgeview Historical Library.

McCarty’s paintings are part of a recent effort to further preserve Ridgeview’s history. Reproductions of her artwork — funded through a Z. Smith Reynolds Foundation Inclusive Public Art Grant secured by the United Arts Council of Catawba County — adorn either side of the blue-and-orange archway that now stands at the entrance of the Panthers’ old home field. Meanwhile, Richard Eller, a history professor at Catawba Valley Community College, is releasing a feature-length documentary about the 1964 Ridgeview team entitled, naturally, The Untouchables. “I think in the greater Hickory community, this story could have fallen by the wayside,” Eller says. “I just wanted to see what we could do to share it because it’s a great, great story.”

That true story — the one about a football team from a long-gone school whose athletic records still stand, the one about a group of guys who played on a dirt field but put together a spotless season — is just too fantastic to forget.