For Trey Prescott, being a high-end chef in a small town means finding a balance between expressing his own vision about food and dining, and understanding — but not underestimating — his customers. Prescott grew up in Kernersville, which means that many of the folks he serves at his casual yet elegant bistro, The Prescott Restaurant, are neighbors who know his family. 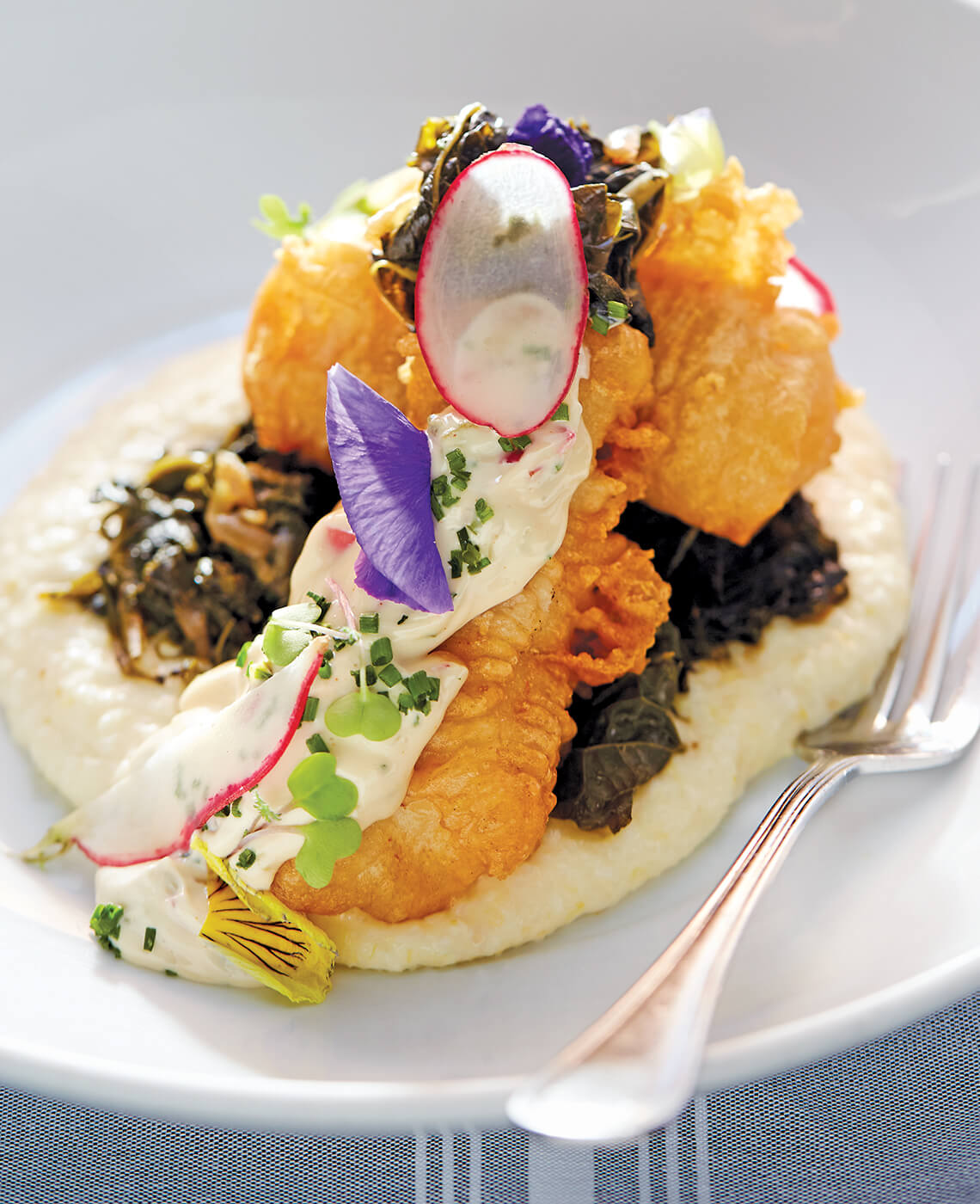 One of The Prescott’s popular dishes is triggerfish with pecan grits and locally grown collards from 5 Woods Life, an organic farm just four miles east of the restaurant. photograph by Stacy Van Berkel

In the kitchen, the 37-year-old chef merges his small-town roots with big-city flavors, using local ingredients with a continental sensibility. He began developing this style while working at Herons at The Umstead Hotel and Spa in Cary alongside one of the South’s top chefs, Scott Crawford. “I model a lot of how I am as a chef on how I worked with Scott,” Prescott says. “People were coming for an experience, and you had to work your butt off to make sure they had the best experience.”

Prescott cooked at Herons from 2011 to 2014, and his work ethic and positive attitude left an impression. “I knew that once Trey developed his own style, there would be no stopping him,” says Crawford, who now has two restaurants in Raleigh, Crawford and Son, and Jolie. “It’s heartwarming to hear that his time in my kitchen inspired him. That’s what it’s all about.”

Small towns like Kernersville can be stereotyped as places where people are only interested in diner food or pizza, but that description is far from accurate, particularly now. Located smack-dab between Winston-Salem and Greensboro, Kernersville, whose population is just over 24,000, is growing. Beginning in the early 2000s, local officials invested in the downtown area, where The Prescott is located, building a park and adding an ice-skating rink behind the Kernersville Museum. Prescott says that the goal was to offer visitors more to see and do than just tour the historic Körner’s Folly. 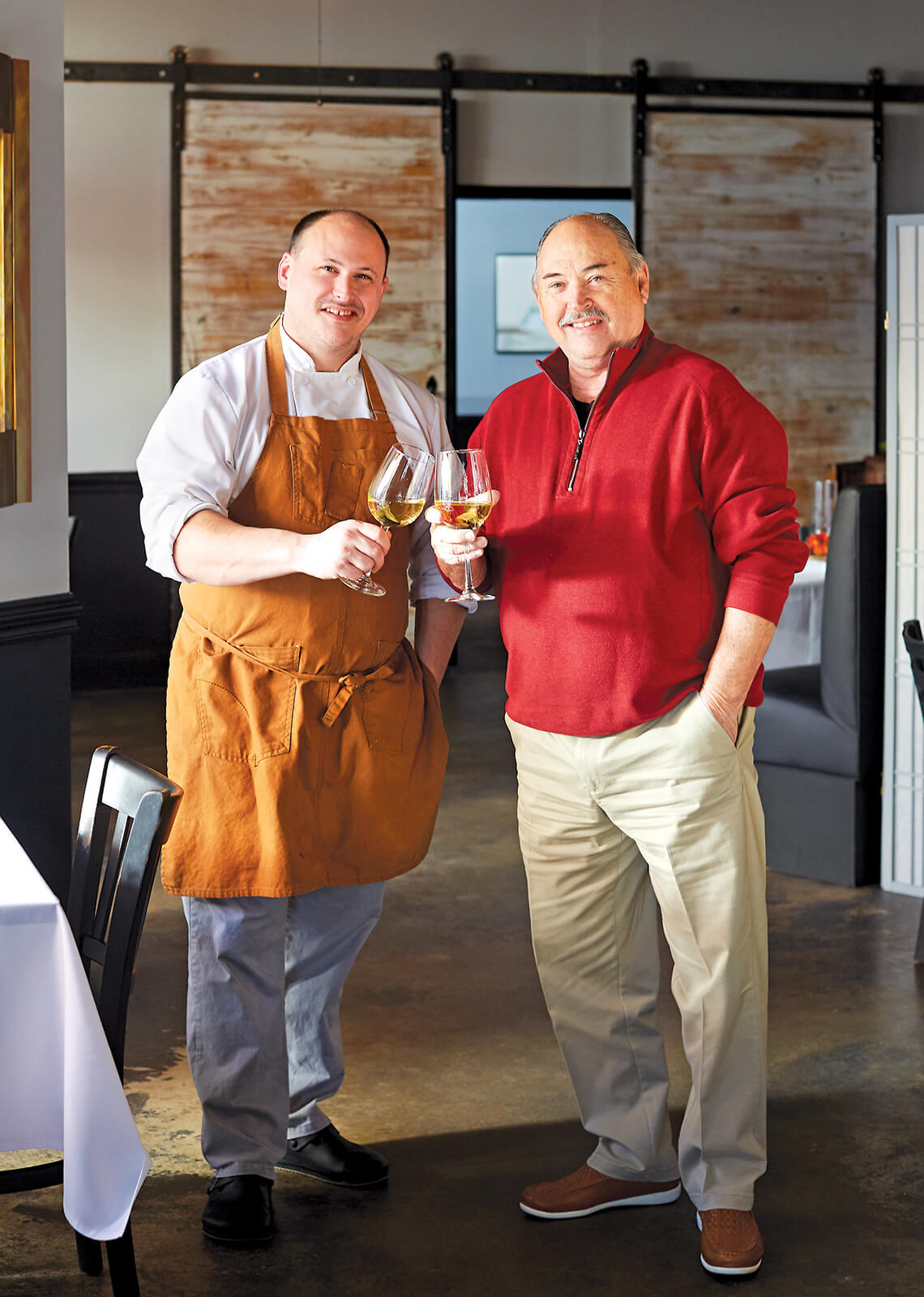 Trey Prescott and his dad, Bob, toast to a big idea in a small town. photograph by Stacy Van Berkel

In 2011, FedEx built a massive distribution hub on the edge of Kernersville, and in 2019, Amazon followed suit. “Good businesses are staying here, and we’re seeing that money spent in town,” Prescott says. “Kernersville used to be a bedroom community, with a lot of people living here and working in Winston-Salem or Greensboro. Now, people aren’t leaving as much. And if people live in Winston-Salem and have friends in Greensboro, they come and meet here for dinner.”

“If people live in Winston-Salem and have friends in Greensboro, they meet here.”

In 2018, while serving as the executive chef at Jeffrey Adams on Fourth in Winston-Salem, Prescott decided that it was time to make a change. “I was looking at the name on the front door, and I realized that whenever I had worked 20-hour days in a kitchen, it was always for someone else,” Prescott says. “Why am I doing this for somebody else’s name on the front door?”

He developed a business plan for an intimate bistro, and his father became a silent partner. They found a location on South Main Street just up from the Paul J. Ciener Botanical Garden. “We had to be here a few months to convince the good ol’ boys to come in for date night,” Prescott says, “but once they did, they saw that it wasn’t intimidating, but comfortable. People really embraced us.”

Prescott finally had a place with his own name on the door — a restaurant where he was able to design everything from the decor to the menu. Since The Prescott opened in December 2018, business has been good. “There was hesitation about doing this in Kernersville,” he says. “At first I said, ‘Nah,’ but I kept it in the back of my mind.” 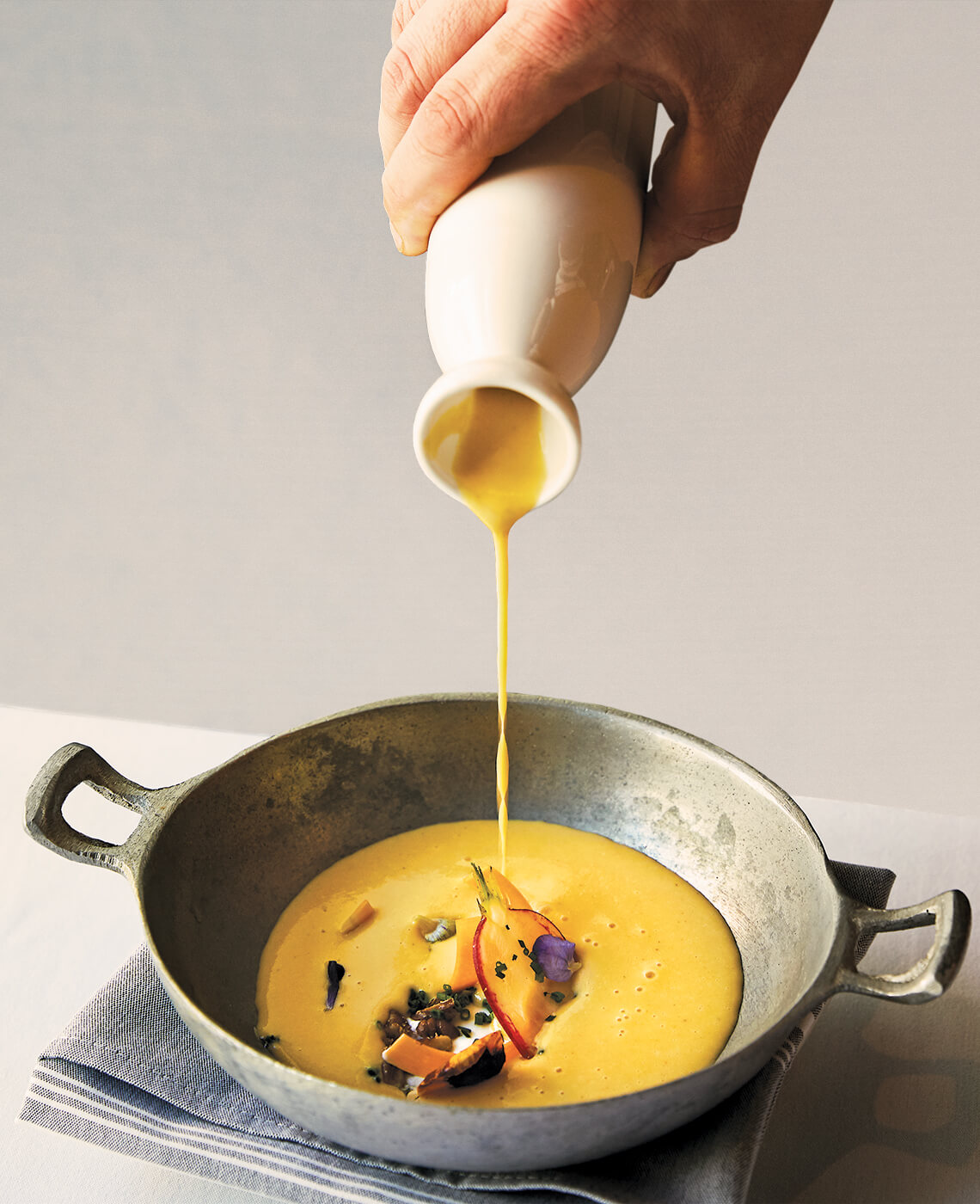 The secret behind The Prescott’s butternut squash soup with pecans and kale pesto? The chef gets the squash fresh from Harmony Ridge Farms in nearby Tobaccoville. photograph by Stacy Van Berkel

Bill Cissna and his wife, Kathy, have been customers from the beginning, and they say that the restaurant has not only drawn people to Kernersville, but it’s also helped keep residents dining locally.

“We had good restaurants before, but for a farm-to-table, high-end kind of experience, you went somewhere else,” Bill says. He and Kathy like the shrimp appetizer with walnut-horseradish sauce, the lemon-caper grouper, and the overnight pot roast, and they’ve attended wine dinners here, including one based on the menu from the first trip of the Orient Express. “It’s a real pleasure to have that kind of restaurant seven minutes from us,” Bill says. “It’s our Cheers to a certain extent.”

Understanding his customers — and listening to them — has made a difference. Prescott has brought back a few early menu items that people missed and added some that he’d never considered. For example, he’d resisted having sandwiches because he didn’t want people eating with their hands and getting messy. But he’s now added a burger with bacon jam in response to one customer in particular: his father. “He said, ‘Where’s the burger?’ So we got a burger on there, and he loves it, and we get a lot of compliments on it,” Prescott says.

The community support has helped Prescott as he’s adapted to changing needs amid Covid-19 restrictions. Whereas before, he created dishes to educate diners about ingredients and techniques and to offer new experiences, he now focuses on food for comfort. Not stereotypical Southern comfort food, but such things as the simple satisfaction of a good piece of fish or a flavorful roast.