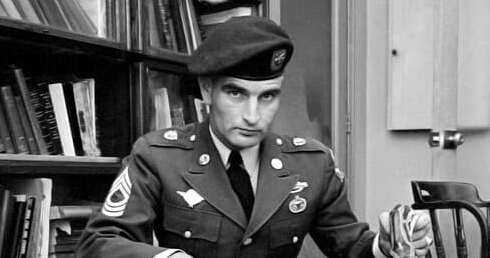 I am generally pro-snake. They eat vermin. They enjoy sunshine. Many are not venomous. But I don’t think that I would go as far as Master Sgt. Dewey Simpson. During the Vietnam War, he rescued a live, nine-foot Burmese python from his camp’s dinner table. (Snake was a common dish in Southeast Asia.) Simpson felt bad for it, so he saved the snake as a mascot of sorts. A friend named it George. The soldiers fed it rats, rabbits, and chickens.

Then came a series of sitcom-style plot developments: First, a general encouraged Simpson to bring George back to Fort Bragg. For “training purposes.” So they put George on a military transport. Oh, boy. A customs officer opened the box he was in and wasn’t prepared to see a live snake inside. Hilarity ensued! Then Simpson had to find a place at Fort Bragg to keep George.

The staff showers seemed like a good spot. (They weren’t.)

In 1964, Simpson found a new home for George: the North Carolina State Museum (now the Museum of Natural Sciences). Some 7,000 people stood in the rain to see George when the exhibit opened. The python grew to 16 feet and became the most popular stop in the museum. George regularly got fan letters and valentines from kids. Not long before the python’s death in 1989 at age 28, a veterinarian confirmed that George was actually … female.

George is the only python to have received an honorary Purple Heart. (She was wounded during a Viet Cong attack in 1963 and carried the scar for the rest of her life.) And as far as beloved pythons go, she may have been the last of her kind: In the 1970s, the museum (and many others) stopped giving its living animals nicknames, to keep visitors from projecting human qualities onto them. After all, only one of us is capable of unhinging its jaw to swallow a muskrat.

Learn more about George the python in an exhibit told from her own perspective at the North Carolina Museum of Natural Sciences.