In 1977, Chuck Robertson and his wife drove the entire length of the Blue Ridge Parkway. He had recently joined the Air Force, a decision made after his father told him that it was impractical to pursue his childhood dream of becoming a park ranger. When Robertson reached the parkway’s higher elevations, he looked out over the mountains and thought to himself, I’m going to live here. “I knew, even back then, that it was where I belonged,” he says. It took Robertson years to make the High Country his home, but — as is the case with many rangers — the life path he chose unexpectedly prepared him for parkway service.

When visitors to the Blue Ridge Parkway see someone like Robertson in a classic, flat-brimmed ranger hat, they often see the solution to whatever it is that they need. If they’re on a trail, worried that bears might attack them, they see someone who can remind them that the creatures are mostly vegetarian. If they’re dealing with a flat tire, they see the promise of roadside assistance. If a visiting family is trying to figure out the function of historic farm equipment, they see a storyteller. Just as visitors have myriad needs, rangers bring diverse offerings. 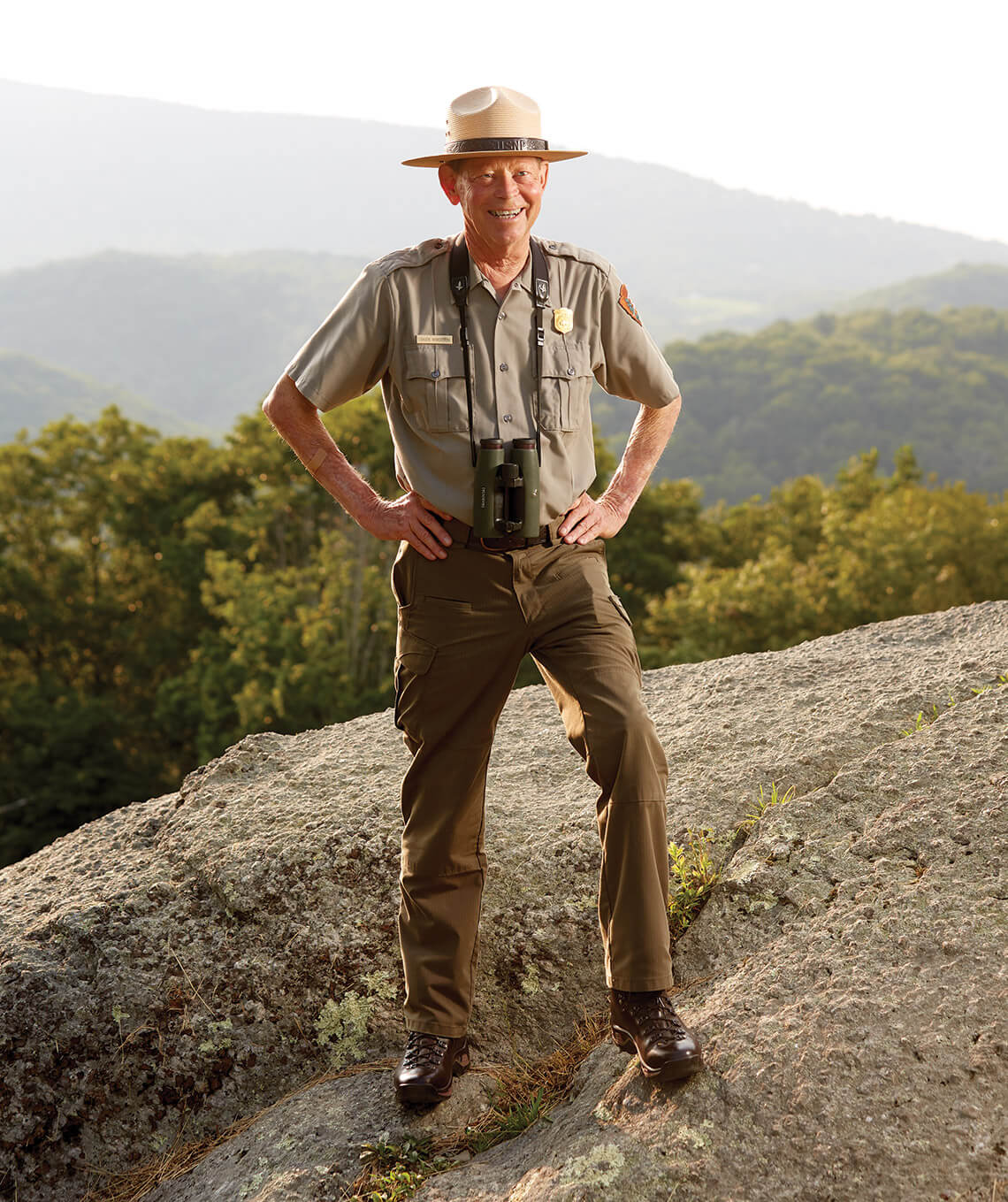 Chuck Robertson spends his summers as a ranger along the picturesque Blue Ridge Parkway — and his winters as a wildlife artist specializing in birds. photograph by Stacey Van Berkel

People are often surprised to learn that there are several types of rangers — typically categorized as either interpretive or law enforcement — and that there are many other positions that officially fall under the “ranger” umbrella. Individually, these people are following their vocations; collectively, they’re fulfilling the National Park Service’s mission to conserve “the natural and cultural resources and values of the National Park System for the enjoyment, education, and inspiration of this and future generations.”

The Blue Ridge Parkway is famously well traveled. But you can be assured that when you talk to a ranger, you’re meeting someone who’s taken the path less traveled — and they care about your journey, too. 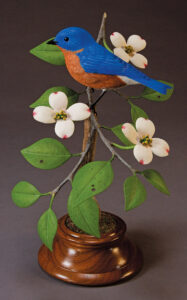 Robertson says that he doesn’t choose fancy names for his sculptures. This one, made from basswood, is called, simply, Bluebird with Dogwood. photograph by Chuck Robertson

After a decade of military service, Chuck Robertson became a full-time artist. “I’d already let my dad overrule me about being a ranger, and I promised myself that I was going to do what I wanted to from there,” he says. For the next 38 years, Robertson found success sculpting owls, herons, songbirds, waterfowl, and birds of prey. But the work could be isolating. So when a friend sent him a job listing for the Blue Ridge Parkway — decades after the drive that he’d taken with his wife — Robertson decided that it was time for a third act centered on working with the public in a way that fulfilled his childhood aspirations.

Now, Robertson walks up to 12 miles of trail a day, helping people identify the bird species that inspire his artwork. “The parkway improves visitors’ lives, and assisting them improves mine,” Robertson says. “There’s something to be said for living out your dreams, no matter how long it takes.” 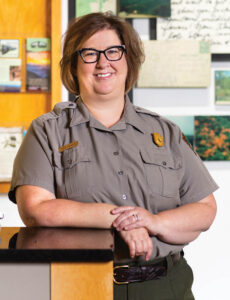 Leesa Brandon believes that it’s important to have a sense of place. She honed hers by spending time on the Blue Ridge Parkway as a child growing up in Asheville, and she remembers admiring rangers in passing. “When I saw them, I thought they must be the smartest people in the world,” she says. “I recognized them as special guardians of important places.” Still, she never imagined that she’d become one of them. Even now, friends are sometimes surprised to learn that she’s considered a ranger because — even though she wears a uniform — she doesn’t patrol the field or lead fireside chats. Instead, she spends her days building relationships and managing projects with the communities and organizations along the parkway.

Many national parks are islands unto themselves, but the parkway is linear, threading together 29 counties in North Carolina and Virginia. It dips in and out of communities, and so do its visitors. “For a lot of people, a special part of their day is getting off the parkway for experiences in neighboring communities,” Brandon says. “They tell their friends about what they did in Sparta, Spruce Pine, or Asheville.”

Along the parkway, Brandon says, visitors learn about the culture of Southern Appalachia. “I love helping people have rich experiences,” she says. “The parkway is an opportunity to remember where we came from and to think about where we’re going.”

When Josh McMann enrolled in a required college English class, he didn’t know that it would change the trajectory of his life; he just knew that he needed the credit hours. But one of his professor’s reading assignments was a nature anthology, and McMann was amazed to discover that there were others who, like him, longed for a life outside of the proverbial rat race.

“The part of Florida I grew up in was all hustle and bustle. I didn’t fit in, and I didn’t know what to do with my life,” McMann says. “Then, I was reading these stories about people going out in search of wilderness. There was John Muir, climbing high mountains, and Thoreau, just walking around.” McMann was inspired. “What they were doing, and the way that they were thinking about the outdoors, wasn’t something that I’d been introduced to before.”

Seeking adventures like the ones he’d read about, McMann went on to work as a layperson in several national parks out West before managing a campground on the Blue Ridge Parkway and, later, entering law enforcement. McMann recognizes that many of the people he interacts with on the job are reaching outside of their comfort zones, attempting to find the sort of natural-world connection that he found in the pages of that anthology years ago. “People are coming to the parkway to have experiences that might open their eyes and allow them to feel something that they’re not feeling on an average day,” he says, “and I’m here to help them do that safely and responsibly.” 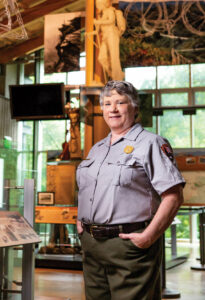 When Jackie Holt was a child, her parents encouraged her interest in history by taking her on road trips around the country. Back then, she was mostly interested in historic homes, given her budding fascination with architecture. Predictably, her career in preservation started with structure-based sites, including President Lincoln’s historic home. But when she visited the Blue Ridge Parkway, Holt fell in love with the mountains of North Carolina.

When she started working on the parkway, she mainly focused on securing items of interest to store in archives and display behind glass. But then, she began doing field surveys to make sure that the park’s structures were being properly maintained, and the way she thought about the park — and her relationship to it — started to shift. She wasn’t just moved by the log cabins and outbuildings that she inspected; she also connected with the park’s infrastructure. “I saw what the people who designed and built the parkway might have been looking at when they said: Oh, this is where an overlook should go,” Holt says. “I started looking at bridges. Really looking — up close. I started thinking about the Italian and Spanish stonemasons who’d worked on them.”

Suddenly, the bridges weren’t just iconic backdrops; they were wondrous objects imbued with stories. Through a curator’s lens, the parkway’s locust fences — not to mention its flora, fauna and geological wonders — could be seen as part of a giant, living museum with exhibits that are always open for interaction. “I don’t think a lot of people realize that the parkway took 50 years to build,” Holt says. “The motor road itself is a historic object.”

To help him identify a career path, Bobby Fleming’s college counselor asked his student what he enjoyed doing. Fleming shrugged his shoulders and said, “Well, I definitely like to go fishing.” There are naysayers who might have laughed this off, but, fortunately for Fleming, his counselor wasn’t one of them.

At that point in Fleming’s life, he had never been to a national park. He’d never even left his home state of Ohio. But when he enrolled in a ranger program at a technical college and participated in an academy for law enforcement, Fleming knew that he’d found his calling.

After graduation, Fleming headed west, to Yellowstone, and built a career following positions from park to park before serving on the Blue Ridge Parkway. He was drawn to this area of North Carolina because of its trails and its lakes, where trout and bluegill are always wriggling just out of sight.

Thanks to Appalachian State University’s proximity to the parkway, Fleming has met many students who would like to undertake a career that gets them into the great outdoors, as his did prior to retirement. For Fleming, there’s comfort in knowing that new generations of stewards are ready and willing to fill the shoes of the rangers who came before. 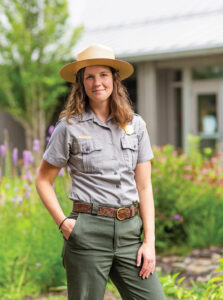 Caitlin Worth. photograph by Tim Robison

It takes some people a lifetime to figure out what they were born to do. But for Caitlin Worth, there was never a question that she belonged in the National Park Service. Worth is the daughter of two former rangers who served on the National Mall when she was a baby. When Worth was a toddler, her family moved to Acadia National Park, where she developed her first memories, and later to Great Smoky Mountains National Park, where she spent her formative years and started her career. “It’s like being an Army brat or an Air Force brat,” she says. “But I’m a national park brat. Our backyards are scenic.”

Worth’s father retired around the time that she started working at Great Smoky Mountains National Park. “I often work with people my dad knows and, in some cases, with their kids,” she says. “I keep him connected to the national park family — and it is a family.” When she accepted a volunteer-coordinating position at the Blue Ridge Parkway, her circle widened to include a diverse array of civilians.

Recently, Worth organized a parkway cleanup event where participants ranged in age from 4 to 70-something. Many of them were returning volunteers. Others were helping clear limbs and shovel firepits for the first time. With their many hands in motion, they were able to do in a single day what had taken a lone employee an entire month to accomplish on their own in 2020, when public health protocols limited gatherings.

“I think people got a lot of solace and stress relief from national parks during the pandemic, and they’re looking for ways to give back,” Worth says. “I’m still amazed by the turnout we had, though. Those volunteers could have been anywhere that day, but they chose to spend their time working with us on the parkway.”