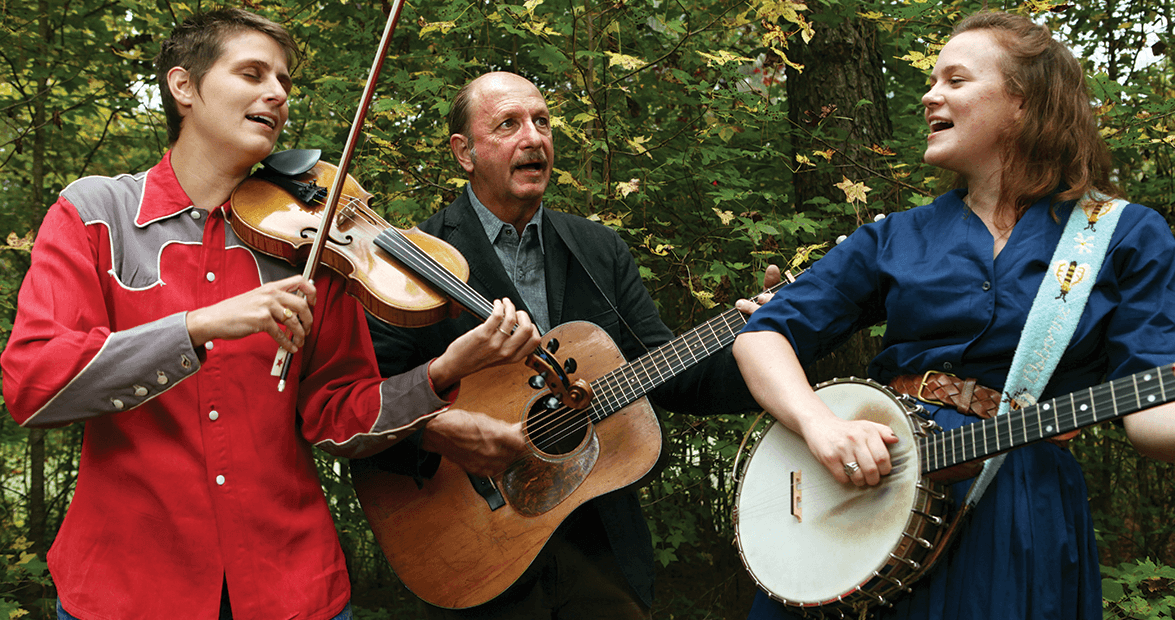 On a mild night, The South Carolina Broadcasters are playing outdoors at Sessions, a Greensboro beer garden, the musicians clustered around one microphone with banjo, fiddle, and vintage Gibson acoustic guitar. They alternate between mountain gospel barnstormers and tradition-tinged ballads of their own construction. Between songs, guitarist David Sheppard looks up the gentle slope to the building that houses Sessions’ indoor bar and remarks he’s not used to seeing it from this angle; decades earlier, this was his guitar shop.

“I love the building, and I’m really, really happy that it’s still there at all,” he says. Having started in 1916 as DS Freeman’s Grocery, the corner of Spring Garden and South Chapman streets is home to nearly a century of local history. And such regional continuity is the lifeblood of the string trio playing old, old Appalachian songs tonight.

This isn’t just another show for the band — it’s a homecoming of sorts.

After all, The South Carolina Broadcasters — David and Ivy Sheppard and Sarah Osborne — came by the name honestly. David and Ivy, both North Carolina natives, were living in Charleston when they started the project about five years back. They met Osborne, who grew up between Saxapahaw and Graham, at a show in Kernersville in 2012, and she quickly joined. Soon after, the Sheppards decided to move back to their home state and bought a house in Mount Airy.

“It couldn’t have been a better move for us,” Ivy says. “It’s great to be back close to family. And Surry County music is sort of the epicenter of old-time and bluegrass music.” She’s proudly wearing a WPAQ shirt; the AM station, which has been broadcasting from Mount Airy since 1948, is home to her radio show, “Surry Spotlight.”

“One thing about Mount Airy,” David says, “the music never stopped being there.”

Continue reading after the video.

The Greensboro homecoming has an even deeper personal history. Ivy bought her first banjo here, back when the building was David Sheppard Instruments and Repairs. She recalls the old shop with reverence and wonder, and David spins tales of visits by Los Lobos, Doc Watson, ZZ Top, and Creedence Clearwater Revival.

He remembers two men in particular, brothers who had been in a full-fledged Hawaiian band in Greensboro in the ’30s, who would come in and play for hours. “Every time they walked in, everything stopped,” David says, still in awe of their talent. “And they were just two guys.”

Those brothers are likely long gone, yet when David pauses between old-time numbers to ask who in the audience remembers his shop, many hands go up.

Tradition, for the Broadcasters, isn’t a detached, academic thing, but seems as tangible as a 98-year-old building on a Greensboro street corner. And, even with a gentle evening chill setting in, the band finishes with an encore and steps offstage, winded, sweaty, and ecstatic — and ready to speak with friends, fans, and family standing in the night air.