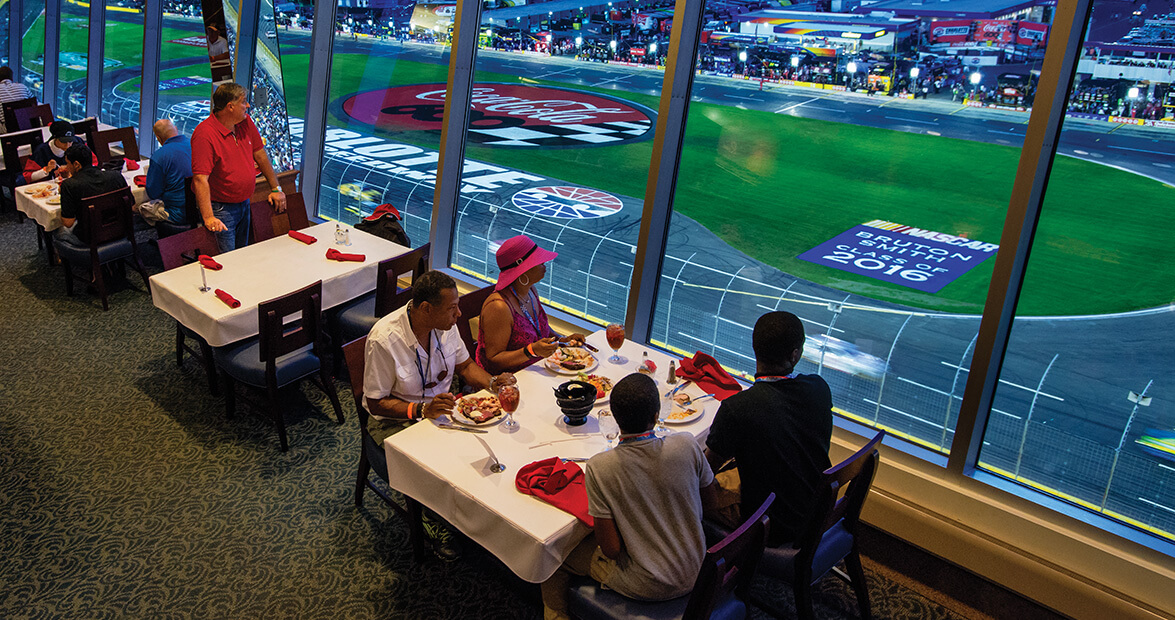 Scene One: A raucous Sunday night. The NASCAR race is on every TV in the joint. Patrons sip their beers and pick at their food and watch the Coca-Cola 600 intently. Suddenly a man sitting under one of the televisions stands up and shouts, “JOHNSON!”

As he yells, the man points at Jimmie Johnson’s No. 48 Chevy as it spins out in Turn 4. The customers eating and drinking nearby follow his finger to where he’s pointing … only he’s not pointing at the television.

The man is pointing at Johnson’s actual car, which by now has straightened out and is speeding down pit road at Charlotte Motor Speedway, six stories below. The man sits down. The 42 cars that didn’t spin out zip by below the windows. The humming roar of their engines fills the room. Diners at The Speedway Club — most of them wearing shorts and sneakers, many of them wearing hats proclaiming their allegiances to their favorite NASCAR drivers — return to their meals.

Scene Two: A mellow Saturday night. A crisp white tablecloth covers the table. The napkins stand at attention. Six stories down, the 1.5-mile, quad oval racetrack sits in shadows outside the window. The faint hum of revving engines filters through the thick glass; it must be coming from a nearby short track, because there are no cars on the track here.

The NASCAR race in Kentucky is on a TV in the bar area, but nobody’s watching it. Frank Sinatra plays over the speakers.

There’s only one other group of people in the 150-200-seat Speedway Club, and they’re crowded around a big table halfway across the restaurant. They’re not wearing shorts or sneakers or hats proclaiming their allegiances to their favorite NASCAR drivers. The roar of their laughter fills the room. 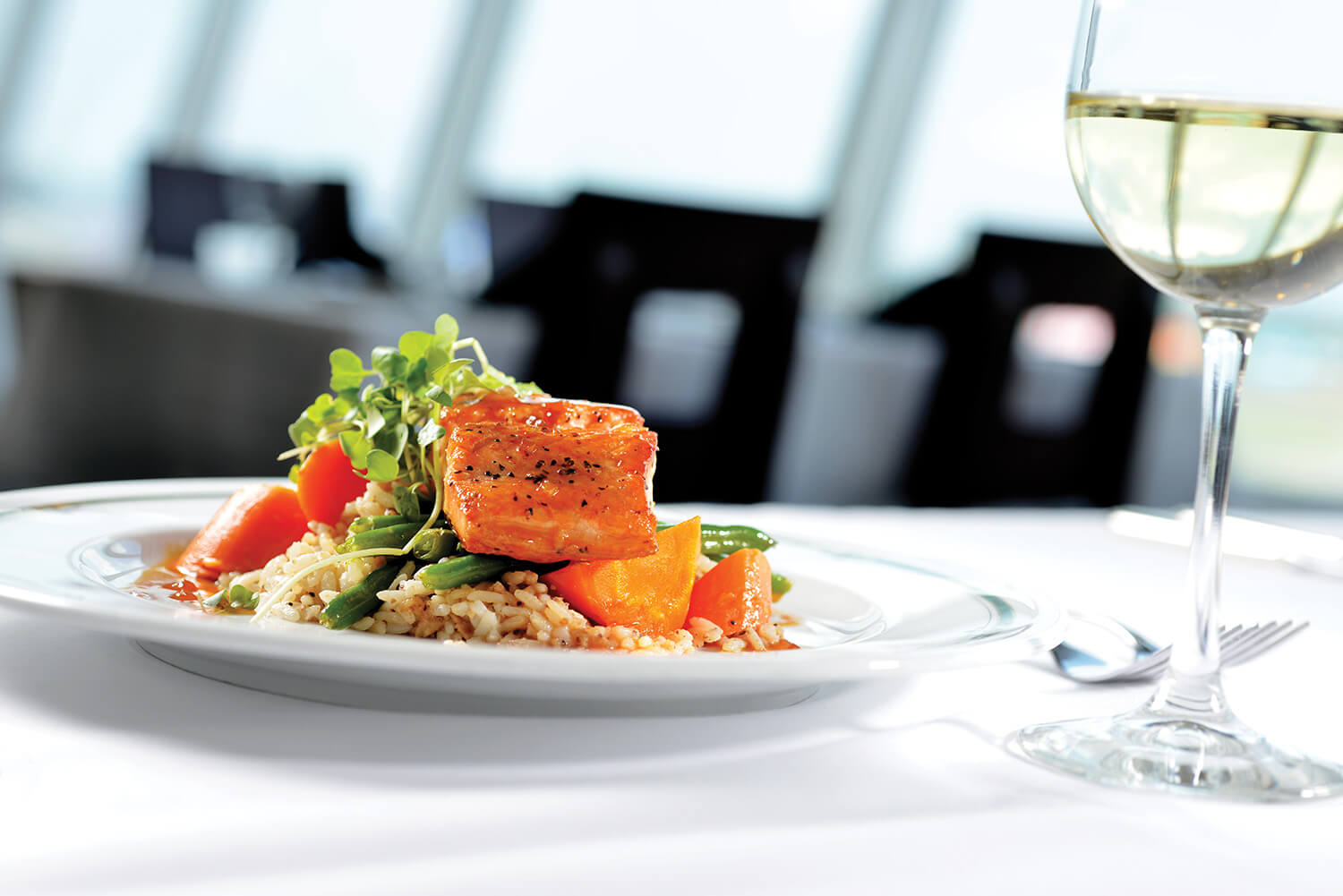 Both of those scenes happened at the same place: The Speedway Club. Since 1987, it has been perched high above Charlotte Motor Speedway, and for a restaurant at a place where cars drive around in seemingly endless circles, it offers endless variety.

General Manager George Kail says some restaurants are like the movie Groundhog Day — same meals, same waitstaff, same customers, same everything, day after day, with no checkered flag in sight. But Kail loves working at The Speedway Club because, every day, it’s so different.

Roughly 800 people ate here on race day back in May. When my wife and I returned on a Saturday night in July, Kail counted a grand total of 16 customers. The night before, it was about 100.

From drivers to their moms to Elvis impersonators to ZZ Top, you never know who you’ll see when you step off the elevator. Wedding receptions, board meetings, and Christmas parties coexist alongside romantic dinner dates, power lunches, and driving fast and turning left.

“We’re always looking for something fun and different to entertain the members,” Kail says. The restaurant is members only, and The Speedway Club has roughly 3,000 of them. Slightly more than half live within an hour of the track. “This place is so fun,” he continues. “You never know who you’re going to see or who you’re going to meet.”

Back to the race. I have watched NASCAR races from the TV booth, the TV production hauler, the officiating trailer, the press box, pit road, and the infield. I even worked on a pit crew one brutally hot night in St. Louis. But none of those experiences captured the tension that makes me love NASCAR so much as The Speedway Club.

Take, for instance, one small detail: During the race, my table still has the fancy white tablecloth on it. But that’s only because nobody else has eaten there yet. Underneath is a white vinyl covering, ready for whoever sits here after I’m finished. Every other table has already been converted to the vinyl look. Somehow, this place is both exclusive and down-to-earth.

Same with NASCAR: the sport of moonshiners run by millionaires. The sport of greasy-fingered outlaws orchestrated by squeaky-clean corporate spokespeople. The sport where teams spend millions of dollars fine-tuning the cars to fractions of fractions of inches, then pound on them with sledgehammers when they get dented.

You can see all of this from the buffet, 10 steps from the window. I turn my back on the race and wait in line for food. There’s not a mad dash, exactly, but each guest has an hour to eat and clear out, so the queue is constant. I grab steak and chicken and potatoes, and wash all that down with a can of beer, because today a bottle would be bourgeois and a glass would be as out of place as a right turn down below.

The dessert tray is something to behold, stacked with cakes and cheesecakes and pies and chocolate beyond measure. I briefly consider shouting JOHNSON! and, when everybody looks at the track, stuffing as much of that chocolaty goodness as will fit into my bag.

NASCAR: the sport of moonshiners run by millionaires. The sport of greasy-fingered outlaws orchestrated by squeaky-clean corporate spokespeople.

Two months later, I’m back. My wife and I take our time studying the menu. This time, we’ve got all night, and we plan to take it. The waiter adroitly appears when we need him and disappears when we don’t.

She gently grills him on the menu. He knows every item like Jeff Gordon knows every turn on the racetrack below. If the waiter doesn’t have an answer, he admits it, and goes looking for one.

I love waiters who answer honestly when asked what their favorite item is. He’s a big fan of the salmon, only he subs out the sides. It’s fitting that he recommends something you wouldn’t normally get every day.

The filet caprese captures my eye because it combines two of my favorite food items — filet and a word I’m not sure how to pronounce.

As we wait for our entrées, we munch on the freshly baked bread. We crunch through an order of goat cheese crostini with rapini. We nurse wine. The sun sets, casting the silent track into darkness.

Did you ever take a bite of something so good it made you laugh? That happens when my meal arrives. I think about what Kail told me about being glad that he works at a restaurant that’s different every day. I agree with him, except for one small point: I would gladly eat filet caprese over and
over again.

The only other dinner party here leaves. When I ate here during the race, I looked around and saw, I’m guessing, 60,000 people across the Speedway property. Now I can see only my wife. Made for the masses, the race-day buffet overflowed with food. Made just for me, my plate feels intimate in comparison. We take our time. This is not a race. We can always come back for that.