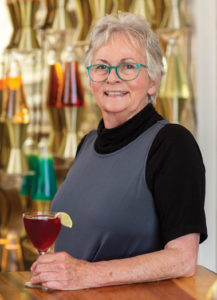 It’s hard to pin down the moment exactly. It may have been somewhere in France, sipping on Le Bon Père William and considering Gothic architecture. Or in Israel, teaching art classes and dreaming about studio space back home in North Carolina. Or much earlier, in her childhood, perhaps, listening to her moonshiner grandfather tell stories of hidden stills. Somehow, whether in a single revelatory moment or in the piling up of hundreds of images and tastes, Brenda Coates one day decided to take a hundred-year-old building beside the railroad tracks in Hendersonville and devote herself to a liquor that most people associate with rich old men in leather armchairs.

But she knew something most of the rest of us didn’t — or don’t yet: Brandy is America’s past and future. George Washington began commercially distilling brandy in 1797. And he was late to the game. By then, Laird’s America had been producing apple brandy for 17 years (and still is today). And now, brandy is making an American comeback. Across the country, distilleries are popping up and bartenders are luring drinkers to what the French call eau-de-vie, or “water of life.”

When Brenda finished renovations on her historic building in 2018, lined the shelves with dozens of brandies, and opened The Brandy Bar, she wasn’t hopping on a bandwagon or following a trend. She was chasing a flavor.

Brandy means many things — cognac, Armagnac, pisco, grappa, applejack, and on and on — but what it comes down to is fruit and time. And a little heat. Most brandies are made by fermenting fruit into wine, then distilling that wine over a flame. “Burnt wine,” the Dutch named it, and from that word, brandewijn, we get ours. After distillation, the cooked wine is aged in barrels and sometimes mixed with other flavors — water, fruits, wines, more brandies. Years later, it’s ready to drink.

If in your head you’re carrying around that old guy lounging in the armchair with his pipe, Brenda would like you to know that brandy is whiskey’s long-lost cousin. “The only difference between brandy and whiskey,” she says, “is that brandy is made from fruit, and whiskey is made from grain.” If you don’t believe her, listen to this especially old guy named Samuel Johnson: “Claret is the liquor for boys; port, for men; but he who aspires to be a hero must drink brandy.” 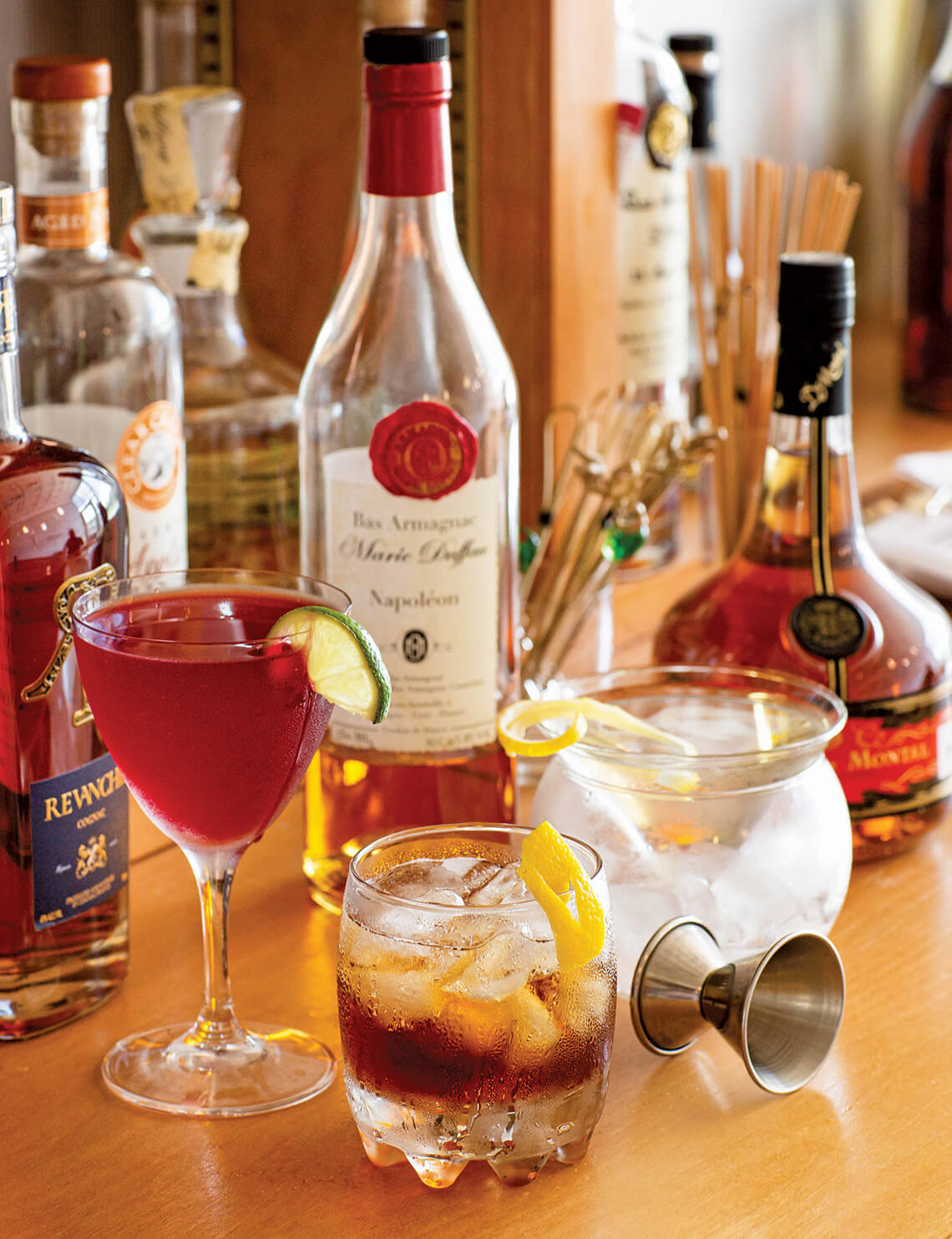 Classic selections with a brandy twist include (from left) a cosmopolitan, a Vieux Carré, and a martini. photograph by Tim Robison

Brandy doesn’t have to be liquid dessert sipped in front of a fireplace. It can be punchy or fiery. And it can be mixed. The Brandy Bar’s menu boasts dozens of cocktails, all built around brandy. There are classic brandy drinks like the brandy Alexander, the brandy smash (a 19th-century favorite), and the sidecar. There are also lots of remixed regulars — a Manhattan with apple brandy, an old-fashioned with Copper & Kings brandy, a martini with Christian Brothers Frost White brandy. And there are lots of original creations, too.

Every week, Brenda and her bartender son, Bart, work up new drinks based on a theme. During a full moon, they serve a Harvest Moon (applejack, cinnamon bitters, and apple cider). They adjust old standards to suit: The Bloody Mary becomes a Bloody Moony (brandy, horseradish, Worcestershire sauce, and so on).

The next week, the theme might be The Bucket List or Johnny Appleseed or football, and so they’ll start experimenting again. “It’s the educator in me,” Brenda admits about all of this extra work week after week: finding a theme, doing research, creating five new drinks to feature. She types up bits of story and trivia to entice and educate her drinkers. For example, sidling up to the bar on a Friday night, you could learn that an apple has 57,000 genes, far more than a human. Or that some indigenous people in the Northeastern U.S. called the moon in February “Hunger Moon” because heavy snowfall made hunting difficult.

Or you could skip the cocktails, order a flight of brandies, and learn that you’ve overlooked a spirit you now want to catch.

Nothing in Brenda Coates’s background suggests that she would have wound up here, standing behind a bar in a former shoe and harness repair shop, hawking brandy. Her life had mostly been art. She was raised in Henderson County but set off for the Pratt Institute to earn her MFA, experimenting with sculpture and architectural design. After she earned her degree, she took a position as the assistant to the curator of the Brooklyn Museum while she worked on her own art installations. But before long, she missed the mountains of North Carolina and moved home. She started teaching at UNC-Asheville and later at Western Carolina University.

Along the way, brandy came to her from unexpected places. During a three-month residency in the French Riviera, she fell in love with a pear brandy but couldn’t find it in the States when she returned. “I tried to sneak some back,” she confesses. 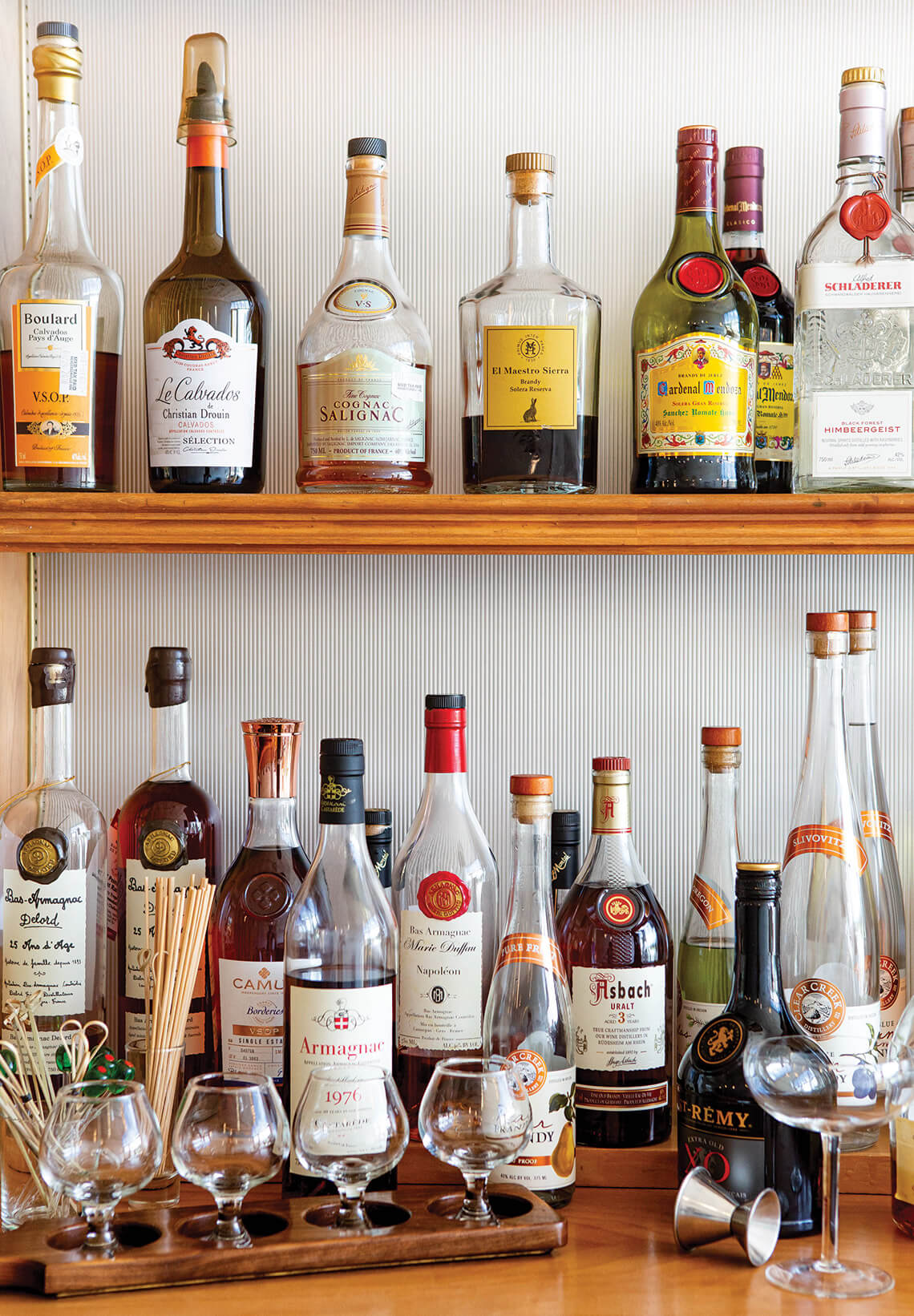 The bar’s more than 55 types of brandy make it a challenge to choose just one to sample. Brenda’s expertise — and flights that range from French to North Carolinian brandies — helps narrow the search. photograph by Tim Robison

Two decades later, after retiring from teaching, Brenda began writing a book, a history of the first European settlers of nearby Fletcher. Amid her research, she found records of Dr. George Fletcher, the town’s namesake, distilling his own brandy, and naturally, she thought, “Well, I could do that.”

So that was the plan: make her own pear brandy. To recapture the flavor of France, she would follow the lead of a 19th-century distiller who settled the land she was raised on. She started reading and calling experts. In Lenoir, she found the owners of the Carriage House distillery. They helped her develop a recipe, and for more than a year, they experimented with approaches to get it just right. But commercial distilling isn’t a quick or easy business. And when the Carriage House closed its doors in 2017, Brenda had to decide what to do with her pear brandy dream. “So,” she says, gesturing at the themed menus and grape and cherry brandies around her, “I created this Frankenstein.”

The wall to the left of the bar is all lava lamps. It’s one of Brenda’s art installations, and when the lamps are fired up, the wall swims with color — ambers and ochres and deep greens. Most everything else about The Brandy Bar, however, is original to the building: the front doors, the transom windows, the huge plate glass. Brenda held onto as much as could be retained to keep the building’s character. In 1989, it earned a place on the National Register of Historic Places.

When it was built near the train depot in 1911, the building stood smack in the middle of the action — the road out front always a cloud of dust from carriages and livestock, people climbing on and off of trains. By the time Brenda found it in 1990, it was dusty and abandoned. The train depot had closed, and Hendersonville’s center had shifted south. She needed a studio space, so she wrote to the descendants of the Flynn family, the forever owners, to see if they might sell. Then she flew off to teach at the University of Haifa in Israel for a semester. A year later, after she’d returned home, the building was hers.

In the decades prior to renovation and the installation of a bar, the 5,400 square feet held art. Brenda welcomed fellow artists and writers to use the studio space while she worked on her own projects. Today, despite the polished interior and tasty brandies from all over the world — and snacks from just up the road — Brenda still wants this corner of Seventh Avenue to be a space for conversations about art and literature.

And it is. Once a month, she hosts a reading and open mic organized by the North Carolina Writers’ Network. Her regulars, a mix of locals and expats from South Africa, Colombia, and Zimbabwe, often chat about films or music as they down Jack Rose and Deauville. The place has the laid-back feel of a European café, where everyone is a regular and conversations carry on night to night, week to week. But of course, those patrons down past the railroad tracks and tucked inside a former art studio/shoe and harness repair shop aren’t mere regulars. With brandy in hand, they’re heroes.