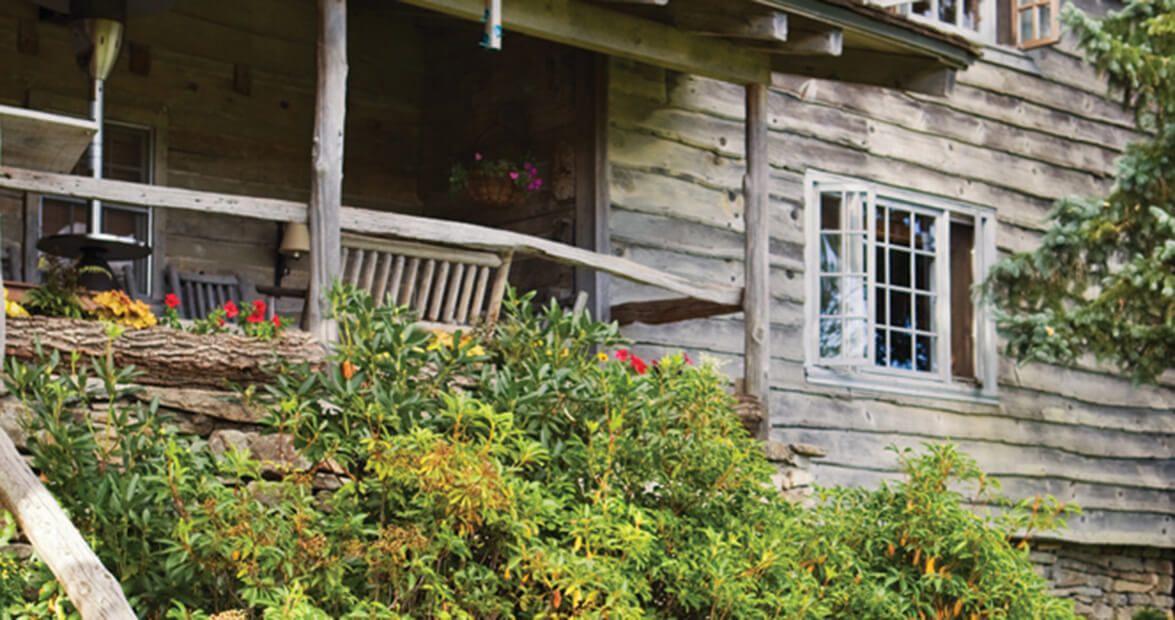 Above Haywood County, where a road with 56 curves will take you 5,000 feet above Jonathan Creek Valley, you’ll hear a constant phrase around the scarlet begonias in the roll-away cart: “Oh, that’s so Swaggy!’’

Being Swaggy — or to be a “Swagger’’ — is this: Hike six hours, see a bear, play with Malcolm the cat, chuck a horseshoe, or eat fresh mountain trout beneath an antler chandelier that’s as big as a bay window. You’re surrounded by the smell of the wood, as fresh as morning rain. And you eat food, farm-to-table, garden-fresh food.

And you’ll work it off. You’ll hike to some place like Boogerman Trail and talk about the bale of wild turkeys you saw. Or you’ll crawl from your covers just before daybreak, grab your walking stick, and feel your heartbeat in your neck by the time you reach Gooseberry Knob.

There, you’ll see a sunrise that’ll feather the clouds with enough colors to exhaust any crayon box. You’ll see the stars blink, hear the crackle of a nearby creek, and see mountains rolling toward the horizon. Then, you get it.

Since 1982, guests have struggled for words to describe this place. You see it in the room journals and thank-you notes. They call it “a sanctuary,’’ “a North American Shangri-La,’’ “my place of peace.’’

Take the Greenbergs, from New Jersey. “In a very real sense, we felt a spiritual connection of a kind that one does not often experience,’’ they wrote in a note in 2009. “Surely, I do not mean to say that The Swag has magical powers to create a reversal of fortune or outlook for those who are not happy in their lives. But for us, the magic is real.’’

For many, the magic is real. They come from all over the world, to this dip between two mountains known simply as a “swag.’’

They come to a country inn, a place of notched logs and big fireplaces that’s open between April and November every year and has won acclaim from almost every travel magazine in the world. It sits on 250 acres, within a dozen steps from the Great Smoky Mountains National Park. It’s a “hiker’s resort,’’ with 15 spots to stay with such names as Woodshed, Two-Story, or Danny’s Room.

To many, it’s become a home away from home. They’ll drop $1,000 to $2,500 on a few days stay and send a thank-you note to the innkeepers they know by first name: Dan and Deener.

Dan and Deener Matthews bought the property in 1969 to make it a second home that they later turned into a church retreat. But in 1982, it became an inn — by accident.

That summer, the World’s Fair came to Knoxville, Tennessee. Hotel rooms close to the event were packed. So, the Matthewses opened up to fairgoers.

Well, those fairgoers never went to Knoxville. They stayed and fell in love with what they saw. Meanwhile, as she made casseroles for her guests, Deener realized she had a knack for hospitality.

“If God gave me this gift,’’ she told herself, “then I might as well use it for his glory.’’

Deener started with a staff of two. Now, she has a staff of 37, and she and her husband make improvements to the property every year to create what they call “high-mountain hospitality.’’

Chef Bryan Kimmett creates his menus from what he buys from local farms, finds at the nearby farmers market in Asheville, or what he plucks from his garden out back. Walk with him, and he’ll pull the flower of a cucumber, scrunch it in his fingers, and have you smell the freshness between his fingers.

He’s from Maryland, a kid who started in the restaurant business at age 15 washing dishes. Now, at 48, he’s making pan-roasted quail, pistachio-crusted king salmon, and smoked trout, in crayfish-and-chive oil.

Next, follow gardener Mike Patterson. He’ll point out a serviceberry tree, with a trunk as thick as a young man’s waist, and dissect the micro-climate in the Smokies, a spot where plants are as diverse as the Amazon.

Or simply watch Linda Duckett, the pastry chef. She calls herself an “old country girl.’’ She came with no confidence. Now, in her third season at The Swag, after taking a few pastry and baking classes at a local community college, paid for by Deener, she sees a future at the top of the
mountain.

She’s reminded of it every day, right before sunrise. “It’s just so beautiful,’’ she says of her favorite spot, the big window beneath the antler chandelier. “It’s so foggy it looks like an ocean, and the sky is just so red it looks like a dreamland.’’

Maybe, that’s it. The Swag, North Carolina’s dreamland. It’s a place where Deener shines. She’s 80, a former figure skater, and grandmother of eight. She’ll call you by name, point you to your walking stick, and make sure you get a personalized note with every turn-down gift, like a stone magnet, a chocolate bear, or a plaque that reads: “Not All Who Wander Are Lost.”

If this is Deener’s ministry, then it’s her husband’s, too. He’s “Father Dan.’’ He’s here about three weeks of every month. The rest, he spends at his volunteer job in New York City at St. John The Divine Cathedral.

On Sept. 11, 2001, he was the rector of Trinity Church Wall Street and its chapel, St. Paul’s, a historic place in the shadow of the World Trade Center. He was there when the towers fell. He helped firefighters and rescue workers, mothers and fathers, brothers and sisters who felt lost.

He saw what he calls the “shadow of life.’’ He still sees it at his spot in New York City. But at The Swag, the place he designed, he’s just the player of his grandfather’s player piano, built in 1906. And after dinner, when the sunset blinks beneath the folds of mountains, Dan will pull out a cylinder of paper that’ll play some tune. Maybe “New York, New York’’ or “Mack The Knife.’’

Then he’ll sing in a plaintive voice, nasally and slightly off-key, as he hits a high-hat cymbal, steady and fast.

“When you’re trying to rest and relax and get in touch with your own spiritual grounding, you can’t do it when you create an environment that makes you self-conscious, oriented to manners and formalities,’’ says Dan, 77. “But old logs make you think of camping, nature, your authentic self, and you let go of all pretense. It’s as the Quakers say, ‘You center down.’ And when you do, you feel closer to God.’’