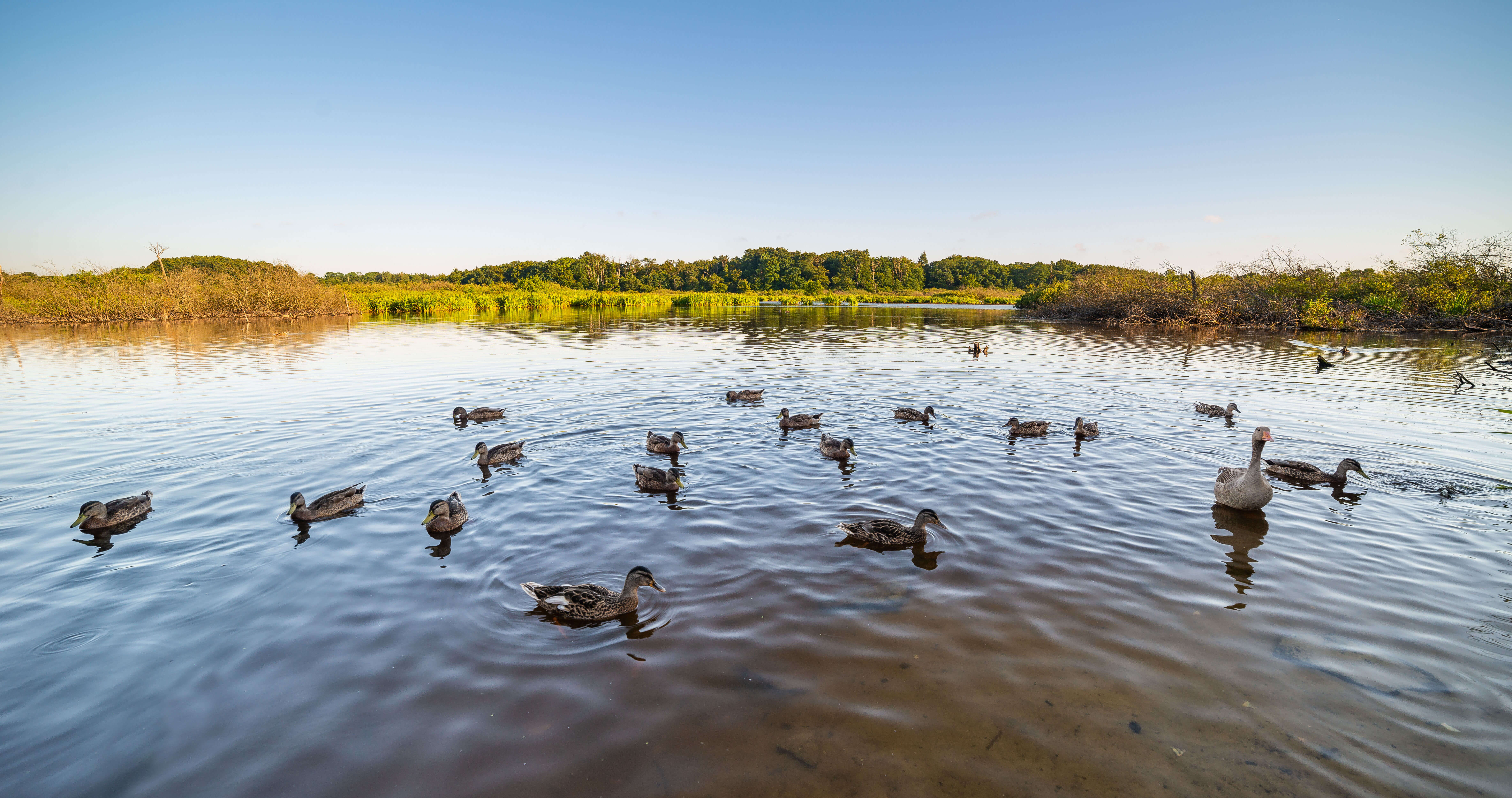 If you had the chance to peek onto back porches throughout Cooleemee, you’d likely find the same thing at most stops: pairs of Bullhole shoes, shabby sneakers reserved for playing in the natural falls known locally as The Bullhole that have been a gathering spot for this tiny Davie County town for centuries.

Lynn Rumley, who’s led the initiative to transform the area into a park, strolls along the gravel path down to the falls one late summer morning, the katydids in full song around her. “One of our objectives is to keep the park as natural as possible,” she says, pointing out a variety of trees, predominantly oak and poplar.

The trail opens up onto a large, sandy beach. A small gaggle of Canada geese are honking. On this morning, they have the falls to themselves. Rumley spots a great blue heron nearby and an egret, pure white against murky ripples.

Huge rocks, polished smooth by the water’s relentless flow, line the area; regulars tote inner tubes when they visit here, ready to catch a ride down the slippery brown slabs.

“It’s hard to see, but that’s Turtle Rock over there,” Rumley says, pointing across the water. “See the head?”

RiverPark at Cooleemee Falls-The Bullhole opened in 2004, but the 80-acre site continues to evolve. The property, which straddles Rowan and Davie counties on the South Yadkin River, is a key access point along the Yadkin River system.

“Long term, we would like to see a number of recreational activities at different places along the river courses, including hiking, biking, canoeing, and even equestrian activities,” says Jason Walser, executive director of the LandTrust for Central Carolina, based in Salisbury.

Through churches and civic and school groups, the town raised in 16 months the $1.1 million in grants and donations needed to convert the Cooleemee Falls area into a park.

“It is absolutely a product of grassroots efforts,” says Rumley, remembering the organizing rally for the park, which drew some 600 people. Pretty good for a town with a population of 907.

“It was a gathering place for people,” says Rumley, who refers to the location as a vital landmark. “We didn’t want to lose it.”

The local population’s connection to the Bullhole goes way back. A Fluted Clovis point, an American-Indian spearhead from 10,000 B.C., was found here. Before the Civil War, one of the largest gristmills in Rowan County, which at the time also encompassed Davie, was at this location. And at the turn of the 20th century, Cooleemee Mill, powered by its own dam, was built here.

Local lore contends that a bull ox hauling timbers across the river when the town was being built slipped near Cooleemee Falls, disappeared in a whirlpool, and was never seen again.

The area’s rich history inspired nearly two dozen folks to form the Cooleemee Historical Association in 1989, and, out of that group, the RiverTask Force was born in 1999.

“We took initiative,” Rumley says. “[The area] was an endangered piece of history.”

RiverPark is now a separate entity, owned by the town of Cooleemee and managed by the community-based nonprofit RiverPark at Cooleemee Falls, Inc.

When the park was named, locals insisted “The Bullhole” be attached to the name.

In her office at the historical museum, Rumley clicks on files at her desktop computer. Her husband, Jim, has scanned in hundreds of photos of The Bullhole over the years.

Masonic picnics took place there before the mill was up and running in 1901. Folks wore their Sunday best. In one 1907 photo, a young woman with bobbed hair and her knees tucked beneath her is running her hand through the water. The composition resembles that of a fine painting. In another photo from the 1910s, several women, dressed in dark taffeta dresses, some with delicate lace collars, stand in a row.

During this time period, a stone swimming pool was built and featured a bath house and lifeguards. Back then, public bathing was still “pretty edgy,” Rumley says. “We believe this was one of the first inland public bathing facilities in the state.”

Four 1926 bathing beauties, their swimsuits ending a few inches above their knees, gaze out from one photo. Dress these days at RiverPark is decidedly more casual.

On the Rowan side, the park features a picnic shelter, restrooms, and three gravel paths leading down to the falls. You can hear the water as soon as you get out of the car. Green benches dot the trails. A canopy of trees provides cool shade even on hot summer days.

A canoe portage allows paddlers to make their way around the dam by a half-mile path through the woods. Before the portage, the dam was the only obstruction on the South Yadkin River, Rumley says. Otherwise, it’s a straight shot from Iredell County to the Yadkin River.

RiverPark owns 32 acres on the Davie County side of the river and has plans to acquire seven more. Amenities planned on this side include a river outfitters shop, zip line, a science education center, an observation boardwalk over the wetlands above the dam, and riverboat rides.

Eventually, RiverPark hopes to reinstall a steel bridge over the river to connect the two counties.

Joe Jonah, park manager, reports that summer weekends stay busy at the park, drawing up to 250 visitors per day.

“I just enjoy working at the park, and seeing the people enjoy it,” says Jonah, who lives close by at Greasy Corner. “I’m just a history nut. I love history.”

Rumley chimes in: “You’ve fallen in with the right crowd, Joe.”

Rumley comes at least every other Sunday, picking up trash and asking visitors where they’re from. Typical answers: Alexander, Cabarrus, Iredell, Davidson, Mecklenburg, and Forsyth counties, along with Rowan and Davie.

“It really is a gathering place at this point,” Rumley says. “I don’t think we mind sharing this hidden treasure at all.”

She adds, “Every day by my house in the summer is a small parade of young fellows marching by with their fishing poles. It’s good to see.”