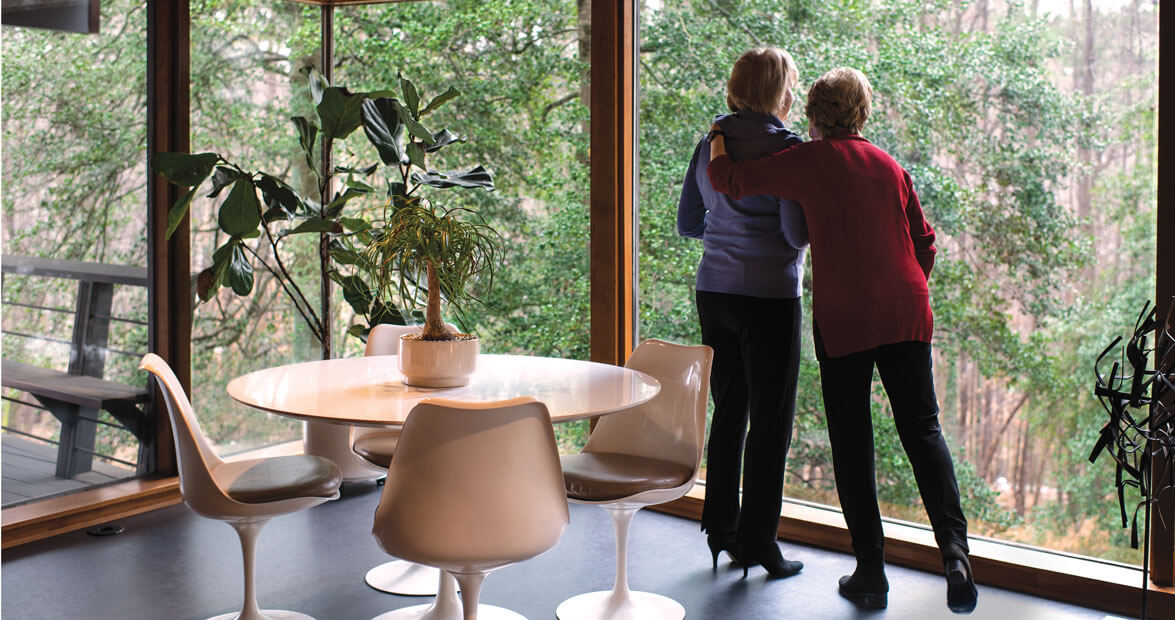 Whenever architect F. Carter Williams sat down with a new client to design a home, he’d ask a seemingly simple question: “How do you want this space to feel?” But the only time he knew for certain that he’d gotten it right was when he built Blue Haven in 1959, the mid-century modernist gem he designed for his family. That spring, soon after masons placed the final Carolina blue fieldstone, Carter; his wife, A.V. (short for Alice Virginia); and their teenage daughters, Carol and June, began filling up the closets and the airy, sunlight-dappled rooms. The smell of new carpet soon gave way to aromas of supper simmering on the stove. In the living room — the heart of the house — A.V. tinkered with new songs on the grand piano, while behind her, massive windows welcomed the trees inside. This was the haven that Carter had envisioned.

The noted professor of architecture at NC State University had no interest in ever selling Blue Haven. But he was a practical man, and at 87 years old, he realized that it was time to say goodbye. For 41 summers, he’d listened to rain drip off the eaves outside the great windows. He’d welcomed guests for birthdays and bridge clubs, and celebrated 40 Christmases by singing holiday songs around the piano with the girls, and later their husbands, then the grandchildren. Blue Haven’s bedroom wing once suffered the wrath of a tornado that toppled pines onto the roof. But Carter took the repairs in stride. The structure was strong, sure, and timeless, and he was certain that it would endure. 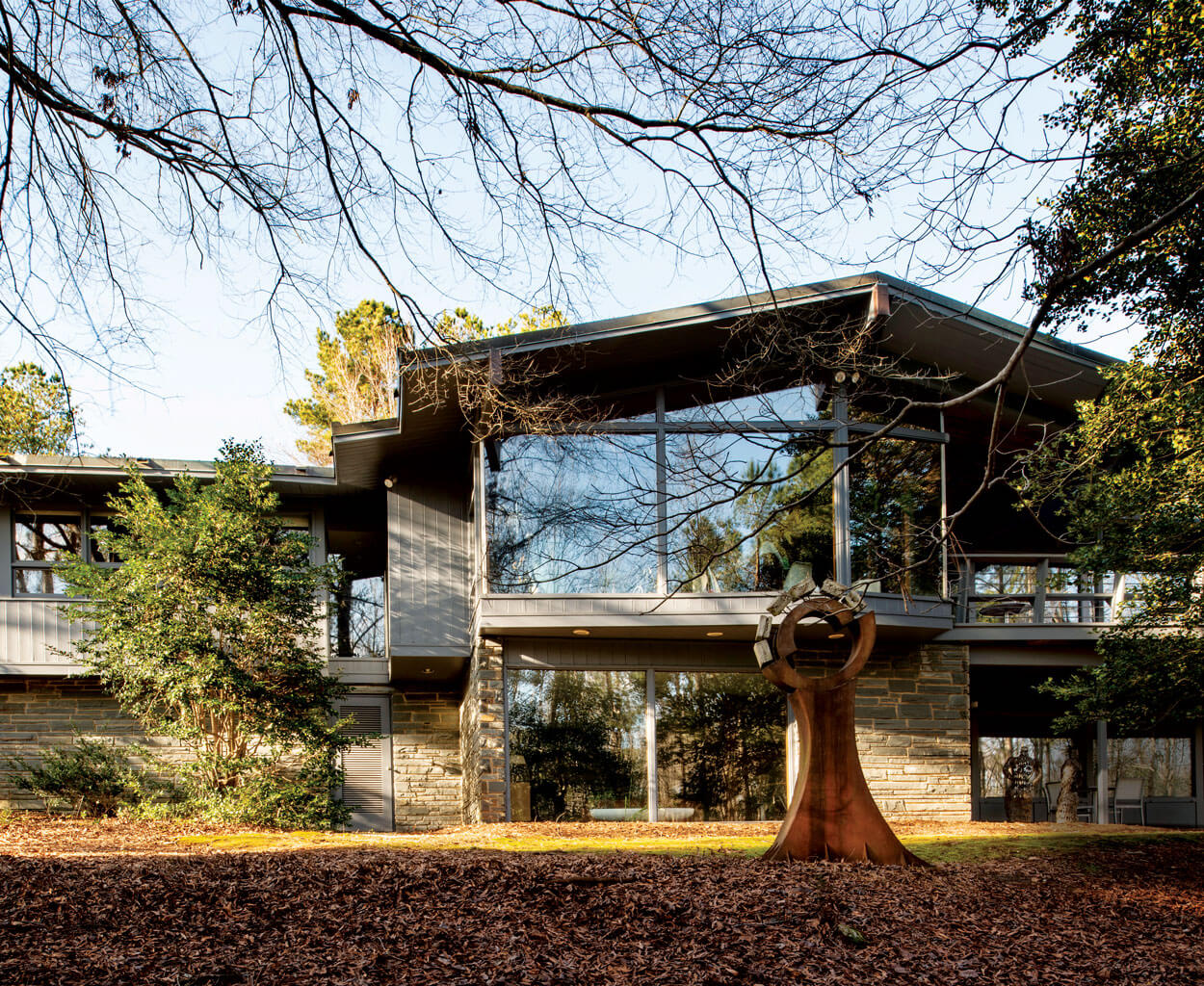 While stone and glass features invited nature inside, Blue Haven also boasted the latest modern conveniences. A lighting system controlled in the master suite allowed Carter to flash the lights when it was time for his daughters’ dates to leave. photograph by Lissa Gotwals

For 41 summers, he’d listened to rain drip off the eaves outside the great windows.

And so, on Easter Sunday of 2000, Carter and A.V. gathered their family in the empty living room, their boxes and belongings having been moved to their new apartment in Cary. Carter expressed his gratitude to the wood, glass, and stone that held irreplaceable memories. His older daughter, Carol, snapped a final photo of him, looking out the living-room windows. Before he and A.V. walked out the front door for the final time, Carter placed on the mantel a framed photo that he’d taken of the house’s new owners, the Harris family, who would close on the property the following day. “I hope they’ll love this house as much as we have,” Carol recalls him saying. “That photo was the only thing he left behind.”

Fred Carter Williams taught architectural design at West Point and NC State — where his papers are now archived — and designed more than 600 projects, including buildings on campuses at Duke, NC State, and ECU; the NC Archives Library; the 1975 renovation of the governor’s mansion; and Pullen Memorial Baptist Church, where A.V. played the organ for many years. The esteemed architects and engineers who taught at State or visited the campus often stopped by Blue Haven to pay Carter a visit. Carol once served punch to the modernist visionary Buckminster Fuller.

Still, luminaries didn’t matter much to teenagers Carol and June, who were more concerned with what the house’s location — eight miles from their old home in Raleigh — would mean for their social lives. For June, a ninth grader at Daniels Junior High School, the thrill of having her own room and 40 acres of woods to roam was quickly dampened by a realization: “Nobody is going to come out here!” she remembers thinking, wondering if she’d ever have a date. “Nobody is going to drive their car up this bumpy dirt road.”

Carol once served punch to the modernist visionary Buckminster Fuller.

The situation felt a bit more dire for Carol, a senior at Broughton High School. Which is why their mother’s first official party at Blue Haven was an afternoon tea. “We literally invited all the moms and their daughters,” Carol says, remembering the hundreds of handwritten invitations, the silver punch bowl, her father directing cars out front. The ladies marveled at the stone fountain in the entryway, the sleek, modern kitchen. The dumbwaiter! “I remember feeling a little bit of embarrassment,” Carol recalls shyly. “I felt so blessed, so blessed to have such a beautiful home.”

The highlight of any visit to Blue Haven — at least for teenage girls — was the bathtub. Carter had allowed each daughter to pick one design feature for the new house. For June: small sinks in both of the girls’ bedrooms. Carol requested a sunken bathtub. Pink tile, three steps down. Outrageous, yet functional and festive. Carter liked it so much that he installed one in the master bathroom as well. Just not pink.

After June got to Broughton, Blue Haven became a gathering place where she and her friends would practice cheers in the basement and primp for high school dances. “My dates had to leave 30 minutes early in order to get me home by 11 p.m.,” she says with a laugh. Boys were allowed to linger before heading back to town. But whispered conversations in deck chairs under the stars could only last so long. Carter had installed state-of-the-art intercoms and a sophisticated lighting system in the house, all of which could be controlled from the master bedroom. “When it was time for a young man to leave,” June chuckles, “Mother and Dad would just start flashing lights all over. Which meant it was time to go home!” 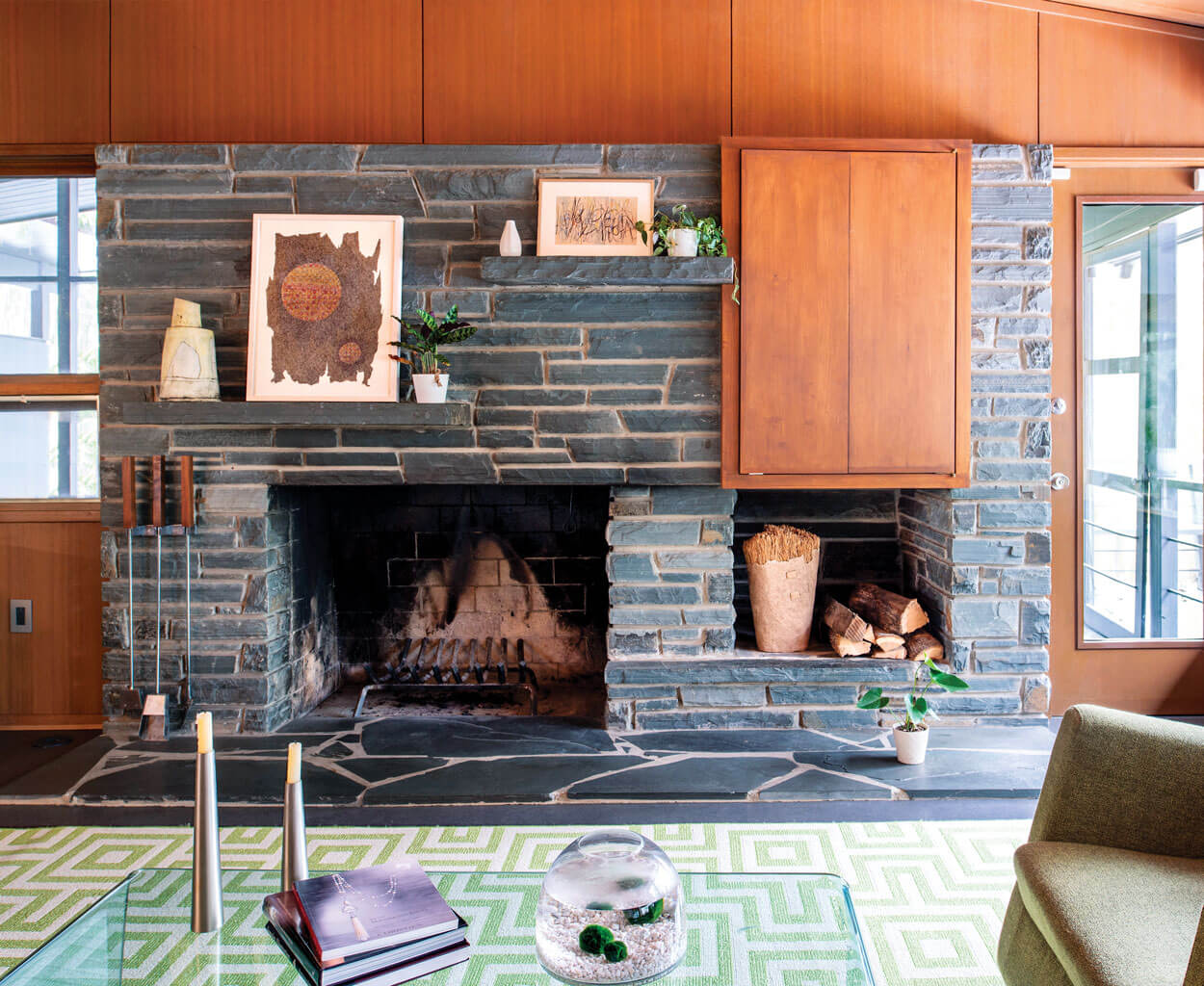 “The house had this way of making you feel warm and embraced by the wood and glass and stone,” Carol says. “It really was a haven — a safe place.” For all of them. After Carol started her own family, her husband, Bob Bilbro, was sent to Korea, and she accepted her parents’ invitation to move back home, arriving on Blue Haven’s doorstep with an energetic toddler and a baby. “Haven was an important word to my father,” Carol says. Indeed, the house is on a street that Carter named: Rest Haven. “He wanted the house to have that feeling.”

Carter was at peace when he left Blue Haven for the last time, that Easter Sunday in 2000. He’d told the new family that he would explain all of the special features of the house as they settled in. When he and A.V. returned to their new apartment, he retired to his study after dinner to fill out change-of-address cards. That evening, he passed away with the pen still in his hand. 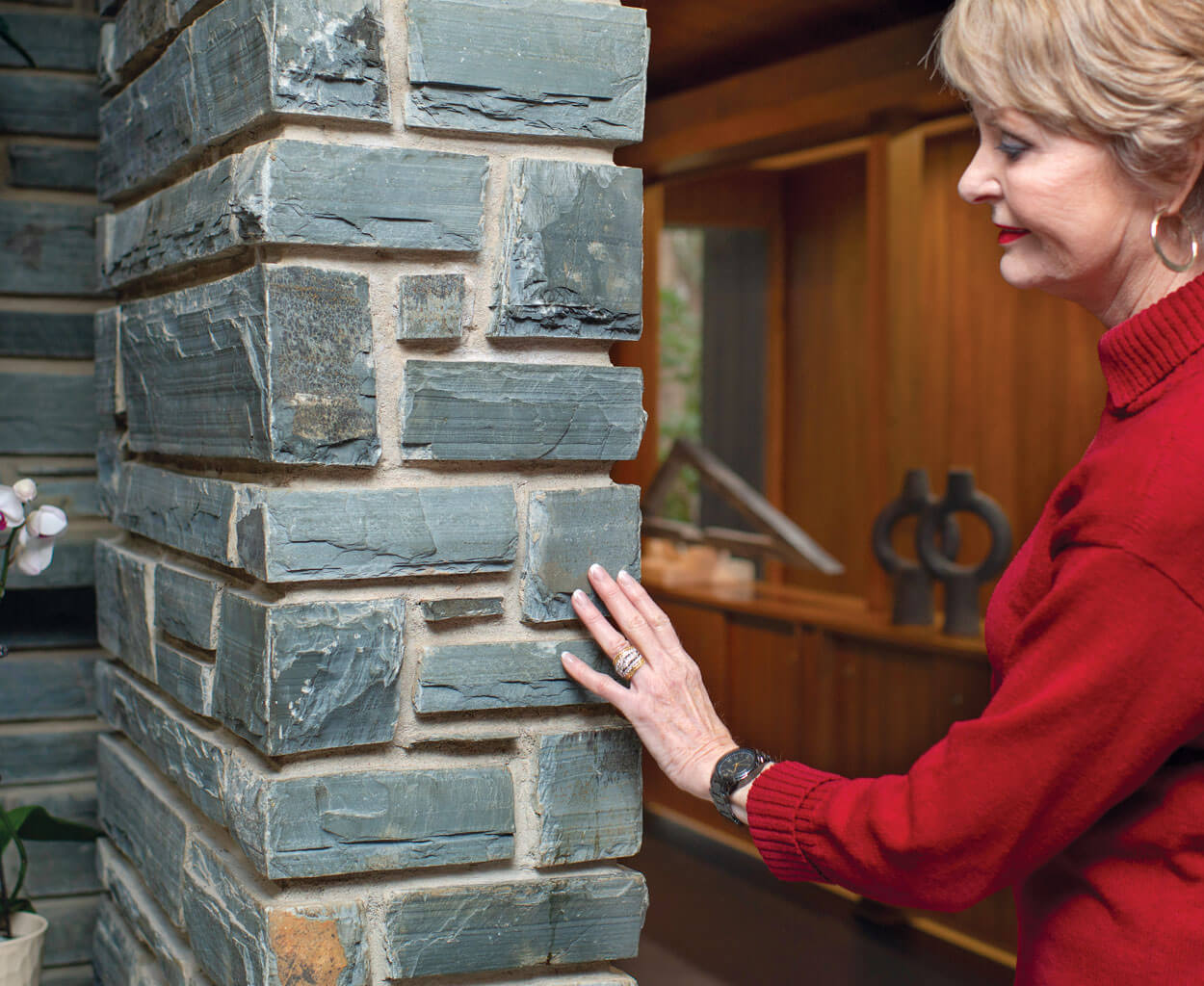 Carol adores the Carolina blue fieldstone that was mined for the house from a quarry in the mountains. Inspired by the hue, her father named the house Blue Haven. photograph by Lissa Gotwals

The landscape architect offered to make updates in exchange for martinis.

The next day, the sale went through. Blue Haven got a new family. Since then, the house has changed hands only one other time, when Jill Maurer, the current owner, bought it. “I didn’t really know mid-century modern at the time,” says Jill, who felt a connection to the house before she and her Realtor even got out of the car. “I’ve never had a feeling like that about a house; never thought I would. But I’ve seen other people experience it when they walk in.”

Jill dedicated herself to learning everything she could about Blue Haven. First, she reached out to the previous owners. Later, she even contacted the original landscape architect, Dick Bell, well-known in modernist design circles and a dear friend of Carter’s. He offered to make updates free of charge, in exchange for martinis.

Like Carol and June, Jill feels protective of the place, its history, and all of the memories contained within its walls. “You sort of feel an oath to the house,” she says. But now, her sons are grown, and it’s time for her to move on as well. The 60-year-old house is once again in search of a new owner, which, even after all these years, is emotional for Carol and June, who watch from their own homes in Raleigh.

“It has been comforting to me to reminisce about the power of place and the power of design in my father’s life,” Carol says. “Dad understood how creating a design for a space could reflect a person’s attitude toward life and leave a legacy to be explored and loved by those who follow.”