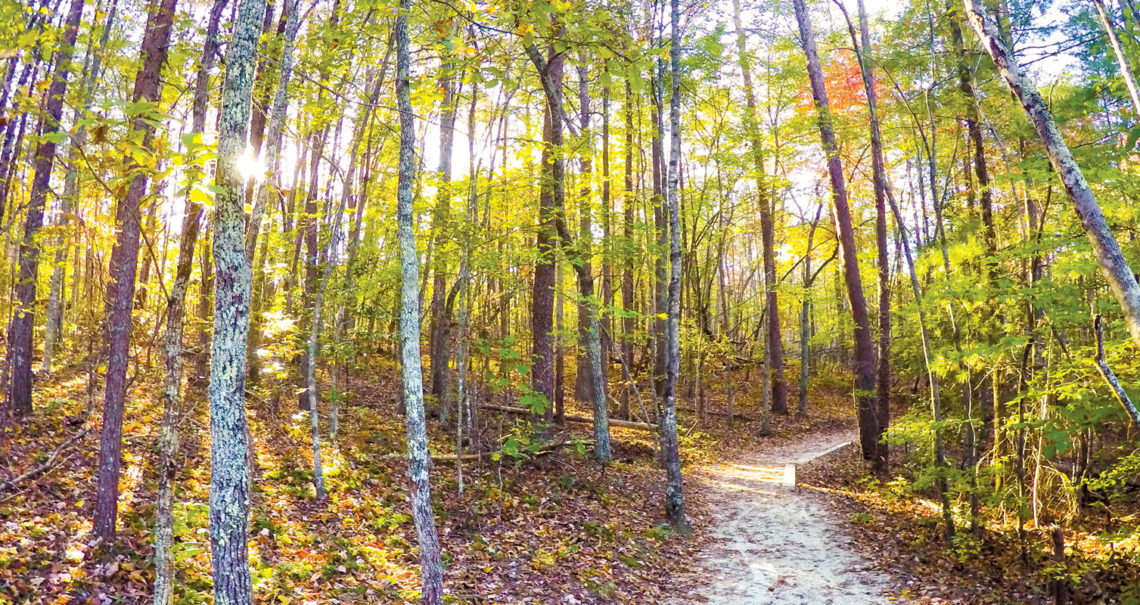 I remember her blue suede shoes. Forty-five years later, I can still see them, their cerulean flicker far behind me, against the mountain laurel and Fraser magnolia crowding the trail to Hanging Rock.

They were hiking boots, actually, not shoes. But blue suede nonetheless — at no time other than the late 1960s have there been blue suede hiking boots. And the sight of my mom’s blue boots had a singular effect: They simultaneously rooted me in place and set me free.

For my family, Hanging Rock State Park was a frequent destination, and back then, it was a place so little-traveled that you could lose yourself pretty quickly if you weren’t paying attention. The trail to Hanging Rock roller-coastered over massive tree roots, where my brother and I competed to see who could go the farthest without touching the ground. We’d sortie far ahead of our parents, but the leash only reached so far. As long as I could see Mom’s shoes, I knew that I was still integrated into our little family unit, safe from all hazards other than poison ivy and yellow jackets. But I also knew that I could roam as far as I liked, as long as those blue suede shoes weren’t far out of sight. That tacit, unspoken agreement was the beginning of a certain kind of freedom to explore.

I often think of Mom’s boots and those old trails because I’ve gone through a lot of boots and a lot of trails in my life since then. Hard rock trails, muddy trails. Just last week, my wife, Julie, and I hiked the beachfront on undeveloped Carrot Island, which fronts Beaufort. You have to time a beach hike just right. A falling or rising tide is the best. A beach walk at high tide is like walking with Goldilocks: The sand is too hard. Or too hot. Or too steep. Never just right. We should have known better.

But it’s a twist of good fortune that there seems to be a different kind of trail matched to wherever we find ourselves in life. On the path to Hanging Rock, the trail was wide enough for a single hiker. (Remember, this was nearly half a century ago.) That’s called a singletrack trail. Singletracks typically wind through less-trammeled country, or over steep topography. They lend a sense of adventure to a hike, and when you’re on the trail alone, the sight of a singletrack trail disappearing over one ridge, then reappearing far on the next mountain over is a welcome assurance.

It’s a twist of good fortune that there’s a different kind of trail matched to wherever we find ourselves in life.

Singletrack trails, however, aren’t Julie’s favorite. She can’t stand talking to the back of my head, and she’s not too fond of getting left in the dust when I get into my zone and start chugging ahead at half-again her pace. She likes to hike side by side, our conversation as paired and linked as our footsteps. That’s why doubletrack trails are her ticket. Old Jeep trails, closed Forest Service roads, and onetime logging paths are wide enough to saunter along shoulder to shoulder, and still largely clear of briars and brush. We can burn up the miles on a good doubletrack trail, and still, after 29 years of marriage — “I only bought the 30-year warranty,” she told me on our anniversary morning, “so heads up” — we can climb a mountain or three and never run out of things to say. I’ll even reach out to hold her hand, but that’s typically a short-lived gesture. Julie likes sweaty hands about as much as she likes talking to the backs of heads.

My favorite kind of trail is one that many folks might not consider a trail at all: a game trail. A deer trail or bear trail or turkey trail or even a heavily traveled raccoon byway. They are subtle, but once you tune your eyes to find them, game trails are everywhere, in wild forests and along urban greenways alike. Clipped-off greenbrier is a first clue, the telltale sign of a passing deer. Look closer, and there are leaves overturned, faint track depressions in the ground, old scars on downed trees where the tip of a hoof clipped the log as the animal stepped over. Following a game trail requires a practiced eye and a lower back that doesn’t mind a workout. You’ll have to bend over and crab-walk through the thickets. It’s astonishing how easily a buck with rocking chairs on its head can squirm through a bramble.

But I simply cannot turn down the invitation of a good game trail. I follow along, alert. Wild animals act like, well, wild animals: They meander from food source to food source. They move from open woods to briar-latticed thickets so jumbled you wouldn’t think fog could find its way through. The trail might branch, then braid a half-dozen times, the leaf litter pocked with large, pressed ovals where the deer bedded down. 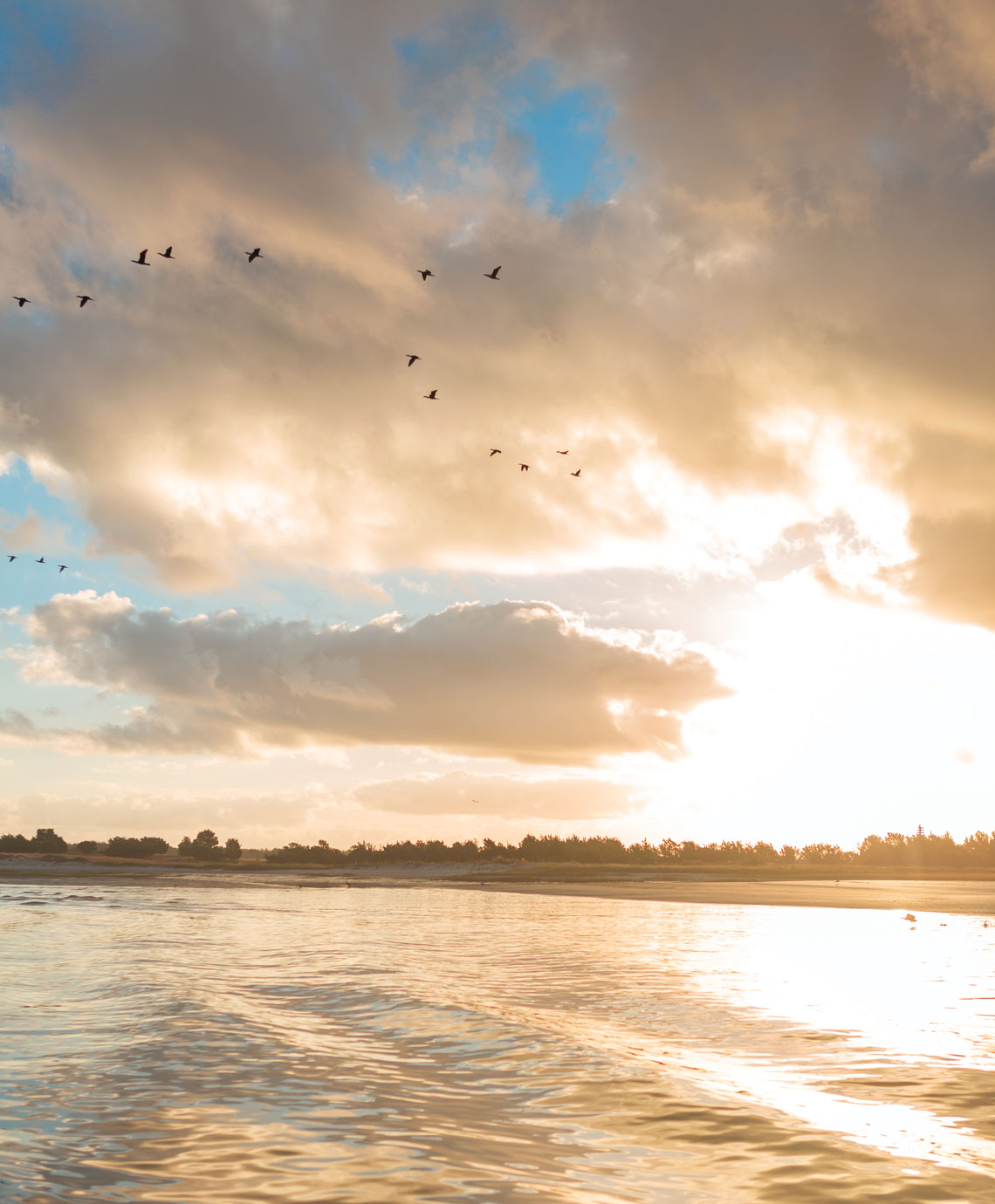 As part of the Rachel Carson Reserve, Carrot Island — across Taylor’s Creek from Beaufort’s bustling waterfront — is a quiet haven for birds, wild horses, and hikers. photograph by Baxter Miller

I stay on track, fending off thorns with my forearms, fascinated to see the woods-world through the eyes of another creature. Often, the trails will give out in some impenetrable bog, or split into so many branches that even a box turtle would have trouble finding passage. That’s when I’ll turn around, not so much disappointed in the dead end as I am grateful for the yearning to take the road less traveled.

That’s sort of how a trail works, I believe. Something has to call to you from out there in the beyond. Following, step by step, you soon learn to surge ahead, anchored by a past that also sets you free.

After all, I wouldn’t love any trail at all, anywhere — singletrack, doubletrack, nor deer trail alike — had I not been led along first by those blue suede shoes.