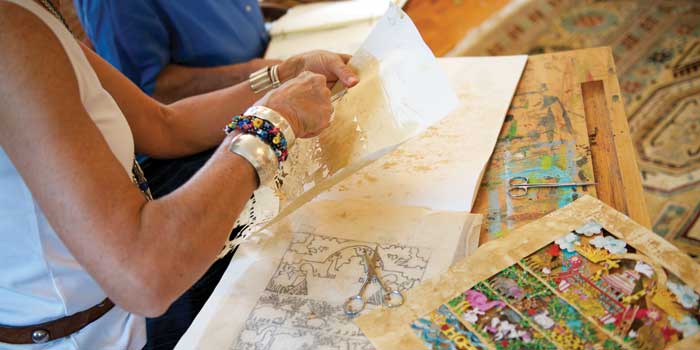 Tina Gregory’s life as an artist started with the family Bible. At age 22, she had recently married and was moving from her hometown of Charlotte to Georgia. Her mother suggested she join the Daughters of the American Revolution to make new friends and handed her a Bible to look for names of patriots.

Before Gregory got to any patriots, pieces of paper, yellow and crisp, slipped from between the pages. As she opened them, works of art unfolded in her hands.

“I was thrilled with them, absolutely,” she says. “I just thought they were so exciting. Look at those tiny little cuts. It’s just kind of amazing.”

Gregory had discovered scherenschnitte — symmetrical images of people and angels cut into paper. The word — pronounced share-an-schnit — is German and translates literally to “scissor cuts.” If you’ve cut out paper snowflakes, you’ve created scherenschnitte. Like Gregory, you probably didn’t know the word for it or that the ancient art appeared first in China nearly 1,000 years ago.

Although German and Swiss immigrants brought scherenschnitte (which the Swiss pronounce share-an-schnit-eh) to Colonial America in the 1700s, the art form shows up in many cultures — Japan, Mexico (where it’s called papel picado), Egypt, Poland, and the Netherlands. Over the centuries, scherenschnitte evolved into a sophisticated art form.

Gregory, who moved to Roanoke Rapids 29 years ago, never tracked down the origin of the papers she found in the family Bible, but their intricacy and beauty drew her in.

More than a hobby

Scherenschnitte started out as a hobby for Gregory. Although she was an art teacher, she didn’t consider herself an artist. The only reason she has an art degree, she says, is because she can’t do math. Her early efforts were gifts for friends.

“I was so excited about this,” she says. “All my friends were getting married and having babies, so I was cutting paper and giving it away.”

She cut images that worked the alphabet in among cute critters and frilly flowers. She crafted whimsical scenes based on Bible stories, such as Noah’s ark overflowing with animals. The ones she made for her children still hang on the walls in the rooms they grew up in.

After Gregory’s first child was born in 1979, an aunt pushed her to turn scherenschnitte into more than a hobby. Gregory wanted to be home with her son, and selling her art was one way to do that. With her aunt Sarah nudging her, Gregory contacted the Museum of American Folk Art in New York City and set up a meeting to show them her Christmas ornaments. She arranged appointments on the same day with Mary Emmerling of American Country and Thomas Woodard, owner of one of the country’s best-known galleries specializing in decorative arts.

“The things I did were based in American design over the centuries,” she says, remembering how risky it felt to make such a bold move. “I knew if those folks didn’t like them, then nobody was going to like them.”

On that trip, she collected enough orders to stay busy for a year. And although she eventually returned to the classroom and taught art for 22 years, she launched an art business. Today, she sells through art shows, like Fall for the Arts on Lake Gaston this month. Her work also hangs in a gallery at Riverside Mill in Weldon.

One look at scherenschnitte, even the simple pieces, and you can tell it takes time and concentration. Curves, lines, and corners are precise. Some designs call for nearly microscopic details.

A variety of such creations adorn the walls in Gregory’s home. The scherenschnitte she found in the Bible hangs on her dining room wall, while on the other side of a doorway, a pair of tulip patterns represents some of her recent work. In her upstairs studio, three large images of trees and the life that fills them dominate one side of the room. A collection of cut-out insects she did for a show at the North Carolina Museum of Natural Science hangs on another wall.

Whether it’s a design created with paper folded two or three times or a flat sheet, much of which she cuts away, scherenschnitte takes focus and a steady hand with sharp scissors to create what is basically paper lace.

Spend any time with Gregory, who at 65 is youthful and energetic, and you soon realize she’s not one to be still for long. At 10 a.m., one weekday morning, she pulls a tray of gingersnaps out of the oven. Earlier, she made fresh lemonade and put together a corn-and-bean salsa to have with lunch. Before that, she went to the pool. And at some point, she made a peach cobbler.

On a typical day, she’s out the door to help set up a local vineyard for a Sip & See, a monthly art show she organizes for the Halifax County Arts Council. Or she meets with the Friends of the Roanoke Canal Museum and Trail to plan another project to boost the local attraction. Or she lends a hand to a fellow artist getting ready for a show, the primary way she markets her own works now. Or she takes a group of out-of-town visitors on a downtown tour to show off the murals her Roanoke Rapids High School students painted on the walls of City Hall and the Masonic Lodge.

Since retiring three years ago, Gregory poured herself into promoting Roanoke Rapids and Halifax County, especially in the arts.

“I have a big heart for Roanoke Rapids,” she says. “This community is my family, my home.”

But as the day draws to a close, she takes a breath and slows down.

She has a rule to be home with her husband, Tommy, by 5 p.m. At some point in the evening, she gathers her paper, scissors, and paint and carries her worktable to wherever Tommy settles for the evening.

There, she quiets her mind and starts designing or cutting or painting. She gets lost in the art that captured her imagination more than 45 years ago.

Fall for the Arts

Lake Gaston’s Fall for the Arts draws visitors with an enticing combination: a juried arts show, gourmet refreshments, and a gorgeous setting. On a tour of five lake houses, festivalgoers will see the works of 50 regional and national artists, who will display fiber arts, ceramics, jewelry, paintings, and woodworking.
Tickets are $35 and available at:
Halifax County Convention and Visitors Burea (800) 522-4282
visithalifax.com

Sunlight pours through the tall windows and glints off the whimsical collections artist Karen Sullivan has frozen in glass. A few yards away, mannequins wearing vintage dresses stand on wide-plank pine floors in a booth full of antiques. Through one set of doors, a cavernous space awaits the next auction. On the building’s other side, quality used furniture fills a good portion of the warehouse.

On the outside, Riverside Mill still looks a lot like the Weldon Cotton Manufacturing Company, a redbrick factory built on the Roanoke River and the Wilmington Weldon Railroad line in 1898. On the inside, shoppers find galleries selling everything from designer clothing at outlet prices to antiques and handcrafted arts, stocked by local and regional artisans.

Open since 2009, Riverside Mill sits on the Roanoke River Canal Trail, which follows the path of the canal that brought water to the mill’s hydraulic pumps.

Tina Gregory shares a recipe for ginger snaps. Gregory often shares the cookies with her friends and family and says they do wonders for the body and mind. Click here to see the recipe.

Diane Summerville lives in Greensboro. Her most recent story for Our State was “Southern Lights” (August 2011).