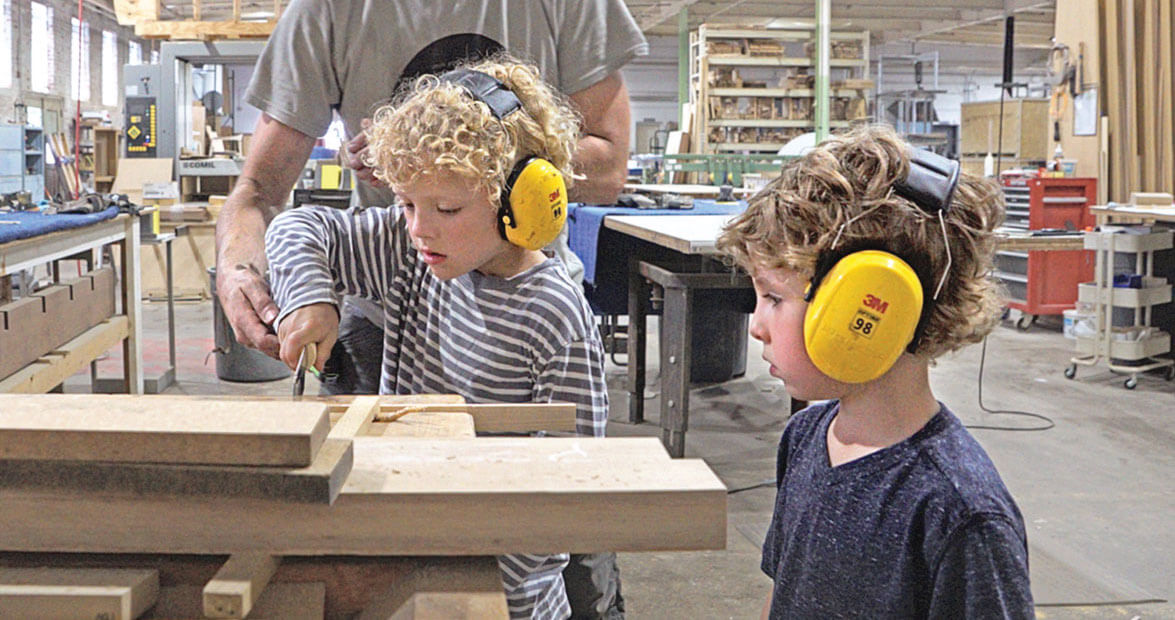 My boys don’t really have any idea how things get made. I think their concept of how, say, a chair comes together is similar to my understanding of the internal combustion engine: Gasoline goes in one end, and “go” comes out the other. Wood and metal enter the front doors of the chair manufacturer, and out the back doors comes the thing my kids tip back on two legs at dinner, even though I beg and beg and beg them not to.

This is not exactly how we end up inside Skram Furniture headquarters in Burlington, but it’s close. I want the boys to see machines and tools, want them to smell the glue-and-wood-stain cocktail of a true woodshop. I want them to feel what I felt when I visited my dad’s basement workshop, the reverence for each tool hanging in its place on the pegboard.

So I write to Jacob and Kathryn Marks, owners of Skram (“Marks” spelled backward), and I ask them: Though you make unimaginably beautiful high-end furniture, could I come to your shop and cut loose two essentially untrained boys for a quick tour? Would such a thing be possible? Probably we will not do thousands of dollars’ worth of damage.

Sure, the Markses say. We have a 6-year-old. We know the words to this song.

Kathryn introduces The Toad and The Wee to the two shop dogs, Anchovy and Dado (like the wood joint). She carts the boys away almost immediately on a very serious-looking orange lift, off into the noise and clatter of the shop. I have no chance to tell her that they don’t listen so well, but that doesn’t matter: The next time I see them, they’re wearing bright yellow safety earmuffs, which means failing to listen is now baked into the equation. I give them fierce hand signals that mean, Pay attention; don’t touch anything at all — but then Kathryn takes them over to a chop saw.

The company motto on Jacob’s T-shirt reads, Seek Perfection. Embrace Imperfection. I seek and embrace. The kids seem mostly safe. Anchovy is trailing them like a guardian angel. Kathryn cuts them pieces of maple for what will eventually become a toy airplane while Jacob tells me about his vision of what it is they make at Skram.

“We want to build something good and enduring in a deeper way,” he says. “We want to build the kinds of pieces that people develop a relationship with.” Skram pieces feature clean, modern lines, but I’m thinking of our beat-up kitchen table at home, with its wine stains and child-inflicted homework gouges. It’s not so different, Jacob explains, taking me first to some walnut veneer that he pets almost like an animal, and then to a huge, finished conference table that manages to be both substantial and airy. Skram pieces might be art at their core, and my kitchen table might be more utilitarian, but the central function is still the same. Good furniture becomes a part of your life.

Jacob and Kathryn take the boys to a workbench at the far end of the shop, which is a 1930s knitting mill the Markses bought intentionally in Burlington to support its nascent downtown revival. Jacob produces a saw that I’m pretty sure is surgically sharp, and he teaches each boy that it cuts only when pulling, not when pushing. He does not tell them to be careful. Somehow, he doesn’t need to. They stand still, wait their turn. When The Toad pulls his saw the last couple of times, his piece of wood becomes two. The Wee does the same. Kathryn tows them back out of the shop on that orange lift, and Jacob goes back to whatever he was making before we arrived. I hang back a little bit and watch without being able to hear while Kathryn reclaims the yellow earmuffs. This noise, these smells. The boys fly their airplanes — something they’ve made, something more permanent than a sandcastle or a sandwich — out the door toward home.