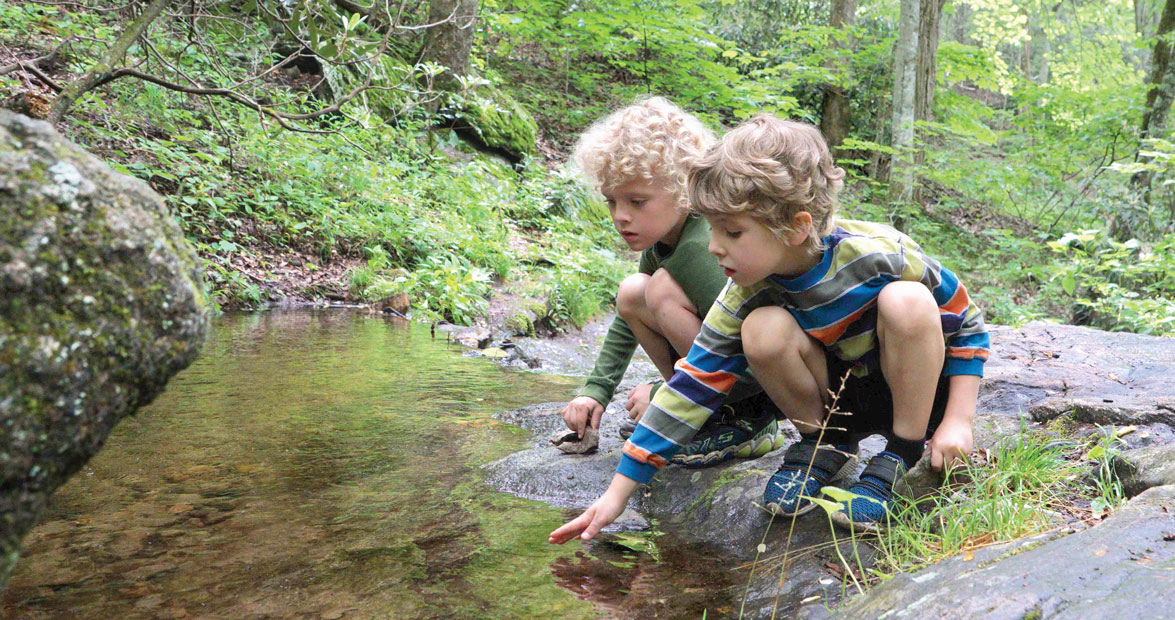 The Blue Ridge Parkway almost begs you not to have an actual plan, though this can be hazardous with boys ages 8 and 5. Where are we going? the kids ask us, over and over. What are we doing? How long will we do it? How will we know when we get there? How much farther?

Settle down, I tell them. We’ll find something, I promise. I’m looking for a boulder to climb, maybe, or a spot with a view and an open field. We come around a bend in the road, though, and find the Tanbark Ridge Tunnel, one of 25 WPA-era tunnels on the parkway in North Carolina. The mood in the car shifts as we drive its full 780 feet, and as soon as we pop out the other side, the boys beg me to turn around, go again.

“What’s above us?” The Toad asks on the trip back through.

“The mountain,” my wife says.

“For real,” I tell him, and I catch a glimpse of his face in the rearview: serious again, thinking now in geological terms.

“By hand,” I say. “They dug it out by hand. And they blasted with dynamite.”

Both boys think this is completely awesome, and as we make several more trips back and forth through the darkness, they can’t stop talking about how they’re going to blast a tunnel out of our backyard when we get home.

We’ve caught one of those glorious mountain mornings that allows for both shorts and long sleeves, and the sun peeking through the clouds after what seemed like a week of rain makes the moment feel a bit stolen. We park at a little trailhead, and when we’re clear of the road, the boys clamber ahead, up the trail, and soon enough they’re in a creek, throwing sticks into a little waterfall and watching them wash into a pool below. My wife and I think about taking a walk, but it’s not quite possible to imagine getting these two kids out of the water. What’s more, a couple coming down the trail stops to say hello, and the husband asks my boys if they’ve seen the statues just up the creek.

“What statues?” The Wee asks him, and the man points to several small towers of stacked river rocks out at the edge of another shallow pool.

This, then, is what we do for the next two hours, what we do instead of eating lunch, the reason we forget to eat at all: The boys build cairns. They are obsessed right now with Legos and Rubik’s Cubes, with anything that combines building and planning, and the rocks fit right in. Each boy grows completely consumed by angles and vectors and what it takes to build something that will hold, even in a current. They don’t even really talk. After a while, The Toad goes back to throwing sticks, trying to build a dam at the bottom of the waterfall by slow accrual, but The Wee stays lost in his towers, building and rebuilding.

My wife is a little bit lost herself, and I know why: She’s a person given to meditation and relaxation, as you would be if you were the mother of these two hooligans, and one of the places I know she often visualizes is another waterfall on another creek a little farther into the High Country. I can see, though, while she watches The Toad come back to the pool to build a new tower alongside his brother, that she’s adding a marker to her internal register. It’s not that moments of calm are rare — books and bedtime is still a pretty snuggly hour in our house, even with a kindergartner and a third-grader — but easygoing, unplanned days like this one feel special, shot through not with meaning, necessarily, but with peace. I see her slip a small stone from the creek’s edge into her pocket. I do the same. If the boys are in no hurry, then neither are we. We’ll eat lunch eventually. Probably. Just not right now.