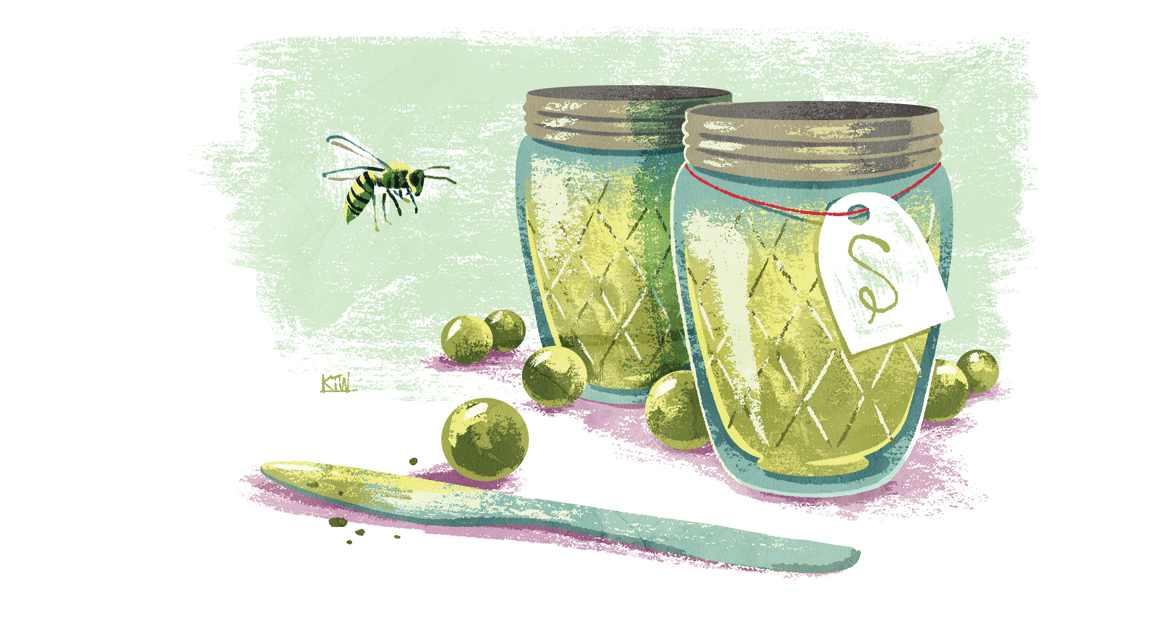 It’s not a convenient food, the scuppernong.

It’s an orb with a thick, leathery, often mottled, and generally nonedible skin, too tart to chew even after its innards are squeezed out. Innards with multiple miniscule seeds that your tongue can’t easily separate. And what’s inside the skin is also suspiciously thick, with a musky taste, the texture of an oyster, and not, it must be said, a come-hither color. The juice is the thing, for wine.

Was the scuppernong what Sir Walter Raleigh’s explorers, a couple of fellows named Philip Amadas and Arthur Barlowe, were referring to when they wrote in 1584 about our coast? That it was “so full of grapes, as the very beating and surge of the sea overflowed them … in all the world the like abundance is not to be found.” Amadas and Barlowe sent back reports from the Outer Banks about grapevines that covered “every little shrub as also climbing towards the tops of high cedars.” Florentine explorer Giovanni da Verrazzano had actually beat them to the discovery, in 1524, writing about a “white grape” in his logbook while bumming around the Cape Fear River Valley.

Although, to my mind, “white” is a stretch, probably because after 100 years of breeding, folks in the scuppernong-know have produced bronze cultivars, big ol’ perfectly round things with the circumference of a shooter marble, that in traditional Tar Heel parlance are described as being “about the size of a hog’s eye.” I did have to say that, I did. Besides, the Latin name is Vitis rotundifolia. You don’t get to be rotundifolia by being petite.

Not convenient, not white, and not dainty, but what a scuppernong’s mostly not is a grape — at least not a grape like the ones I grew up picking. Every summer, I had to compete with vicious, territorial yellow jackets, and pick grapes so my mother could make jelly. This was an all-day affair, when the kitchen was sauna-like from steaming water baths for the Ball jelly jars with their crystal-faceted sides. On stove eyes, more vats boiled and burbled with juice the color of Maleficent’s cape. The counters were covered with paper towels, on which my mother smacked the spoon that she’d used to skim off the foam. The foam sat there, violently purple and globby and disgusting, a cross between melted cotton candy and Jabba the Hutt.

The only really good thing about grape-picking days was using grape guts as a weapon against your sister, who was whining about being allergic to bees. Repeat the two words I’ve been mentioning about what scuppernongs aren’t, really fast — itsnot, itsnot, itsnot — and you’ll know why the guts were effective weapons, and made excellent eyeballs at a Halloween haunted house. Scuppernong guts have the same qualities, a plus in anyone’s book.

Not even close. Not you, I mean. The years. The scuppernong didn’t work its way up the symbol ladder until 2001, while the state toast was OK’d in 1957. I’m indignant about this Johnny-come-lately designation, because there’s a vine on Roanoke Island that covers half an acre and has been producing scuppernongs for 400 years — possibly the oldest cultivated grapevine in the world. Four hundred years! It’s actually referred to as “the Mother Vine,” one of the few instances in which the phrase “the mother of all” is used in a complimentary fashion.

But never mind what a scuppernong is not. Here’s what it is: It only grows in the South. Try saying that about a blueberry. It has a high tolerance to disease, drought, and pests. Try saying that about a strawberry. It was named after the Scuppernong River, which flows right here, through Washington and Tyrrell counties, and the word itself can be traced to the Algonquian word ascopo, which means “sweet bay tree.” It is a muscadine, but a muscadine isn’t always a scuppernong. And it is recognized by the computer’s dictionary. Muscadine is not.

Then there’s the pronunciation factor. Charles Dickens wrote, “The word Papa … gives a pretty form to the lips. Papa, potatoes, poultry, prunes and prism are all very good words for the lips.” I vote that we add scuppernong to the pretty lips list.

Just don’t ask me to pick it. I’ve outgrown picking. Call me when it’s wine.