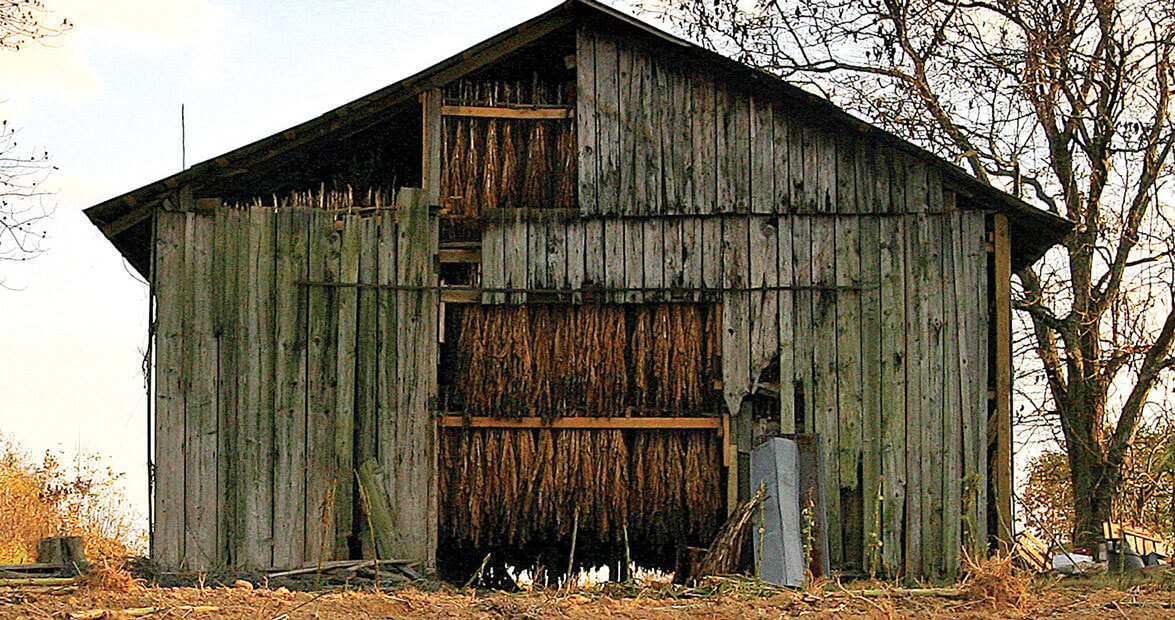 One Christmas, my Stokes County grandfather gave me two shares of R. J. Reynolds stock as a gift. I’d rather have had a Mattel Vac-U-Form. But then, four times a year, a check for $2.80 arrived with my name on it, for which I hadn’t had to feed the dog or pull weeds. Tobacco sent me free money.

I knew tobacco. On family car trips, we sang out the names of the crops we passed. Corn was the easiest, of course, and the most prevalent. Massed and low-growing dullards such as soybeans were a disappointment. But oh, tobacco, with its dramatically changing appearance: deep green in the summer with symmetrical broad, fleshy leaves; then crowned with yellow-white heads; and finally stripped and plucked in fall, with pathetically naked stalks. From the backseat I’d vainly try to fix my eyes upon a single row before it blurred and vanished, swallowed into its whole. In the middle of this vast nowhere stood a lone wooden structure — tall, gabled, unpainted, windowless, weathered, and as instantly recognizable as the crop itself: the tobacco barn. 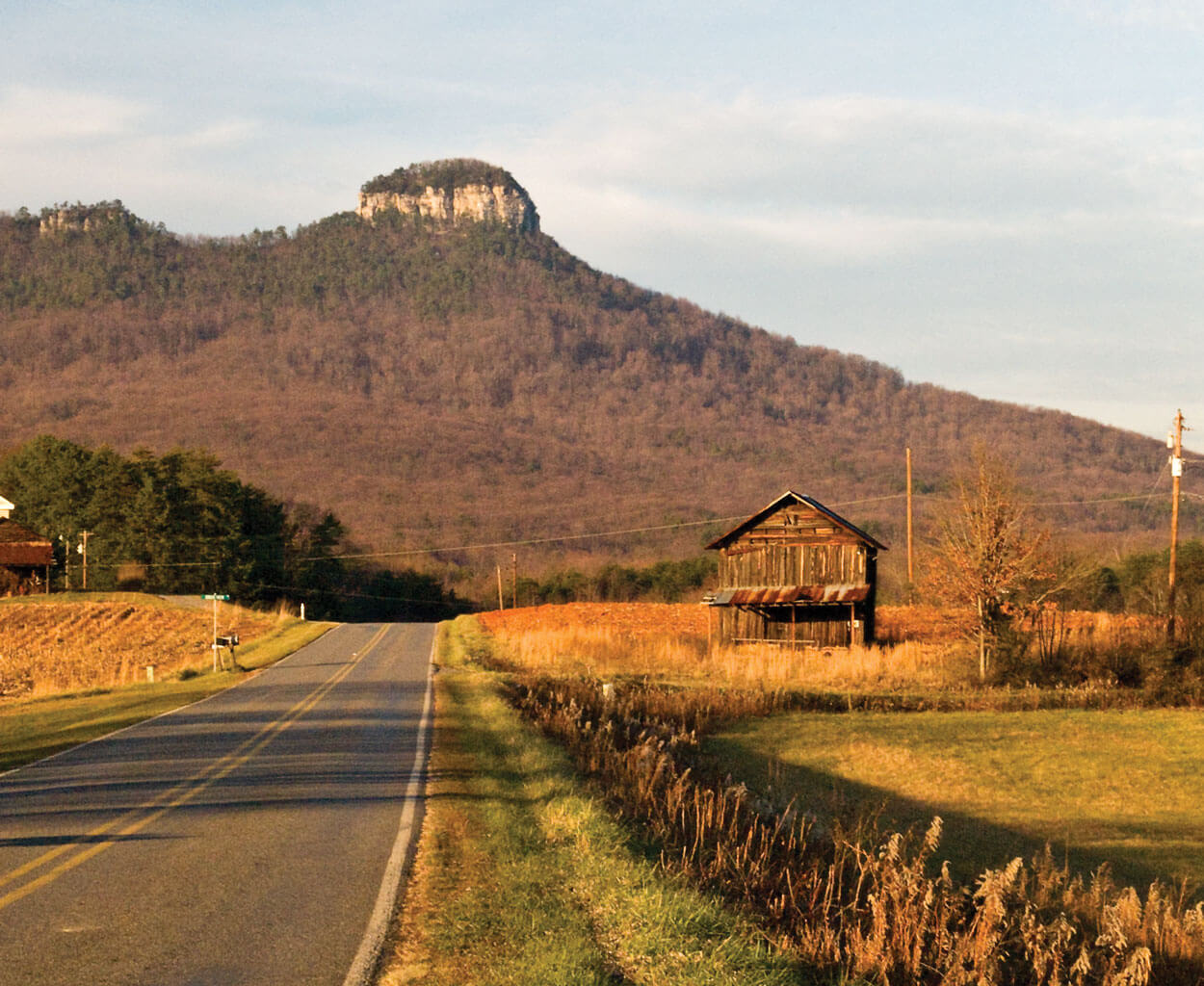 North Carolina’s foothills are home to many of the state’s remaining tobacco barns. Some are left to fend for themselves against the elements, while others are filled with tobacco every fall. photograph by Jay Sinclair

In the 1950s, half a million tobacco barns in North Carolina dotted their tobacco belts: Old Bright Belt, Middle Belt, Border Belt, New Bright Belt, and Burley Belt. Most barns were tall, plain, 20-feet-by-20-feet square buildings built of hewn logs and mortar, or sawn timber reinforced with tin. Or, “whatever the dollar would buy to get the job done,” says Bill Monk, an 86-year-old retired tobacco executive whose family business, A. C. Monk & Company, in Farmville, processed tobacco. Its evolution from family-owned to Monk-Austin to DIMON to its current incarnation as Alliance One mirrors the history of North Carolina tobacco, from family acreage to industrialized crop.

“Here in North Carolina, most tobacco barns were far and away for flue-cured tobacco,” Monk says. Flue-cured tobacco gets its name from the drying process: outside the barn, a narrow, inverted U-shaped furnace about two feet across and three feet high was fed pine logs to generate smoke. Furnace types varied depending on where the barn was located. “In the Piedmont,” Monk says, “the furnace would be built of stones. But here in the flat land, that raw material wasn’t readily available. Our furnaces were brick.”

Drawn by the chimney, indirect heat was distributed throughout the barn via ductwork that crisscrossed the dirt floor. Huge, hinged shutters on the sides or roof were opened and closed with ropes and pulleys to regulate the temperature within the barn. In just a few days, a leaf can lose 80 percent of its weight; in the first two weeks of the curing process, an acre of hanging tobacco sheds nearly five tons of water. 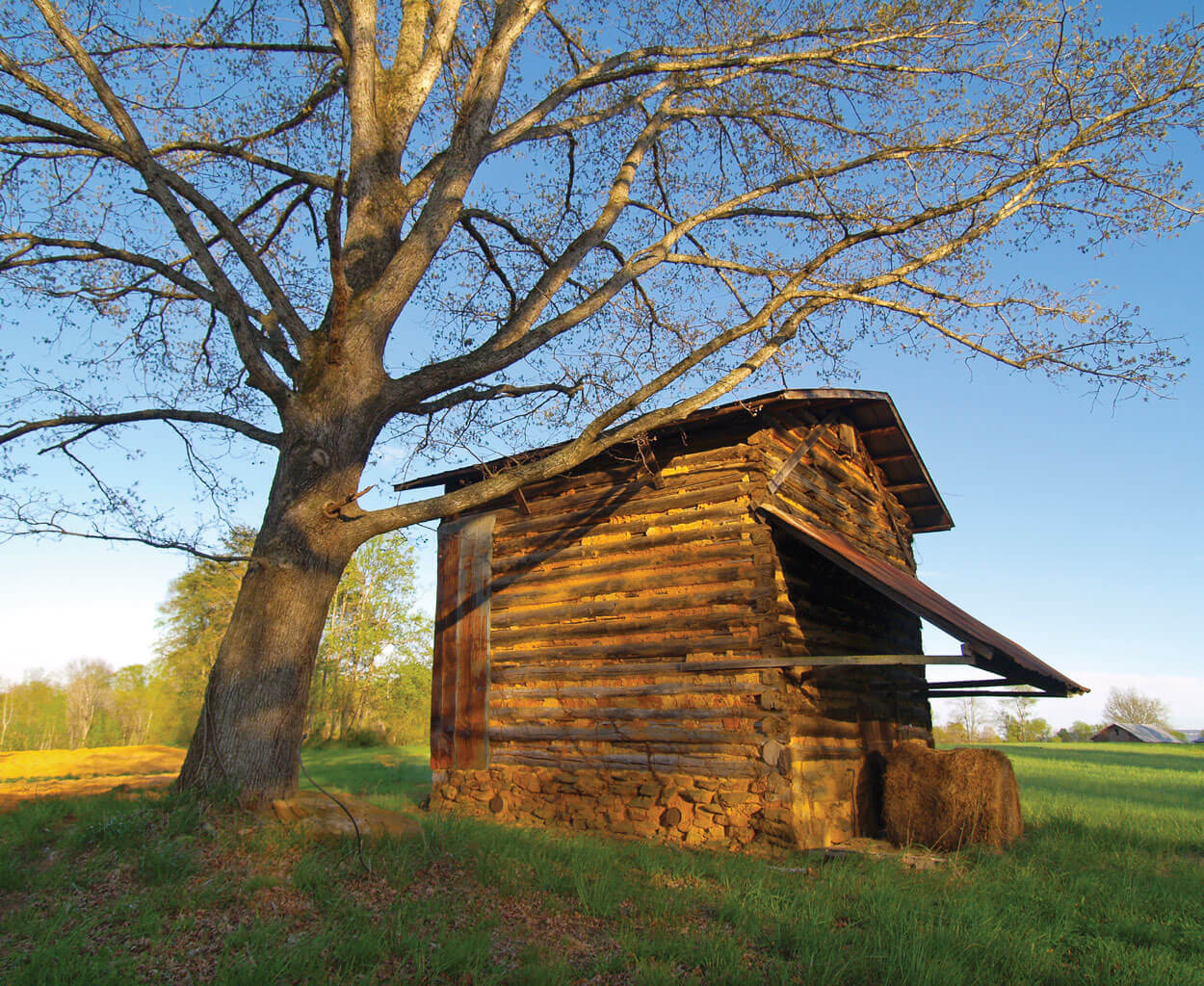 When my children were in elementary school, they were duly indoctrinated regarding the evils of smoking. Righteous and confident, they chastised their grandmother, a smoker. Smoking is unhealthy — agreed. But no North Carolinian should be unaware of tobacco’s importance to our state’s history, culture, and economics; tobacco was the golden leaf that built cities and universities and sustained thousands upon thousands of Tar Heel families. A wee bit indignant, I took their education in hand, and we embarked on a literal field trip east to Pitt County, where family in the tobacco business arranged for us to visit working fields, inspect a migrant picker’s quarters, attend a tobacco auction, and watch enormous computerized processors gently remove less-than-perfect leaves from a conveyor belt.

We crossed a barren field, trudging through furrows — once wide enough to accommodate a mule’s plodding walk as it carried a long wooden “reservoir” to hold plucked leaves — to reach an abandoned tobacco barn. Barn locations may look random, but in fact were carefully considered for efficiency, namely proximity to human labor and mule-drawn carts when the “cropping,” or harvesting, was underway. The aroma of tobacco still clung to the barn’s interior, a scent at once acrid and comforting, deeply masculine, and of the earth. Amid dust motes lit by the daylight that slanted through chinks in the walls, I tried to paint a picture: of workers, often women, standing in the open-air tying shed adjacent to the barn, pulling cotton twine from a spool to skillfully string the three aligned stems, or “hands,” of leaves to a one-inch- square, six-foot-long tobacco stick. Workers loaded the sticks on a V-shaped structure, then passed it person to person inside the barn, where someone straddled a network of parallel, horizontal rafters, or “tiers,” strategically placed so the sticks would fit between them. Hence the tall, narrow shape of the barn. One by one, the laden sticks were positioned across the tiers, leaf stems tied to the stick, leaf tips pointing downward. “Whole families were involved, including children,” Monk says, eager to indicate not only the time-consuming, labor-intensive effort of harvesting tobacco, but also the camaraderie and fellowship. When the barn was full, loaded from the ceiling to the floor, the furnace was stoked with pine logs that had been cut from elsewhere on the farm during the winter in preparation for this season. Later, fuel oil was burned in heaters inside the barns, and still later, propane. “Fire was a perpetual threat,” Monk adds. “Smoke, ashes, and cinders were present round the clock. While often built close together, the barns were deliberately located far enough apart to reduce the risk of fire.” Monk remembers well the frequent wail of sirens during curing season when these wooden barns were in constant use.

Like a chef, each farmer had his own recipe, or regimen, for curing, or “cooking off,” the moisture. “Curing is a science, an art,” Monk says, “and a good tobacco farmer would learn all the tricks to produce the finest tobacco. He wanted his tobacco to be more sought-after than his neighbor’s, and therefore get a higher price.” During the three stages of curing, about six days total, temperatures in the barn would climb steadily upward, from 120 degrees to 135 to 160, finally topping out at 180 degrees — and in the hottest part of the summer. Mercury thermometers hung in the barn and outside it, as well. Every day, touch and appearance of the hanging leaves dictated the grower’s decision as to the interior temperature. Rain, or days with high humidity, slowed the curing, and the farmer would adjust the controlled temperatures accordingly. The leaves must be dry, but still pliable; too brittle and they would shatter.

At the end of the drying process, the sticks were brought down one by one from the tiers, just as they’d gone in, untied, and loaded onto carts to be hauled to the pack house — perhaps an unused home or building on the farm — to await sale at auction. The tobacco barns would stand empty and unused — and unlovely — until the next season. Or until bulk curing and mechanization eventually rendered them obsolete. Monk says slowly, “International clients would come to visit us, to view the process, and I remember so well driving around the area. It was a sad thing to ride through the tobacco belt and see these dilapidated, deteriorating barns in the fields. The mule barns were obsolete as well, and the tying sheds. It was shameful, those sights. Yet I understood. Why would a farmer take down a barn that he had no use for anymore? That money could be better spent elsewhere.”

Could they not be utilized in some other way? I wonder, picturing myself as a Southern E. B. White, who wrote Charlotte’s Web in a bare-bones barn overlooking his farm on the Maine coast. Monk is skeptical. “Some became storage areas, perhaps for lumber. But on a large farm, you might have a dozen tobacco barns, just too many to use, even for storage. And as far as anything else, well, they’re essentially flimsy structures, with little insulation.”

O Pioneers! author Willa Cather knew a little something about standing alone in a wide stretch of land. She wrote, “I like trees because they seem more resigned to the way they have to live than other things do.” She might have included our tobacco barns in her admiration. Overgrown with kudzu, adorned with metal signs advertising Pennzoil or Esso or Nehi soda, the barns are, in essence, melancholy structures, as out of fashion as tobacco itself. One imagines them as the backdrop in a Southern Gothic tale of Flannery O’Connor’s. Lonely structures, yet possessed of an elegiac beauty, tobacco barns stand in testament to a bygone way of North Carolina life for generations. In time, they will disappear: sag, collapse, and vanish altogether. Today, a generous estimate puts the number of North Carolina tobacco barns still standing at 50,000.

In the 1960s, my mother-in-law, who would become a fierce preservationist, moved a defunct tobacco barn across a country road and onto Harnett County family property still known simply as The Farm. The barn was retrofitted with windows, baseboard heat, and a crude staircase leading to a furnished loft under the high roof, perfect for a nap or a good book. Outside, the barn’s weathered elegance is unchanged, nearly matching the gray-brown tree trunks and pine needles in which it sits near the Upper Little River. Within, its walls have seen rowdy wedding barbecues and solitary weekend getaways, children’s birthday parties where plaster-of-Paris deer tracks hardened in milk carton molds, and flannel-shirted, fried-turkey Thanksgivings as redolent with fireplace woodsmoke as it once was with drying tobacco leaves. The barn’s prosaic yet timeless architecture is a silent witness not only to history and labor, but also to laughter and love. Long may they stand.