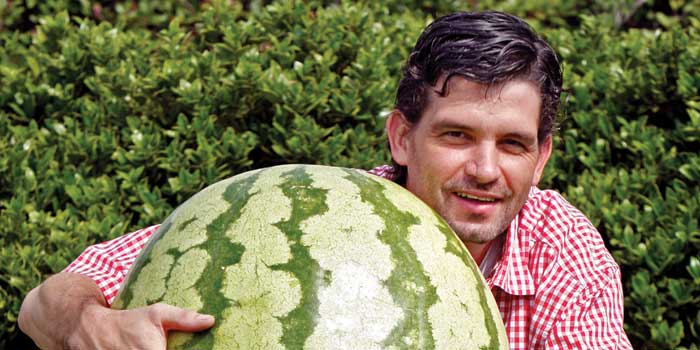 Back in March, Todd Dawson pushed six tiny watermelon seeds into Dixie-cup-size containers of dirt and tucked them into an egg incubator in
his garage.

He kept the temperature locked at 95 degrees, toasting the seeds slowly for three days. Then he transferred them upstairs to his bonus room in one-gallon pots.

In April, he dropped them into the ground — a 3,000-square-foot rectangle in the back of his Garner yard, giving each young watermelon a living room’s worth of leaf mulch and manure.

Then he stepped back and watched the fruit begin to grow, pushing toward a new world record.

“It’s kind of an addiction,” Dawson says, “trying to grow something as big as you can.”

For Dawson, gardening is no longer a backyard hobby. It’s a competitive sport to produce the biggest fruit year after year.

This season marks Dawson’s fourth attempt at daredevil horticulture. The 40-year-old got the idea while wandering through the exhibits at the North Carolina State Fair, eyeing the hog-size entries decked in ribbons.

Fruit this big doesn’t make good eating. If Dawson wants a good watermelon, he’ll go to the farmers market. By the time his 282-pounder finished up at the North Carolina State Fair last year, on the Sunday before closing, it had started to leak.

But this process isn’t about spitting seeds at a picnic or mopping juice off your face. It’s about pushing the boundaries.

By day, Dawson makes a living as an ice sculptor in Raleigh. He hand-carves elaborate fish, swans, and horse-drawn carriages for weddings, golf courses, and backyard barbecues. A former landscaper, Dawson read books and watched videos to learn the sculpting trade. But ice work gets cold, he says.

So whenever he can, Dawson spends time with his two boys in the garden on his two acres in southern Wake County. Roosters roam the yard. Antlers from his deer hunting adorn the chicken house. Dawson does a lot of different things, but his passion is growing competition-worthy melons.

In the past, successful watermelon growers kept mum, so the personal techniques remained secrets. But these days, growers share tips online.

Dawson’s favorite site has a watermelon-growing forum with more than 14,000 posts. One recommends putting coffee grounds, applied conservatively, in the soil. Another suggests the insecticide Imidacloprid as a cure for grub worms.

Every year, Dawson tinkers with his watermelon technique.

Last summer, he built the melons a bed of sand, a shade tent made of foam insulation, and a protective ring of rat traps to keep out snacking rodents.

This year, his focus is ample root space. Each of Dawson’s six plants gets 350 square feet to spread out. He trims all but one of the melons off each vine, choosing the one that looks most like a winner as a baby.

He props up the six melons on metal racks salvaged from a scrap yard, so the air circulates underneath. The electric, knee-high fence keeps out rabbits and deer. And a few pesticides protect the leaves, vine,
and fruit.

Then, just like with any other plant in any other garden, Dawson leaves the rest up to
the weather.

Todd Dawson grows a variety of watermelon called ‘Carolina Cross.’ This type of melon is known for its gigantic fruit, which has an oblong shape; light green rind; and narrow, dark green stripes. Dawson doesn’t order his seed from a catalog. He trades seeds with growers around the world to collect the best traits.

Josh Shaffer is an award-winning writer for The News & Observer in Raleigh. His most recent story for Our State was “Roadside Flowers” (April 2012).