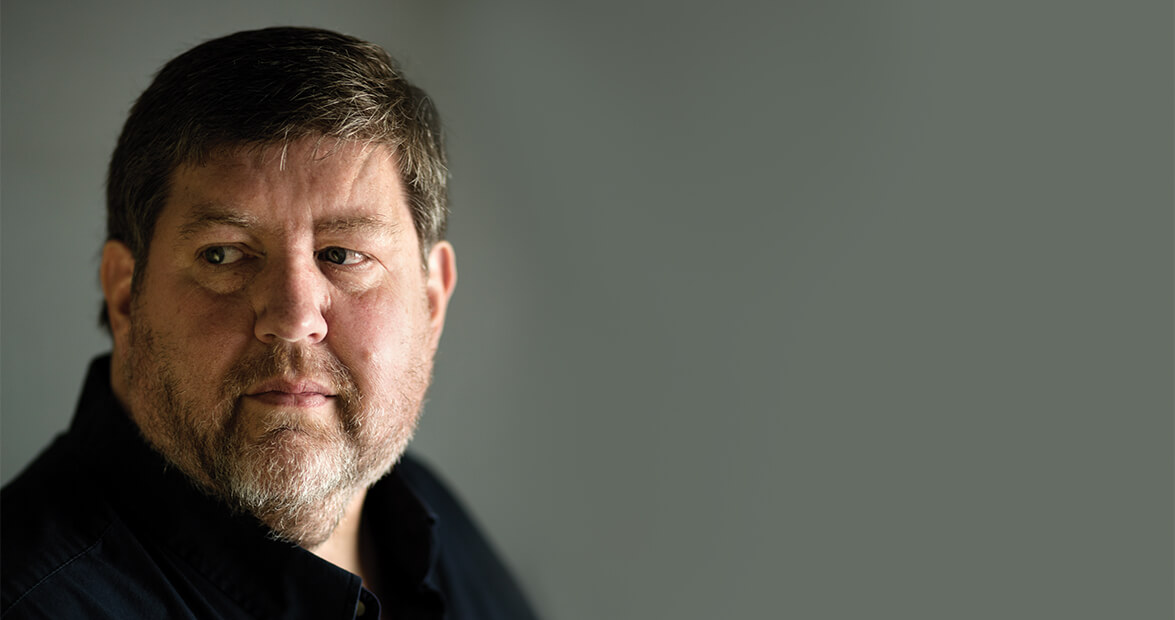 Right at the beginning of 1993, just after New Year’s, I started to lose my voice. I had just come back to The Charlotte Observer after trying, and failing, to make it as a freelancer in Atlanta. I thought my fading voice might be because of the stress of the move, or the weather, or some bug I’d caught. But it lingered. After a couple of weeks, I called the doctor. I ended up with an ear, nose, and throat specialist, Dr. Donald Kamerer, who found a polyp in my voice box. He thought it was probably nothing.

We scheduled outpatient surgery. Dr. Kamerer snipped off the growth and got a look at it up close before sending it to the lab. I’d made plans to go see family for a week or so. As my buddy Zane wheeled me out of the hospital, Dr. Kamerer said, You should come back sooner rather than later.

A few days after that, in a cold examining room on a cold winter day, he told me that I had throat cancer.

Who gets throat cancer? Heavy smokers, mostly. Alcoholics. People over the age of 55. My parents smoked, but I quit after trying two Kools when I was 12. I had a drink now and then, but that was it. And I had just turned 29.

Dr. Kamerer said that for every disease, there are all these causes they put into categories, and then there’s a category they call Other. I was Other.

He drew a picture of my voice box. Looking from above, it’s sort of a triangle. He drew a line across one of the corners, marking off about 40 percent of the triangle, and said, That’s where the cancer is. This section will have to come out. I could’ve tried radiation treatments instead, but they weren’t as effective in a case like this. Surgery was the only sure way to remove all the cancer. But he would have to sew my voice box into a different shape, smaller than before. He warned me that, when it was over, he couldn’t promise I would be able to talk.

I wondered about the prospects for a reporter who couldn’t talk.

He warned me that, when it was over, he couldn’t promise I would be able to talk. I wondered about the prospects for a reporter who couldn’t talk.

It was then that I started to spend a lot of time thinking about voice — not just the physical voice, where that comes from and how it works — but the voice of words on a page. We like to talk about a writer’s voice, which means style, but not just style. Most of us read with our ears as much as our eyes. A writer’s voice is how we hear the characters talking to us, and the narrator guiding us through the story. You could give 10 writers the same set of facts, and each one would make it sound different. Writers’ voices, I’ve come to believe, are a blend of where we come from, where we’ve been, and what’s happened to us along the way.

My voice depended a lot on the people I talked to. I’d been a newspaper reporter my whole career, which wasn’t long at that point — only seven years. Back then, I didn’t write many essays. Instead, I made a living by finding other people’s stories and getting them to open up and talk. Sometimes it was straightforward: I asked questions, the other person answered. Other times, the better times, the story revealed itself during a conversation. Then, I didn’t even wonder about how losing the ability to talk would hurt my chances to make friends or find someone to love. Those things were too big to think about. All I could think of was how there was no good way I could do my job.

The surgery was at Carolinas Medical Center in Charlotte. I woke up with a long slash across the left side of my neck, held shut by staples. I breathed through a hole in my throat, ate through a feeding tube in my nose, and spoke through a notepad. I wrote notes to the doctors and notes to the nurses and notes to my mama, who came up from Georgia to watch over me. Sometimes we’d get crossways, or she wouldn’t understand what I was trying to say, and I’d fling my pen on the floor. It was so much harder to have a conversation when you couldn’t shape it on the fly. If we got tired of each other, she’d go downstairs for a while — she’d made friends with the other folks in the smoking area. My friends at the paper bought me a Game Boy, and I played Tetris until I saw falling blocks in my dreams.

My throat slowly healed. One day, a nurse came in and plucked out all 20-some staples, dropping each one with a ping in a kidney-shaped pan. I stared out the window on sleepless nights, and spent 15 days in the hospital not knowing if I’d ever talk again.

On the 16th day, Dr. Kamerer came in and took off the bandages. Try, he said. My mama was in there, and a couple of friends, and a few of the nurses. I had a million things to say, but all I could think of was one word. “Hey,” I said, the single greatest word of my life.

After five years, if my kind of cancer doesn’t come back, it’s not going to. It’s been 22 years since that winter. I don’t think much about the cancer itself. It sounds weird to hear somebody say “cancer survivor” and think, yeah, that’s me. But I’ve still got the long scar under my beard. And I’ve still got this raspy voice. Two or three times a week, at church or the store or just on the street, I’ll meet somebody new and they’ll ask if I have a cold. Nope, I say. This is my voice. Sometimes I explain why. Sometimes I don’t.

I miss my old voice. It had more range, more volume, more depth, more of a Southern accent. I miss going to a party and being able to talk above the white noise. I miss reaching for a falsetto as I sing along with Prince on the radio.

I wouldn’t in any way call cancer a blessing. But it did change my reporting style for the better. I couldn’t stand in a scrum of reporters and shout questions anymore. I couldn’t holler across the table at a bar. I had to get up close to talk to people. The conversations were more intimate. Mostly what I ended up doing was listening. The less I talked while I was reporting a story, the better the story turned out. And I found out that being the Other — the guy who stands off to the side, the quiet one you don’t really notice — had become an advantage.

The cancer, the recovery, and all those years after have become part of my voice, too.

Part of why I write, I think, is that writing has always felt like my best voice. I’m a better storyteller when I can write it out than when I’m sitting around a table. We all have our best voice somewhere, expressed in different ways. It could be a film or a song, the stitch of a quilt, or the curve of a chair. It could be the way we treat people or the way we help them. It doesn’t have to be words.

I didn’t know that back then, when I was so worried about losing my voice. I’m grateful every day that I can still talk. If I couldn’t, I’d miss it deeply. But I’d find another way to speak. No matter what life puts in the way, sooner or later, your real voice comes out.