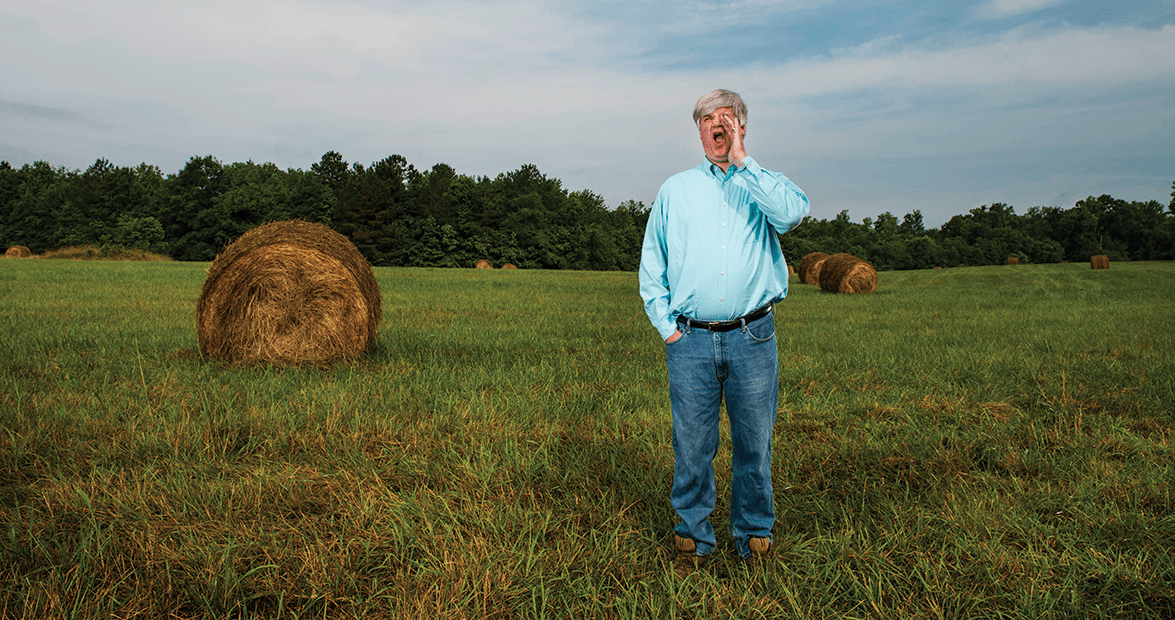 Editor’s note: This story was originally published in September 2015.

Tony Peacock stands at the edge of a quiet patch of woods near his home in the Silk Hope community and draws a long, deep breath. Lungs full, he grins — he grins a lot — then starts to holler.

Tony’s voice sounds like a yodel riding a freight train. Starting with a low sound that rumbles out of his broad chest, he slides up a scale using octave breaks. When he’s finished, a riot goes up in the trees with birds calling, and dogs answering from across the fields. “This is a good time of the evening to holler,” Tony says. “You can hear it bouncing around the trees and echoing.” Then he grins again.

“You wouldn’t believe it now, but as a young child, people talked about how quiet I was.”

Tony is a six-time champion of the National Hollerin’ Contest in Spivey’s Corner. Having first winning in 1999, he repeated as champion in 2006, 2010, 2012, 2013, and 2014. Sitting at his kitchen table, Tony says, almost sheepishly,“You wouldn’t believe it now, but as a young child, people talked about how quiet I was.”

You can tell by the trophies and plaques that fill his office that it didn’t take Tony long to find his voice, both as a hollerer and as a writer. He’s shared the sounds of hollerin’ on The Late Show With David Letterman; as the narrator of Hollerin’, a documentary about the National Hollerin’ Contest; and in interviews on radio stations around the world. As a visiting artist in North Carolina classrooms, he uses hollerin’ as a way to break the ice with fourth graders as he works with them to find their own voices as writers.

Sheila Frye, herself a nine-time Women’s Hollerin’ Contest champion, has known Tony since the fourth grade. They grew up together  in the Sampson County farming community of Clement. “There were only 36 people in our graduating class, so of course we were all like family,” she says.

After Sheila started hollerin’ in 2002, she joined Tony in hollerin’ demonstrations. “We would try to holler together as much as possible,” she says. “We hollered at schools where Tony was teaching, and at nursing homes and senior centers, where older people would always come up and say that it reminded them of growing up.”

Tony’s family farm is almost within shouting distance of Spivey’s Corner. He remembers fishing with his father as a youngster along the banks of the South River in Sampson County and hearing a holler booming over the water.  “As soon as we got there, my dad said, ‘That’s Leonard Emanuel,’ ” one of the early winners of the Hollerin’ Contest. The holler made a strong impression on Tony. “I never forgot it,” he says.

To an untrained, or unfamiliar, ear, hollers may sound similar or even random, but they’re not. “Morning hollers were communicative hollers, and would go all around the woods,” Tony says. “People could holler to a neighbor, and he would holler back. They had courting hollers. Sometimes, if someone was courting a girl, you might hear a tune being hollered, and they’d say, ‘That’s John going over to see Christine.’ With distress hollers, you might recognize the voice, but that was more of a specific sound for someone in trouble — you didn’t have a 911 to dial for help.”

Other hollers were used almost daily, such as calling for water out in the field, or animal calls. “Hogs and cattle knew their owner’s call, and they would come running. Then there were expressive hollers that might have been used at the end of the day, just to say, ‘This is the way I express my feelings when the work is done,’ ” Tony says.

“So much of what we call folk heritage is rooted in the necessities of life,” says Wayne Martin, executive director of the North Carolina Arts Council. “The wonder is that some North Carolinians, in particular those who have an artistic and creative impulse, took something that is utilitarian, and made it more than practical. They made it uplifting.”

• • •
Celebrating and preserving the voice of rural North Carolina — and likely the prospect of a little friendly competition — led to the creation of the National Hollerin’ Contest in 1969. “The founder of the contest, Ermon Godwin, recognized that it was an echo going through the countryside that was being lost,” Tony says.

The contest was held every June for more than 40 years. Last year, it moved to September to become the centerpiece of the Hollerin’ Heritage Festival.

“I tell people, what I love about the contest, and being involved in it, is that it celebrates a part of our past that I admire,” Tony says. “If you’re greeting your neighbor, and you’re feeling lonesome and isolated, you know that your neighbor is calling out to you, and you’re calling back.”

Hollerin’ Heritage Festival Committee Chair Aaron Jackson says that the contest has also created a sense of community pride in little Spivey’s Corner (population 302), and he credits Tony’s passion for the tradition for helping make the festival a success. “Tony is always willing to promote the art and the event, and I think it’s because he respects it so much. He is probably one of only a few people left who has actually heard hollerin’ in its true form, outside of the contest, and I think he takes its preservation very seriously.”

Since moving away from his boyhood home, Tony has lived in many parts of North Carolina. He says that although some things in the state have changed, there is still a recognizable North Carolina voice. “I think if you are willing to go out and look and listen, you still see a lot of what is precious and rewarding about North Carolina. The Hollerin’ Contest reminds us of that.”