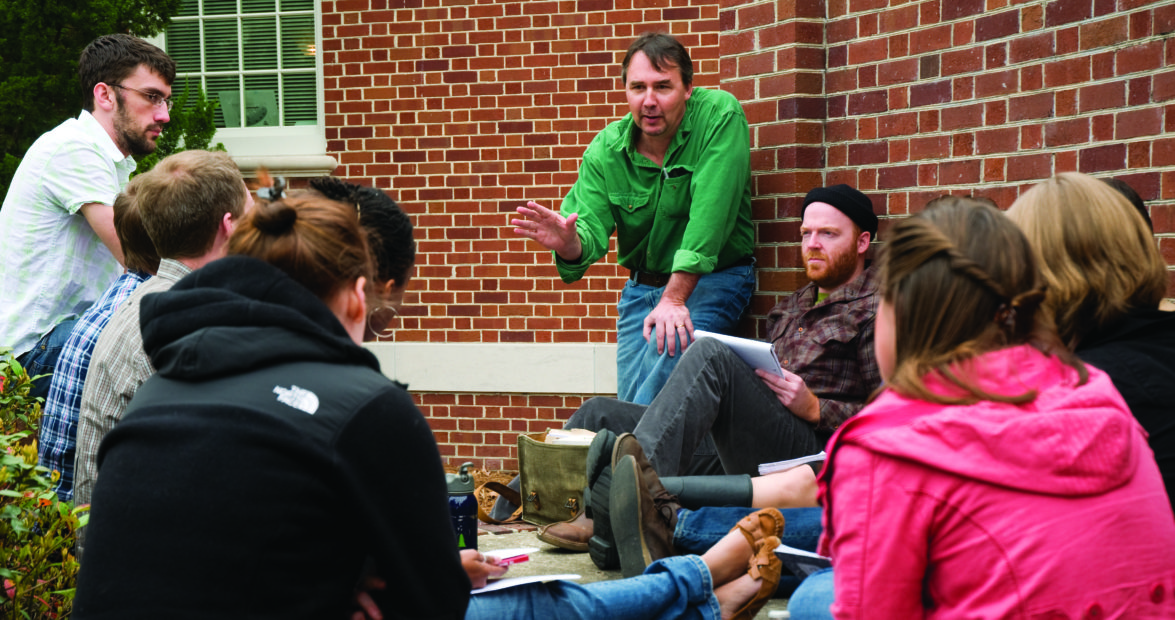 Jason Mott stands alone at a dark brown lectern in an eggshell white room and begins to speak.

His voice is relaxed and low. He speaks deliberately, looking up at his audience only during intentional pauses in the sentences.

“Tonight, it has been 10 years since we last saw each other, even longer since that night,” he begins.

Mott is one of only a few students who have graduated with a bachelor of fine arts as well as a master of fine arts in creative writing at the University of North Carolina at Wilmington.

On this night, he returns to the school’s uniform red brick buildings not as a student, but as an accomplished writer sharing one of his poems. Mott, who earned his bachelor’s in fiction in 2006 and master’s in poetry in 2008, is a nominee for the 2009 Pushcart Prize, honoring the best work in small presses each year, for his work “Thinly Veiled, The Young Man Comes to Me Seeking a Friendly Face.” He also has been a finalist for the annual poetry award by Main Street Rag, a Charlotte independent publisher that just released his collection We Call This Thing Between Us Love.

In 2007, The Atlantic named it one of the top five Innovative/Unique Programs in the United States. The national magazine highlighted some of the innovative teaching techniques used by the faculty. And it mentioned UNCW’s annual Writers Week, during which distinguished authors teach and give talks to students and the community; keynote speakers have included Pulitzer Prize-winning poet Yusef Komunyakaa and Allan Gurganus, whose short stories have appeared in the O. Henry Prize Collection.

“Writers like that inspire and can change lives,” says Department Chair Dr. Philip Gerard, as he sits comfortably in his small office, neat piles of books and papers surrounding him. “But it’s not just the sort of star power. They have to uphold and reinforce the values we’re trying to instill. … I think our strength is people really believe, fundamentally, in certain principles.”

The values, he says, include the belief that life experiences make writing possible and that each teacher should also be an active writer. Associate professor Wendy Brenner won the Flannery O’Connor Award for her short fiction work “Large Animals in Everyday Life.” Professor Clyde Edgerton is a prolific writer whose works include The Bible Salesman and The Floatplane Notebooks. And associate professor David Gessner’s book Return of the Osprey was chosen by the Boston Globe as one of the top 10 nonfiction books of the year.

At most schools, creative writing programs evolve almost organically. Here, all the elements that make up this “dream program” — the inspiring visiting writers, the award-winning professors, and the out-of-the-box teaching styles — were intentional moves. “We very deliberately created the writing program that we wanted,” Gerard says.

For several years, UNCW’s English professors thought about what they wanted and then mapped out how to get there. They thought back to their own lives as writing students: What didn’t we get that we should have? They looked at demographics and numbers. But, mostly, Gerard says, “A lot of this comes from our students who came up and said, ‘Hey, why don’t we do this?’”

The department’s home, Kenan Hall, was remodeled in 2007 to bring the entire program under one roof. Rows of new computers sit in some rooms. Cubicles for one-on-one-interaction fill other rooms. A central courtyard with a landscaped garden is used in nice weather for readings or to give classes a more relaxed atmosphere.

Gerard plans to maintain that atmosphere by keeping the program at about the size it is now.

“It’s a community. Our motto is sort of, ‘If you succeed, we succeed,’” Gerard says. “There’s a lot of one-on-one work with the faculty, a lot of outside-the-classroom work.”

Getting into that community, however, isn’t easy. They don’t look just at an MFA candidate’s grades. They also look at character. “The question we always ask is, ‘What can you give to our program?’” he says.

Mott was one of the lucky ones.

“The creative writing program is wrought with instructors offering one-on-one support, unique writing exercises, and a willingness to work with ‘outside the norm’ writers,” Mott says.

After graduating, it took Mott less than a year to find a publisher for his first book of poetry. He’s had poems and short stories published in several journals. And he’s still waiting to hear if he won that Pushcart Prize.