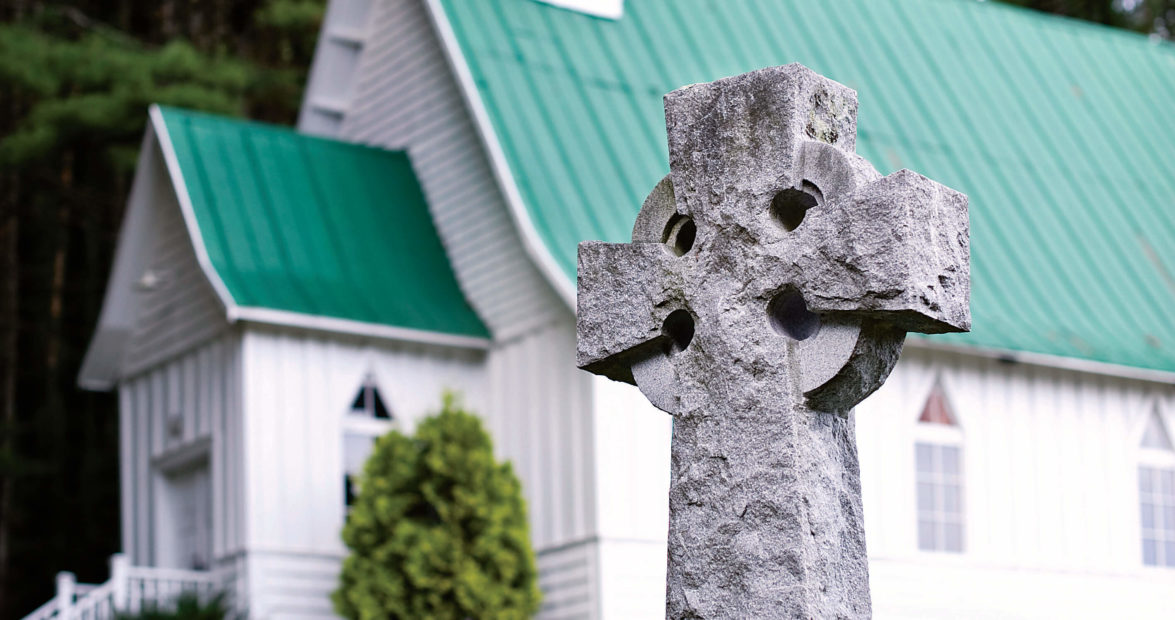 More than 170 years ago, tales of the Watauga River valley’s wild beauty compelled an Episcopal bishop to trek over rutted mountain paths to see the place for himself. Once there, Bishop Levi Ives stood atop a ridge and looked down upon three streams converging. An image of the St. Andrew’s cross filled his eyes, and the bishop christened the spot Valle Crucis, Latin for “Valley of the Cross.”

But it was more than the clear waters trickling down from the Blue Ridge peaks and the lush foliage along the riverbanks that moved the bishop to establish a mission at Valle Crucis. The kindness and forthrightness of the people who lived in the valley touched him. Upon his return to Raleigh, Ives reported to a diocesan convention on the spiritual and economic need he saw in Valle Crucis.

“My admiration was at the same time awakened by the simplicity of their character, and the deep earnestness of their petition for instruction,” he said. Soon after, Ives sent a missionary to establish a Christian community, a school, and a monastery at Valle Crucis. This was the beginning of The Church of the Holy Cross and a tradition of spirituality that continues to define the character of this unique community.

Today, no one can find the spot that inspired Ives’s vision of the cross. Floods long ago redirected the tributaries making their way to the river. Most everyone embraces the story nonetheless.

“It could be a legend,” says Dedy Traver, unofficial historian of Holy Cross Episcopal Church, which was built in 1925. “We like the legend.”

The spirit that inspired Ives’s vision, however, can be traced through the years and remains today.

The church and its Valle Crucis Conference Center share mountainside land that was part of the plot Bishop Ives purchased for the mission in the 1840s. Traver recounts the way the church’s work in the region has shaped the community as easily as if she were telling you today’s news.

The first missionary preached the Gospel and taught school in a rough-hewn log cabin. Settlers of European descent began moving to the valley in the 1700s, but when Bishop Ives arrived a century later, the place offered little in the way of civilization. A muddy path wound through the valley, and most people lived in adobes or log cabins with dirt floors. Moonshine and gambling took up almost as much time as farming.

“They needed education,” Traver says. “A lot of them didn’t even have shoes.”

After the establishment of the first mission school in the 1840s, Bishop Ives set up a monastery at Valle Crucis. The first monastery in an Anglican church since the Reformation, it raised eyebrows among Episcopalians reluctant to embrace an institution that smacked of Catholicism.

In the decade before the Civil War, a deacon named William Skiles was the link between the church and the community. The school and monastery closed by the 1850s, but Skiles stayed put and continued to minister to the valley.

“He was the little beacon of light that remained here,” Traver says.

Skiles served as a minister, doctor, and legal adviser to the people of the valley, traveling the mountain roads on a mule named Henry. People came to rely on him and the church for education and spiritual guidance. Skiles led efforts to build St. John’s Episcopal Church, which was consecrated in 1862 and still stands as one of the iconic spiritual symbols in North Carolina.

Sadly, Skiles died the same year St. John’s was completed, and the church community declined. But in the mid-1890s, the Episcopal Church revived its interest in the area. The diocese built another mission school, which included a farm and eventually a hydroelectric plant, one of the first in the region. The complex served for decades as the center of education, enterprise, and entertainment for Valle Crucis. The church owned a dairy herd, a chicken house, a mill, and an apple orchard that bore a million white blossoms in the spring.

The enterprise put residents to work turning milk into cheese and ice cream, packing apples to ship from the railroad depot at Banner Elk, building wagons, and by the 1920s, generating hydroelectric power for neighbors. A cross festooned with light bulbs glowed atop one of the compound buildings, announcing the presence of the Lord and electricity at the mission school and farm.

‘Central to their lives’

Ernestine Townsend Glover grew up in Banner Elk and attended Holy Cross. She moved back home several years ago and is the fourth generation of her family to attend the church. Holy Cross inspired deep devotion for the Townsends.

“I think about it a lot because so many of my relatives have been members there,” Glover says. “It was the central part of their lives, Holy Cross. Other than family, the church was their second love.”

Glover’s aunt attended the Valle Crucis school in the 1930s, after the church turned it into a boarding school for girls. The school attracted students from throughout the South and as far away as Connecticut and Missouri. The headmistress, Emily Toll Hopkins, was a Wellesley graduate, and the school advertised in Vogue.

People far beyond Appalachia sought Valle Crucis out, and Valle Crucis welcomed them. Ida O’Keeffe, painter and sister of Georgia, taught at the school in the 1930s. The interests and passions of the students and teachers helped expose the residents to a range of cultural ideas.

“You had teachers and students from all over the East Coast,” says Tom Eshelman, executive director of the Valle Crucis Conference Center and member of Holy Cross. “They had to have an influence. It gave people a window into the outside world that a lot of mountain folks never got.”

Glover recalls her aunt’s memories of traveling to Europe as a nanny for a family who had asked the school’s principal for a reliable girl. “So, the principal recommended her, and they hired her,” Glover says of her aunt. “She had never been out of Watauga or Avery county.”

The experience so affected her aunt that she named one of her children Wayne, after the boy she cared for on that trip.

Floyd Townsend, Glover’s cousin, attended Holy Cross as a child growing up in the 1950s, after the mission school had closed. The valley and the church were sparsely populated in those days, and Sunday services would draw fewer than a dozen people. They wouldn’t bother with trying to warm up the cold stone sanctuary on winter mornings but met in a small back room, Townsend recalls. Money was so scarce that members took turns cleaning the church instead of hiring a housekeeper. But no one ever thought of disbanding Holy Cross. The parishioners realized they had a legacy to continue.

Today, the congregation of Holy Cross numbers in the hundreds. And their dedication to the Christian ideal of selfless service, of deeds not just words, continues to permeate the spirit of Holy Cross and Valle Crucis.

Folks around Valle Crucis know Dedy Traver as “the jelly lady,” for the booth she mans at the Valle Country Fair, an annual church bazaar that she helped start more than 30 years ago. Holy Cross members work all year to organize the fair, held the third Saturday in October.

They prepare jams and jellies to sell. They fill their freezers with applesauce that volunteers turn into apple butter through long hours of simmering in copper cauldrons. They press apples into cider to serve with the barbecue. They organize and delegate and do lots of heavy lifting.

The centerpiece of the fair, which draws crowds of 10,000 or more to the meadow at the conference center, is a juried arts and crafts show featuring nearly 140 vendors; all items must be handmade and high quality.

“The day of the fair, we have so many wonderful people who come and buy everything and support it,” Traver says. “I think the reason people support it is because they know it goes back to help people in the community.”

Vendors even donate 10 percent of their proceeds back to the fair, which has raised as much as $60,000 in a single year. And every dime goes to local outreach, not to the church.

On a summer Sunday morning, voices rising on the strains of an acoustic guitar soar out of St. John’s open windows and into the adjoining meadow. Although Holy Cross has been the main sanctuary since the early 1900s, church members refurbished the aging original church during the past decade. They now hold regular services there each summer.

A variety of worshippers attend, Eshelman says. Some people are visting from other denominations; some are in town for the season or the weekend. They are drawn to the little white chapel with its green roof and stained-glass windows and its sense of belonging to another time.

“You just really can feel history when you walk on those boards and sit in those pews and look at that ceiling and those walls,” he says. “It’s very spiritual to me. I just can never go in there without it taking my breath away.”

Eshelman came to Valle Crucis 14 years ago to lead the conference center. He believes God led him here, giving him the opportunity to combine his experience managing hotels with work that holds spiritual meaning. The conference center inhabits the buildings and grounds of the former school and farm complex. Today, church groups and nonprofit organizations come from throughout the country for meetings and retreats. Families gather here for reunions.

A popular spot at the center is a deep back porch furnished with wooden rocking chairs that affords a beautiful view of the hills and trees stretching toward the Watauga River. It is among Traver’s favorite places.

“When you stand up there on the hill and look out over the valley, it’s very peaceful,” she says. “It’s very hard to explain.”

From there, it’s easy to imagine the view that struck Bishop Ives, and feel the spirit that continues to move in Valle Crucis.