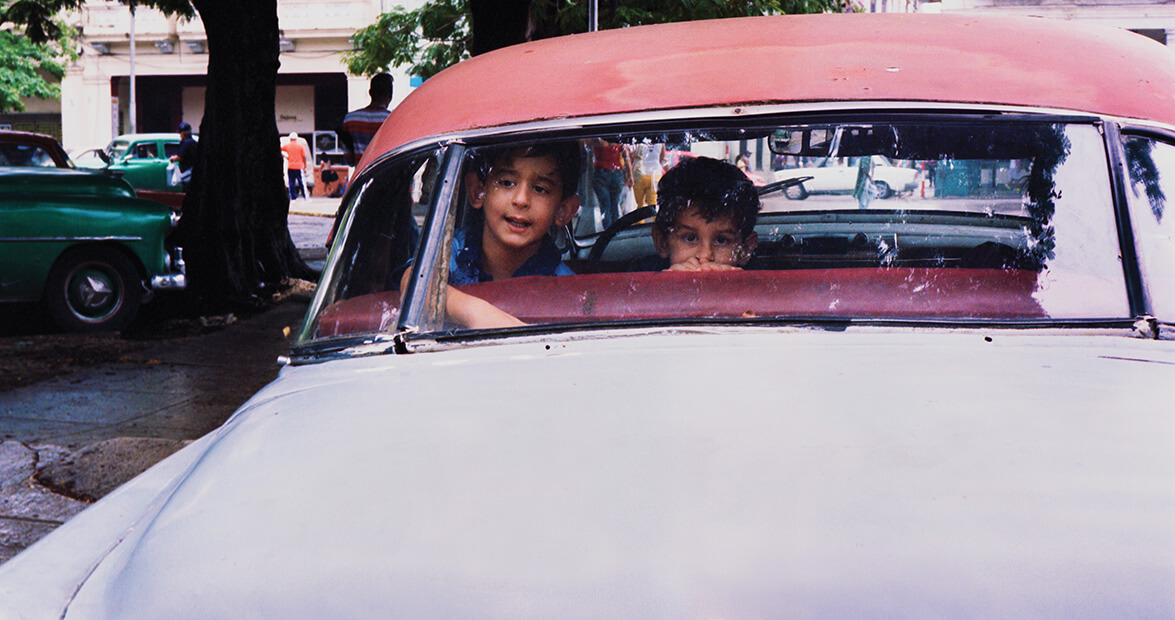 They were called car trips then, not road trips, and my family took a lot of them. For vacations, holidays, a stock car race, or steeplechase, with my sister and me in the backseat, elbowing each other about who was hogging the meager AC output from the single center vent on the dash.

Car trips had specific landmarks, old friends you hadn’t glimpsed since the summer before, or the last time you’d traveled that road. Seeing the sloping field of thrift, a cloud bank of pale lavender froth on the way to Morganton, was both a comfort and an expectation, as if, like Brigadoon, the pumpkin patch on the way to Lake Lure, dotted every fall with hundreds of orange orbs, might have vanished in my absence. Ditto for the concrete statuary emporium: half-naked ladies, Indians in headdresses, deer and eagles, birdbaths and baskets. Or the Last Chance Bar squatting mere feet from our dry county’s border, where in the ravine beside the cinder-block building tumbled a silver avalanche of discarded beer cans.

Even stops for gas were a form of ritual, made at the same service stations every trip, because they were service stations then, not gas stations, with concrete floors and few or no vending machines, whose metal pull knobs might or might not deliver. The Catch-22 of a store-bought snack loomed fresh with every journey: I could have one thing. A Popsicle, perhaps, which warranted leaning over and into the deep, ice-encrusted cabinet of a freezer that somehow always smelled like the color blue, and the ice cream wrappers crackled when you touched them. Or I could have a drink and a pack of Nabs, but not apiece; my sister had to share. Except that my sister wouldn’t drink carbonated drinks (“It burns my tongue.”). Not for her a Coke or the pale yellow citrus of an Orange Crush. No, she insisted on a Tru-Ade, a non-carbonated beverage as fiercely orange as Mercurochrome. We divided a pack of equally orange Nabs — me trying to stuff down my allotted three before my mother asked for one and reduced my share — from a counter glass jar big enough to fit over my head, and I felt smug because I knew that the name Nabs came from Nabisco. Other people might say cheese crackers, but I said Nabs because my father had told me so, and he knew everything.

“See that man?” he’d say, pointing to someone as I hovered nearby, inhaling the divinely acrid aroma of gasoline.  “He’s been drunk at least once in his life.”

“How do you know?” I’d ask, enthralled even by the word “drunk.”

“Tattoo,” he answered, inclining his head toward the man’s bicep, and I was left to draw my own conclusions.

On car trips, my father knew everything: how to signal the oncoming truckers, drawing a circle with his index finger in a form of acknowledgment. I watched, rapt, as far up in the cab, they returned his signal, whooshing past so swiftly our chassis rattled. Then, a fist pump was a request for a blast from the trucker’s horn, and when the driver obliged, everyone in the car applauded. Other times I watched with anxiety, for these were two-lane roads, and passing was a regular practice — and regular hazard. As the distance narrowed between an oncoming vehicle and us, the dotted white lines diminishing in nanoseconds, a thrumming fear accelerated my heartbeat as hard and fast as the roaring engine in the guts of our speeding car — would we make it? Yet I knew, too, in that same heart, that all would be well. This was my father driving. He was in control. His only form of car trip torture was purposely slowing down over bridges as we held our breath and gestured frantically for him to speed up. Then we could go back to sitting behind him, using his ears as a steering wheel.

If a car trip required a meal, we “pulled off.” (One also “pulled off” for imminent bathroom and vomit emergencies.) “Let’s look for a picnic spot,” my mother would say, her cheerful attitude doing nothing to assuage my humiliation of eating homemade sandwiches on the side of the road at random picnic tables surrounded by bare dirt smoothed by the feet of multiple previous picnickers. I die a little death every time the photograph of my boyfriend eating a packed lunch with my parents on a grassy swath just off the Blue Ridge Parkway comes up on the digital frame. He married me anyway.

A car trip offered the opportunity, the brief thrill, to see “in person” what I’d had access to previously only through a book description or television depiction. The curiosity of a cattail, the velvety brown hot-dog- shaped heads swaying atop stalks in a swampy roadside gully. A pigsty, Charlotte’s Web come to life, and a scarecrow, complete with a belt in his jeans. A chain gang wielding scythes and rakes, while nearby, a uniformed guard stood, a shotgun casually slung over his shoulder. All the things I didn’t know. Eloise lived in a hotel, a far cry from the flat-top motels we passed, door after door facing an asphalt courtyard. What was the difference? Why could we never reach the wavering, mesmerizing mirror just — just! —  ahead on the highway, that tantalizingly silver pool of mirage? At a produce stand, a relentlessly bobbing duck had been dunking into a cup of water beside the cashbox for so long that its bill was slimed with algae. Farm girls no older than I moved languidly among the vegetable bins, restocking, or ringing up purchases. All the things I didn’t know.

We played car games to cover the miles: cow poker, which inevitably resulted in sulks when your competitor gleefully, heartlessly, wiped out a 50-mile tally with a single innocent country church, and car bingo, when you prayed that your card, pulled from the glove compartment, didn’t feature a crosswalk or lamppost or some other icon of city life that we weren’t likely to come across.

I can’t recall the exact car trip when it happened, where we were coming from. I know only that we were on our way home. It was a Sunday afternoon, and the holiday, or visit, or vacation, was over. Forever after, on every car trip, I searched for this landmark: a steep red-clay hill perhaps 15 feet high on either side of the car, impossible to see over, the road like a riverbed below it. We’d pulled over — been forced to pull over — on the side of the road, at a dead stop, to wait. A wreck, maybe.

My father had gotten out of the car, telling us in no uncertain terms to stay put. Finally, he returned. A child had died. Had run down the hill, playing, someone in pursuit, perhaps, and onto the highway, and had been struck by a car, and killed.

At some point we inched our way forward, where there was nothing to be seen of the tragedy but its aftermath. I remember no policemen, no emergency vehicles.  Only milling, stricken adults — women in aprons clutching skinny arms, men in overalls; the deep, dried gullies carved vertically in the red-clay ravine; the utter silence inside our car as we passed them, an offer of stunned, respectful, communal grief. That car trip, if not the precise location, is fixed in my memory. It was the moment I knew I was fortunate.

My grown sons have their own car trip landmarks: J. R. Moore & Sons, a general store in Gulf that sells all things Carhartt. The life-size, rearing fake horse and tepee proclaiming the location of the Hattadare Indian Nation in Bunnlevel, where for years they begged to stop. The boys weren’t squabbling over who hogged the AC; it had long since died. Instead, they squabbled over who had to sit closest to the dog and suffer the gluey drip of his drool on their necks and arms and shoulders.