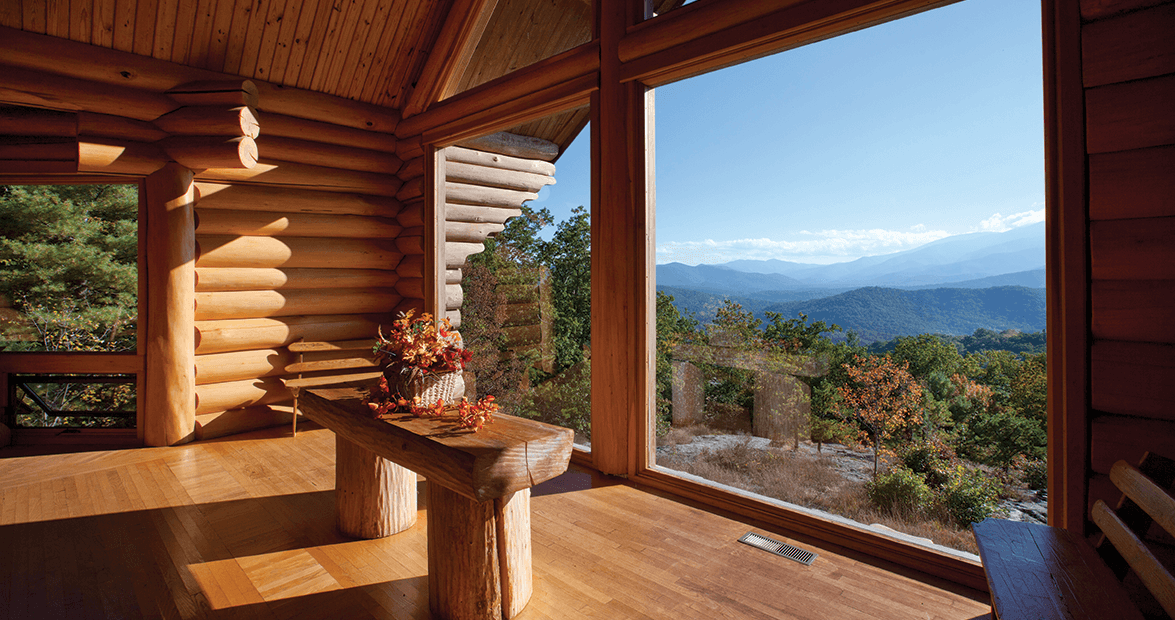 The vision behind Quiet Reflections Retreat was to build a place where people could get closer to God. It feels like you can almost see him from here.

You don’t stumble across this place. You turn off U.S. Highway 19 East between Spruce Pine and Burnsville onto one back road, then another, then another. Then a gravel road twists for a mile and a half up the side of a ridge. Your Honda Accord probably won’t make it. But if you get to the top …

Here is a small, stunning chapel built from poplar and glass. The pews are split logs. The view opens onto a clearing at 3,500 feet and spreads across the Black Mountains, reaching all the way to Mount Mitchell off to the left. Look through the windows behind the pulpit and you can’t see a single thing man has built.

I am up here, all alone.

A few minutes ago, Guenther Penner said goodbye and headed for his house down the hill. Guenther and his wife, Trixanna, built Quiet Reflections from 250 acres of woods and rock. For 25 years visitors have come to escape highway noise and artificial light and the constant chatter of our wired world.

This place came to Guenther in a vision. He and Trixanna spent years chasing it. But all I want, right now, is one quiet night.

I sit in the chapel and watch the daylight dim. A single star lights up the purple sky. The cicadas start their call-and-response, like inhaling and exhaling. It reminds me of meditation. Breathe in. Breathe out. Listen for your inner voice.

That’s what the Penners did. That’s how they came to build this place.

It happened in 1983, maybe early ’84, down in Florida. Guenther and Trixanna had been married since ’71 and had two daughters. Guenther had a business fixing X-ray machines. They owned a house in Boca Raton and a cabin in Little Switzerland. Trixanna grew up in Gastonia and missed the North Carolina mountains. Maybe, they thought, they’d retire up there.

The Penners loved their church in Florida. But Guenther struggled with his faith. He didn’t feel the deep connection with God that other people talked about. He studied and prayed but could not close the distance.

One morning he put on some coffee and went out to the back porch. This is what he says happened next.

“I saw this place. It just appeared in front of me, almost like a sphere. I saw myself in there. I looked older, but I had that peace I’d always been looking for. Somehow I knew it was 250 acres. I could smell the woods. There was a building, and I couldn’t really see it, except when you opened the doors, there was a whoosh onto this beautiful view. I asked God, ‘How do you get me from here to there?’ I heard his voice inside. He said, ‘Just watch.’ ”

Guenther told Trixanna. They weren’t sure what to do. He had always been more of a dreamer. She is more tethered. But Trixanna saw how this dream stuck with him, even though he was afraid of it. Two years went by. They were up in the cabin in Little Switzerland, watching baby birds leave a nest. All but one had made it to the trees. The last bird hung on the edge of the nest, terrified to fly. Guenther saw himself.

I think we should do this, Guenther said.

Guenther sold his business, and they got ready to leave Boca Raton. They intended to move into the cabin in Little Switzerland, but they couldn’t get power to it, so they bought a place in Spruce Pine. But Guenther wasn’t sure the place in his vision was in North Carolina. He traveled the country looking for the right spot. He also told people around town. One day in the summer of 1988, he mentioned his vision to a woman at the bank. One of her relatives was part of a group that owned a piece of land on Seven Mile Ridge. He gave the Penners a call.

At first, Guenther turned him down because the tract was 370 acres, and Guenther’s vision said 250. But they decided to look anyway. There was no gravel road then. They hiked up the ridge. By the top, they were exhausted. But then they reached a clearing.

And there it was. He saw where the doors would open with a whoosh onto the view. Five years after Guenther had his vision, he found the place that matched it.

Guenther and Trixanna laugh a lot when they describe how Quiet Reflections was built. God or luck, their journey hit every single green light.

The landowners let them carve out exactly 250 acres.

Armin Wessel, a man they knew as the song leader at a Christian retreat in Florida, turned out to be a high-end architect. He designed the chapel and brought a model up to the mountain so they could look through the tiny doors and think of the whoosh of the view.

Guenther wrote a letter to a famous log-home builder named B. Allan Mackie, hoping to take one of his classes. Mackie’s wife saw the letter and persuaded her husband to fly down from Canada to Burnsville. He stayed 10 days, and by the time he left, the walls of the chapel were partway up.

A sawmill operator took a one-year sabbatical with his wife and two kids to help out and stayed four years. Another friend donated $50,000. Volunteers showed up without being asked. With all that help, the Penners built the chapel and a welcome center. They then turned a shed that was built as a rain shelter into a little guest cabin and added a retreat house, where the Penners live and host visitors in guest bedrooms.

Quiet Reflections isn’t for workshops or picnics. There are Bibles in the chapel, but no hymnals. The chapel door is never locked — it’s held shut by a chunk of log.

The retreat has had thousands of visitors over 25 years. But it’s a place meant for a few people at a time. Sometimes only one.

I spend the night in the cabin. There’s a guest book on the desk in the living room. A man named Andy wrote:

I am moving back to Chicago, IL at the end of April. This time is etched in my mind and will be a reminder of what God has made when I am surrounded by steel and concrete again.

I go to sleep and wake up to light coming through the curtains. It must be dawn. I stumble out onto the porch. I can see the trees and the path to the chapel, but the light looks pale and strange. I check the clock on my phone. It’s 4 in the morning. The light is from the moon.
I had forgotten what moonlight looks like, all by itself.

Officially, Quiet Reflections is for sale — the chapel, the cabin, the house, almost 400 acres (they ended up buying the extra 120 after all). Unofficially, the Penners aren’t sure. He’s 68 now, and she’s 67, and they worry they can’t keep the place up much longer. But they don’t want the retreat to turn into a resort for weddings or some gated community. They want buyers who will stick to Guenther’s vision.

The Penners are in no great hurry, though. They’re still a little astonished that all this worked out. They give full credit to God. After all, he gave Guenther the vision. But to receive a vision is one thing. For the Penners to act on it, to take the big risk, to see it through all the way to the end, together: That’s faith. Not just faith in God. Faith in each other.

The power of faith. That’s the kind of thing you think about, up on the quiet mountain, all by yourself in the moonlight.