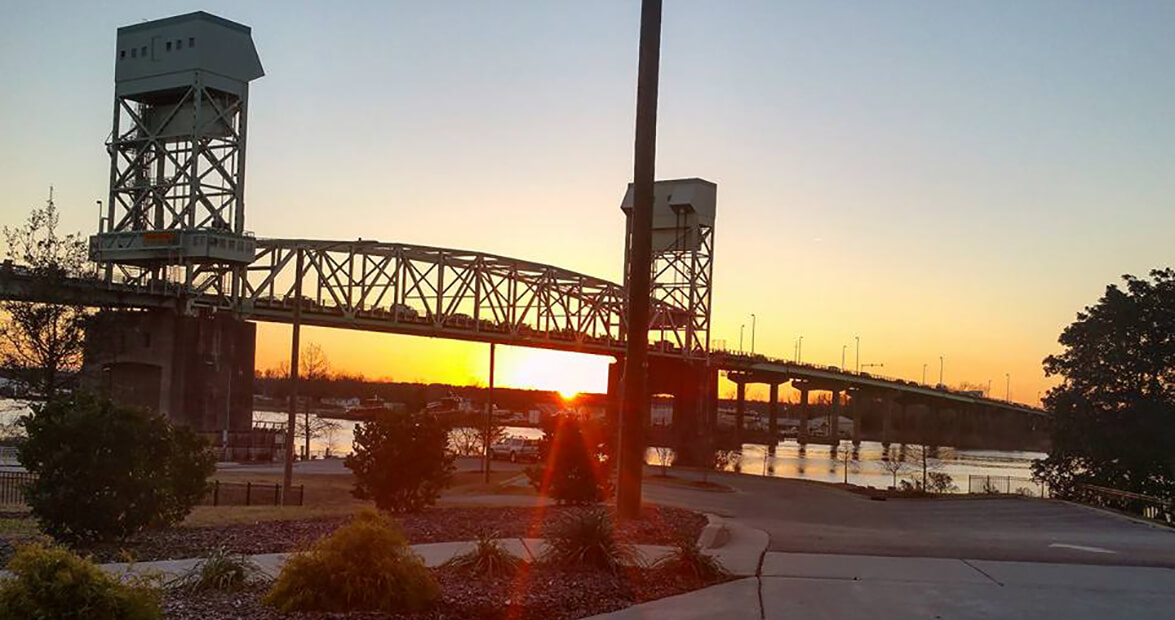 Waterline Brewing Company • Wilmington
Waterline Brewing Company is a block away from the Cape Fear River, in the shadow of the towering Cape Fear Memorial Bridge, and occupies the historic Old Jacobi Hardware warehouse. The massive taproom showcases the historical integrity of the building, including exposed brick and rough-hewn wood beams. Outside of the taproom, the beer garden has clear views of the river. You’ll find rotating food trucks on weekends, yoga on Sundays, and the occasional Human Foosball game midweek. Wander two blocks down the street to Dram Tree Park, which has a floating dock and boat launch. Bring your own kayak and spend some time on the river before or after your visit. If you’re lucky, you’ll be able to watch the Cape Fear River Rowing Club speed by.

Mill Whistle Brewing • Beaufort
There’s small, and then there’s Mill Whistle Brewing, which is a nano-brewery producing just one barrel of beer at a time — that’s just 31 gallons. The small batches allow the brewmaster and owner to focus on quality and experiment with a variety of styles from American wild ales to Vienna lagers. On Friday and Saturdays, the brewery sounds its namesake, the old Safrit Lumber Mill whistle, letting the town know the bar is open. Mill Whistle has a small taproom in the seaport town of Beaufort, one of the most historic towns along the Crystal Coast. It’s only a couple of blocks from Taylor Creek and the Rachel Carson Reserve. Bring your own boat or catch a ferry out to Shackleford Banks where you can explore the island and its famous wild horses.

Lost Colony Brewery • Manteo
Lost Colony Brewery is a small, two-barrel brewery operating inside Full Moon Café, located on Mateo’s waterfront in the middle of Roanoke Island. It focuses on Irish and English style beers (malty brown ales and mellow English style IPAs), while the café has incredible seafood with a Southern flair. Grab a spot on the patio with a full view of Shallowbag Bay and Roanoke Island Festival Park. If you’re feeling adventurous, Kitty Hawk Kites offers kayak tours around the island.

Haw River Farmhouse Ales • Saxapahaw
Haw River Farmhouse Ales took “local and sustainable” to heart by renovating a 3,000-square-foot historic cotton mill in the heart of small town Saxapahaw and turning it into one of the most sustainable, fiercely local breweries in the state. The 10-barrel brewery focuses on Belgian style beers with a soft spot for ingredients culled from local farms. The brewery overlooks the Haw River — take a stroll down the slope and follow a trail along the banks. Just upstream you’ll find a canoe livery with canoe and kayak rentals.

New Belgium Brewing Company • Asheville
Colorado’s New Belgium Brewing Company opened its East Coast production brewery in Asheville to much fanfare in 2016. Take advantage of the brewery tour — which includes a really big slide — then spend some time in their world-class tasting room, the Liquid Center, featuring more than 30 taps. Food trucks show up on a regular basis, there’s always cornhole on the grassy lawn in front of the Liquid Center, and there’s a massive deck overlooking the French Broad River. Grab a pint of one of the taproom-only beers and watch tubers float by on the water below.

Outer Banks Brewing Station • Kill Devil Hills
Outer Banks Brewing Station is grounded in coastal culture. The building itself was constructed to look like one of the historic life-saving stations that once kept a watchful eye over the beaches nearby. The brewery is big on easy-drinking, summer friendly options like wheat ales. The interior is stunning, with massive tapestries hanging from the second story. The large lawn outside is complete with a pirate ship playhouse for the kids. Even cooler: The brewery is wind-powered, taking advantage of those strong ocean breezes. You’re just a few blocks from the beach and the Outer Bank’s legendary surf.

Good Hops Brewing • Carolina Beach
Good Hops Brewing is right in the middle of Pleasure Island, roughly half way between the Cape Fear River and the Atlantic Ocean. They brew easy-drinking, English-style ales influenced by the surf and sand that’s just beyond their door. The brewery has a breezy, bright-colored taproom and a beer garden that comes complete with a nine-hole disc golf course covering four acres of adjacent land. Stop by for a pint or two of their flagships (the amber is super popular). Take Harper Avenue several blocks east to Carolina Beach’s famous Boardwalk, or head west to Carolina Beach State Park on the Cape Fear River side of the peninsula. There, you’ll find all kinds of fishing and boating, as well as one of the world’s most unique plants, the Venus Fly Trap.