There’s a reason why the search for life on other planets begins with water. Here on Earth, there are anaerobic bacteria that can survive without oxygen, entire deep-sea-dwelling ecosystems that can thrive without sunlight. But no living thing that has ever been discovered can live without water. Water, it seems, is the key to life.

At Frog Level Brewing Company, on the banks of Richland Creek in Waynesville, brewmaster Matthew Norman begins brewing his imperial stout by adding hot water and grains to a 31-gallon steel tank. The water awakens dormant enzymes in the grains that break down starches into sugar, which will later be turned into alcohol. As the hot water mixes with the roasted malts, scents of caramel, toffee, and chocolate fill the brewing room. 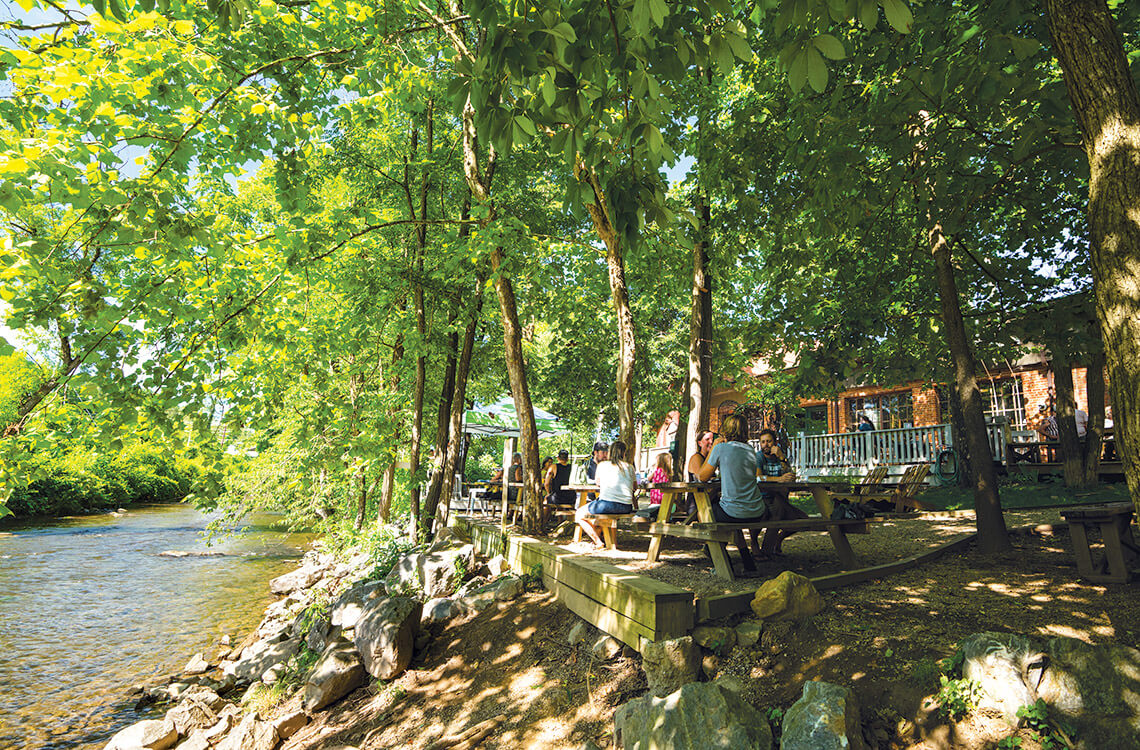 At Frog Level Brewing, customers can enjoy a beer while watching Richland Creek as it flows by. photograph by Derek Diluzio

Many breweries treat their water using a reverse-osmosis process to remove contaminants and ions, then add desired ions back in. But water from the Town of Waynesville is so clean that Norman doesn’t have to remove anything; all he does to his water before brewing is add ions. The brewery saves money and valuable floor space by not having extra equipment to clean their water. “If you’re in a region where your water is not as good, you need to use reverse osmosis to get it to a clean slate,” he says. “The water here is so good that it basically is a clean slate.”

About a mile down the creek, at Waynesville Soda Jerks, production employee Sasha Peterson fills a brown glass bottle with Concord grape soda. He recently moved to Waynesville from Kansas City, Missouri, where he worked at a brewery. He says that the process of making soda shares similarities with making beer, and for both, “water quality is No. 1.” 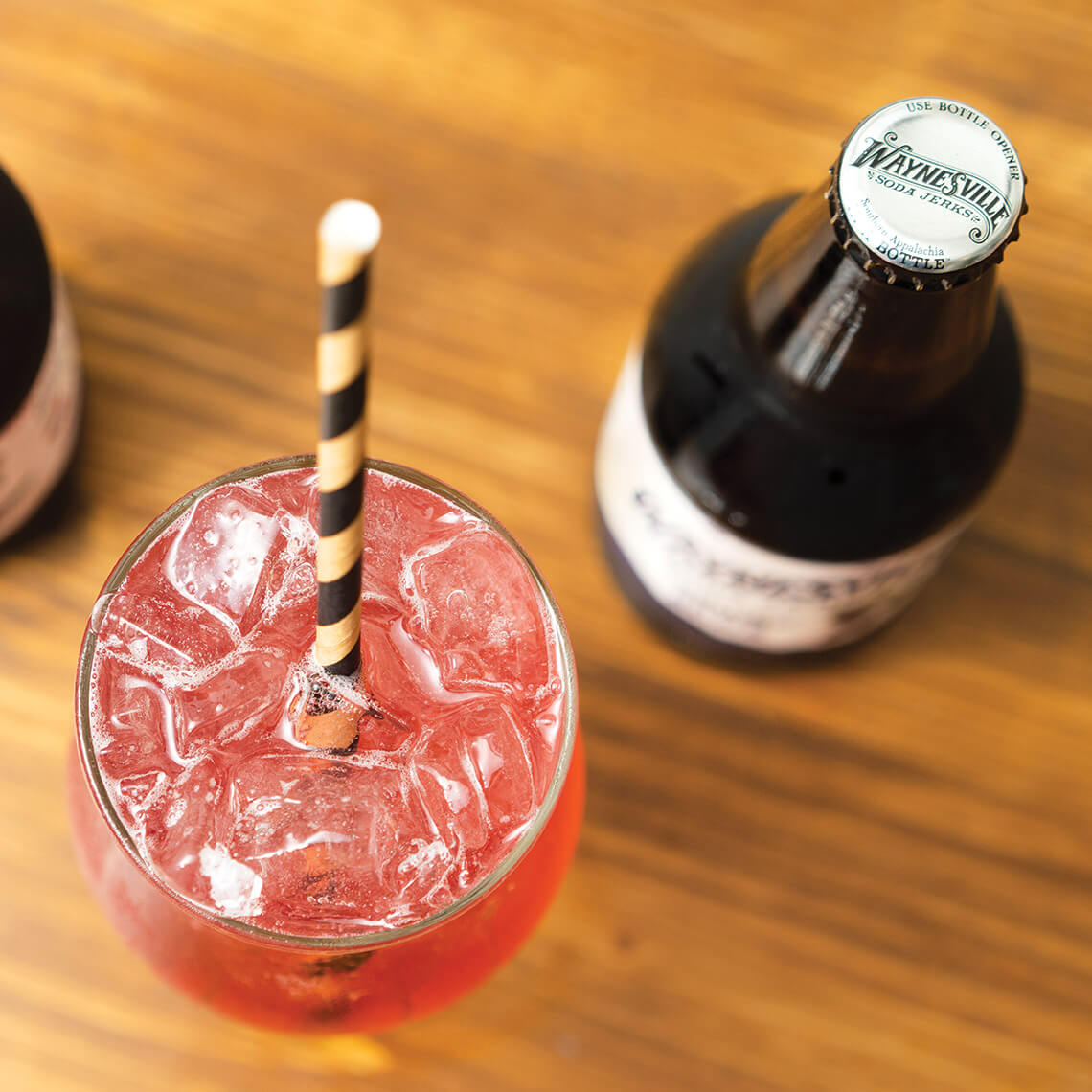 Waynesville Soda Jerks’ strawberry rhubarb soda is, like most sodas, “probably 90 to 92 percent water,” says co-owner Chris Allen. “Ideally, you want the cleanest, freshest water you can get. And we’re pretty lucky to have it here.” photograph by Derek Diluzio

“At the brewery that I used to work at in Kansas City, we slowly built our own water treatment plant,” he says, a process that included charcoal filtration and reverse osmosis. At Waynesville Soda Jerks, they use a simple filter that’s small enough to hang on a wall.

“We’re really fortunate to be [in Waynesville],” says Chris Allen, who co-owns the business with his partner, Megan Brown. “A lot of people have to sink a significant amount of funds into getting water to the point of what we can get by just turning on the tap.”

But how did the water get that way?

“This is it,” says Pete Bates, standing on top of the Allen Creek dam and looking south. Behind him, below the dam, the creek flows north, where it will join Richland Creek and continue past Waynesville, ending at Lake Junaluska. In front of him lies a reservoir and the verdant peaks that flank it. He gestures to the west, where the Blue Ridge Parkway flirts with the edge of Nantahala National Forest, and to the east, toward Pisgah National Forest. He points south, where Richland Balsam, the highest point on the parkway, rises more than 6,000 feet.

Inside these borders lies the entirety of the Waynesville Watershed, the roughly 8,000-acre tract of land that channels precipitation into five creeks that feed the reservoir. This water supplies about 17,000 customers in and around Waynesville. No surface water flows in from outside the watershed; it all originates here as rainfall. 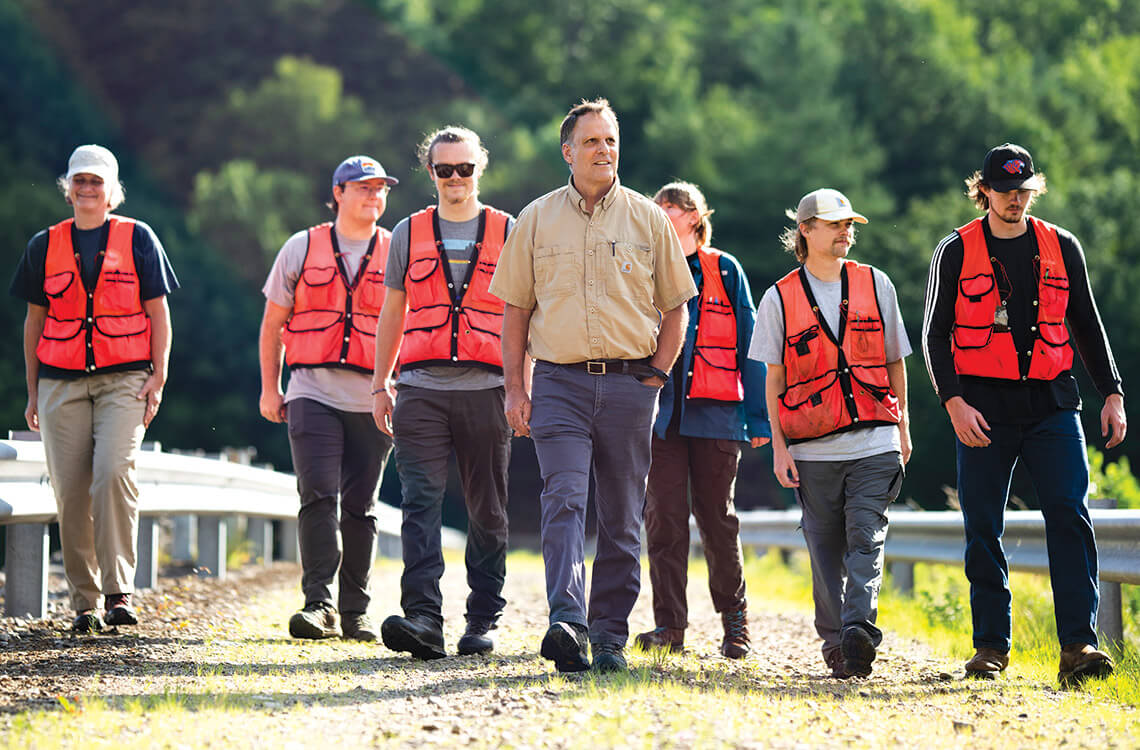 Unlike some colleges, WCU doesn’t have its own forest for students to study natural resources, so Pete Bates (center) works with students to practice forest management techniques in the Waynesville Watershed. photograph by Derek Diluzio

Bates is a professor in the Geosciences and Natural Resources Department at Western Carolina University and the president and director of Forest Stewards, a nonprofit organization that manages the forest in small areas of the watershed. In the 2000s, when the Town of Waynesville approached Forest Stewards’ predecessor, the Western Carolina Forest Sustainability Initiative (WCFSI), for guidance on protecting the watershed, Bates played a key role in helping the town decide that an actively managed forest was the best option. Today, Waynesville owns almost all of the watershed (except for a narrow strip owned by the Blue Ridge Parkway), and all of the land is protected; it can never be developed. But that wasn’t always the case.

From 1901 to 1923, the forested land was privately owned and heavily logged. After serious droughts in the 1920s threatened Waynesville’s original water supply, the town purchased about 7,300 acres of land in the watershed with plans to use it as an additional water source.

When a dam was built in the 1980s, the watershed extended into 691 privately owned acres. “Any development that might occur on those 691 acres had the potential to damage the water supply,” says Lee Galloway, Waynesville’s town manager from 1994 until 2012. So in 1994, the town began what would become a nearly decade-long process of buying those tracts of land. Waynesville purchased the acreage with the help of grant money that required the land to be placed in a “forever wild” easement, meaning that it could never be developed and the forest could never be cut or managed in any way.

The best way to protect water quality was to maintain a healthy and diverse forest.

The other 7,340 acres of the watershed — the area that the town had owned since the 1920s — remained unprotected. “In the old days, whenever the town needed money, one of their resources was to go out and do timbering on the watershed and sell the timber,” Galloway says. “And it wasn’t always done very well. A lot of times, it would just be clear-cut.”

Henry Foy, who was mayor of Waynesville from 1991 until 2007, had seen the damage that had been done by clear-cutting the timber on the watershed. Forests prevent erosion, and when those forests are cleared, silt from the land winds up in the water. Foy didn’t want that to happen again. So he and Galloway began discussions to put the remaining land under another conservation easement that would forever protect the land from clear-cutting.

This is where Bates comes in. After studying other watersheds, WCFSI shared findings that helped the town decide that the best way to protect water quality was to maintain a healthy and diverse forest within the watershed. “[The forest] filters the water,” Bates says. 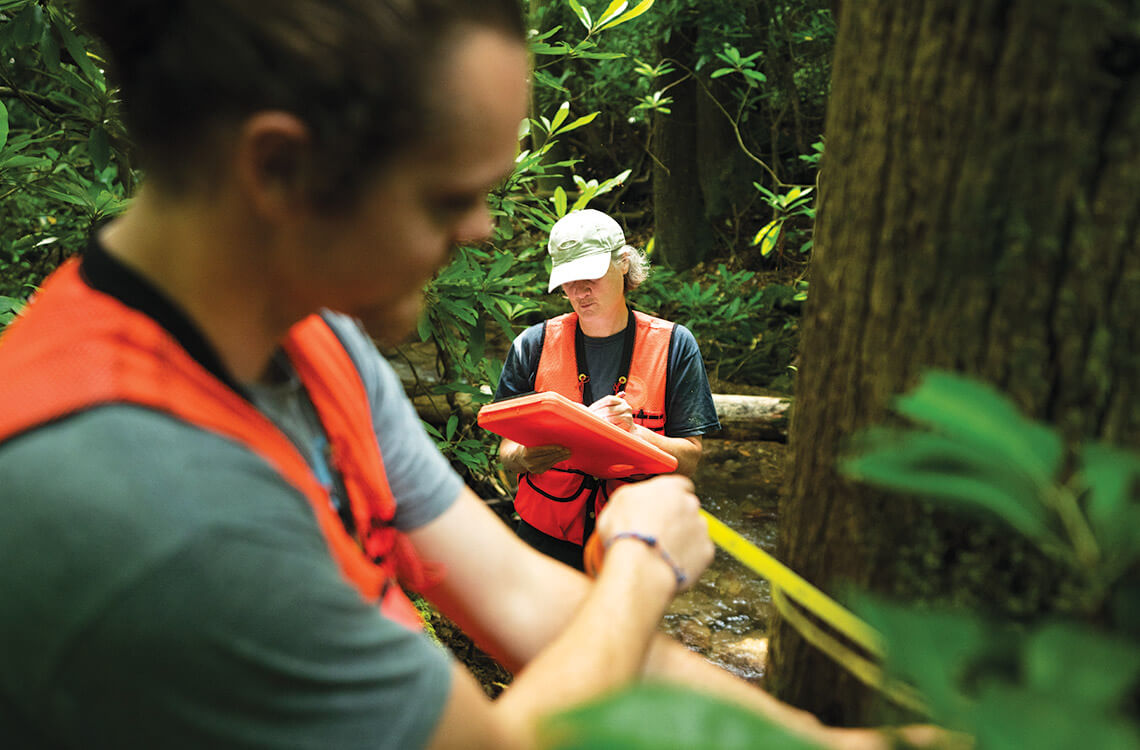 Avery Holbrook (foreground) and Sunny Himes measure the diameter of trees as part of continuous efforts to assess forest conditions in the Waynesville watershed. photograph by Derek Diluzio

Before clear-cutting, the forest was diverse in terms of age and species present. After clearcutting, the forest that grew back was more homogenous. That left it susceptible to pests and diseases, and meant that most of the trees would be reaching the ends of their lives at roughly the same time. “To just stand back and let whatever happens happen everywhere isn’t the best strategy,” Bates says. “You want to have an opportunity to try to impact things so that you maintain this healthy forest across your landscape.”

In 2005, the town put the remaining 7,340 acres into a “working forest” conservation easement, and Bates and his team at WCU began managing small areas of the forest with grant money from the Doris Duke Charitable Foundation. When the grant money ran out, Bates started Forest Stewards, an associated entity of WCU, to continue the work. The organization employs crews of students to improve forest conditions by doing things like controlling invasive species and nurturing oaks in areas where they are being out-competed by red maple and other species. Any work that they do in the watershed must be approved by the Conservation Trust for North Carolina and the Southern Appalachian Highlands Conservancy, which co-hold the conservation easement, to ensure that the work is beneficial to the health of the forest and the quality of the water.

With a light pain pattering on the windshield of his Subaru Forester, Bates navigates some of the old logging roads that wind, dip, and climb for more than 100 miles through the watershed. Coming to a stop, he nods to a stand of trees on the passenger side where he and his team did a restoration treatment in 2014 to promote species diversity. Prior to treatment, the stand was a white pine monoculture, but now Bates points out many tree species: yellow poplar, white oak, black birch.

Farther down the road, the rain stops, and Bates gets out of the car for a short hike up a forested slope. He points out a dead birch tree that has been treated to promote the growth of the oak tree beside it. “Nurture the oak — that’s a mantra we have,” he says. “We want its crown to get up there and be able to grow.” As Bates speaks, the water from the recent rainfall trickles through the plant litter beneath his feet, finding its way to tiny nooks and crannies in the soil that will channel it into one of the nearby creeks that supply the reservoir. 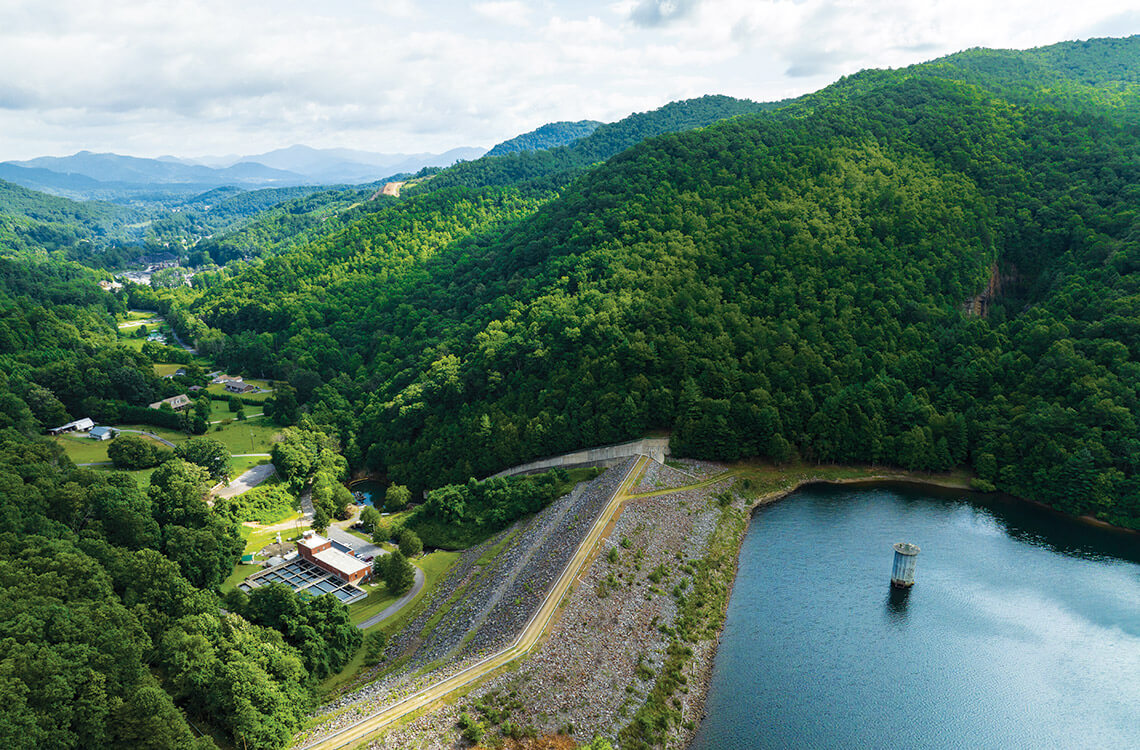 All of the water in the Waynesville Watershed begins as rainfall before being channeled into the town’s reservoir (right) and water treatment facility (bottom left). photograph by Derek Diluzio

Jerry Miller, a professor of environmental science at WCU, performs water quality monitoring in these creeks. He measures parameters like dissolved oxygen, pH, temperature, and turbidity — an indicator of suspended sediment concentrations. In the past, he used automated samplers that were supposed to be triggered during floods by a small electric current conducted through the water. But the dissolved contaminants in the water, which determine the electrical conductivity, were so low that the instruments’ triggers never activated. So Miller had to switch to a different type of device that’s triggered by water pressure.

The mineral content of the water, which also contributes to electrical conductivity, was too low to trigger Miller’s instruments, as well. Although the water does pick up minute amounts of minerals from soil and rocks as it makes its way from the forest floor to the creeks, it doesn’t have the noticeably metallic, bitter, or salty tastes that can sometimes be imparted by higher mineral concentrations. When Waynesville residents turn on the tap, they simply get the unspoiled taste of pure, clean water. And when businesses like Frog Level Brewing Company and Waynesville Soda Jerks use Waynesville’s water in their products, they’re starting from a clean slate.

After spending 40 years in local government, Galloway says that the joint effort to conserve the watershed is one of his proudest accomplishments. “It’s forever,” he says. “Whoever’s here in the future, living here and drinking water from that Waynesville water treatment plant, it’s because of the effort that went into that watershed.”