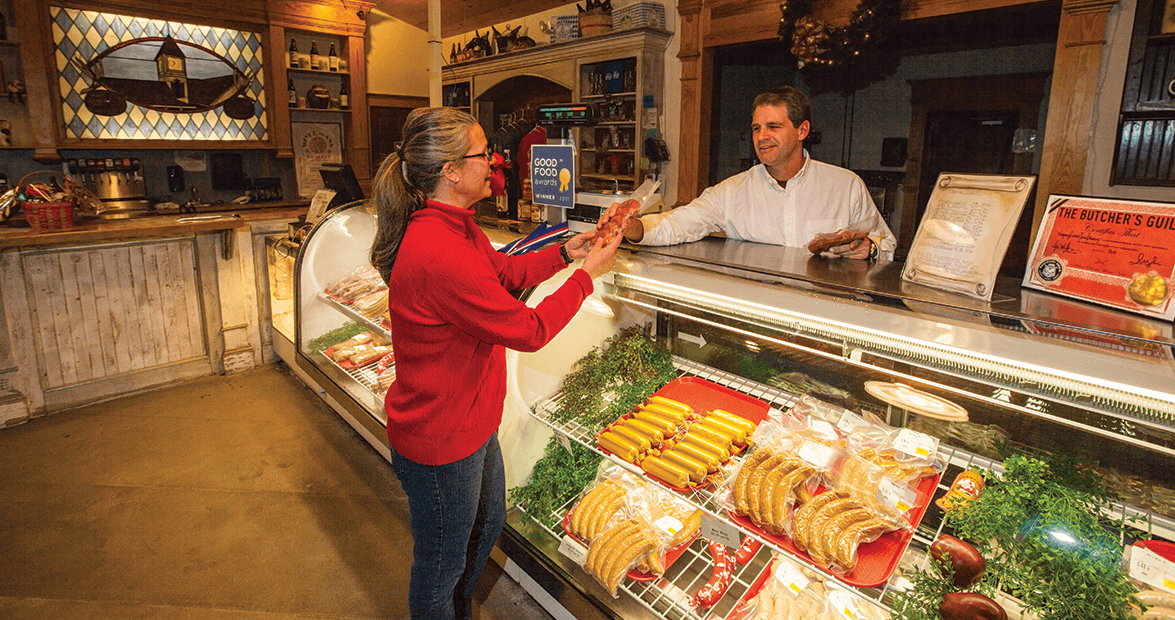 Uli Bennewitz laughs at the notion that he is a rebel and dismisses the idea of being a pioneer.

“My wife would just say I’m plain stupid,” says the man with the charming German accent who took on North Carolina law to open the state’s first brewpub in Manteo in 1986.

Eileen Bennewitz wrinkles her nose and adds, “I would say very stupid.” The two cackle in unison.

This self-deprecating humor comes from an entrepreneur who devotes considerable energy to a business that produces more pride than profit. A guy who waded waist-deep into bureaucratic red tape to serve homemade beer and bratwursts to travelers who drop by en route to the beach.

Uli founded North Carolina’s inaugural microbrewery, The Weeping Radish, named for the German pub snack that “sweats” when salted. Initially he paired his homemade brews with a Bavarian-themed restaurant in Manteo, “complete with ‘oom-pah’ music,” he says. But the restaurant flopped.

“Nobody wants to eat at a Bavarian restaurant on the Outer Banks,” Uli says with a shrug.

Instead, he closed the Manteo restaurant and added a pub, butchery (importing a German butcher from his homeland), and farm to go with the microbrewery in Grandy.

The metal barn of a building, with a graveled parking lot and a mural covering the side, is a curiosity stop on U.S. Highway 158 between the drive-through towns of Grandy and Jarvisburg. (The goats out front love to be petted, by the way.) Folks pass through, or pass by, going to the Outer Banks. If they stop, they are treated to a brew made of only hops, malt, yeast, and water — no preservatives — to wash down their sandwich of choice (the Reuben is delicious).

The sweet potato liverwurst, which earned national honors as the 2011 Good Food Awards charcuterie winner, is original and tempting. Last summer more fanfare arrived when Guy Fieri dropped in to film a segment for the Food Network show “Diners, Drive-Ins and Dives.”

The handcrafted brews are extensive enough that a popular option is ordering a flight of four-ounce samples — such as Corolla Gold, OBX Kölsch, Black Radish, and rotating seasonals — for $8. For the kids, there’s homemade root beer.

“It is definitely a destination location,” he says.

Perhaps that’s why the Weeping Radish isn’t a giant moneymaker, despite its Black Radish being touted as “one of the 50 beers to try before you die,” according to The Brew Site, a website for craft beer.

“The only time you’ll weep is when there’s none left in the fridge,” reads an online review of the foamy lager reminiscent of chocolate, caramel, and coffee.

But Uli isn’t looking to make a profit so much as a point. He pays the bills with the “day job” he’s held for 30 years — managing large-scale farming operations for foreign investors.

The idea that a small, local farm/brewery/butchery is governed by the same federal rules and regulations that oversee Anheuser-Busch and Smithfield Foods is frustrating to Uli. His litany of anecdotes about attempting to follow the rules includes a story about the Weeping Radish once being shut down for labeling meat packages on a holiday.

Uli remains true to his farm-to-fork concept of purchasing hormone-free beef and free-range pork from local farms, supervising the butchering and smoking process, and serving customers quality meat. He also runs a contract program for which he collects meat from local farmers, processes it at the Weeping Radish facility, and returns it to farmers in the form of sausages and charcuterie products with personalized labels.

Butcher Frank Meusel is the craftsman behind the butchery. He speaks only German, relying on gesticulations to communicate with English speakers. Butchering meat is his passion, not his job, Uli says. Meusel is one of the main reasons farmers seeking sausages and other charcuterie will travel as far as 300 miles. While artisan butchers are commonplace on every street corner in Meusel’s homeland near Bavaria, they are still a novelty in North Carolina.

Visitors are welcome to peek into Meusel’s butchery downstairs, where the salty aroma of the smokehouse is unmistakable.

Back in the brewpub, Uli invites questions during weekly tours he gives on Wednesdays. From a viewing platform atop the aging room, people can glimpse the imposing brewing tanks and fermenters. A step out back reveals woods as far as you can see and a grazing horse that belongs to the bookkeeper. Emma, Meusel’s hound, begs for a rub.

Uli’s vision for these 24 acres isn’t complete yet. An organic vegetable garden and a seating area where parents can talk while their kids play, another traditional German concept, are in future plans.

“More animals outside is a definite,” Uli says. “We’d like this to be a brewery with a playground, almost. Beer and family go well together.”