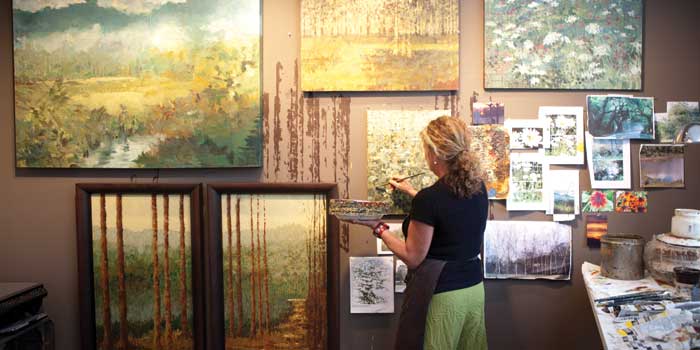 Wendy Whitson remembers trips to her great-uncle’s Winston-Salem studio nearly 50 years ago. Soft light filtered in through big windows. The smell of paint and cleaners filled her nose. Stacks of paintings leaned against the walls. And she, just a small, 4-year-old girl, watched her uncle Joe King — well known for his portraits of Queen Elizabeth and several U.S. presidents and North Carolina governors — work.

Whitson remembers those frequent visits as bright flashes in her childhood spent growing up in Whiteville. Uncle Joe was hard to forget — a fun-loving, community-minded, practical-joking man who lived gracefully with a physical disability. At age 11, he lost one of his arms in a childhood accident, but it didn’t impede his ability to paint or alter his attitude. Whitson, always surrounded by Uncle Joe’s prints, grew to love painting and drawing.

“That appreciation of fine art is something that’s been with me forever, mainly because of him,” she says. “Uncle Joe was a big influence.”

Decades later, living in Asheville, Whitson, 55, paints in her River Arts District studio with a paint-splattered apron dangling from her shoulders. Whitson and her husband converted a 1904 former tannery building into Northlight Studios, where Whitson shares space with three other artists. Inspired by those childhood memories, she’s developed into an artist known for her philanthropy and dedication to the local arts scene.

Whitson studied art at Salem College and took her friends to visit her fun-loving uncle. “He would paint and entertain us,” she says. “He was busy painting until the day he died. A lot of his work ethic is incorporated into my own. There’s a lot of us that have this history in our family, this creativity by blood.” (Whitson’s aunt and Uncle Joe’s wife, Earline King, was also a well-known artist, and 22 of her sculptures decorate her hometown of Winston-Salem.)

Whitson attended East Carolina University, where she studied graphic design and painting. But after graduation, with no idea how to make a living as an artist, she left painting behind for the next 25 years. She worked as a newspaper photographer and then as a graphic designer for an architectural firm in Atlanta, Georgia. While living in Atlanta, she developed severe asthma that sent her to the hospital six times with respiratory failure. “I would wake up and wonder, ‘Why am I still here?’ ” she says.

Unsure what would happen with her health, Whitson and her husband, John Davis, moved to western North Carolina in 1999 seeking cleaner air and a fresher environment.

And just like her uncle, Whitson persisted. Growing stronger and healthier, she rented a studio in Asheville’s River Arts District and jumped back into her art in 2002. Whitson began learning to use acrylics — because of her asthma, she could no longer use oils. She discovered how to mix color and developed a new brush technique. It took a year of experimentation. “It was terrifying,” she says. “At the same time, it was electrifying.”

At first, she hated everything she painted. But she worked at it every day — just like her uncle. She spent days driving through the countryside, roaming the mountains, and shooting photographs she later used as inspiration. Her compositions began to reflect the area’s forests and fields.

One photograph of mist floating down Mount Pisgah, prompted her In the Mist landscape, a blue, green, and rust-colored abstract that still hangs on her studio wall. “When I finished that painting, I thought, ‘OK, I’ll sign the lease another year,’ ” Whitson says. “I can’t paint fast enough now. It’s amazing.” She strives for consistency, working and reworking a painting until she finds that magic point of completion.

It started with him

Fifteen years ago, Uncle Joe died at age 84, and Earline died this year. Uncle Joe’s heavy, paint-covered easel now sits next to Whitson’s work space in her studio. A copy of his self-portrait as a young man — where he looks like a dapper Jane Austen character — hangs near her work desk, piled with tubes of acrylics and disposable plates she uses for mixing.

And just as Joe and Earline dedicated themselves to their community, so has Whitson. Joe sold more affordable versions of his work in prints and cards, so does Whitson. She serves on the board of directors for the Chamber of Commerce and donates some of her paintings to benefit organizations and area churches.

Whitson also helped shepherd the River Arts District into its current renaissance and will serve as the area association’s president next year. Since Whitson joined the association in 2002, the membership has grown from about 35 artists to 170 artists.

All of Whitson’s work, in her studio and out, pays tribute to Uncle Joe — her first inspiration. “He touched a lot of people’s lives,” Whitson says, “including mine.”

Angie Newsome, an Asheville-based journalist, is the founder and editor of Carolina Public Press.