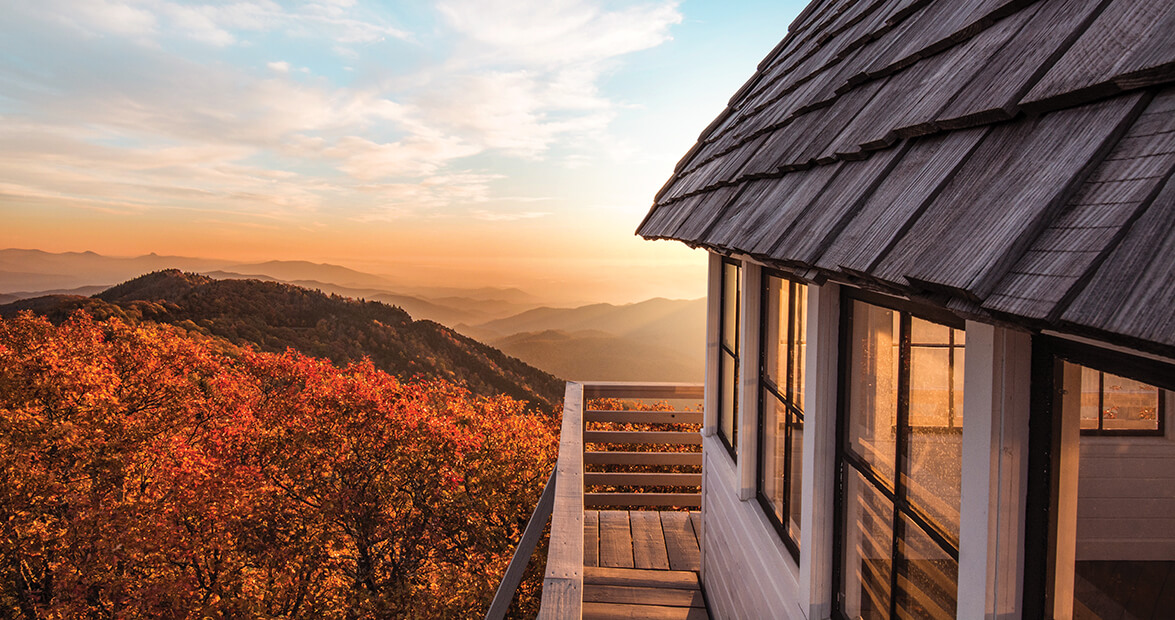 They brought along a two-foot machete — for bears, you know. Having never spent a night in the woods, Peter Barr and his buddy Brad felt they had to prepare for all possibilities. As overly confident and excessively outfitted college kids, they’d set out from Fontana Dam on a six-day hike along the Appalachian Trail. With each step up Shuckstack Mountain, their 70-pound packs clanked with the gear they’d rented from a military surplus store; their gym sneakers started rubbing blisters. The silent self-recriminations began.

At the summit, they found a good excuse to set down their packs and stretch their toes: There, a tall, rusty Tinkertoy of a fire tower, known simply as Shuckstack, cast a portentous shadow. Another hiker, having just descended steps that didn’t seem nearly sturdy enough to hold him, brushed past Peter and Brad, declaring, “I might be the last one to climb that tower before it falls down.”

How could Peter let that stand? He scooted up each wooden, partially rotten step on his rear end, bolts rattling under his shifting weight. Steel beams, blemished by decades of corrosion and graffiti, gave the tower an easy, if unsettling, sway. On one flight, the handrails were missing entirely. At 75 steps, Peter’s feet were in the trees, and above that, the physical world seemed to fall away. A few more steps brought him into the cab, where the keeper once watched for fires from an elevation of 4,000 feet. He could see blue sky through the gaping holes in the roof; underfoot, the wood was so soft his flimsy sneakers could have punched right through it. 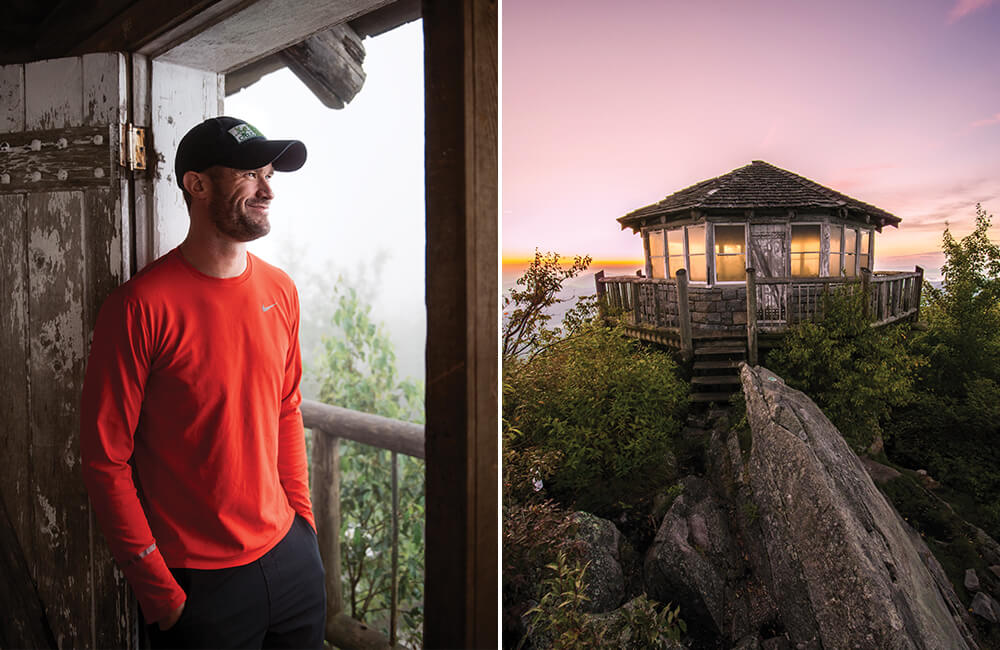 Wind rolled in and out of the empty window frames in the 7-by-7-foot room. “I looked out at the Southern Appalachians around me, at where we came from near the dam, and out over the range,” Peter says. “If I can trace one moment where my life took a new direction, that was it.”

There were bears — and wild pigs and lightning storms and memorable mountain dwellers — but those few minutes that Peter spent in Shuckstack have become the lore of his life, the story that made him. Before Shuckstack he’d planned to be a doctor, but the mountains came calling instead.

In the years following that trip, Peter’s fascination with fire towers became an avocation: He studied U.S. Geographical Survey maps to locate the North Carolina lookout sites, and then hiked to find them. About half the time, he discovered that the tower had long since been dismantled or removed. Surviving towers were often in the same sorry shape as Shuckstack. And yet, the astounding vistas these neglected structures revealed seemed to Peter reason enough to protect them.

“I realized that if these towers could become more popular and be seen as an asset to the parks and trail system, then there would be more public pressure to preserve them,” he says. Now Peter, the trails coordinator at Conserving Carolina, spends his spare time drumming up the community support, dollars, and muscle needed for restoration projects like the one completed on Shuckstack in 2014. In the process, many dog-eared, coffee-stained copies of his book, Hiking North Carolina’s Lookout Towers, have been passed among hikers, particularly those heading up Mount Cammerer or Fryingpan, where what you can see from a fire tower catwalk is the whole point.

Which is not to say that the view is all there is to these structures. Like lighthouses, lookouts have outlived their intended purpose, but that’s the source of their charm: Relics trip the imagination, spark wonder. At one time, towers dotted peaks every 12 to 20 miles or so, and the few that remain have long since been separated from their intimate histories. 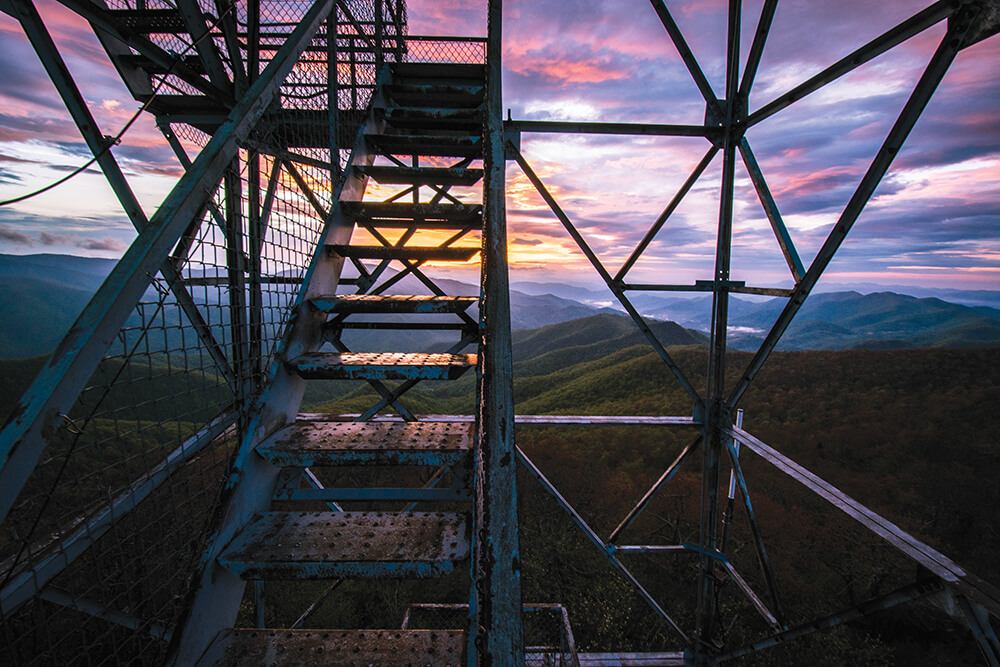 Fryingpan tower, just off the Blue Ridge Parkway near Brevard, was partially restored in 2008, and dazzles hikers with views of Cold Mountain and Pink Beds. photograph by Andy Toms

“I never met a fire tower that wasn’t worth saving,” says Keith A. Argow, chairman and CEO of the Forest Fire Lookout Association. He spent much of his forestry career managing North Carolina wilderness and the towers that protected it. The majority of the state’s 150 fire towers were built in the 1930s by the Civilian Conservation Corps, a New Deal program that employed some three million men to plant trees, clear trails, and provide the infrastructure for a growing conservation movement.

Local lookouts (the tower operators) lived in their cabs or in ground-level cottages. Ranger stations checked in with them about weather conditions, and hikers and campers were welcome to come by for a chat. Over time, the towers themselves became symbols of forestry: a helpful, watchful eye in the wilderness.

“A good lookout knew who was likely to burn their trash, and could tell a campfire from a wildfire,” Keith says. “You had to have that instinct, that alertness, that sense of knowing when something had changed in the forest or weather.” It was seasonal work, spring and fall mostly. Summer leaves, plump with chlorophyll and moisture, are about as flammable as wet sponges, and winter’s frost and snow keep fires at bay. But fall’s dry leaves are quick kindling, and spring’s gusts act like a bellows on a dry forest. In those months, rangers like Keith relied on the knowledge of their lookouts.

And those lookouts relied on Keith. He remembers heading up to Fryingpan — at 70 feet the tallest tower in the western part of the state — one night when the operator was missing his wife and wanted to go home for dinner. Keith had just settled in to scan the sweep of forest, Cold Mountain on one side and a cascade of blue hills on the other, when a call came over the radio from a lookout at another tower. “Can you smell the ramps cooking up here on Pilot Mountain?” the keeper asked. “That’s the way it was,” Keith chuckles. “We were like family.”

A bottleneck has formed on Fryingpan tower as a man from Greenville is having second thoughts about going any higher. It’s a warm Sunday afternoon, and his plaid button-down is getting damp around the collar. “I should have dressed for a hike,” he says, “but I wore my church clothes.” He was driving past Fryingpan Tunnel, saw the turnoff, and on impulse decided to stop. The mile-long hike up the dusty jeep road is a steady incline, edged with ferns, wildflowers, and looping blackberry canes — a mere nature walk. It’s the tower, the open metal scaffolding, the way it looms like a giant skeleton, the old bones of something once mighty, that draws out the sweaty palms.

A mom and a dad with a baby strapped to Dad’s chest — Asheville folks — power past the man on the third landing. The mom quickly pulls ahead as the dad lingers for the view. “He doesn’t do heights,” she whispers. The supports start to shimmy; another group is coming up. At the fifth landing, the platform narrows; the metal dents underfoot with an unnerving pop. Not yet at the top, the view is endless and everywhere — unavoidable, really. In the fall, the colors start at the crowns of these mountains and spill down the hillside. Last year, nearly 30,000 acres burned throughout this range — as bad as it gets, says one ranger — but there’s no sign of damage from this height. Here, above the fray, it’s all about the long view — until it’s time to climb back down.

Fryingpan is one of the easier hikes on the Lookout Tower Challenge, a hiking series organized by the Carolina Mountain Club (CMC) to encourage visits to 26 western towers. Hikes are detailed on the CMC website and in Peter’s book, down to the exit ramp numbers. Bev MacDowell, an experienced hiker who’s climbed 40 peaks 6,000 feet or higher, says the fire towers inspire a special kind of wonder: “It’s like being on the deck of a ship, and you’re looking out over the ocean of clouds and mountains.” The 61-year-old teaching assistant says that trekking Mount Cammerer, an early tower restoration success story, was as tough as any 6,000-footer, but even the short hikes to lookouts are satisfying.

Bev knocked out her first three towers in one day, solo. Pulling off an access road, she’d scramble up to a lookout, check it off her list, and head to the next. Friends joined her on the rest of the Challenge hikes. At Rich Mountain tower near Hot Springs, she and a friend shared a picnic lunch on the cab’s wooden floor. “With the colors of fall right below us,” she says, “it was better than any restaurant.”