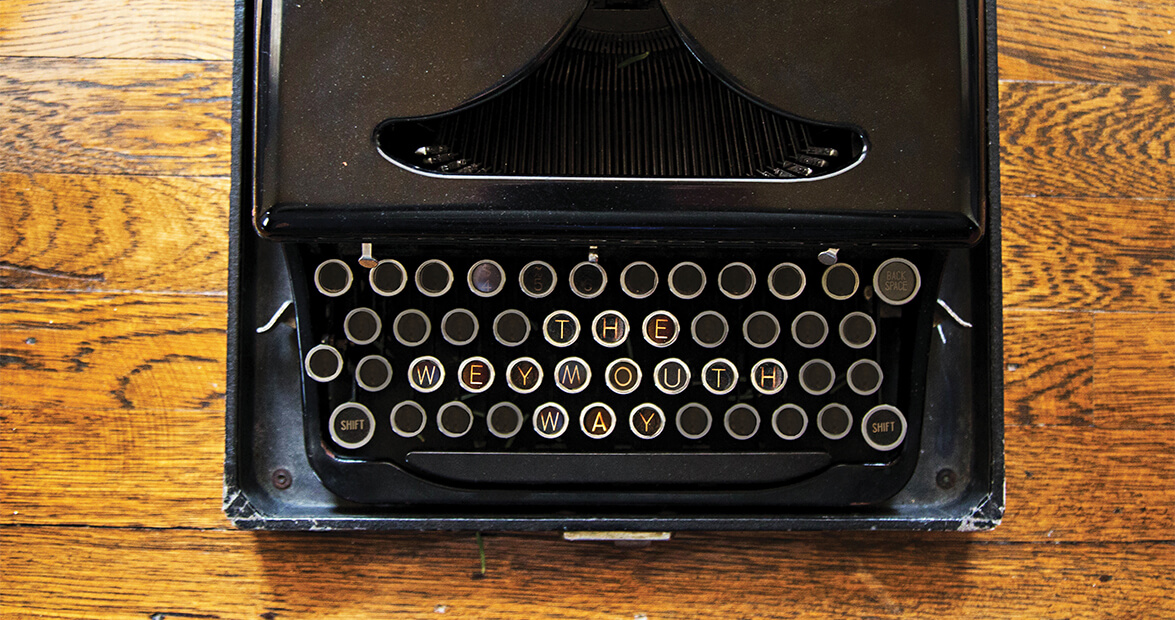 The grounds — the spacious lawn, the pea-pebbled perennial garden, the riding rings and unmown fields — of the Weymouth Center in Southern Pines are eerily quiet but for “the hot pinewinery silence” of the afternoon.

Indulge me. Literary references are endemic to a residency at a writing retreat, a Pavlovian reaction to letting yourself in to a strange place, unaccompanied, the key left under the mat. The phrase is from William Faulkner’s Light in August. In the 400 pages of dense, unparagraphed, unpunctuated prose of Absalom, Absalom!, the character Shreve demands of his Harvard roommate, Quentin Compson: “Why do you hate the south?” “I dont hate it. I dont!” Quentin protests, a bit too much. Poor Quentin. If he’d had a Facebook page, he’d have posted, “It’s complicated.”

“What do they do there? Why do they live there?” Shreve goes on to demand, and though he’s asking about the South, plenty of people are just as mystified by writers’ retreats. I understand this curiosity, as I have similar questions about other places — a convent, say, or an Outward Bound trip — that people voluntarily commit themselves to.

The note with the key informs me that I’ll be staying in the Paul Green room. At Weymouth, bedrooms are named for writers. At my first residency experience, my bedroom/studio was a converted corncrib. Strains of violin music reached me from a nearby studio in another refitted outbuilding, where a composer wrote music. One night, an installation artist invited the other “fellows” to visit her work in progress, which consisted of broken mirrors and crushed Diet Coke cans. “Mom,” my older son said when I described the incense sticks taped to my doorway, “Come home.”

The Weymouth Center for the Arts & Humanities has been a full-fledged cultural center since 1979, with a Chamber Music Series, a Humanities Lecture Series, and the Writers-in-Residence program. More than 600 residencies have taken place here. My room is furnished with a velveteen love seat and a bed and a desk and, of course, bookshelves holding a dictionary, a thesaurus, and copies of Poets & Writers magazine. The old windowpanes are waved, their sashes operated with ropes.

The house is like a warren, or a Nancy Drew mystery setting, with narrow halls and closed doors and sudden stairways. Pen and ink drawings, framed needlepoint and crewel creations, hang on the walls. There are no clocks and few mirrors, for which I will be grateful after days of neglected grooming. A shelf of works penned by writers in residence reminds me that I failed to bring a copy of one of my novels, a long-standing tradition at writers’ retreats. I slink on, opening the random door, feeling like one of the Pevensie children in The Lion, the Witch and the Wardrobe, and stumble into James Boyd’s study. The lovely room, devoted to North Carolina Literary Hall of Fame inductees, makes me feel all kinds of lowly with its photographs of Reynolds Price, Allan Gurganus, and other literati on the walls. Their typewriters and memorabilia are encased (enshrined?) behind glass, and a bronze bust of Sam Ragan, who was poet laureate when the Hall of Fame was founded in 1996, only increases the sense of “Do you see what we’ve accomplished while you’re trolling the Internet?” accusation, and propels me back to my room. 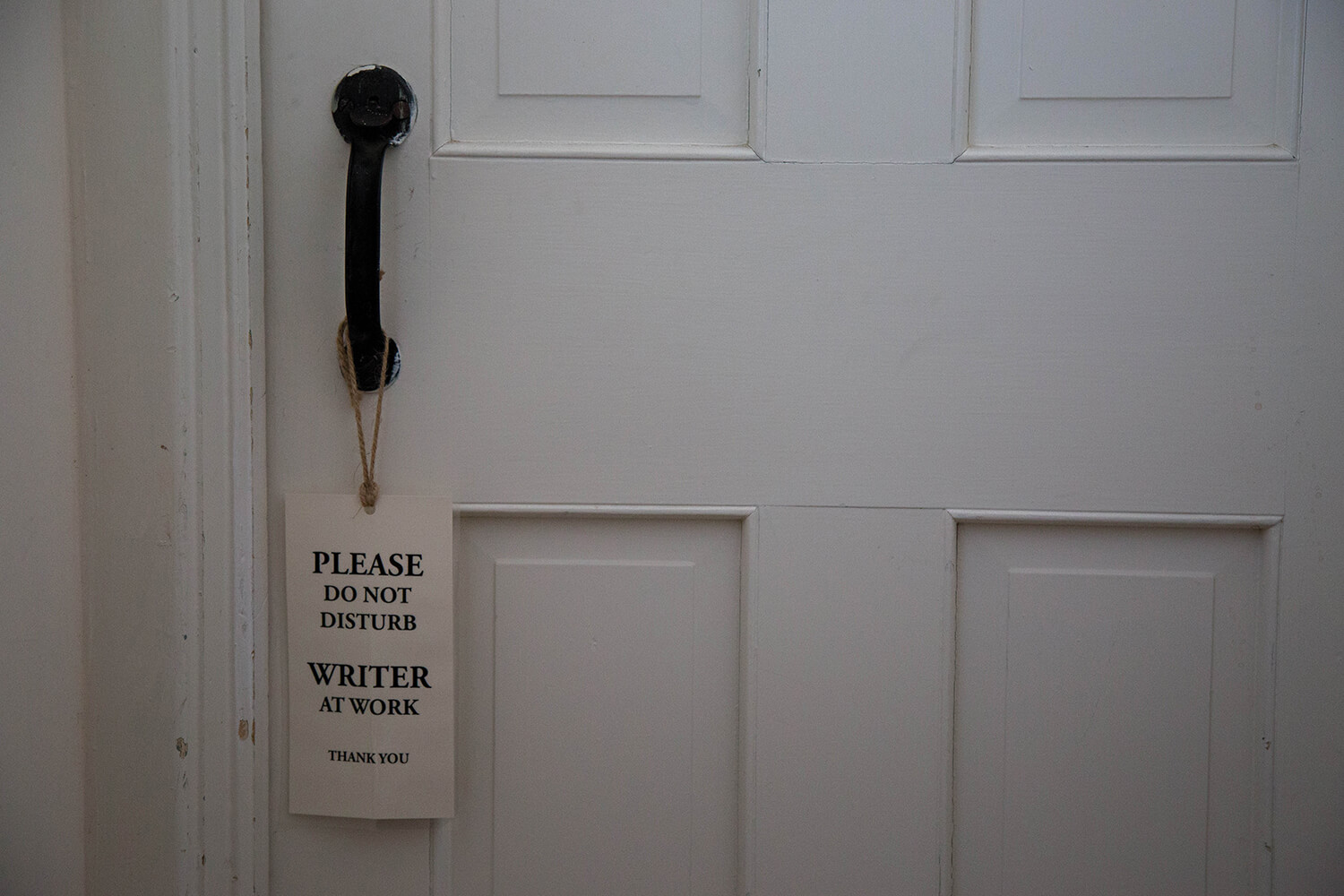 Laminated, politely-worded Do Not Disturb/Writer at Work/Thank You signs dangle from doorknobs, but if writers are thinking or typing away in other rooms, I can’t tell. Weymouth is that silent, as it’s meant to be. And that, I think, is what people can’t quite comprehend about writers’ retreats. You come to write, obviously, but that’s an incomplete answer. You come for the silence. You come for the solitude. Waiting here is the kind of silence and solitude that makes people who need people shudder, but is a writer’s nirvana. Those two requirements are either going to make or break you as a writer. Truman Capote managed to be both solitary and social, but, then again, things ended badly for him. The silence and solitude can drive you to drinkin’, as evidenced by Fitzgerald (who also has a writer’s room named for him at Weymouth), Hemingway, and my main man, Faulkner.

It’s a weighty phrase, “writer in residence.” You can’t just prance into these places. You have to fill out an application, be vetted, be admitted, all that. (For my first residency, elsewhere, the application requested that a writing colleague or instructor vouch, in effect, that I played well with others.) During that retreat, the Oscars ceremony aired, the first time in decades that I’d ever missed the show. There was a television in a common room, but I was afraid of looking superficial if I tuned in. Weymouth is simpler. You bring your own sheets and towels, even your own food. (I unpack a cooler in the kitchen, where glass-fronted shelves hold lots of wineglasses. No surprise.) Weymouth is a pack-in, pack-out kind of place. You make your bed. You fix your meals. Or you don’t.

Here, then, on the desk in my “room of one’s own” (Virginia Woolf), are pages of handwritten notes to be transcribed. Here is a New Yorker magazine in case I need to look at someone else’s words. Here is the list of tasks I’ve set myself to accomplish. It’s long, and unrealistic. “Writing is easy,” author Gene Fowler said. “All you do is stare at a blank sheet of paper until drops of blood form on your forehead.”

People long for time. What, though, if they were given it? Not at home, with their photo albums or yard work or DIY, but in an unfamiliar place in a single room? “I have three entire days alone — three pure rounded pearls,” Woolf also wrote. Weymouth is the ultimate freedom. What is freedom — or peace — but no requirements? A writing residency is a peculiar kind of self-isolation, or voluntary solitary confinement, yet with a peculiar kind of liberty, as well. You don’t have to exercise, dress, bathe, eat, sleep, or be responsible in any way, except to yourself and your work. Your only task is self-discipline, and no one cares if you even do that. Writers apply for residencies for rest, for respite, for inspiration. I come to work, to heedlessly wipe my hands on my shirt, to stay up until 3 a.m. and not feel guilty. It’s divine. If there is a rule, it’s this: You have to be OK with being alone.

At some point in my stay, when I have six computer windows open on six pieces of writing, I go outside to make sure my joints still work. The grounds are lovely, with a culinary herb garden, benches given in memory of people, and ample areas for pondering plot complications or listening to the quiet (good old Rod McKuen). It’s heaven, if you’re into that. You must be into that. From outside, I can see various wings and porches and entrances and brick terraces, and sense that this stately home was much loved, that the Boyds and their three children — a portrait of the family hangs in the foyer —  must have played and laughed and lived wonderfully here. The sign for Weymouth is modest; the driveway is plain gravel. I’ve never aspired to a residency in someplace renowned, like Yaddo. I don’t want to compare notes with famous writers. From outside, I can also see the window to my room, and the open — reproving — computer screen. Back inside, then, over hardwood floors and scatter rugs, past rooms named for Thomas Wolfe and Sherwood Anderson, who were friends of the Boyds, and stayed here as guests. 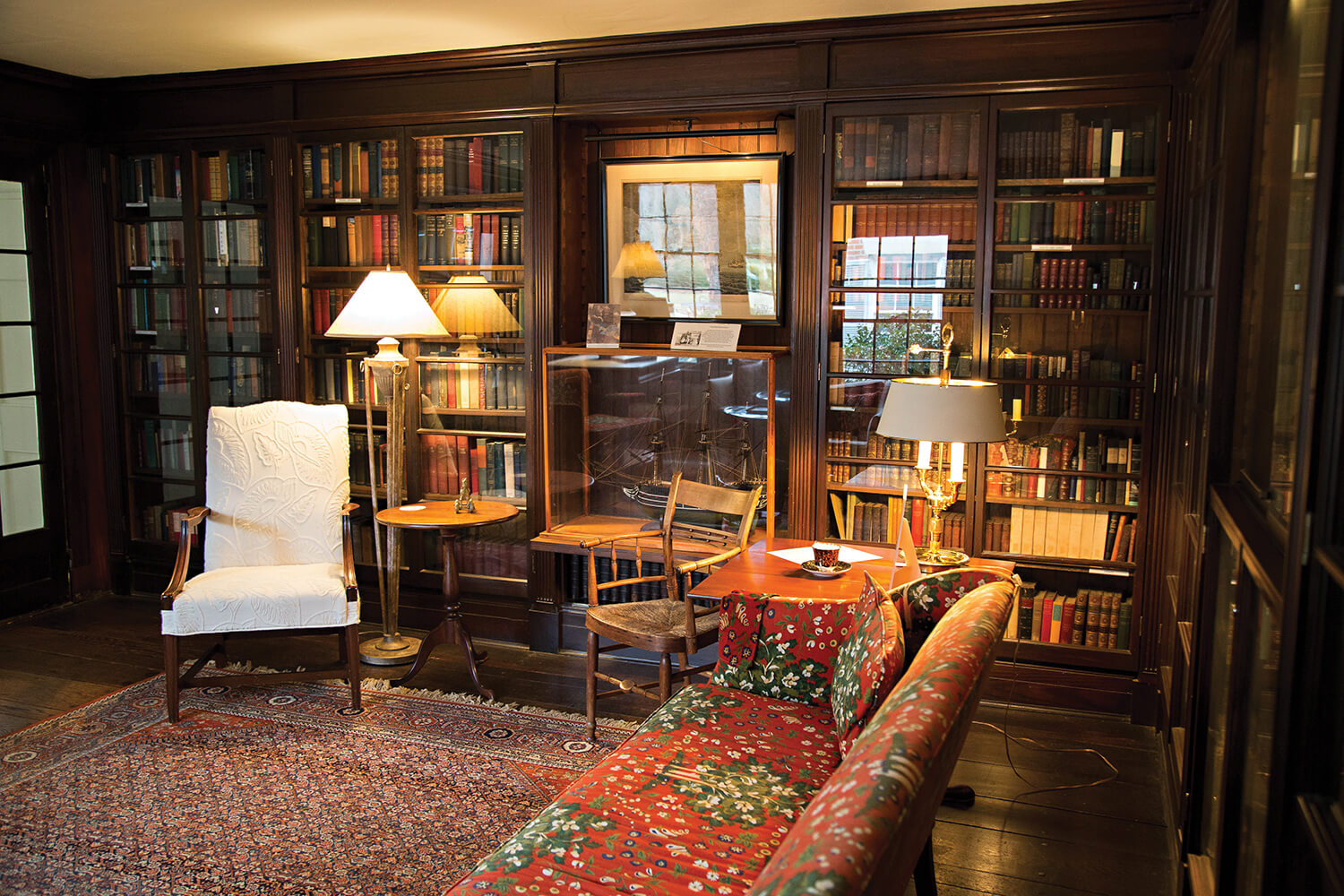 Writers’ retreats have different policies. At Weymouth, writers can reside for up to two weeks every year. My time is up. I’ve fashioned notes into prose and made good headway on two articles. I’ve changed a single word in one piece. (This is writing. If you’re not going to get up in the middle of the night to change “swivel” to “pivot,” you’re not a writer.) I’ve found a separate peace, and not the kind John Knowles wrote about. And though someone’s damp towel hangs in the bathroom, I’ve never crossed paths with a human being. I’ve been, as The Book of Common Prayer prettily states, “unspotted from the world.” All that’s left on the desk are my sunglasses, which have looked out of place for these days, but now represent the world beyond, which I’ll soon — alas, and thank heaven — rejoin. I feel like the main character in a beloved children’s book, The Story of Ferdinand. Ferdinand is a bull who doesn’t want to fight matadors. He just wants to sit alone under the cork tree  and smell the flowers. The last line of the book reads, “He is very happy.”