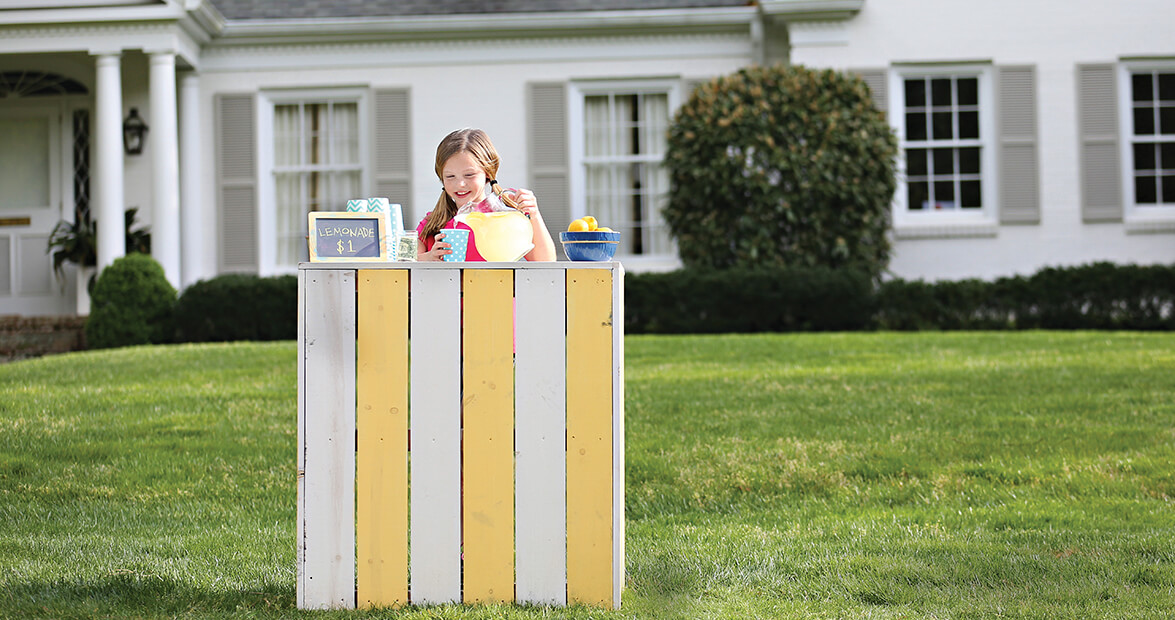 What we’ll need: a table, a sign, at least one child. The purpose, probably: money, such that we might then do, or buy, a thing.

And while we could attempt some manner of high-mindedness here, a lemonade stand is not Girl Scout cookies or Boy Scout popcorn, and so needn’t really be anything other than the fairly efficient transfer of wealth from neighborhood passersby to a child in need of, say, Legos. Or just cash.

But wait, the puzzled child says to the parent: You will front me the funds for lemons and sugar, and you will lend me the big blue pitcher, and then I might sit at the bottom of the driveway and sell paper Dixie cups of lemonade for a dollar? (Is that what lemonade goes for now? A dollar? I have two boys, ages 6 and 3, and we are on the very cusp of lemonade-standing. And while we’re here, good reader, how much, these days, does the tooth fairy pay for a tooth?) Where were we, anyway? Capitalism. Yes, half-imaginary child, I will make unto thee a loan. Friendly terms. And I will drive you to the store. You will make a sign and wish for warm, breezy weather, and between us, we’ll hope for the best.

Years ago, before we had kids, my wife and I used to argue a bit about whether we should have kids. I was on the it’s-hard-to-see-what-trouble-might-come-from-waiting-a-while-longer side of things, which would prove to be the losing argument.

Here is one of the reasons it failed: One warm, breezy afternoon, I was out walking the neighborhood by myself. I passed a child who was somewhere between 8 and 12 years old, sitting behind a table on his front walk. NINJAS, his sign read. His racket: For a fee, he would draw you, as a ninja. I went home, got my dollar, took it back. He let me choose my weapon (I went with “stick,” because it seemed vaguely innocuous) and my color (green; same reason). 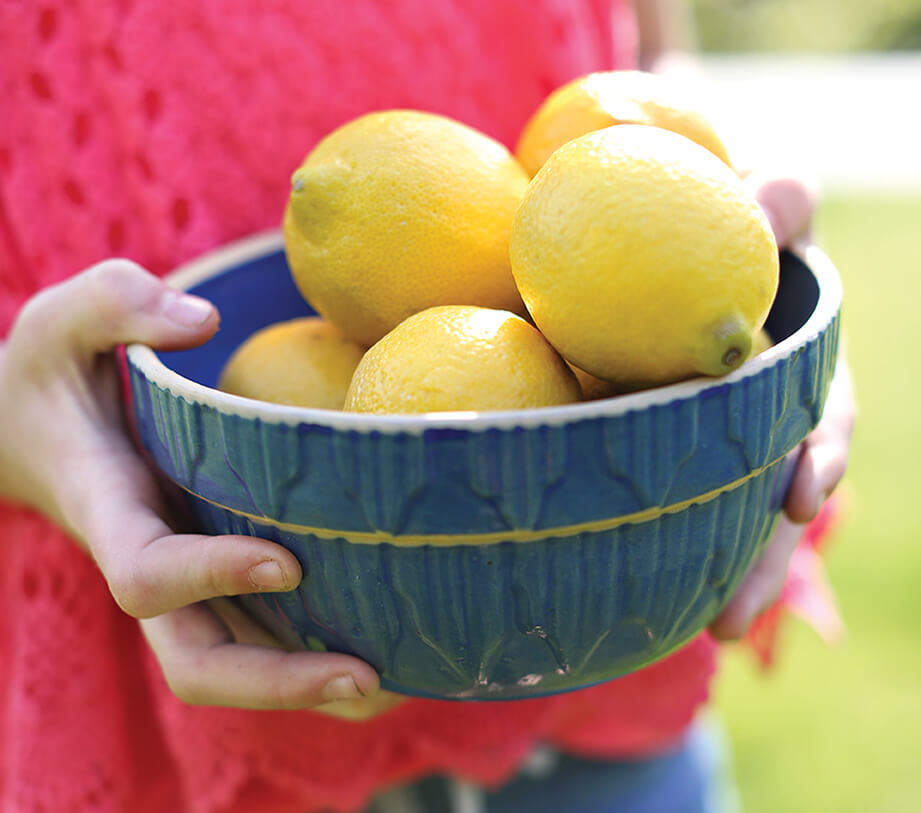 He drew the picture with the concentration of 1,000 warriors, and I confess: My heart broke open a little bit. I still have green-ninja-me in a drawer in the kitchen, the same drawer that holds expired passports and my old dog’s collar and, now, the booties from the hospital trips to birth both our boys. That drawing meant something. I will grant you that it was not from a lemonade stand. It was a personalized-ninja stand. But it was the same idea: For a marginally ridiculous fee, I will sell you something temporal and fleeting. Except that it never, never is.

A lemonade stand — or a NINJA stand — says a handful of things, one of which is: slow down. So you were going somewhere. Now, for even this brief moment, you’re not. Now it’s your dollar headed into the grubby fist of a well-intentioned child, and that child is going to buy junk with it. Celebrate this. You’ve spent your week buying junk, anyway. You buy paper towels and car insurance and four-dollar coffee. Think of the child in the toy store — can we hope for a bookstore? Maybe not, but a lemonade stand is about nothing if not about hope — staring down the aisles of Legos. Or the board games (I know; don’t tell me), the video games, the Frisbees (just let me believe), the dolls and doll accessories and the accessories to the doll accessories. Remember when the great-aunt you didn’t know well would give you a gift card to the record store (record stores!) for Christmas? Remember how that was the best present there was? How it was just money of your own, to do with it what you would? This, in essence, is the lemonade stand. A child gives a day over to the sale of juiced citrus. At the end of that day, the child — at least by her estimation, if things go even vaguely well — is rich.

Lemonade wrought from a powder is a desperate cry for help.

See the lemonade stand in its full glory: The kids are under beach umbrellas that one parent or another has dug from the attic, or perhaps we’ve gone big-time, and we’re using one of those pop-up tent canopies you could once earn from the supermarket by spending however many dollars eight weeks in a row. There’s a table, or at least some upended milk crates. Maybe we’ve got some red or blue gingham going on. A bowl of lemons. The sweating pitcher. The Carolina sun high in the sky.

Rules: If there are two sizes for sale, you must buy the larger size. If the kids are selling the lemonade in plastic cups, they’re doing it wrong, but you’ve got to buy it anyway. Same goes for pink lemonade: Find me a pink lemon. That’s a mix. Lemonade wrought from a powder is a desperate cry for help, but we’ll blame the parents, because we can. If it’s a sibling-type situation, treat the older one with deference, but try to make the transaction with the younger one. She is having a tough day, probably consigned to the labor end of the operation, with the older kid most likely fancying herself the brains.

You’ve already mowed the lawn, or you still have to later on. If you’re on foot, you’re either walking the new dog the kids have been begging you for, or you’re thinking that maybe this is the month you give in. If you’re driving, you’re headed to the store for burgers and buns, or Weed Eater string. You see the children. Not yours. Somebody else’s children. They’re on the corner, shouting Lemonade! Here is the lone commandment: Absent actual emergency or impossibility, you always, always, always stop.

There are two kinds of people in this world: the people who will stop their car in strangers’ driveways and walk back half a block to buy lemonade from other strangers’ kids, and the terrible people. Often enough, though, I fall into this second, terrible category, because as we go whistling into our increasingly cashless future, I increasingly haven’t got any cash. Note to self, then: This season, keep a roll of quarters in the car, or a short, secret stack of dollar bills. I’ll put the money in a film canister (are there still film canisters?) and label the outside NOT MONEY, so as to discourage thieves. In this way, I’ll be ready.

And why, finally, must we stop? Because a lemonade stand, in addition to all the rest of it, is about kids. Even though it takes an adult to explain it and bankroll it and (help) set it up, a lemonade stand is about childhood. The lemonade stand might offer something critical: a chance for the child, once the parent’s gone back inside, to do something almost entirely by herself. To figure it out on her own. To make a sale; to learn one corner of the world without a parent saying much about it. And maybe that’s what we adults are reminded of, standing there, drinking out of a paper cup: that brief moment of truest childhood, when we’re still kids, still need our parents so fiercely and primally, but also need — need — to know that we can be off on our own. To live our very own lives. It’s a kind of freedom maybe not so readily available to kids in these more careful days. All the more reason, then, to keep that money in your car, in your pocket. That’s what you buy when you buy lemonade: Childhood. One piece for them. A piece of yours back. One freshly squeezed sip at a time.

For a grown-up glass of lemonade, get in line at Angie’s Old Fashioned Lemonade stand.

Every summer Sunday afternoon, my best friend and I sold lemonade for 25 cents a cup from a card table beneath a tree on the Rutherfordton public golf course. On a good day, we split as much as $36. Confession: Our lemonade wasn’t made from actual lemons. Our lemonade came from the cylindrical chunk of slurry that plopped out of Minute Maid cans. 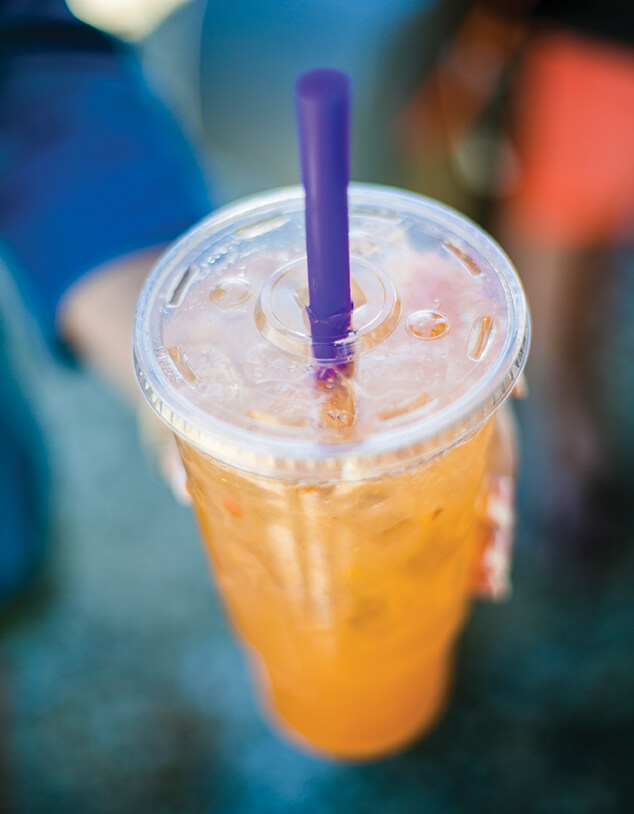 Pity those Sunday golfers of yesteryear, then, who never had the opportunity to taste one of Angie Dean’s lemonades, served up every Saturday and Sunday, April through October, at the Piedmont Triad Farmers Market in Colfax. Or the opportunity to watch Angie create her concoctions from start to finish, one by one, each made to order. On a busy day, Angie will go through 200 lemons with her “beast of a squeezer,” as her husband, Gary, refers to the industrial juicer. Every glass starts with a lemon, then Angie adds her homemade simple syrup and ice, and shakes the ’ade vigorously. An extra-long straw with the circumference of your pinkie ensures sippers don’t miss out on all the citrusy pulp.

If you like, you can ask for a scoop of finely chopped strawberries, mangoes, or peaches, when those fruits are in season. Regardless of the flavor, every glass begins with that whole lemon, Angie’s calling card: Catch a glimpse of someone holding a cup with floating lemon halves, and you’ll be drawn to the stand where thirsty customers are queued up 12 deep, waiting for a cup of real lemonade.
— Susan Stafford Kelly