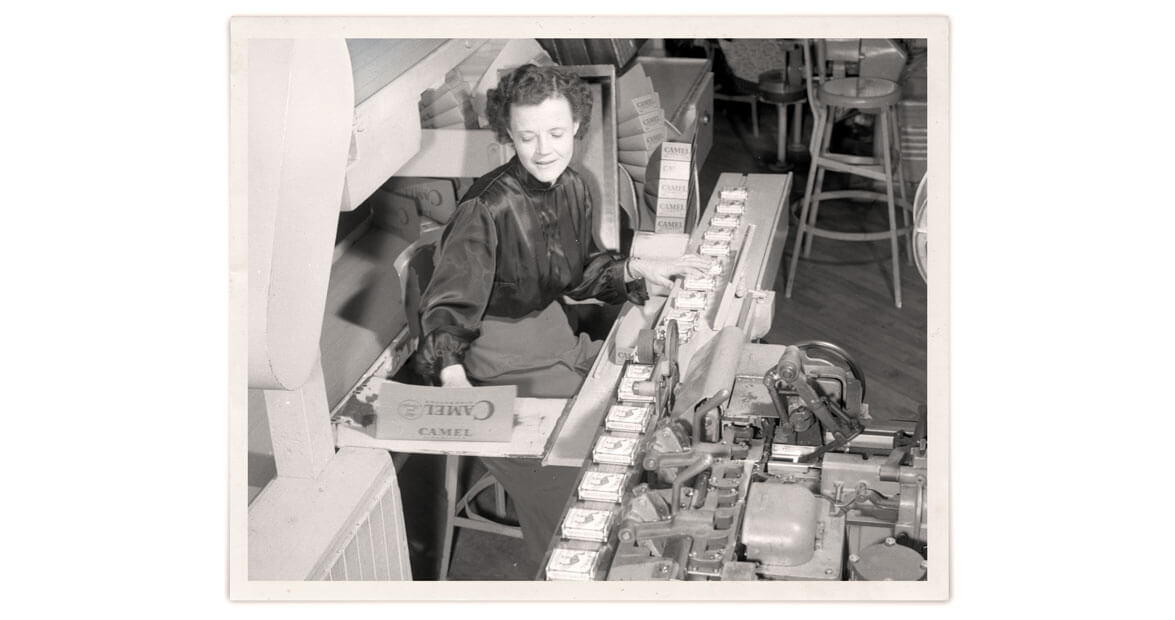 Both of my parents smoked — my father, Winstons, and my mother, Salems, the menthols with a filter tip, because, she said, they were for ladies. When I was old enough to become rebellious (which my parents would have claimed was five minutes after I left the womb), I made it clear that I disliked cigarette smoke, the bitter odor that permeated everything I wore and stung my nose and eyes. One day, when I was a teenager, the haze from my father’s cigarette drifted by me, and I fanned the air and made a disgusted face. With a charming smile and a futile gesture at holding his Winston away, he said, “Smoke follows beauty.”

It was a father telling his awkward teenage daughter that she was beautiful in his eyes, but using a compliment to cover the unpleasant fact that his cigarette smoke offended. The comment was freighted with the same complexities as the place where I grew up, Winston-Salem, the hometown of R.J. Reynolds Tobacco Company since 1875. A town whose identity was so entwined with tobacco that I had to explain to a newcomer that the city wasn’t named after the cigarette brands, but the other way around. My parents, unlike many residents, were neither tobacco farmers nor employees of the company, but the influence of the industry was as commonplace in my life as their ashtrays in the den.

Without tobacco, Winston-Salem might have been just another Piedmont town, fortunate to have railroads but not much else. For generations in North Carolina, tobacco and cigarettes built homes, sent students to colleges (which they also helped establish), funded the arts, and made small towns prosper. It was Reynolds money that relocated Wake Forest University from its namesake home to Winston-Salem. And yet, it’s impossible for most of us to ignore the fact that tobacco and cigarettes have sickened and killed millions of people.

That said, I can still look at the beautiful Art Deco-style Reynolds Building, long a crown jewel of the Winston-Salem skyline, and find the copper tobacco leaf design around the entrance as fascinating as ever. I’ve always loved the building, its shape gracefully piercing the sky, the top lit with red and green lights at Christmastime. I’m grateful that it’s still there, now as a hotel and the home of an elegant restaurant, The Katharine Brasserie, named after R.J.’s wife. It’s easy to forget, sitting at the charming bar, that this was the headquarters of our tobacco past. 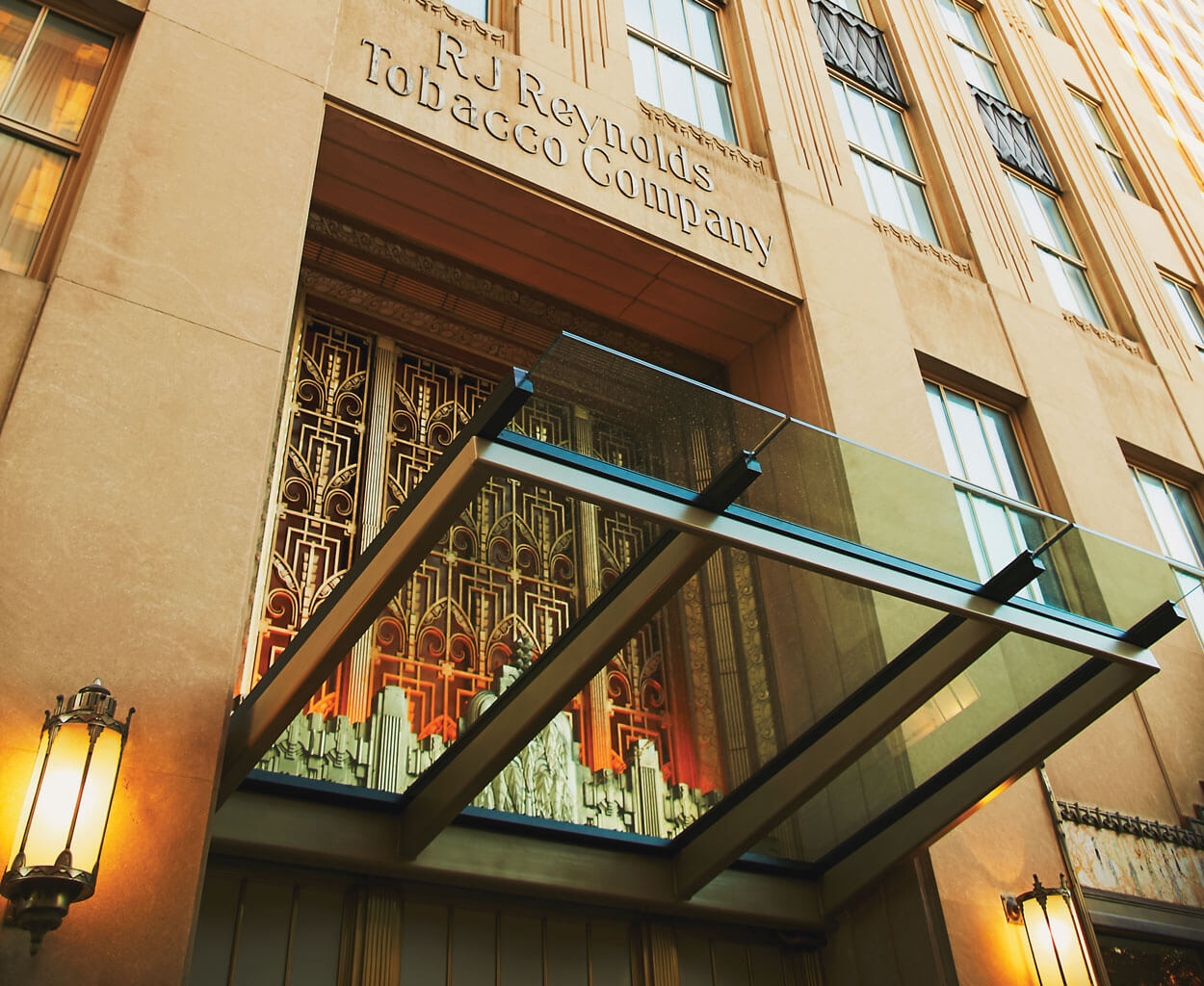 Designed by the same firm that built the Empire State Building, the R.J. Reynolds Company headquarters became the centerpiece of the Winston-Salem skyline when it was completed in 1929. Now, it houses the Kimpton Cardinal Hotel and The Katharine Brasserie & Bar. photograph by Stacey Van Berkel

I started learning about that heritage on elementary school field trips. One year, teachers took us to a tobacco farm, where we fidgeted in the hot sun as a farmer explained how the broad leaves grew and Bobby Costner tried to put a hideous tobacco hornworm down the back of my shirt. The next year, we visited a tobacco auction, and I was entranced by the mystery and music of it: the auctioneer chanting in what sounded like a foreign language; men in suits merely raising a finger to make a purchase; the stacks of leaves no longer green but aged to a golden brown. The scent of cured tobacco was rich, spicy, and sweet. Nothing like a burning cigarette. The whole town seemed to be wrapped in this pleasant perfume every fall as I rode home from school past rows of tobacco warehouses.

Our fifth-grade trip was to the cigarette factory at Whitaker Park, which at night had changing colored lights on the fountains. At the end of the tour, after seeing thousands of white tubes traveling up, down, and over conveyor belts like people on roller coasters, we were given free cigarettes.

I followed my parents’ firm instructions to take only the Winstons and Salems for them, not what my mother called “those nasty Camels.” Today, people gasp when I tell this story — preteens given handfuls of cigarettes! But it was the 1960s in a town that tobacco built. Smoking was everywhere. And even kids were well acquainted with the industry’s rhythms: If their families farmed tobacco, children helped bring in the crop — and received excused absences from school to do so. Once, I told two farmers’ kids that they were lucky to be able to skip, and they replied grimly, “I bet you’ve never pulled tobacco.”

The scent of cured tobacco was rich, spicy, and sweet. Nothing like a burning cigarette.

My city high school was built in 1923, using land and money provided by the Reynolds family and named for the company founder, Richard J. Reynolds. It had a smoking pit for students, a sunken brick area outside the cafeteria, which filled up every lunch period. A bored teacher monitored it to detect the aroma of anything that wasn’t tobacco. This was the mid-1970s, and most high schools had designated smoking areas. “They thought it would cut down on smoking in the bathrooms,” recalls a friend who attended RJR’s rival, Mount Tabor.

Over the years, as science began to reveal that cigarettes are lethal, bans on smoking in public places started to pop up around the state — except, notably, in Winston-Salem. My mother bristled at the restrictions: not as a matter of loyalty to the hometown company, but as a threat to her personal freedom. While visiting me in Raleigh, where many stores and restaurants had banned smoking before statewide legislation in 2010, she and I stopped to pick up a few things at a grocery store. She did what she always did — light up. People glared. I whispered admonishments. She glared back, threw her cigarette on the floor with a flourish, and stomped it. Then she complained in the car all the way to my house, where, she reiterated, she wasn’t allowed to smoke, either. The first time my mother and I went to her favorite Winston-Salem restaurant after the legislation went into effect and she couldn’t puff her Salem, I inwardly cheered. 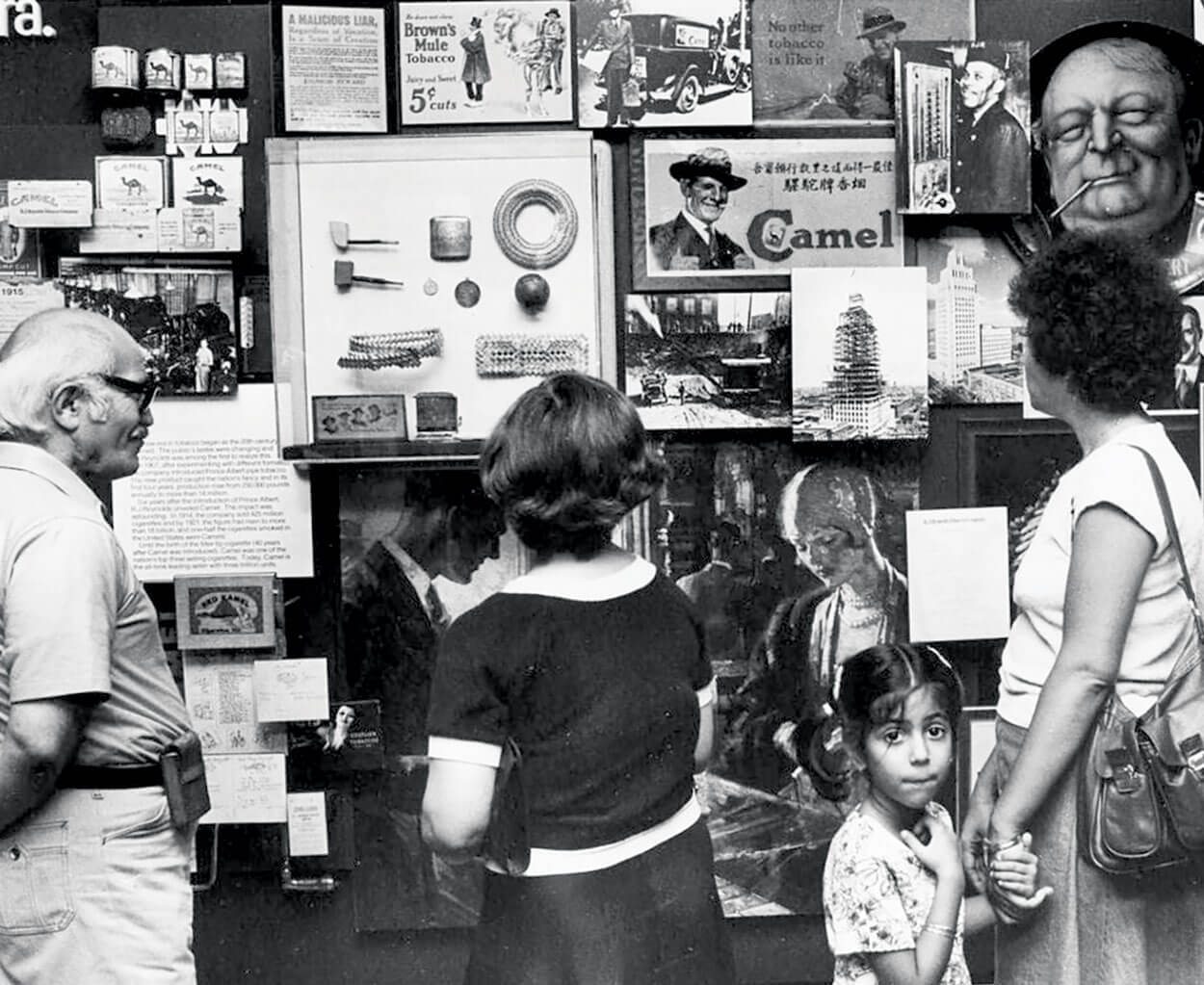 An industry town: Visitors and school groups often toured exhibits of North Carolina tobacco memorabilia, like this one in Winston-Salem in August 1978. photograph by WINSTON-SALEM JOURNAL

People used to smoke to be rebellious. I rebelled by not smoking. I don’t let people smoke in my house or car, although I broke that rule one time. My father had died suddenly, at 68, from a massive heart attack, and I was driving my mother to a funeral home to make arrangements. I knew that if she had ever needed a cigarette, she needed one then. I pushed the button to roll down her window an inch or two. “Go ahead,” I said. She lit up a Salem in silence.

A decade later, she died from emphysema that was fueled by chain-smoking, which had turned the walls of her living room from cream to brown.

I don’t get back to Winston-Salem often, but recently I went to Reynolda House, the Reynolds family manse built in 1917, which is now an art museum, to see an exhibit. As I drove through the grounds, I remembered the spring days that my high school friends and I spent in the gardens there, walking beneath the weeping cherry trees and sprawling on the grassy lawn in deep conversation. I still have a photo from one of those afternoons, snapped with my trusty Instamatic, of blue sky through pink blossoms. So much beauty built from clouds of smoke.