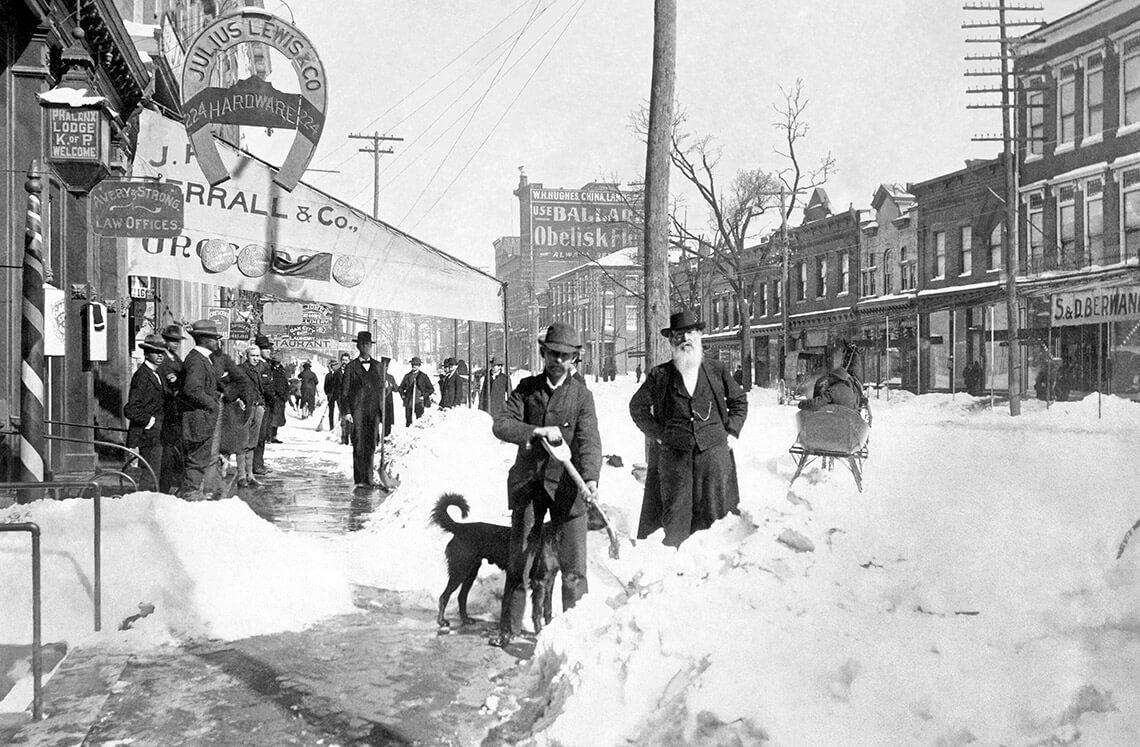 In cities and towns across the state, an unexpected blanket of snow, like the more than 17 inches that fell on Raleigh in 1899, can create memorable headaches. Photography courtesy of North Carolina Museum of History

In most parts of North Carolina, winter comes and goes with humdrum snowfall totals, if any at all. It snows a little, schools close, newscasts kick into hyperdrive, and we’re all back to normal when it’s 60 degrees the following day. Every once in a while, though, we get a solid walloping that folks talk about for decades to come.

March is when the South shakes off the doldrums and gears up for spring. But the tumult in the atmosphere above usually has other plans. Warming temperatures clashing with winter’s stubborn chill leads to an active jet stream that often spins up winter storms with a fury.

North Carolina saw that kind of pattern in abundance in March 1960. It was downright cold for the first half of the month — highs that would typically soar into the 50s and 60s during a normal March struggled to climb out of the 30s and 40s in Charlotte. Not only that, but the frigid air allowed snowstorm after snowstorm to roll over the state.

Charlotte saw three measurable snowfalls that March. Eight inches of snow fell on March 2, with an inch and a half more the following day. Another storm exactly one week later dropped nearly eight more inches of snow. The city saw another two inches a couple of days later.

The three storms totaled 19.3 inches of snow, making for Charlotte’s snowiest month on record — a milestone that still stands today. The airport officially reported snow on the ground for 12 days in a row, a feat that’s difficult to achieve even in the heart of winter.

A dreaded polar vortex sent a bitter chill spilling across much of North Carolina to begin March 1980. In the Northern Hemisphere, a polar vortex is a persistent upper-level circulation over the Arctic that generally keeps frigid air confined to far northern latitudes. When that circulation is disrupted, Arctic air can invade as far south as the Gulf of Mexico.

A lobe of the polar vortex swept over the Eastern United States on March 2, 1980, allowing a powerful nor’easter to develop just off the North Carolina coast. The upper-level trough, combined with the jet stream, pulled an immense amount of air up and away from the surface, causing the newborn nor’easter to rapidly intensify as heavy snow began to fall across eastern North Carolina.

Working with plenty of very cold air, the storm dumped more than a foot of snow over much of the eastern half of the state. Parts of Carteret County saw up to 30 inches of snow. The storm grew so intense that thundersnow was observed over the Outer Banks, according to the National Weather Service office in Newport/Morehead City. 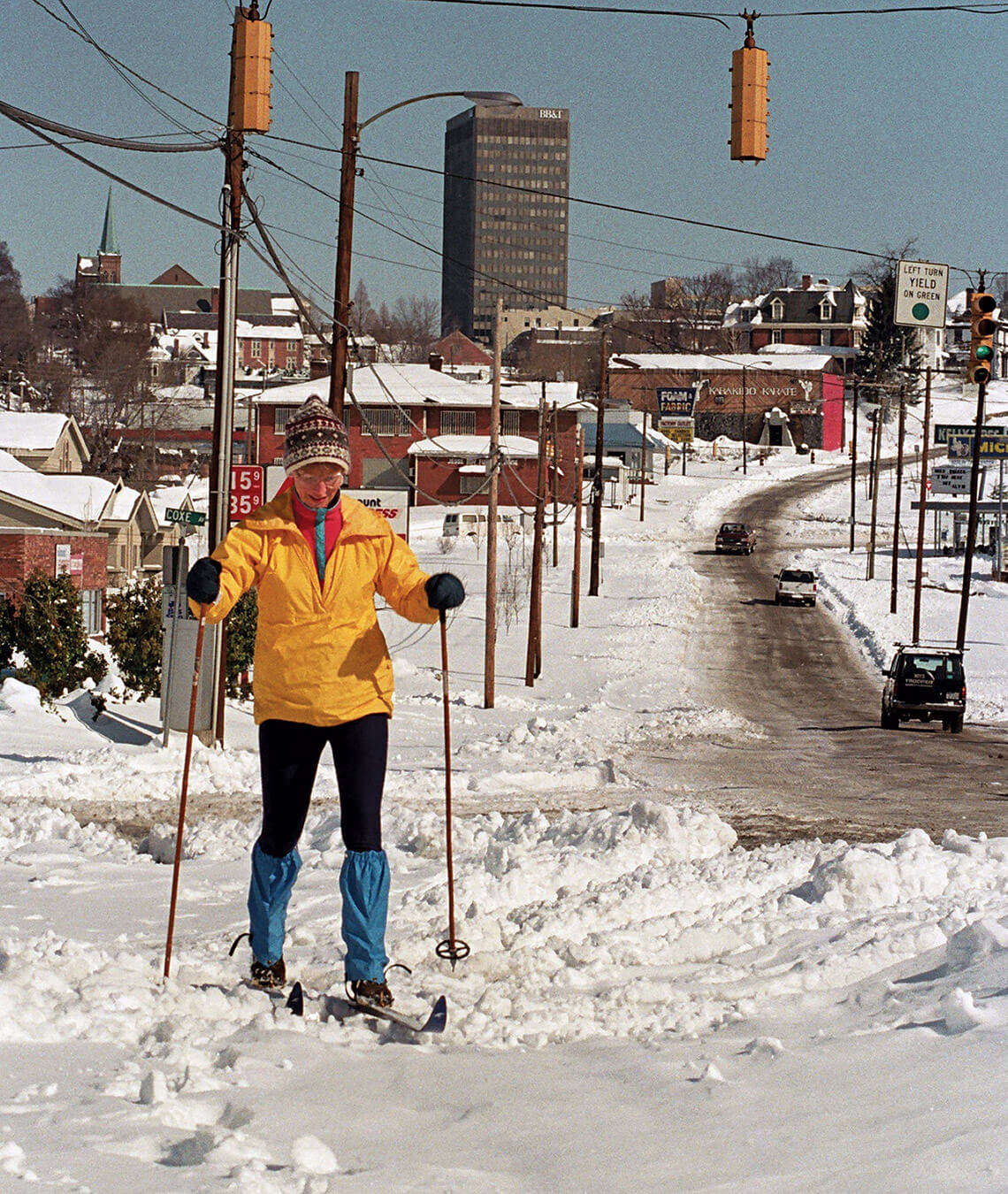 After more than 18 inches of snow shut down Asheville in 1993, essential workers, like nurse Pegi O’Hagan, resorted to skis to get to work. photograph by © CITIZEN-TIMES-USA TODAY NETWORK

March 1993
The Superstorm That Pummeled the Appalachians

Few events represent the power of the changing seasons more than the 1993 Superstorm, an immense system that brought a generational snowstorm to much of the Eastern United States.

The system roared into the northern Gulf Coast on March 12, 1993, with the ferocity of a hurricane, generating a mammoth storm surge on the Florida Panhandle while unleashing nearly a dozen tornadoes in the rest of the state. The cold side of the storm was something for the record books: Snow fell as far south as New Orleans.

Heavy snow began to fall over western North Carolina as the storm approached the region. Blizzard warnings were hoisted for much of the state as intense winds whipped even tiny amounts of snow into a whiteout. The mountains bore the brunt of the storm. Mount Mitchell recorded 50 inches of snow — just over four feet! — by the time the skies cleared out, while Asheville saw just over a foot and a half.

One relatively recent snowfall dug its place in history not just because of the incredible heaps of snow it left behind, but also because it came as a surprise in an era when storms no longer sneak up on us.

A classic nor’easter developed over the Carolinas on January 24, 2000, slowly winding its way up the East Coast over the following two days. The storm left behind a thick blanket of snow from South Carolina to Quebec, Canada, with the heaviest accumulations falling along a swath that stretched from Fayetteville to Baltimore, Maryland.

The storm turned out to be Raleigh’s largest snowstorm in living memory, dropping just over 20 inches of snow at Raleigh-Durham International Airport. It was also only the second time since the 1940s that the city saw more than a foot of snow in one shot.

Perhaps overshadowing the historic nature of the snowfall was the historic miss in many of the forecasts leading up to the storm. Computer models either handled the event poorly or were disbelieved by forecasters. Some models showed a weak storm with little to no accumulation, while others showed only a modest coating of snow. 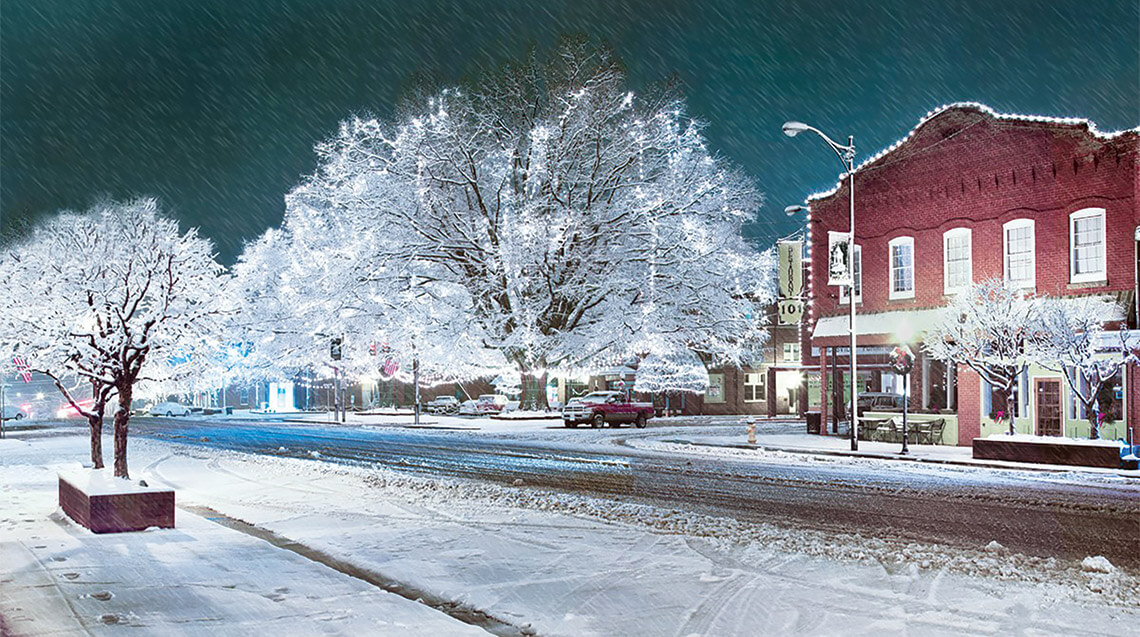 In 2010, Mocksville’s Court Square — along with most of North Carolina — received a chilly Christmas present: a daylong snow and a winter wonderland. photograph by TOM MCCULLOH

Just about everyone who grows up in North Carolina can only ever dream of a white Christmas. It’s exceptionally rare to see snow here on December 25. But a fast-moving winter storm brought nearly every square inch of the state at least a little bit of snowfall on Christmas Day in 2010.

The system trekked eastward across the Carolinas during the day on Christmas, with snow beginning in the morning in the mountains and during the afternoon and evening hours toward the Triad and Triangle.

Most mountain communities saw at least a foot of snow, while the rest of the state (save for the immediate coast) saw a solid five to 10 inches by the end of the storm. Charlotte recorded its first-ever measurable snow on Christmas since records began at the airport in 1939. Greensboro saw its first Christmas snowfall since the 1960s, and Raleigh got its second one on record since a slight dusting back in 1947.

Not all winter storms provide us with a picturesque wonderland.

Ice storms are endemic to central North Carolina because of a phenomenon known as cold air damming. Cold air is dense and hangs low to the surface. When an approaching storm pulls chilly air into North Carolina, the colder, denser air tends to press up against the mountains but can’t flow up and over the other side. This creates a large, shallow pool of cold air across the Piedmont.

All it takes is a thin layer of warmer air sliding over that subfreezing air at the surface to create freezing rain and sleet. That’s why so many winter storms around these parts turn into a sloppy disappointment for snow lovers.

Ice storms are bad news for motorists and pedestrians, and some are so prolific that they also wreak havoc on the power grid. Tens of thousands of folks spent Valentine’s Day in the dark in 2021 after an ice storm left behind up to half an inch of solid ice on trees and power lines across the Piedmont. The northern Triad saw the worst of the storm, with some residents losing electricity for up to a week. The icy mess was a reminder that in the South, it doesn’t take much for a winter storm to leave a lasting impression.