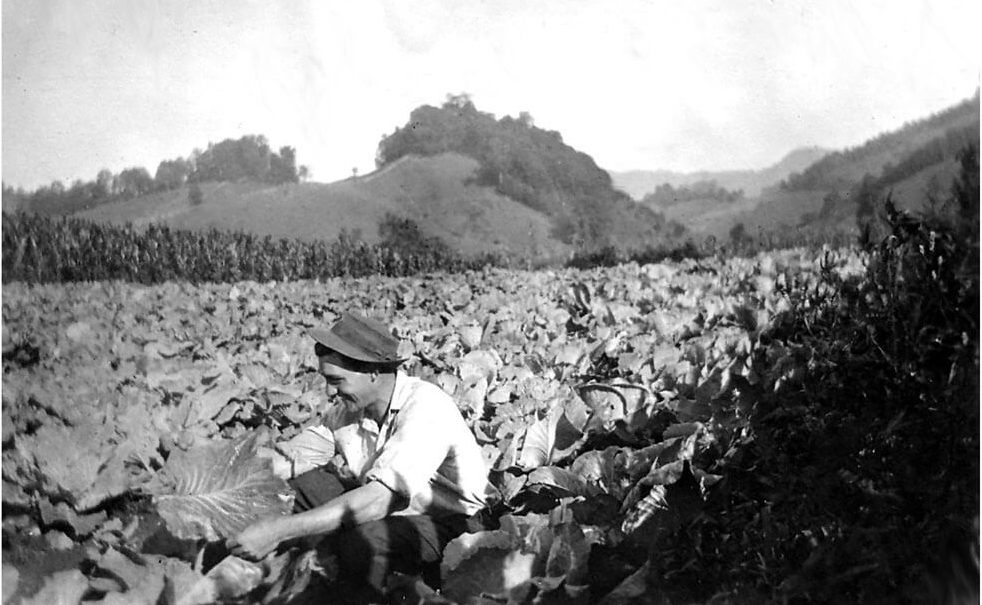 When someone asks me what crop speaks to me most dearly of Watauga County, my Blue Ridge Mountain homeplace, there’s no question it’s cabbage. Good old green cabbage. For several generations on both sides, my people farmed cabbage. A few of my cousins still do. I’ve never grown a head of cabbage in my life — although heaven knows I’ve cooked and eaten plenty — and yet the devotion seems to be in my DNA. There’s an old folk tale that says that new babies are found under cabbage leaves, perhaps in places too far inland for any poor stork to fly, and although I was young when I figured out that wasn’t factual, it always sounded like an auspicious start for any mountain child.

When I think of cabbage, I recall one of my earliest memories: I am a tiny barefoot girl standing in dense, damp, dark earth that looks like crumbled chocolate cake, the kind of topsoil found in the rich bottomland that straddles the New River and nestles into the hollers, the kind of soil and climate that’s the promised land for a cabbage. Ahead of me, parallel rows of cabbage stretch as far as I can see. I now think of those cabbages as thumbtacks, with their taproots sunk into the earth, holding the very ground in place so that it wouldn’t slide off the side of the mountain or slip over the bank into the river. I moved down off those mountains four decades ago, but the thought of my family’s cabbage patches still serves as my placeholder, ensuring that part of my past won’t be swept away and lost either.

Cabbage was an essential crop for mountain families, both for gardeners who hoped to grow all they could eat and farmers who hoped to sell all they could grow. Some were truck farmers, either investing in their own truck or selling their harvest to large trucking companies that hauled and sold Watauga County cabbage across the country. When I was growing up in Boone, few days passed when I didn’t see a fleet of Hollar & Greene Produce Company trucks headed down the mountain. Each one of their cabbage-green 18-wheelers sported a bumper sticker or license plate frame that read, “Eat Mo’ Cabbage.”

Not all Watauga County cabbage was carted off and sold, of course. Plenty of it wound up on family kitchen tables year-round. Cabbage, the hunkiest member of its botanical family — Brassica oleracea — serves as fresh produce throughout its growing season: raw in slaws, pickled in chowchow, or cooked, such as in a skillet of fried cabbage to eat with cornbread. But one of the utilities of cabbage is that it also keeps well after harvest, which is imperative in a place where families had to be more concerned with what they’d eat through the barren winter than what was for supper on a summer evening.

I’ve never grown a head of cabbage in my life, and yet my devotion seems to be in my DNA.

Many a kept Watauga County cabbage has wound up as sauerkraut, which will stay good for months and, according to fermentation enthusiasts, makes cabbage even better for our digestion. The lacto-fermentation process requires nothing more than shredded cabbage, water, salt, time, and know-how. And, if you believe what many mountain people swear matters most, you’ll also need a copy of an almanac or an old-timey wall calendar that includes the dates of “the signs,” which are phases of the sun, moon, and stars. The terms used for the signs and their location in the sky are the same words used for parts of the body and astrological signs, which can make this system sound suspect, little more than folklore and superstition. But those who trusted the signs — and some of us still do — used them to guide the timing of certain tasks on a farm, such as planting, harvesting, and preserving food.

According to the signs, the optimal time to start a batch of sauerkraut (so that the cabbage will properly ferment) is when the signs are above the waist, preferably in the head. One expert mountain cook once warned me: “If you try when the signs are in the legs, it’ll smell like dirty feet.”

To be sure, not all kraut was made by the signs, and not all of it was made in home kitchens and packed into Mason jars. For nearly 60 years, there was a huge sauerkraut factory in downtown Boone, right on King Street, in the area that locals called “the upper end of town.” In the early 1920s, a group of local businessmen and farmers combined forces and formed a cooperative that raised money to build and equip a factory, which would later become the North State Canning Company. The factory provided local jobs, a guaranteed market for cabbage farmers, and local revenue. Farmers signed contracts with the canning company each year and were furnished with seeds for the preferred variety of cabbage. By 1923, the workers were churning out some 15,000 cans of kraut per day.

Cans of Watauga Chopped Kraut were shipped to stores all over the South. The company also sold sauerkraut juice, touted as a healthy beverage that could stave off head colds and cure hangovers. Some people recall making a sauerkraut juice and tomato juice concoction called Watauga Cocktail, using a recipe developed with help from NC State. By the early 1970s, the factory was producing nearly 3,000 tons of kraut per year, canning 24,000 cases per day. But supply tapered off quickly after a devastating fungal disease took a heavy toll on local cabbage production. I daresay that demand for sauerkraut had dimmed as well. This was years before anyone could have imagined that fermented foods would be all the rage in 2019.

The facility closed sometime in the early ’80s. The memory of its once-vibrant role in the community has faded, but many in town still remember how the brine and refuse from the factory were dumped directly into Boone Creek, which ran behind the building. The smell was so pungent that people started calling it Kraut Creek. The name stuck. Certainly the acreage of Watauga County cabbage has shrunk over the years, but cabbage is still holding family land — and traditional ways — in place, at least in some small way. And as for me and mine, we’ll always eat mo’ cabbage.

For a simple supper, quarter, core, and shred a small green cabbage. You’ll have about 8 cups.

Cook 3 ounces of chopped bacon in a large skillet until crisp, then lift it out with a slotted spoon to drain.

Stir the cabbage into the bacon drippings, add a teaspoon of salt, and toss with tongs until the cabbage starts to wilt. Cover and cook until tender, stirring often and adding a splash of water if it’s dry. Just before serving, stir the bacon back in.

Season with salt, a big spoonful of apple cider vinegar, a small spoonful of sugar, and a lot of black pepper. 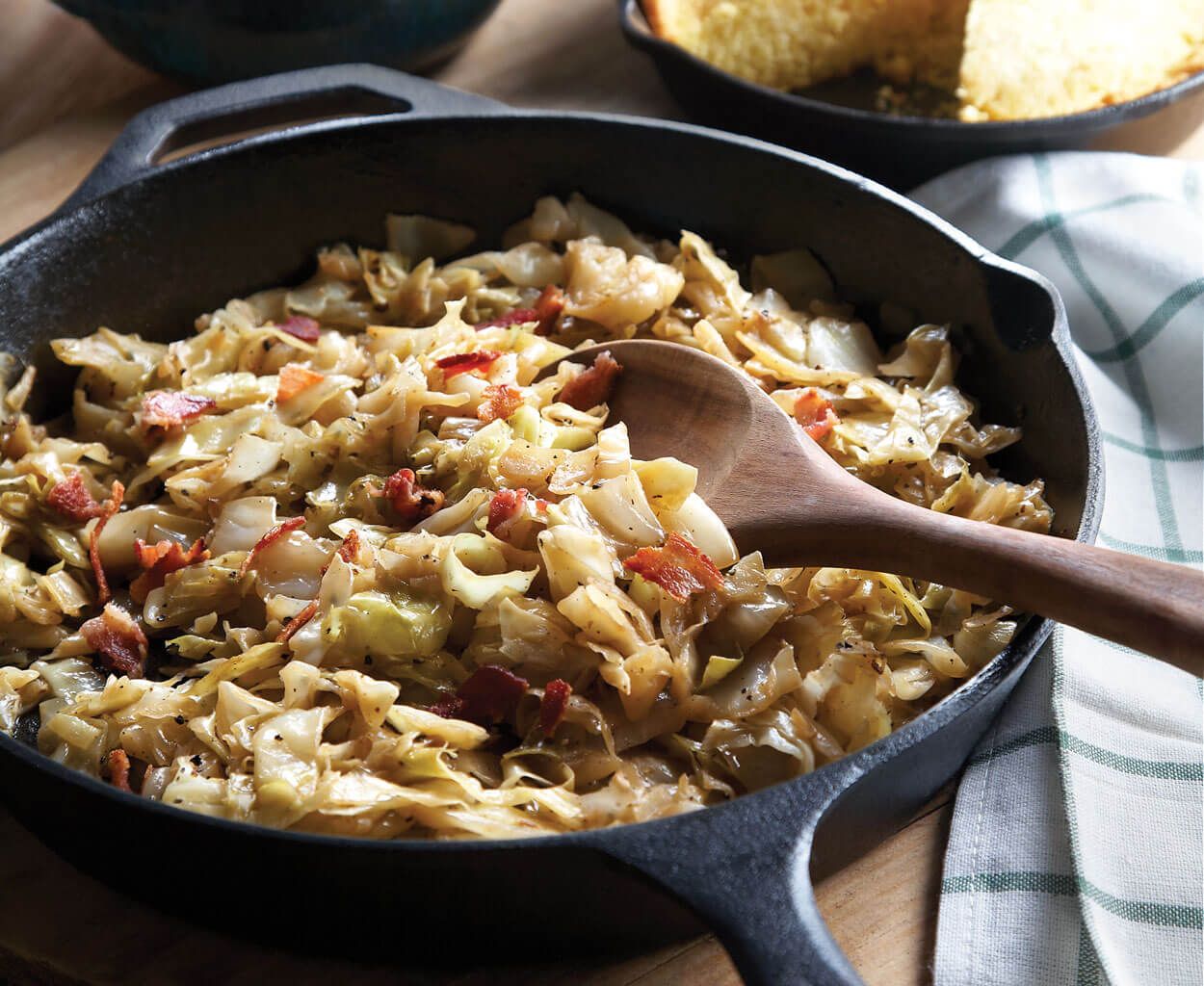 An easy skillet cabbage recipe for a simple supper. photograph by Matt Hulsman