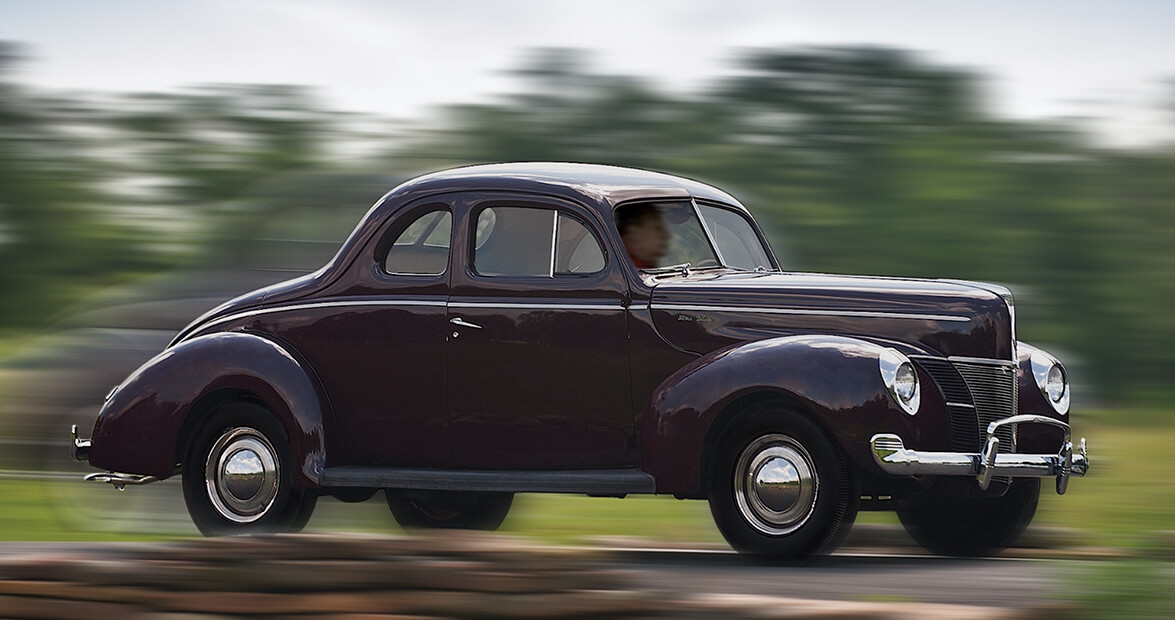 They are lonely roads, strung between the cities of the Piedmont, running for secret miles through the countryside of Wilkes, Davie, and Davidson counties. Nowadays, their hard turns have been gentled, their dips and heaves ironed out. But they remain narrow, following the contours of the land between ridges.

Imagine how it was: In the deep mountain darkness of a warm night soon after the war, say 1947, a black car speeds along U.S. Route 64 east of Mocksville, headed toward Lexington. The designation of “U.S. Route” is a grandiose one for a blacktop strip barely wide enough for two lanes of traffic.

The car is a 1940 Ford Deluxe Coupe, all sleek curves and running boards. It rides heavy and fast, its trunk and backseat packed full of 22 six-gallon cases of white lightning — more than half a ton of the best moonshine whiskey in the state.

The kid behind the wheel is just 16, but he’s been driving since he was 8. He used to take the family car out on the dirt road that connects their farm to the highway, “acting the monkey” with it, practicing a move he will become famous for: the bootleg turn. Cut sharply left, gear down into second, stomp the gas. The car spins 180 degrees, and suddenly it’s speeding back where it came from.

The kid is Robert Glenn Johnson Jr., named after his father. Everybody calls him just plain Junior. For as long as he can remember, Junior’s had the one quality he can count on when the chips are down: nerve. It’s not something you learn, it’s just inside you, and the more you use it, the more you’ve got.

Nerve is something you need when you’re outrunning revenuers from the Alcohol Tax Unit of the Treasury. The ATU men know the Johnson family well. In 1935, they raided Robert Johnson Sr.’s farm at Ingle Hollow, north of Wilkesboro, and seized the biggest haul in U.S. history: four copper condensers, four and a half tons of sugar, 7,000 gallons of white whiskey, five stills capable of turning out 2,000 gallons a week.

It shouldn’t have come as any surprise. Through the 1940s, the revenuers count Wilkes County as one of four moonshine capitals of the country, turning out half a million gallons per year of untaxed whiskey. Moonshine is not just the biggest cash crop in the county. It’s the biggest industry, period.

After the bust, Junior’s father was hauled off to prison. Now, Junior Johnson has no intention of going to prison for making and driving whiskey. His immediate worry is the stretch of road coming up. Once he crosses State Road 801, he’s entered a trap, and he knows it. For eight miles, between that intersection and the Yadkin River, he’ll have no escape route if the law blocks the road ahead. He races toward the bridge, and sure enough, a sheriff’s car is parked sideways, blocking both lanes. In the rearview mirror, he sees two pairs of headlights closing in. Now it’s time for a move, a trick, and a lot of nerve.

He gets as far to the right as he can, shifts into second gear while he turns the wheel sharply left and punches the accelerator. The Ford slides around, squealing, and now Junior Johnson is flying back the way he came, toward the two cars coming head-on, side by side.

Just as the headlights seem to be right on top of him, at the very last second, the two revenuers’ cars break to opposite sides. Junior’s shooting through the space between them and in seconds is too far past them to see, and the road in his headlights is clear.

Half a century later, the moonshiners are mostly gone, and Junior Johnson’s skill as a driver has made him a NASCAR legend.

I’m driving U.S. 64 in daylight, homeward bound from a visit with Junior at Piedmont Distillers in Madison, which produces legal whiskey with his name on it. With Junior’s soft drawl still in my head, I round the last bend and drop toward the river. I can almost see his black Ford beating me to the bridge.